Present study was conducted to investigate the growth parameters, length-weight relationship and different mortality rates of the population Ilisha filigera, the big eye shad from south-east coast of Bangladesh. From January 2013 to December 2014, a total of 852 individuals (both sex together) of fish specimens were collected and the respective analysis was done by using FAO-ICLARM stock assessment tools (FiSAT-II). The von Bertalanffy growth parameters, the asymptotic length L∞ (cm) and the growth constant K (year-1), were found to be 42.80 and 0.88, respectively. The growth performance index (Ø?) was found to be 3.207. The total length and body weight (L-W) relationship was found as W=0.116 L2.205, indicating that the growth rate showed negative allometric pattern (b=2.205<3) with a coefficient of determination (r2) value of 0.979. The annual fishing morality rate (F) was 1.04, whereas the natural mortality rate M (1.49) was comparatively higher than the fishing mortality. The obtained value of the exploitation rate (E=0.41) indicated that the said population was not in over-exploited condition.

Ilisha filigera (Valenciennes, 1847), the big eye shad is commonly known as ‘Chowkkha Ilish’ in the coastal area of Bangladesh. It is a pelagic fish species belongs to family clupeiformes and mostly found in clear water in the sandy and weedy grounds along the coast and also in lower estuaries (Mustafa, 1999). The distribution of the fish species found up to 100 m in depth from the coast line and found to tolerate a wide range of salinity (5-38 ppt). At the upper coast of the Bay of Bengal, it is caught by trawl nets, estuarine set bag nets (ESBN), marine set bag nets (MSBN) and beach seine nets. It is also found to appear from Indian coast to New Guinea and to the South China Sea (Rashid et al., 2007).

I. filigera, one of the most commercially important fish species of Bangladesh coast is of delicious taste and high market price. Besides these, it is classified as long lived species among the family Clupiformes. To estimate the status of the demersal fishery resources of Bangladesh by trawl net survey during 1984-86 revealed that this species contributed to 0.44% of demersal fish catch (Khan et al., 2003).

To meet up the demand of the growing population of the country, fishing intensity is increasing very rapidly in the coast of Bangladesh rather considering the ideal situation of the stock and there is no recent research about the population dynamics of the species I. filigera. Therefore, the objectives of the present study was to estimate the growth parameters and mortality rates with the establishment of length-weight relationship of I. filigera, which will ultimately help to assess the stock status for sustainable management of this species in south-east coast of Bangladesh.

The relationship between body weight and length of the fish expressed as the equation given by Le Cren (1951) as:

Length-Weight Relationship was established using the logtransformed equation as follows:

Where W is body weight (g), L is total length (cm), a is the intercept and b is the slope of this linear equation (Froese, 2006). For ease of calculation and estimation of growth parameters and mortality of the I. filigera population, the length frequency data were grouped month wise in 3 (Three) cm class interval. Two years data were pooled into one year and data analysis were based on the Electronic Length Frequency Analysis (ELEFAN I and II) computer program that was incorporated in the FAO-ICLARM stock assessment tools (FiSAT; Gayalino et al., 1994).

The growth equation conventionally used in fisheries science, the von Bertalanffy growth equation whereas with the notation of Beverton and Holt (1956) this equation is expressed as:

Where, Lt is the length at age t, L∞ is asymptotic length, k is the growth coefficient and t0 is the theoretical age of fish at 0 (zero) length.

The growth performance index (Ǿ) for I. filigera population was calculated based on the equation given by Pauly and Munro (1984), is as follows:

Where, L∞ is the asymptotic length expressed in cm, T is the mean annual habitat temperature expressed in 0 °C, which is taken 280 °C. Annual fishing mortality was estimated by subtracting of M from Z. Estimation of exploitation rate E was calculated by the Gulland’s (1971) equation of 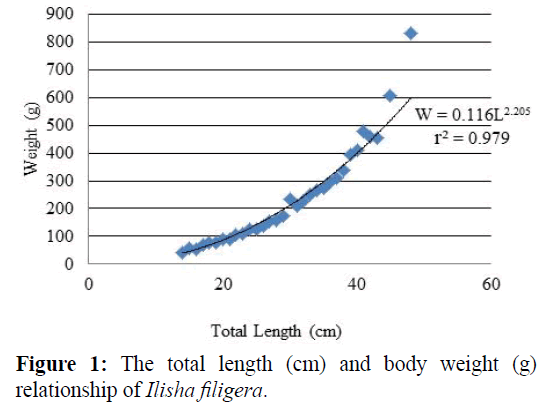 In the present study, total mortality rate Z (2.53 year-1) was obtained through length converted catch curve using FiSAT II program, whereas the natural mortality M was estimated 1.49 year-1. Among the available studies on mortality of I. filigera the highest natural mortality M (1.63 year-1) was estimated by Ashraful (1998) and highest total mortality Z (3.37 year-1) was reported by Mustafa (1999). Only the estimation of the exploitation rate E (0.58) by Mustafa (1999) indicating the over-exploitation condition of the I. filigera stock of the Bay of Bengal, but all other estimation of E of the same stock is not at over-exploitation condition (Table 1).

This is the newest study on the growth parameters, estimation of mortality rates and establishment of length-weight relationship of I. filigera about 15 years later from last study. This study revealed that, said population is not under proper harvesting schedule form its habitat, because the exploitation level is below the optimum fishing pressure. So, this information will ultimately help to assess the stock of I. filigera for sustainable management of this species in southeast coast of the Bay of Bengal of Bangladesh. Moreover, the intense study is needed to assess, monitor and sustainable management of this commercially important fish stock of the Bay of Bengal coast.