Adenoid hypertrophy, a common disorder in pediatric population can present as a variety of symptoms including snoring, nasal obstruction and hyponasal speech to obstructive sleep apnea (OSA), chronic rhinosinusitis and recurrent otitis media. Here we present a four years old boy presenting with periodic hematemesis for several months and the complaint of persistent presence of blood in saliva for whom complete GI evaluation revealed no obvious source. After otolaryngology consultation, detailed history and nasopharyngoscopy revealed hypertrophied adenoids as the source of bleeding. Surgical adenoidectomy was curative after 9 months follow up. This paper presented our experience in the management of an adenoid hypertrophy case presenting with oropharyngeal bleeding due to a mass-like lesion that is, to our knowledge, the first case of this issue.

The adenoid or pharyngeal tonsils form the central part of the ring of lymphoid tissue surrounding the oropharyngeal isthmus. Adenoids are fully developed during the seventh month of gestation, and continue to grow until the fifth year of life, often causing some airway obstruction. Thereafter, the adenoid gradually atrophies, the nasopharynx grows, and the airway improves [1]. Adenoid hypertrophy, a common disorder in pediatric population can present as a variety of symptoms including snoring, nasal obstruction and hyponasal speech to obstructive sleep apnea (OSA), chronic rhinosinusitis and recurrent otitis media [2,3]. Bleeding and hematemesis are different presentations of adenoid hypertrophy, which can be missed if the physician would not be aware of it. Here we report a case of adenoid hypertrophy presenting with upper gastrointestinal bleeding in a 4-year-old boy. The patient’s parents have consented to the submission of the case report for submission to the journal.

An 18-kilogram 4-years-old boy was referred to Ali Asghar hospital (Tehran, Iran) with the complaint of bleeding from his mouth. He had periodic hematemesis for 8 months and three hospital admissions. Several diagnostic procedures had been performed in search for gastrointestinal bleeding. Gastrointestinal endoscopy showed mild erythema of lower esophagus and erosive lesion was seen in antrum and prepylouric area in the stomach. Duodenum was normal and no obvious source of bleeding was found. Pathological examination revealed mild chronic inflammation, which could not justify the bleeding. There was no finding suggestive of celiac disease. At first examination, there was no source of epistaxia in anterior rhinoscopy, and oral and oropharyngeal examination was also normal. The chest X-ray and all the laboratory findings were normal except for noticeable anemia but the patient still had fresh bleeding from his mouth, which was mixed with his saliva all day long (Table 1).

Table 1: Laboratory findings of the patient.

After about fourteen days of admission and evaluation in a pediatric center, the patient was referred to our ENT clinic for more evaluation. The main complaint was presence of blood in saliva all day long. Detailed history revealed complaint of open mouth breathing and snoring as accompanying symptoms overlooked earlier. Full oral examination revealed no pathology or lesion of gingiva, teeth, tongue, oral mucosa and soft palate. There was no postnasal discharge and epistaxis. Nasal fiberoptic endoscopy showed adenoid hypertrophy with fresh bleeding in posterolateral nasal septum due to a bilateral polypoid mass-like lesion with a dimension of 1 × 1 cm, which was similar to the adenoid tissue and there was seen no sign of inflammation or puss suggesting the adenoiditis. Vocal cords and both main bronchus were normal (Figure 1). The patient went under adenoidectomy and pathology of nasopharyngeal mass was reported to be lymphoid follicular hyperplasia lined by nasopharyngeal epithelium. After surgery, the patient became symptom-free and had no more complaint of bleeding or any other complication during our 9 months follow up. We believe that the normal or mild inflamed adenoid tissue was the source of the bleeding. 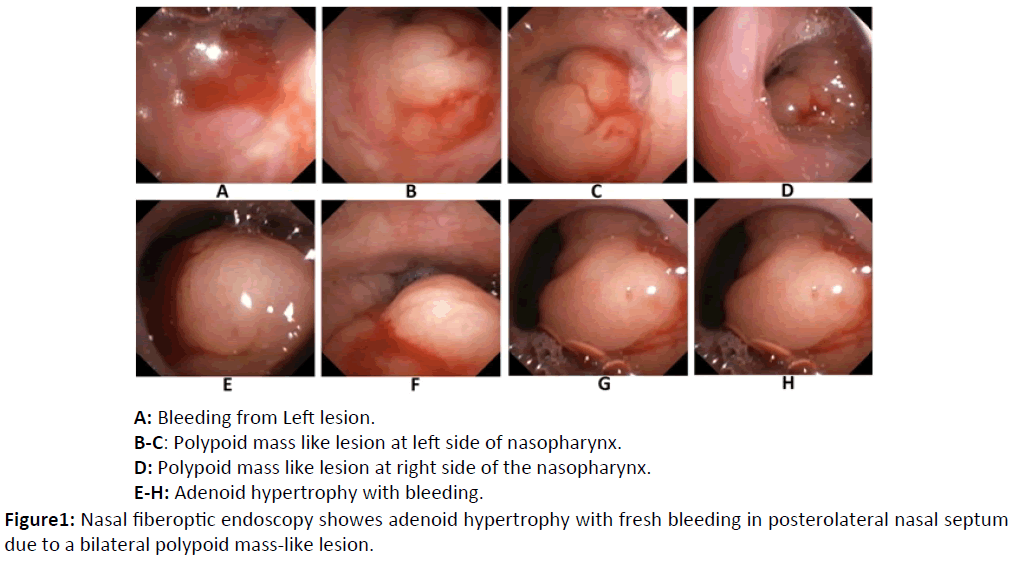 Bleeding from GI tract is never normal and can signify serious disease or a common benign disorder. At any age, swallowed blood may be misinterpreted as gastrointestinal bleeding. Swallowed blood from a nosebleed or intraoral source can be mistaken for GI bleeding [4]. Adenoids are a component of Waldeyer's ring and their basic function is antibody formation. They react later against a great variety of antigens [5]. Adenoid hypertrophy is the most common cause of pediatric upper airway obstruction. Some of serious long-term sequels of adenoid hypertrophy, typically secondary to OSA, include cardiopulmonary complications [3], neurocognitive abnormalities and growth failure [4]. Upper respiratory tract obstruction caused by adenoid hypertrophy may lead to chronic alveolar hypoventilation and pulmonary vasoconstriction [6]. It can also leads to constricted oral breathing and dentofacial growth anomaly defined as "adenoid facies". Some risk factors for severe adenoid hypertrophy include apnea, recurrent respiratory infections and high serum CD163 levels [7].

Although a variety of symptoms and signs have been reported as a result and in accompany with adenoid hypertrophy, there are still rare manifestations, which remains unknown. Spontaneous tonsillar hemorrhage [8] is a defined term in literature which is commonly due to infections, but as we searched the Medline there was no report of spontaneous adenoid hemorrhage. However, the physician should be aware of this presentation of adenoid hypertrophy or adenoiditis, which can be misinterpreted as upper GI bleeding and may impose some invasive diagnostic tests to the patient. As a diagnostic test, nasal endoscopy has a key role in confirming a diagnosis of adenoid hypertrophy or adenoiditis during infancy and early childhood [9].

While the role of enlarged adenoids and tonsils in upper airway obstruction has become wellestablished, adenoidectomy with or without tonsillectomy is one of the most commonly performed surgical procedures in the pediatric population [10]. In our case, adenoidectomy led to successful results and the patient was symptom free over 9 months follow-up.

This paper presented our experience in the management of an adenoid hypertrophy case presenting with oropharyngeal bleeding due to a mass-like lesion that is, to our knowledge, the first case of this issue. This case presentation reveals the importance of a full, detailed medical history and careful examination directed towards nasopharynx in pediatric patients presenting with hemoptysis or hematemesis. Nasal endoscopy has a key role in confirming a diagnosis of adenoid hypertrophy or adenoiditis during infancy and early childhood, the importance of which should not be underestimated.

The authors have no conflict of interest, financial or otherwise with any organization.