Single umblical artery in a neonate: Does it matter?

Single umbilical artery (SUA) is one of the most frequent umbilical malformation. As an Isolated finding SUA does not markedly increase perinatal morbidity and mortality, but when it is associated with other pathologies, leads to higher perinatal loses.

On examination, umbilical cord showed one artery and one vein instead if two arteries and one vein and right hand showed post axial polydactyly. Baby was taking breast feeds well and postnatal period was uneventful. So as the baby had single umbilical artery and polydactyly, we evaluated and did an ultrasound Abdomen which showed bilateral hydroureteronephrosis (Figure 2) and echocardiography done revealed 5 mm ostium secundum ASD, 2 tiny muscular VSD, tiny PDA. Renal function test was within normal limits. Karyotyping was normal. Urologist and cardiologist opinion taken, and Baby is doing well and on regular follow up. 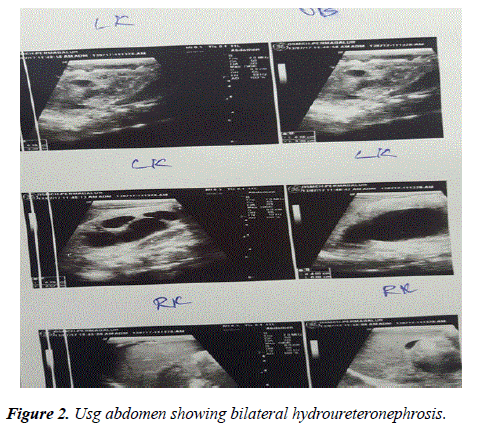 The umbilical cord usually consists two arteries and one vein. Sometimes primary agenesis or Secondary atrophy of one of the arteries occurs resulting in single umbilical artery.

The most common congenital anomalies associated with SUA are renal, then followed by cardiovascular and musculoskeletal as in our case [2]. The aetiopathogenesis of SUA has not been fully explained, however, three possible mechanisms have been suggested in the embryogenesis of SUA. First, mechanism proposed is the primary agenesis of one of the umbilical arteries. Secondly, there may be secondary regression of a preexisting normally formed artery and lastly there may be persistence of the original single allantois artery of the body stalk [3,4].

Regression of a pre-existing normal artery may be due to thrombotic or thrombo-embolic event leading to hemodynamic disturbances in fetal blood flow, ultimately leading to atresias and other associated anomalies [5].