The five drugs viz., GEM, PHE, TRD, IMT, VRP were estimated using a simple, specific, accurate and precise UV–visible spectrophotometric method. These methods involve the addition of a known nexcess of Chloramine-T to the drugs in acid medium followed by estimation of residual Chloramine-T by reacting with a fixed amount of Indigo caramine dye and measuring the absorbance of the dye at 608 nm. The calibration curves obeyed Beer’s law over the concentration range of 3.0,5.5,6.5 μg mL-1 of GEM; 2.5,3.69,5.01 μg mL-1 of PHE ; 2.0,3.5,7.5 μg mL-1 of TRD; 3.0,4.5,7.0 μg mL- 1 of IMT; and 4.2,5.5,7.0 μg mL-1 of VRP were chosen. The methods that are developed were found to be suitable for the estimation of these drugs in bulk and their formulations. Several parameters such as linearity, accuracy, and precision, Limit of detection and Limit of quantification were considered for the analysis of results of the drugs and their corresponding validation were carried out statistically.

GEM is chemically 7-((4Z)-3-(aminomethyl)-4-methoxyiminopyrrolidin- 1-yl]-1- cyclopropyl-6-fluoro-4-oxo-1, 4 dihydro-1, 8- napththyridine-3-carboxylic acid (Figure 1). It has high affinity towards bacterial topoisomerase IV and is a fourthgeneration fluoroquinolone antibacterial agent. Owing to its anti-bacterial activity to both gram-positive and gramnegative, this compound is mainly used for the treatment of acute exacerbations of urinary tract infection, chronic bronchitis and pneumonia. This drug is not official in any pharmacopoeia. Analysis of the literature demonstrated that there are numerous analytical methods for the estimation of GEM is specified. The present work mainly aims to describe a simple and sensitive UV method for estimation of GEM in tablet formulation [1-9]. 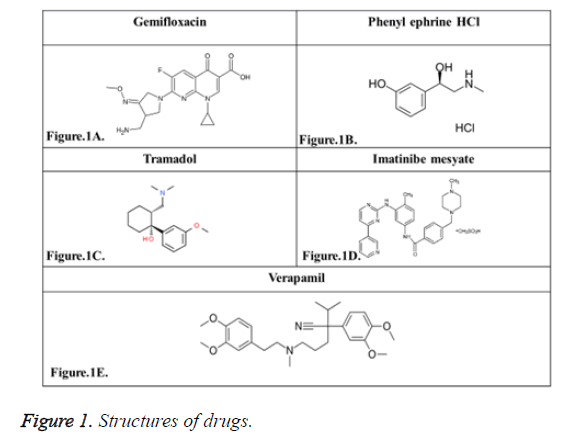 Phenylephrine hydrochloride ((R)-1-(3-hydroxyphenyl) 2- (methylamino) ethanol hydrochloride, C9H13O2N. HCl], (Figure 1) is a white crystalline powder, andbelongs to the group of medicines called sympathomimetics. It acts as a stimulator for alpha receptors in certain areas of the body. It is used locally, as decongestant, for non-specific and allergic conjunctivitis, sinusitis and nasopharyngitis [10-15].

Chemically Tramadol is (2-(dimethylaminomethyl)-1-(3- methoxyphenyl) cyclohexanol) (Figure 1C). It possesses μ- agonist activity. Tramadol hydrochloride is used for treating moderate to severe pain and is centrally acting analgesic and effects reuptake at the noradrenergic and serotonergic systems. Analysis of the literature demonstrates that there are few analytical methods reported for the determination of tramadol [16-23].

The Chemical name of Imatinib Mesylate is 4-4 ((4-methyl-1- piperazinyl) methyl)-N-(4-methyl-3-((4-(3-pyridinyl)-2- pyrimidinyl) amino) phenyl) -benzamide mono methane sulfonate (IMT). It has a molecular formula of C29H31N7O.CH4O3S and a molecular weight of 589.71(Figure 1). Imatinib is used in the treatment of leukemia and gastrointestinal tumors and is a cancer medication. It controls the growth of the cancer cells by inhibiting the proteins involved in cancer cell growth, resulting in reducing the cancer symptoms, prevent the spread of cancer cells, and aids other treatment [24].

Verapamil chemically, (VRP) (RS)2(3,4dimethoxy phenyl)5{(2(3,4 dimethoxyphenyl) ethymethyl)amino}-2-prop- 2-ylpentanenitrile having molecular formula, C27H38N2O4 (Figure 1) belongs to Phenylalkylamine class and acts as a Ltype calcium channel blocker. It is used in the treatment of hypertension, angina pectoris, cardiac arrhythmia, and most recently, cluster headaches. It is highly effective in the prevention of migraine. During cryopreservation of blood vessels, VRP plays the role of a vasodilator. It belongs to class 4 antiarrhythmic and is more effectual in controlling ventricular rate compared with digoxin. British Pharmacopoeia contains the data corresponding to this drug and its formulations. For the assay of Verapamil in bulk and dosage forms, a gas chromatographic method was recommended by United States Pharmacopoeia and a non- aqueous titration method was given by Indian Pharmacopoeia. Several analytical methods for the determination of VRP are reported in the literature [25-34]. To the best of our knowledge, data for the estimation of above drugs using UV-Visible spectrophotometric method was not reported. The aim of the present work is to develop accurate, simple, sensitive, and costeffective method for the analysis of the above drugs.

The drugs of pharmaceutical grade were procured from Arabindo pharmaceuticals and Hetero drugs Pvt. Ltd. Hyderabad. Acidic Chloramine-T using Indigo Caramine dye and HCl were procured from S.D. Fine chem Pvt. Ltd., Mumbai, India. For proper filtration Whatman filter paper number 42 was used. All the chemicals and reagents were used without further purification and are of AR grade and throughout the investigation, double distilled water was used. Tablets were purchased from the local market.

The optical properties of as synthesized drug solutions were characterized by UV – visible spectrophotometer (Thermo Nicolet 100 and Elico 159) in the range of 200–800 nm. For weighing the reagents a high precision Analytical balance was used.

A pure drug solution was prepared and its aliquots were transferred into a series of 10 mL calibrated flasks in the range of (1.0 - 8.0 mL). Further 2 M HCl was added to each flask and followed by addition of 1 Ml oxidising agent which is Chloramine-T. The resultant solution was stirred for 10 minute under infrequent shaking. Finally, to each flask 1 mL of Indigo caramine dye solution was added and the volume was adjusted up to the mark with double distilled water and stirred well. The absorbance of as prepared samples was measured at 608 nm after 5 minutes. A standard graph was plotted using absorbance versus the concentration of drugs. Finally, the unknown samples concentration was measured from the calibration graph or computed from the regression equation derived using Beer’s law data. Calibration curve for each drug is drawn in Figure 2. The limits of Beer ’ s law, slope, intercept, correlation coefficient, sandell’s sensitivity and regression equation for each drug are tabulated in Tables 1 and 2. 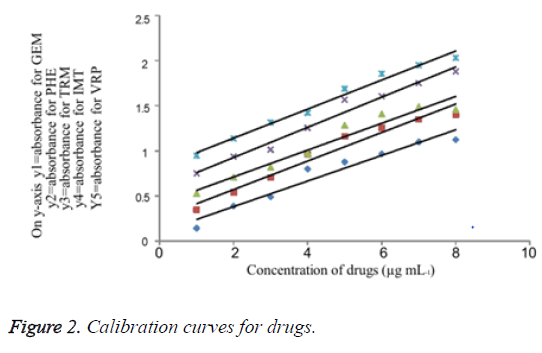 Table 1. The range of concentration of the drugs used for Oxidation with Chloramine-T and Indigo caramine.

Table 2. Analytical parameters for the oxidation of the drugs used for Oxidation with Chloramine-T and Indigo caramine.

The following drugs such as GEM, PHE, TRD, IMT, VRP of 10 mg each were finely ground in to powdered form from tablet form and weighed accurately and dispersed in 70 mL distilled water and then filtered through Whatman Number 42 filter paper. From the resultant filtrate, 10 mL was discarded and a suitable aliquot of filtrate was further diluted for the analysis within the limits of Beer’s law.

Validation is a process of establishing documented evidence, which provides a high degree of assurance that a specific activity will consistently produce a desired result or product meeting its predetermined specifications and quality characteristics. Several parameters such as Linearity, Accuracy and Precision were validated for this method.

The linearity of an analytical method is its ability to elicit test results that are directly or by a well-defined mathematical transformation proportional to the concentration of analyte in samples within a given range. Results should be expressed in terms of correlation co-efficient. From the data corresponding to the linearity, precision and accuracy, the range of analytical method can be obtained.

Accuracy of an analysis is determined by systemic error involved. It is defined as closeness of agreement between the actual (true) value and analytical value and obtained by applying test method for a number of times. Accuracy may often be expressed as Recovery by the assay of added amount of analyte. It determines the correctness of the analytical method.

Table 3. Application of proposed method for the estimation of accuracy and precision by oxidation using Chloramine-T and Indigo caramine.

A series of drug solution i.e. 1 to 7 mL of the drug solution was transferred in to separate 10 mL volumetric flasks. To these series of flasks add 2 M acid solution followed by 1 mL of oxidising agent which is Chloramine-T. After 10 minute with occasional shaking, add 1 mL of Indigo caramine dye. Later the flasks were filled with double distilled water till the mark and shake well. Allow the flasks to measure at 608 nm. For every individual drug a standard graph was prepared by plotting the absorbance versus the concentration of drugs and computation was carried out using regression equation derived using Beer's law. The concentration of a substance in an unknown sample is usually determined in analytical chemistry by plotting a calibration curve using a set of standard samples of known concentration and comparing with unknown concentration. The relative response of the drug is being calculated from the absorbance to concentration of the drug. The concentration of each drug was determined from a calibration graph constructed as shown in (Figure 2). Table 2 shows the limits of Beer's law, slope, intercept, correlation coefficient, sandell's sensitivity and regression equation for each drug.

Procedure for assay of pure drugs

Pure drug sample solutions containing drug in the Beer's law limit were chosen, in order to test the accuracy and precision of the methods developed.

The following factors such as accuracy, limit of detection, limit of quantification, linearity, selectivity and ruggedness were considered for quantification of drugs using each method. All analyses were carried out in triplicate for analyzing the precision and percent recovery and percent RSD were considered for accuracy. The values for each drug are less than 2, which confirm that the methods developed are of high accuracy and precision. The values of F-test and t-test were further calculated using a standard reference method. From the Table 3 It is clear that the values of t-test and F-test are below the allowable range. This confirms the the exceptional applicability of the methods for pharmaceutical analysis.

To every pure drug sample, a known excipient of each drug is added and recovery experiments were performed, to test the selectivity of the drug. The methods have been tested for their ruggedness by two analysts using two different spectrophotometers.

A series of drug samples of 1 mL to 7 mL were taken in 10 mL volumetric flasks to carry out the reaction. To this series add 1 mL of HCl followed by 1 mL of Chloramine-T solution. These flasks were set aside for 10 minute with occasional shaking; later 1 mL of Indigo caramine dye was added, then completed to 10 mL total volume with water. Analysis of the data indicates that for 1.0 mL of HCl, the maximum absorbance was noticed. In addition, with increase in the volume, decrease in the absorbance was noticed. Consequently, a volume of 1.0 mL of HCl was finalised for all measurements.

The following drug solutions were chosen in Beer's Law limit in order to test the applicability of the method developed. For this study 3.0,5.5,6.5 μg mL-1 of GEM; 2.5,3.69,5.01 μg mL-1 of PHE ; 2.0,3.5,7.5 μg mL-1 of TRD; 3.0,4.5,7.0 μg mL-1 of IMT; and 4.2,5.5,7.0 μg mL-1 of VRP were selected. Table 1 shows the regression characteristics of the drugs. The analysis of each tablet is carried out thrice in order to calculate the precision and accuracy is estimated in terms of percent recovery and percent RSD. Table 4 shows the percent recovery from commercial formulation. The applicability of the developed method for the pharmaceutical analysis was confirmed from the obtained results such as excellent percent recovery and RSD being less than 2 for each drug. Further calculations of t-test and F-test values were carried out.

From the Table 5 It is clear that the values of t-test and F-test are below the allowable range. This confirms the exceptional applicability of the methods for pharmaceutical analysis. The developed methods can be applied without interference to pharmaceutical analysis, which is indicated from the excellent recovery studies.

A novel, simple, accurate and precise method, which is applicable in ordinary laboratories was developed for the determination of GEM, PHE, TRD, IMT, VRP. Using this method, the drugs could be determined from frequently used excipients without intrusion, in tablet formulation. In this method, inexpensive and simple to prepare solvents were used. They could be used for routine drug analysis in a quality control laboratory.

We are grateful to Head, Department of Chemistry, Osmania University for providing facilities.