Background: Laryngeal metastases are rare and uncommon. Secondary involvement of the larynx with nearby tumors is often, but involvement with distant metastases is very rare. Renal cell carcinoma (RCC) has a very high metastatic potential, however, larynx is rarely involved. Case report: In this text a case of a 63-year-old is described who had laryngeal growth several years after nephrectomy due to renal carcinoma. The laryngeal biopsy was done several times until the final diagnosis was made, thanks to immunohistochemistry. Conclusion: Renal cell carcinoma can cause metastases which may occur years after the primary disease. Metastases to larynx are very rare, however they can appear, therefore they have to be included in our differential diagnosis of laryngeal, and especially secondary laryngeal cancer.

Laryngeal metastases are rare and uncommon, and they can represent a challenge during the diagnostic process. They can be the first and sometimes the only presentation of primary disease. Secondary involvement of the larynx with nearby tumors is often, but involvement with distant metastases is rare and not considered sufficiently. Namely, distant metastases represent only 1 % of all laryngeal tumors [1].

Nose, tongue, thyroid gland and parotid glands are included in the reported cases [4]. Renal metastases to the larynx are very rare and described in a very few cases [5,6].

The 63-year-old male patient was referred to our Department in order to obtain the second opinion.

He was complaining of hoarseness for the last three years and denied any other symptoms.

A laryngomicroscopy and biopsy of suspicious lesion on the left ventricular fold were performed at the other Department. Pathohistological diagnosis referred to polyp. Multi-slice computerized tomography (MSCT) imaging of the neck was also performed, which showed calcified lesion of the left and front half of the right lamina of the thyroid cartilage in size of 42 × 19 × 42 mm which was imbued with punctiform calcified parts. A radiological diagnosis referred to chondrosarcoma. Due to this result another biopsy was done through the neck two weeks later. Pathohistological diagnosis showed a carcinoma of myoepithelial differentiation, clear cell variant. Due to these differences in PH diagnosis, the patient was referred to our Department.

From history: due to renal cancer the patient had his left kidney operated before seven years, clear cell variant, pT1b. Moreover, he had his appendix and hydrocele operated, and he had a septoplasty. During the examination the left ventricular fold and left piriform sinus were found protruding. During the examination of neck, there were no enlarged lymph nodes.

In radiological features, neck ultrasound revealed a mass on the left laryngeal side, size 3.9 × 2.5 × 3.6 cm with a good internal vascularisation. There were a few small reactive lymph nodes, one without hilum on the right, lower third of the neck in a size of 1.5 × 0.6 × 0.5 cm. 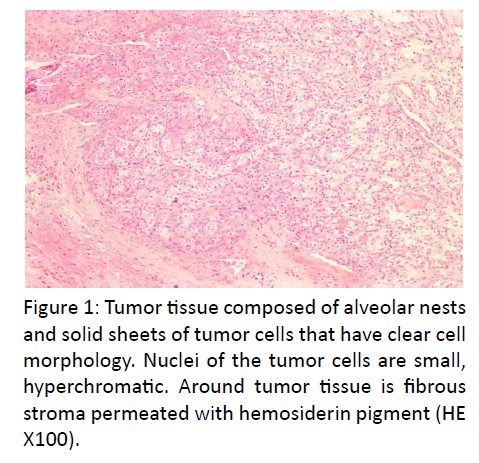 Figure 1: Tumor tissue composed of alveolar nests and solid sheets of tumor cells that have clear cell morphology. Nuclei of the tumor cells are small, hyperchromatic. Around tumor tissue is fibrous stroma permeated with hemosiderin pigment (HE X100). 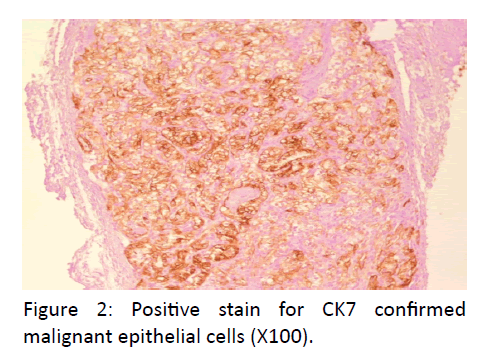 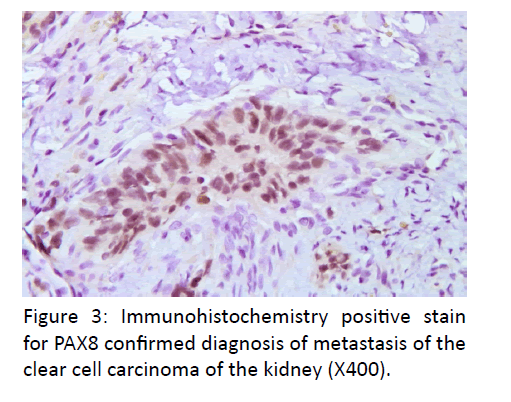 Figure 3: Immunohistochemistry positive stain for PAX8 confirmed diagnosis of metastasis of the clear cell carcinoma of the kidney (X400).

Tissue was negative on parathormon, PSA, synaptophysin and CK5/6. The tumor also infiltrated the cartilage. It can be concluded that the metastasis of clear cell renal cell carcinoma is present.

The renal cell carcinoma comprises 85% of all renal tumors. Among histological types of renal carcinoma such as chromophilic, chromophobe, oncocytic and collecting duct carcinoma, the most frequent is clear cell cancer with prevalence of 80% of all renal patients (6).

It is not easy to diagnose the renal cell carcinoma and it requires very good immunohistochemical techniques.

The renal cell carcinoma has a high potential to metastasize to lungs, bones, liver, lymph nodes, pancreas, adrenal glands, pleura, brain and skin [7]. Metastases to head and neck are very rare; however the most frequent site is the thyroid gland [8].

Laryngeal sites are also very rare; a few cases have been reported. Ferlito et al., reported only seven cases of secondary laryngeal cancers at the Department of Otolaryngology of Padua (Italy) University during 21 years, i.e. from 1966 to 1986. A review of the world literature showed only 113 previously reported cases. The most common metastases resulted from cutaneous melanoma, followed by adenocarcinoma [1].

According to Nicolais et al., only 143 cases of secondary laryngeal tumors were reported in literature at that time. The most common were metastases from cutaneous melanoma and renal cancer, whereas only sporadic cases stemming from lung and colon adenocarcinoma were documented. The authors reported one case of lung carcinoma metastasizing to larynx and two cases of adenocarcinoma metastasizing to larynx [9].

Dee et al., reported a case which represented the only case ever described in literature at that time., They presented isolated supraglottic laryngeal renal cell carcinoma metastases which occurred 7 years after radical nephrectomy had been done [5].

Signs and symptoms of laryngeal involvement are as usual as with the primary disease. They depend on site and size of the lesion. Our patient had a very clear laryngeal symptom: hoarseness.

Our patient had an invasion of contralateral suprarenal gland and two suspicious lymph nodes, one on the aortal bifurcation and another one on the lower third of the neck.

Although at the moment of getting diagnose metastases were not confirmed they probably represent metastatic disease.