Saphenous neuralgia of the knee.

The saphenous is the longest branch of the femoral and is a purely sensory . It arises from the 3rd and 4th lumbar roots. As mentioned it is an exclusively sensory. It supplies the medial articulation of the knee and cutaneous sensation of the medial aspect of the knee, leg and ankle. The travels in close proximity to the femoral vessels subsartorial. This hunter canal is formed by a fibrous band spanning between the vastus medialis and the adductor magnus. At this point the is most susceptible to entrapment. The enters the adductor canal and then cross the adductor muscle. The adductor canal or hunter´s canal is a muscular tunnel in the thigh. It is boundered by the sartorius muscle anteriorly; the vastus medialis muscle laterally as well as the adductor longus and adductor magnus muscles postero-medially and contains the femoral artery, vein and the saphenous . The roof of the hunter´s canal is a fibrous band bridging the vastus medialis and adductor magnus (Figure 1) [18]. Within the canal the is vulnerable to entrapment. It descends along the medial side of the knee and exits the adductor canal. Medial of the knee the infrapatellar branch divides from the . 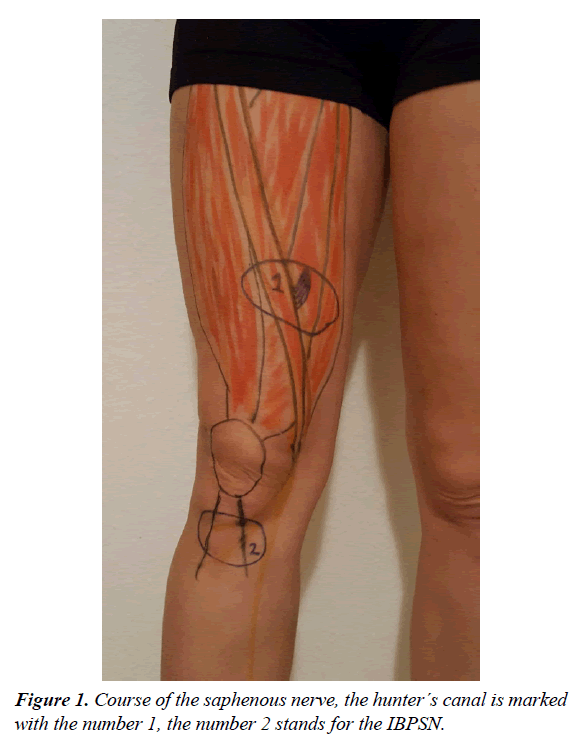 Figure 1: Course of the saphenous , the hunter´s canal is marked with the number 1, the number 2 stands for the IBPSN.

The incidence of IBPSN is depending on the type of knee surgery performed. In general medial and horizontal incisions have an increased risk to injure the IPBSN. Mochizuki as well as Mistry reported that in all cases after total knee arthroplasty that patients complaint of some sensory deficit [1,2]. In a study by Ganzone et al. 53% showed a partial or complete sensory loss after medial arthrotomy but all patients suffered from some disturbances especially with kneeling [3,4]. Hunter et al. had quite similar results with an overall incidence of 89% [5-15]. IPBNS injury after ACL reconstruction is well known and ranges depending on the surgical technique used up to 50% with the Bone Tendon bone autograft technique and 30% to 59% with the hamstring harvesting technique. [7,9,16,17,21] The incidence of iatrogenic injury to IPBSN after knee arthroscopy has been reported 12% to 84% [9,17]. Even tibia nailing is case of lower leg fracture with a vertical incision as entry point leads in 60% to sensory deficit an can be the reason for chronic anterior knee pain [16]. In principle, exogenous can be distinguished from endogenous (iatrogenic) lesions. Iatrogenic injuries are the common cause. Particularly after orthopedic surgery of the knee such as hamstring tendons harvest for ACL reconstruction, total knee arthroplasty as well as arthroscopy of the knee, damage to the saphenous or the IBPSN can occur. [4,17]. Also to be mentioned are injuries of the while removing the saphenous vein for the operative treatment of coronary heart disease. Exogenous factors are less frequent. Triggers can be uncomplicated falls. In the course of days, weeks or months, swelling, hematomas or scar formation occur leading to entrapment of the . In particular, it may be difficult to establish the direct link between the simple fall and the complaints occurring only after months. Rarities are infectious causes such as herpes simplex or mononeuropathy in herpes zoster, as well as tumors such as schwannoma or neurofibromas that develop in the course of the . Spontaneous (non-traumatic) saphenous neuralgia has been reported in literature [6]. In elderly patients, an ischemic cause is always to be considered. In case of intoxication, the concomitant rhabdomyolysis can lead to a volume increase of the damaged muscle and thus also exert pressure on the .

Affected patients complain of neuropathic (burning or electrifying) pain in the area of the saphenous which is the medial aspect of the thigh. In case of dissection of the IBPSN there is a local loss of sensation of the anteromedial part of the knee up to the medial lower leg. Enhancement of the pain can be triggered by activities such as kneeling; stair climbing or even normal gait since those activities additionally compresses the . Sometimes patients develop a reflex sympathetic dystrophy [13]. There are no motoric disturbances.

Diagnostics is performed primarily by anamnesis survey and clinical examination. In the case of the entrapment there is a sharp pain at the level of the Hunter canal which can be provoked by pressure (Hofmann Tinel sign) (Figure 2) Electrophysiological examinations serve primarily to exclude other causes of pain, since the amplitudes are small and often not reproducible [22-24]. In the region of the positive Tinel sign, a local anesthesia with 1% lidocaine can be performed. A 50% pain reduction confirms the diagnosis [20]. A pain provocation test can be used to determine the presence of a neuropathy of the saphenous . The patient is on the side, the hip is extended and abducted and the knee flexed (Figures 3-6) Imaging of the saphenous in MRI is often difficult, since the has a flat morphology. But indirect signs of compression such as scarring, hematoma or swelling of the surrounding tissue can be found. The infrapatellar branch is too small for direct imaging. 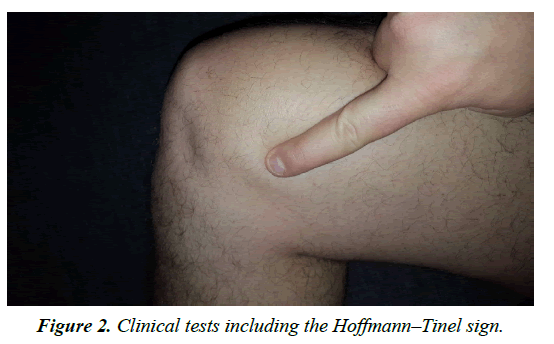 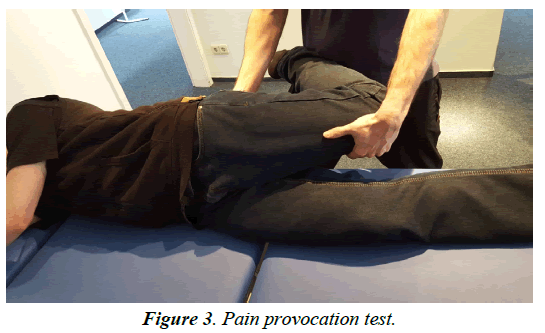 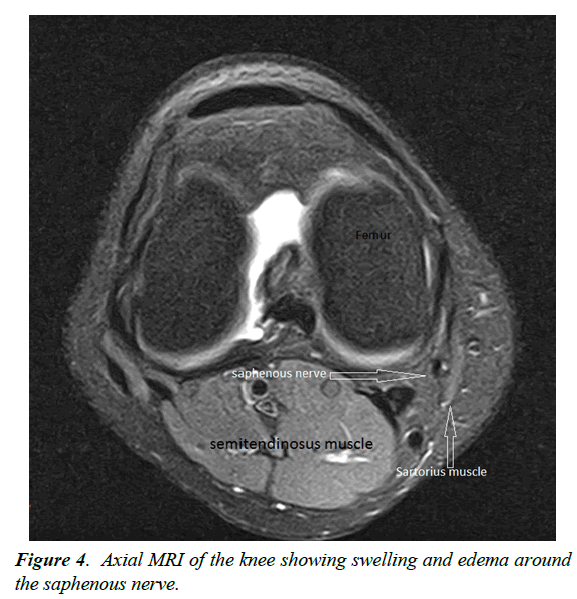 Figure 4: Axial MRI of the knee showing swelling and edema around the saphenous . 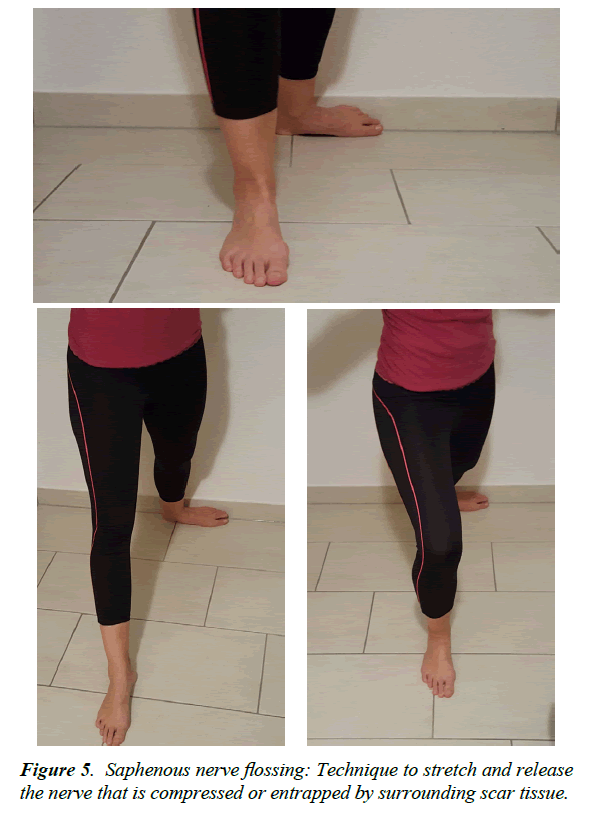 Figure 5: Saphenous flossing: Technique to stretch and release the that is compressed or entrapped by surrounding scar tissue. 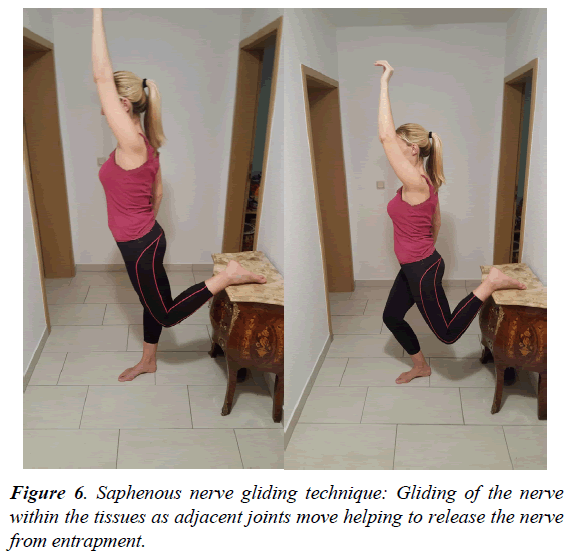 Figure 6: Saphenous gliding technique: Gliding of the within the tissues as adjacent joints move helping to release the from entrapment.

Treatment options include physical therapy, myofascial release, vibration therapy, acupuncture gliding technique, flossing. Flossing and gliding techniques refers to exercises that help to restore motion between a and its surrounding soft-tissues and can help to resolve even chronic lower leg pain that has not responded to conventional therapy [23,25]. The affected can be blocked by infiltration with a local anesthetic. Thus, the success of the procedure can already be tested in advance and the diagnosis can be confirmed [18]. A drug therapy with NSAIDs or neuropathically effective drugs such as Amitriptyllin, Gabapentin or Pregabalin is also useful [9]. Neurolysis and decompression of the is indicated in a treatment-resistant compression syndrome of the saphenous in the Hunter's canal. The indication for neurolysis also applies to scarring-induced narrowing [3]. Pre-operatively, the pain point is marked with a pen so as to mark the later incision. After skin Incision dissection through the superficial fascia is done followed by exposure of the sartorius muscle. The posterior margin of the muscle is freed, and is held aside with a retractor. This provides a clear view of the hunter canal. After cutting the roof the femoral vessels as well as the saphenous can be seen. The s can proximally and distally be freed. In the case of the infrapatellar branch, selective denervation is recommended. The is examined, dissected, and the proximal stump is sunk in a muscle to prevent a new growth of a neuroma [9].

Entrapment of the saphenous and its infrapatellar branch is a frequently overlooked cause of persistent knee pain. Primary entrapment of the saphenous is very uncommon, most commonly it occurs after trauma or surgeries. Because of its anatomical course through the hunter´s canal even minor trauma can lead to swelling, hematoma and scar entrapment od the saphenous in the hunter canal. Since the causes of the entrapment like swelling or hematoma are in principle self-limited, we always recommend the conservative therapy. In case of chronic pain the operation is indicated. Nevertheless, rare cause of saphenous entrapment like malignancies have been described, so physicians should be aware of rare cause which can be detected by MRI. Surgical dissection of the IPBSN is a well-known complication after knee surgeries. Pekala et al. postulated that every surgical intervention performed on the anteromedial aspect of the knee is associated with a risk of iatrogenic injury of the . This can lead to local loss of sensation to the lower leg, neuropathic pain or the formation of a painful neurinoma and reflex sympathetic dystrophy [20,22]. Injury of the IBPSN is an important cause for anterior knee pain and kneeling pain and must always be considered after any surgical intervention [17]. According to Haviv et al. IPBNS injury after ACL reconstruction is well known and ranges depending on the surgical technique used up to 50% with the Bone Tendon bone autograft technique and 30–59% with the hamstring harvesting technique. [7,8]. The incidence of iatrogenic injury to IPBSN after knee arthroscopy has been reported 12% to 84% [8]. The IBPSN extend horizontally, so horizontal skin incisions are recommended in order not to injure the [4]. In the differential diagnosis of anterior knee pain which is commonly seen after total knee arthroplasty neuropathic pain must be considered as a result of a lesion of the saphenous or the IPBSN [13,14]. Once a clinical diagnosis of saphenous entrapment has been made, further diagnostic testing is mandatory. Saphenous entrapment may coexist with other pathology so that the complaints can easily be confused with arthrosis. Local injection may aid in confirming the diagnosis or even in providing prolonged symptomatic relief. Direct imagining of the by MRI is mostly not possible. Taking history and physical examination usually should rise the suspicion for entrapment of the infrapatellar branch of the saphenous when evaluating patients with pain on the medial aspect of the knee. Surgeons should be aware that severe symptoms can arise even weeks or month after surgeries or even minor trauma leading to compression of the saphenous . The IPBNS is highly variable and no safe zone could be identified. To minimize the risk of IPBSN damage the surgeon should use of the shortest possible oblique incision during hamstring tendon harvesting [11,19]. Despite of the surgical outcome iatrogenic injury to the IPBSN impact quality of life and may lead to unsatisfaction [2].