Rhinolith: A Forgotten Identity-Series of 18 Cases with Review of Literature

Introduction: Rhinolith or nasal stone is formed by mineralization within nasal cavity. Though stones are infrequently seen in nasal cavity, our experience of frequent encounter with this clinical entity prompted us to write up on this rather forgotten entity and its clinical concern. The salient features of these Rhinoliths and their relevance to clinical practice are discussed and a series of cases with their way of presentation, different varieties and diagnostic dilemmas are discussed in this article so as to unable the attending clinician to be aware of this still prevailing condition and to promote to have a high index of suspicion.

Materials and methods: In this article, we present eighteen cases of rhinoliths who were admitted between January 2001 and December 2015 with unilateral malodorous foetid nasal discharge, nasal obstruction, epistaxis and cacosmia.

Results: Females were more frequently affected than Males in our study 55% of females and 44.4% were males. 14 patients (78%) had rhinoliths lodged in the posterior part of nasal cavity while only 4 (22%) patients had rhinoliths in the anterior part of nasal cavity. Majority of the rhinoliths were located in the left side (N=12, 67%) and remaining were situated in the right nasal cavity. Most of the patients presented with Malodorous foetid rhinorrhea (n=14) and headache or facial pressure symptoms or pain (n=13), around 10 patients had a history of epistaxis or blood stained nasal discharge.

Rhinoliths are calcareous concretions that are formed by the deposition of salts on an intranasal foreign body. The foreign body, which acts as the nucleus for encrustation, can be either endogenous or exogenous. Desiccated blood clots, epithelial debris, ectopic teeth, and bone fragments are examples of endogenous matter. Exogenous materials include forgotten piece of stone, fruit seeds, plant material, beads, cotton wool, and dental impression material. Rhinoliths can have various clinical presentations like unilateral nasal obstruction, rhinorrhea (usually malodorous foetid and purulent), cacosmia and epistaxis or postnasal bleeding. Other less common symptoms are headache, facial pain and epiphora. The treatment of choice is surgical removal. A high index of suspicion is required for the diagnosis of such a forgotten entity. Polson reports that as early as 1502 Mathias di Gardi mentions that a colleague had seen a rhinolith as big as a pinecone expelled by a patient. The first well documented case of rhinolithiasis was reported by Bartholin in 1654. Foreign bodies normally access the site anteriorly, but they may occasionally reach into the nasal cavity through the choana owing to cough or vomiting. Foreign bodies are normally introduced during childhood, occupying the nasal floor in most situations. Its Presence causes local inflammatory reaction, leading to deposits of carbonate and calcium phosphate, magnesium, iron and aluminum, in addition to organic substances such as glutamic acid and glycin, leading to slow and progressive increase in size. The treatment is removal. If it is large, it should be crushed and the fragments removed.

The study was conducted at Ministry of Health, Sur Hospital between January 2001 and December 2015 by retrospectively collecting datas from the computerized hospital information system. Evaluation of cases were based on demographic profile of the patients like age, sex and side of location of the rhinolith, history of foreign body, coexisting nasal symptoms and illness and previous treatments. The presenting symptom of the patient like nasal block, purulent, malodorous or foetid nasal discharge, nasal or postnasal bleeding and headache were recorded. Rigid diagnostic nasal endoscopy was done for all the patients as a diagnostic tool (Figure 1) computerized axial tomography scan (Figure 2) was done for all the cases to assess the size, site and shape of the rhinoliths. The rhinoliths were removed under general anesthesia in our operating room (Figures 3 and 4). After the surgery patients were advised to perform nasal douching with normal saline. Oral antibiotic therapy, antibiotic nasal ointment (Naseptin) and nasal decongestants were prescribed to all patients. Patients were followed up 3 weeks postoperatively for repeat nasal endoscopy and nasal douching. 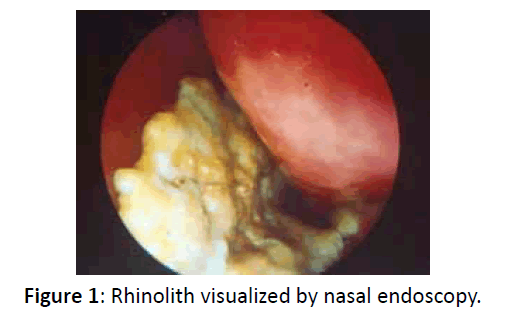 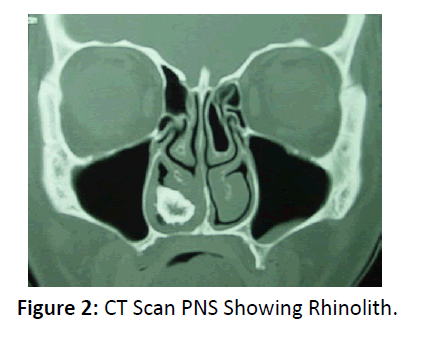 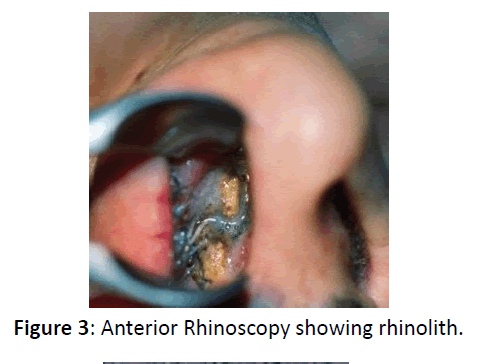 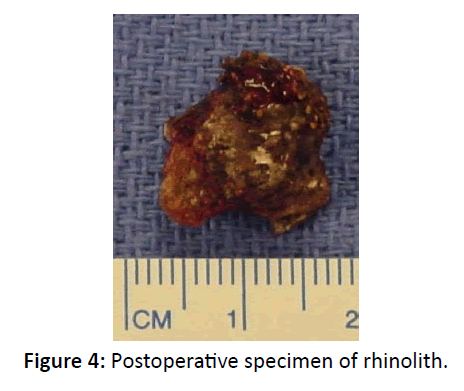 The above table (Table 1) shows that Females were more frequently affected than Males in our study (Female: Male: 10:8)-55% of females and 44.4% were males. 14 patients (78%) had rhinoliths lodged in the posterior part of nasal cavity while only 4 (22%) patients had rhinoliths in the anterior part of nasal cavity. The major reason that could be attributed could be due to presence of Septal deviation and spur on the side of the rhinolith which could have been the main cause for persistent lodgment of the foreign material within the nasal cavity. In our study, majority of the rhinoliths were located in the left side (N=12, 67%) and remaining were situated in the right nasal cavity. There was no history of insertion of foreign body in majority of the case except one patient aged 14 years who had history of stone within the right nasal cavity. Timing of the rhinoliths was also studied with major number of patients (N=17) had prolonged duration of the symptoms ranging between few months to years (some patient had been complaining that their symptoms were present on and off during childhood). Most of the patients presented with Malodorous foetid rhinorrhea (n=14) and headache or facial pressure symptoms or pain (n=13), around 10 patients had a history of epistaxis or blood stained nasal discharge. Unilateral nasal obstruction was prominent on the side patients had deviated nasal septum or spur on the side where rhinoliths were lodged (n=7). Oral malodour was present in only 4 cases and in one female patient aged 10 years there were no symptoms and it was an incidental finding during routine ENT examination. Another female patient aged 45 years also did not feel any symptom by herself and it was frequently complained by the husband as she had oral malodour. Deviated nasal septum was a major coexisting nasal finding in about 13 patients (72%). Sinusitis (n=6) and allergic rhinitis were coexisting in patients with rhinolith. One patient had no accompanying nasal sign.

Table 1: Clinical epidemiology, analysis and characteristics of patients with rhinolith.

Rhinoliths are calcareous concretions that are formed by the deposition of salts on an intranasal foreign body [1]. In general, women are more affected than men. Rhinoliths have been found in patients since three to the age of 76 years. The highest incidence is between the 4th and 5th decades of life [2]. Although the pathogenesis of rhinolith remains unclear; a number of factors are thought to be involved in the formation of rhinoliths. These include entry and impaction of a foreign body in the nasal cavity, acute and chronic inflammation, obstruction and stagnation of nasal secretions, and precipitation of mineral salts [3] Development and progression are believed to take a number of years. Most patients complain of purulent rhinorrhea and/ or ipsilateral nasal obstruction. Other symptoms include fetor, epistaxis, sinusitis, headache and, in rare cases, epiphora. In some patients, rhinoliths are discovered incidentally. Examination should include anterior rhinoscopy and rigid endoscopy. Computed tomography of the paranasal sinuses can accurately determine the site and size of the rhinolith and identify any coexisting sinus disease that might also require treatment [4]. Diagnosis is normally based on symptomatology, history of foreign body introduction into the nose, physical examination and complementary tests. Simple X-ray and paranasal sinuses CT scan support the diagnosis through the presence of calcified concretions in the nasal fossa, in addition to supporting the planning of surgical approach. Diagnosis may be made through routine examination or revealed by imaging exam conducted by other reasons, such as for example a dental treatment. Calcified incrustations in the nasal cavity were subjected to a chemical analysis, first by Axmann [5], and thereafter by various other authors [6]. In general they comprise 90% inorganic material, with the remaining 10% being made up of organic substances incorporated into the lesion from nasal secretions. Mineralogical investigations employing powder diffractometry unequivocally identified the mineral whitlockite(Ca3 (PO4)2) as representing the main constituent of a rhinolith. In addition, the mineral apatite

(Ca5(OH,F,C I) (PO4)3) and carbonated apatite (dahlite) have also been identified. Sharma [7], described rhinoliths as having the following composition:

Seifert [8] noted the need for an endoscopic examination of the nasal cavities. Treatment consists of removal of rhinolith and the surgical approach chosen depends on location and size of the rhinolith and presence or not of complications, but most of them may be removed endonasally.

A typical history, clinical signs, endoscopy, and radiographs showing a calcified mass point to the presence of a rhinolith. For the Differential diagnosis, all possible lesions capable of blocking the nasal cavity and appearing as a calcifying mass on the X-ray must be

Taken into account, for example, calcifying angiofibroma, chondrosarcoma, chondroma, osteosarcoma, and calcifying polyps although rhinoliths are a rare occurrence, the Otolaryngologist should be aware of their existence despite the fact that it is rarely