This is a case report of a 7 year old male child who presented with an unusual foreign body a glass marble in upper esophagus. The child was a case of global developmental delay, seizure disorder, patent ductus arteriosus, congenital hydrocephalus with VP shunt in situ. The case was a challenging one to the entire team of surgeons, anesthesiologist and pediatricians. Under general anesthesia the foreign body was removed using a foley’s catheter. Spherical foreign bodies like glass marbles are always challenging as the usual instruments cannot grasp such foreign bodies and there is always a chance of pushing the foreign body downwards during the attempt to remove. In this case foley’s catheter was used to retrieve the foreign body which is cheap, easily available and non-traumatic.

Foreign bodies in the esophagus are commonly encountered in routine practice. Its more common in pediatric population. Non spherical objects of less than or equal to size 1.5 inches and spherical objects of size less than or equal to 1.75 inches in diameter are susceptible for impaction in cricopharynx and esophagus [1]. In pediatric age group especially under 3 years of age second molars are not developed and swallowing mechanisms and glottis closure are not mature. Diagnosis of esophageal foreign body is usually made by a positive history of ingestion and plain radiographs. Lateral view is done to determine whether it is in airway or esophagus. Early removal is important so as to avoid mucosal swelling and edema which makes retrieval of foreign body difficult. The possible complications include oesophageal perforation (from foreign body or instrumentation), mediastinitis, retropharyngeal abscess, stenosis of lumen and migration into deeper structures. In 20 % of cases prompt endoscopic or surgical treatment is required [2].

A 7 year old child presented with alleged history of foreign body (marble) ingestion since 1 day and complaints of difficulty in swallowing since 1 day.The child was a known case ofglobal developmental delay, with seizure disorder,also associated congenital hydrocephalus with VP shunt (done 2 years back) in situ andPDA. Unfortunately the child had defaulted on antiepileptic’s from last 6 months and had multiple episodes of seizures since then. The child had seizure episodes even on the day of admission.Pediatriccall for the short and long term management of the above mentioned comorbidities were done. The child was stabilized and an x ray chest AP view was done which showed a radioopaque shadow at DV1 and DV2 as showed in figure 1. The child was taken under GA under due risk due to associated comorbidities. A pediatric cricopharyngoscope was used and the foreign body, marble was visualized just below the upper esophageal sphincter. The foreign body was maneuvered to create a space so as to negotiate a foley’s 8 number catheter beyond the foreign body. Foleys catheter was introduced taking care not to displace the foreign body downwards into lower esophagus. Once the region of bulb of foley’s crossed beyond the foreign body it was inflated with 5 cc air and pulled. Foreign body was removed into as shown in figure 2. Check scopy revealed no bleeding or trauma. The child was extubated immediately following the procedure and post op period was uneventful. Child was discharged on post op day 3.

Though swallowing foreign bodies more commonly occurs between age group of 6 months to 3 years [3], the child that presented to us was a 7 year old, with a global developmental delay. The common foreign bodies in esophagus are coins, pins, toys, nuts, meat bolus, and seeds [4]. They usually present with a positive history of ingestion, dysphagia, odynophagia, and diffuse chest pain or chest pressure. However, in children the history may be vague and initial symptoms poor. Foreign body can lie close to one of the 3 oesophageal anatomical constrictions – cricopharynx, aortic narrowing, oesophageo gastric junction [5]. In our case it was located in the upper esophagus. To confirm the diagnosis radiological assessment is necessary especially to identify the location. In our case we confirmed it with help of chest x-ray AP view. If radiography is negative then endoscopy can be preferred. Use of CT scan is indicated if a foreign body such as a fish bone is suspected or to r/o damage to nearby structures [6]. Treatment of choice for oesophageal foreign bodies depends on the age of the patient, general condition, type, size , shape and total number of foreign bodies [7]. Though endoscopy has been reported to have a success rate of 83% in oesophageal foreign body extraction [7] we used rigid scopy under general anesthesia for our case. Foreign bodies like marble are very tricky to handle due to spherical, nongraspable nature. Here we used a foley’s catheter which is cheap, easily available and non-traumatic to remove the foreign body. This method can be used for most spherical, non-graspable foreign body.

A rare foreign body in upper esophagus of a glass marble in a 7 year old male child with global developmental delay and other multiple comorbidities is reported. Such are the cases of child neglect. The need of active supervision of children while they are playing, eating, interacting with objects which are not appropriate for their age has to be stressed upon. Rigid scopy remains the main stay for management of such cases. The technique varies depending on the type, shape, size, location and number of foreign bodies. 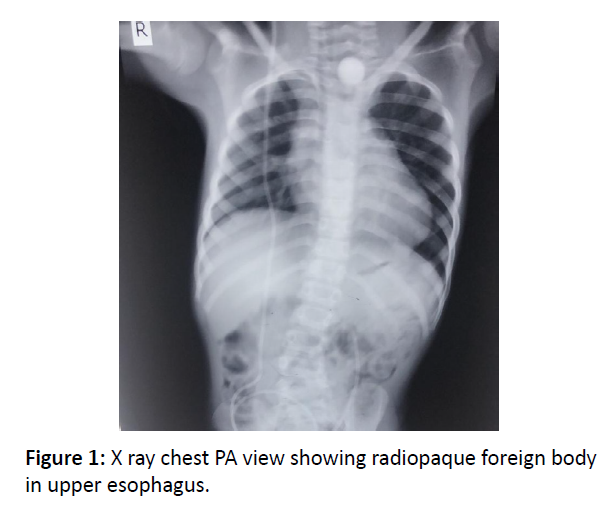 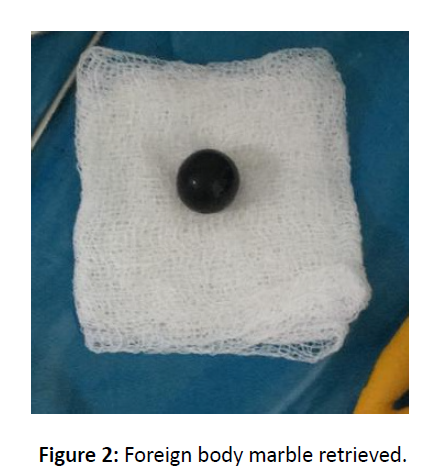