In the planning, design, construction and operational phase of a 99Mo production facility the waste management concept and implementation plays an important role [1]. The strategy for waste management, including the route for the spent targets and long lived fission products has to be described and approved by the responsible authorities. Waste would be generated as solids, liquids, and gases, and would include material in the low, intermediate and highly radioactive categories [2]. Initial treatment of waste streams is usually required at the production site, prior to long term storage. The treatment required is dictated by both the form of the waste and its activity level. This study aims at predicting the amount of liquid waste that will be generated at that facility and performing the calculations of expected dose during liquid waste transportation to the radioactive waste treatment plant, which located outside the 99Mo production plant site, in free incident and accident modes. The radiological risk associated with incident-free transportation conditions would result from the potential exposure of people to external radiation in the vicinity of a shipment. The radiological risk from transportation accidents would come from the direct radiation dose to handlers, crew, and bystanders and would come also from the potential release and dispersal of radioactive material into the environment during an accident and the subsequent exposure of people. INTERTRAN2 code was used in this study to evaluate the radiological risks for both incident free and accident conditions. All radiological impacts were calculated in terms of radiation dose and associated health effects in the exposed populations. The radiation dose calculated was the total effective dose, which is the sum of the effective dose from external radiation exposure and the 50-year committed effective dose from internal radiation exposure.

The 99Mo production facility is located in the vicinity of a multipurpose nuclear reactor (MPR) [3]. MPR is an open pool type reactor, of 22 MW power, used the low enrichment uranium plates (LEU) to produce molybdenum-99 by irradiation to neutron flux of 1.4 × 1014 n/cm2.s for 4 days in the reactor core.

The 99Mo facility is a building incorporating the hot cells for the processing of 99Mo including dissolution, purification, dispensing and packaging. The building has different areas classified in accordance with the radioactivity level handled in them, namely: free, supervised, and controlled. No radioactive material is handled in the free area, which is normally comprises offices, dressing rooms, and common services.

The controlled area is the place where hot cells are located and the facility’s highest activity inventories are handled. This area houses the room and cell ventilation filters, as well as the gaseous, liquid, and solid management areas. Maintenance operations on hot cells are carried out from this area, which also serves for the entry of raw material for the production and exit of the final product. The facility has twelve hot cells with containment box and the cells have viewers and viewing windows, tongs and master-slave manipulators, material entry and exit doors, and maintenance access doors as shown in Figure 1. The 99Mo facility includes waste storage to allow decay but not final waste stream processing. The waste treatment plant is located outside the production plant facility site. 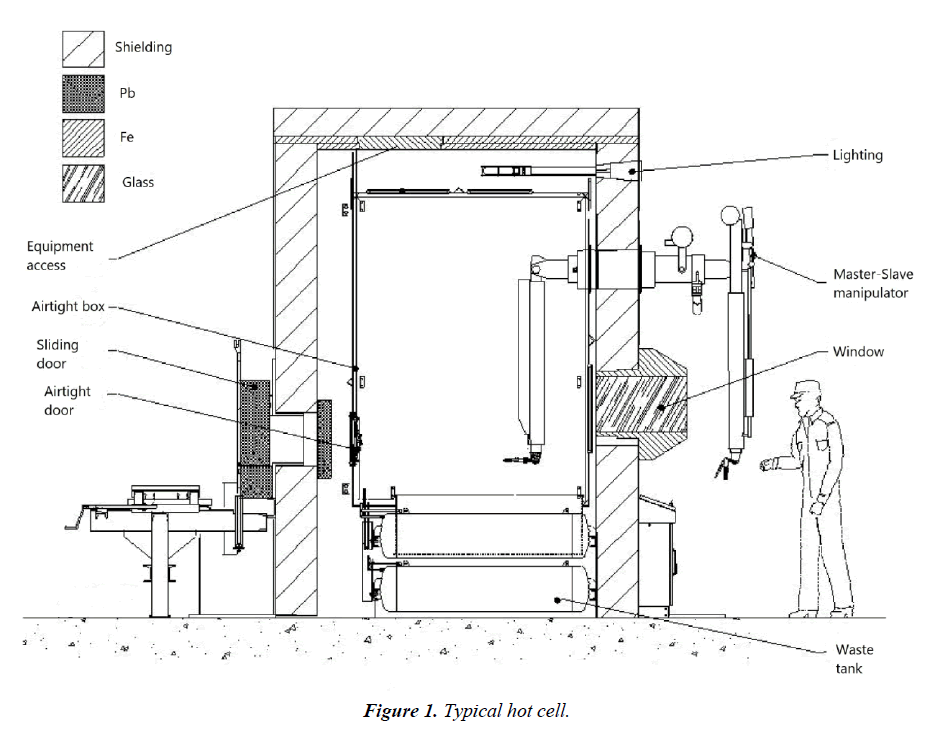 The irradiated target plates would be transferred from the reactor into the cell via a shielded flask and then the target plates would be loaded into the dissolver. The liquid would be filtered and transferred by nitrogen gas displacement through an ion exchange column where the 99Mo and iodine-131 (131I) were retained [4]. The 99Mo product would then be eluted from the column and transferred to the purification hot cell. The column containing the 131I was then sealed and allowed to decay. The separation process [5] lead to two main streams of radioactive liquid waste: one acid stream resulting from the acidification of the process solution with HNO3 for iodine removal and one alkaline stream resulting from the elution of 99Mo from a separation column with NH4OH. Each liquid wastes flow would be collected in separate cylindrical tanks located bellow the production hot cells and would remain there until the later transportation to the treatment unit off-site. The radioactive liquid waste in storage tanks was classified as intermediate level of liquid waste (ILLW) [6]. This study considered that the volume of each storage cylindrical tank was 0.2 m3 with characteristic dimension 0.55 m and properties the same as type-A package [7].

Table 1: Acid waste in a one-batch per week production.

The incident-free dose for persons, along the transport route from the 99Mo production facility to the waste treatment plant, was directly proportional to the external dose rate of the package and inversely proportional to the speed of the truck transporting the material and to the distance between the truck and the receptor. The exposure persons considered in this study were transport personnel, radiation workers for loading of radioactive waste cask, and for members of the public.

Although, the frequency of transport accident in the transport route was low depending on historical accident event data but, the radiological dose associated in accident case must be evaluated. The most severe accident scenario, involved a highspeed impact and burst rupture of the liquid waste cask, was considered in this study. The study has studied the maximum radiological doses associated with accidents involving release of radioactive materials from cask shipped by truck.

The computer code INTERTRAN2 [9] calculates the radiological impact from incident-free transportation and vehicular accidents involving radioactive materials. The code also addresses accidents which may occur during handling operations. The model can be divided into sub models. These sub models are either a part of the computer code or a separate part preparing input data for the INTERTRAN2 code. The transportation model, the material dispensability model and the health effects model are included in the computer code. The standard shipment model, the population distribution model, the accident categorization model and the atmospheric dispersion model are separate from the code. INTERTRAN2 code requires an isotopic description of the material being transported. The user must provide the activity amounts of each isotope present as well as information to distinguish the chemical-physical and dispersion group parameters. INTERTRAN2 code was applied in this study with the following assumptions [10]:

• A uniform isotope distribution throughout the total waste volume.

• No shielding was provided by buildings in urban and suburban areas in the vicinity of transporting truck.

• The liquid waste cask that was shipped to the treatment plant would have a cask dose rate at the regulatory limit of 0.1mSv/h at 1.0meter.

• Fraction of land under cultivation=0.5

• The default rural, suburban, and urban velocities of 80Kph (kilometers per hour), 50 Kph, and 30 Kph for truck travel studied in this paper.

The results of collective doses for the normal transportation of wastes are summarized in Table 2. The exposure groups considered in this study were transport personnel (crew), radiation workers for loading of radioactive waste drums (handlers), and for members of the public including people sharing a transport link with the vehicle (on-link), people beside a transport link that the vehicle traverses (off-link), people in the vicinity of the transporting vehicle while it was stopped (stop), and workers for storage liquid waste. The number of transport personnel for the transportation of wastes was two persons for truck. The number of radiation workers for handling the waste drums was two persons. The number of people at stop is 10 persons and the number of workers at storage was 5 persons. Collective dose of transport workers (crew) was 5.54 E-6 Person-Sv, and the highest collective dose, 4.88 E-4 Person-Sv, is received by group of workers handling the package. Collective dose received by group of workers during storage stage is 1.95E-5 Person-Sv. The permissible dose limit for workers was 20E-3 Sv/year (20 mSv/y) [11]. And so, the dose to a single crew member could therefore far less than the permissible doe limit. Collective doses to individual members of the public (off link, on link) were 3.62E-7 Person-Sv, and 5.67E-9 Person-Sv respectively. The permissible dose limit for public is 1E-3 Sv/ year [11]. And so, the dose to a single public would be less than the permissible doe limit. Therefore, normal transportation of operation wastes by truck would impose negligible radiological impact on transport personnel, radiation workers, and general public.

In addition, INTERTRAN2 was used to evaluate the maximum dose to a population group for a single accident environment. The population was assumed to extend uniformly between 200 and 400 m from the potential accident site with an average shielded population density of 600 adult Persons/km2. The weather was modeled using Pasquill stability categories distributions A,B,C, and F.Stability class F was the dominant for the transport route and presents 41.8% of the distribution. Stability condition classes A, B, and C had the percentage values of 19.82%, 24.99%, and 13.57% respectively [12]. The population individual exposure doses for an impact accident during the transportation of operation wastes were summarized in Table 3 for each route segment. According to the results, the individual exposure doses were negligible compared with the regulatory limit value of 1.E-3 Sv/y (1 mSv/y) [11].

The INTERTRAN2 code was used to estimate the expected radiological consequences and risks resulting from individual shipments of radioactive liquid waste traveling from the radioisotopes production plant to the treatment plant by truck. The liquid waste, containing fission products, was generated from the extraction chemical process of 99Mo in a radioisotopes production plant. Population-averaged dose consequence to persons sharing the transportation route and accident risk estimates over an entire shipment route was calculated for all route segments; rural, subrural, and urban. The effective doses were estimated based on the detailed information on the transportation plan and on the radiological characteristics of waste packages. The results of the calculations show that risk from the transportation of radioactive liquid waste in case of incident-free was low. The doses associated with incident-free road transport were lower than permissible dose limits. The results also show that the maximum individual dose in case of transportation accident was 6.21E-10 Sv which considered less than permissible dose limit.