Food industry wastes are an essential environmental contamination source. A large number of microorganisms including bacteria, yeast and fungi produce different types of enzymes like protease, lipase, chitinase, chitosan and ligninolytic enzyme having high biotechnological interest such as food processing, detergent, textile, pharmaceutical products, and medical therapy. Microbial synthesis of enzymes has been reported to be influenced by various factors such as carbon sources, nitrogen sources, and operating parameters like the temperature and pH. This research has been done in order to develop methods to convert these wastes into useful products. Three proteolytic organisms (Pseudomonas fluorescens, Enterobacter cloacae and Bacillus megaterium) were used in the production of protease and the most effective production was observed at a temperature of 45°C and pH 9. P. fluorescens produced protease best at 3rd production of 48 and 72 hours, E. cloacae produced protease best at 3rd production at 72 hours and B. megaterium produced best at 24 hours of 3rd production. P. fluorescens, E. cloacae and B. megaterium can produce protease and can therefore be used in the degradation of fish waste. These enzymes can also be used medically to control blood clotting target for degrading pathogenic proteins.

Aquaculture has grown significantly in a number of European Union countries over recent years, and it is essentially an economic development within small and medium-sized businesses in remote areas where alternative employment is rather limited. This has been particularly obvious in marine aquaculture, Atlantic salmon in Scotland, Norway and Ireland, sea bass and sea bream (Sparusaurata) in the Mediterranean and mussel (Mytilusedulis) farming by line or raft in Ireland, Spain and France. This overall turn was improved because of a general decrease in catchable wild fish stocks and a rise in public demand for finfish and shellfish resources [1].

While capture fisheries fall short of world demand, annual consumption of seafood has been increasing, multiplying in three decades. Obviously, just as man no longer depends on hunting, he can no longer depend mainly on fishing. As of today, aquaculture provides over a quarter of the world’s seafood supply, a figure the FAO expects will improve by 50% by the year 2030 [2]. Global production of fish and shrimp has been increasing steadily over the last decade and this trend is expected to continue. Of the estimated 131 million tonnes of fish produced in 2000 in the world, nearly 74%, 97 million tonnes was used for direct human consumption. The remainder about 26% was utilized for series of non-food products, majorly for reduction to meal and oil. As a highly perishable good, fish has a significant requirement for processing. In 2000, more than 60% of total world fisheries production underwent some form of processing [3-10].

Food industry wastes are an essential environmental contamination source. Research has been done in order to develop methods to convert these wastes into useful products [11-20]. Possibly, more than 50% of the residue from the total fish capture is not used as food and involves about 32 million tonne's of waste (Figures 1-3). 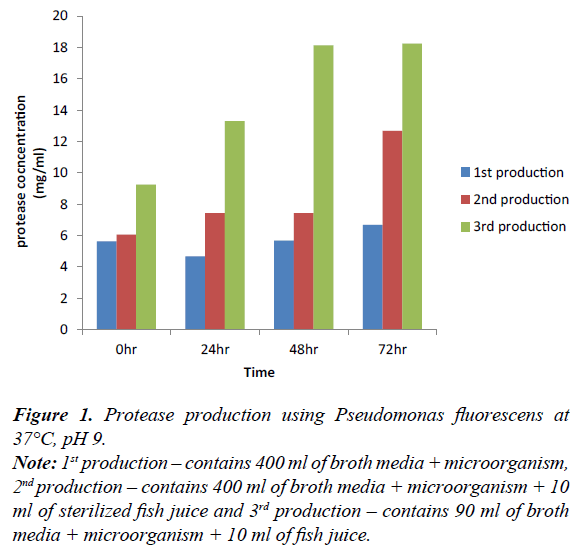 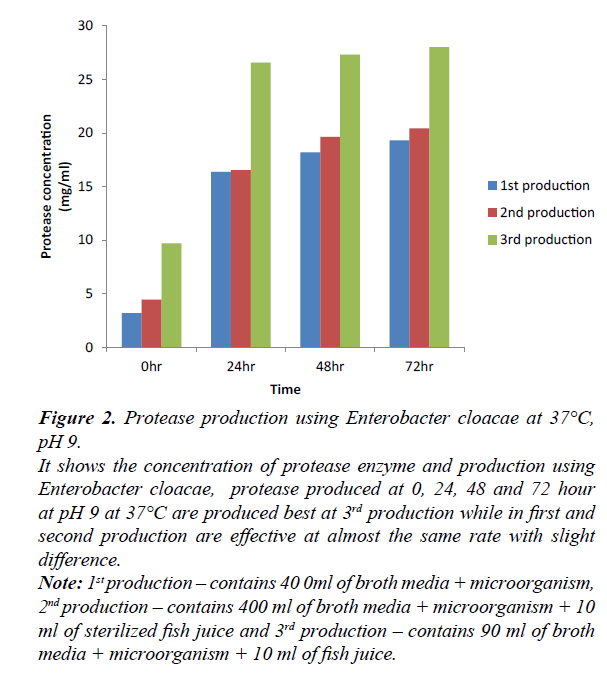 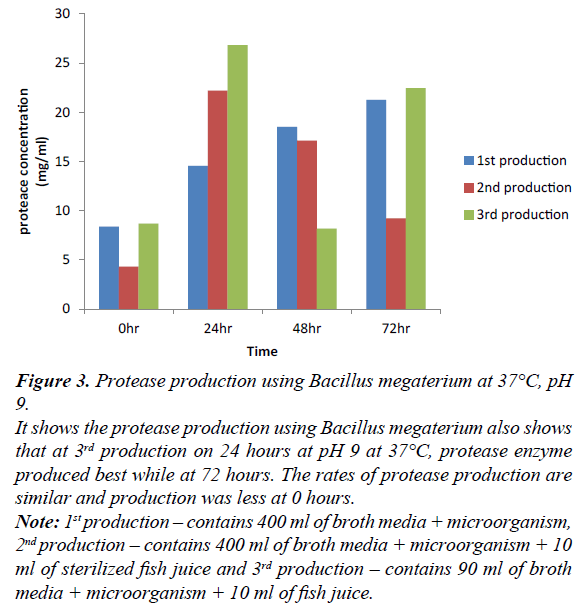 Figure 1 shows the concentration of protease enzyme produced using Pseudomonas fluorescens, at pH 9 at 72 hours in 3rd production; the microorganism tends to produce the highest concentration of enzyme, followed by 2nd production at 0 hr, 24 hr, and 48 hr at pH 9 and at 37°C respectively. First production can also increase with time at same temperature and pH also.

Interestingly, fish by-products provide an excellent source for microbial growth, which can be exploited in producing various metabolites like the lysine, enzymes, etc. [21-25]. A large number of microorganisms including bacteria, yeast and fungi produce different groups of enzymes like protease, lipase, chitinolytic and ligninolytic having high biotechnological interest such as food processing, detergent, textile, pharmaceutical products, medical therapy etc. [26-30]. Microbial synthesis of enzymes has been reported to be influenced by various factors such as carbon sources, nitrogen sources, and operating parameters like the temperature and pH [31-35]. Generally, agro-industrial residues mainly composed of complex polysaccharides are considered the best substrates for microbial growth and enzyme production [36-40]. The economies of this process are governed mostly by the cost and availability of a suitable carbon and nitrogen sources. The problem of waste generation and management in most cities especially in developing has become one of the intractable environmental problems facing urban centres. This situation could be attributed to low level of technology that is not sophisticated enough to handle the high rate of waste generation [41-45]. Human population and ruralurban migration has increased through urbanization, natural increase rate and industrialization, yet the service rendered is not sizeable enough to control the high level of solid waste generated in urban areas and these has contributed to a large extent, the menace and damaging effect of the urban environment [46-50]. Today, the rate at which waste is being generated is about 70% as compared to the total rate of its disposal which is 30%. No doubt [51-55] argued that waste could be anything which may not be directly useful or needed by man. In Nigeria, the dehumanizing effects of these circumstances in our urban lives and brighted environments has often been cited and noted as contributing causes of Nigerian urban decay [56-60]. Cross River State and Calabar in particular is not left out in this scenario despite the huge revenue allocated to waste disposal and management, the rate of waste generation and disposal is really alarming [61-65].

Therefore, the investigation of low cost substrates easily available such as fish processing wastes became a necessity opening new avenues for their effective production and utilization. In this study, the potential of different fish processing by-products tested as growth substrates for microbial enzyme production is presented. The aimed at producing protease enzyme using microorganism that is capable of degrading fish waste.

Fish waste samples were collected in fresh conditions from Fountain University cafeteria. The waste material was sorted out and kept in big plastic bags and transported to the laboratory. The fish waste consists of the skin, scales, shell, fin, head, tail, frame and offal (guts, kidney and liver). The collected samples were taken to the back of the laboratory and were placed on the soil and were left to degrade.

Isolation and identification of bacteria from the soil

The soil was serially diluted by mixing 1 g in 9 ml distilled water, that gives 10-1 dilution. To the first tube of serially arranged 9 ml distilled water, 1 ml of 10-1 dilution was transferred which gives 10-2 dilution. Similarly, dilution was made up to 10-6. Total Bacteria Count (TBC) and Total Proteolytic Bacterial Count (TPBC) of each sample were determined using standard methods on Plate Count Agar, and Skim Milk Agar respectively. 0.1 ml of sample dilution 10-4, 10-5 and 10-6 was employed for plating. Isolates which shows clear zones on Skim Milk Agar were subjected to Gram staining. The isolates were further characterized based on their reactivity to various biochemical tests [66-70].

Clear zones produced by the isolates on Skim Milk agar plates were measured. Thus, the proteolytic isolate which exhibit the highest proteolytic activity (determined by the extent of clear zone around the colony) was selected for further analysis [71-75].

Skim milk agar plates with different pH (7, 9, 13) were prepared and inoculated with the cultured isolate for determining the effect of pH on the proteolytic activity of the isolate [76].

Effect of temperature on selected proteolytic isolate at pH 9

Skim Milk Agar plates with pH 9 were prepared and inoculated with the selected isolate and incubated at different temperatures (25°C, 35°C and 45°C) for determining the effect of temperature on its proteolytic activity.

Extraction of enzyme and dialysis

The cells were harvested by centrifugation at 10000 rpm for 10 minutes at 4°C. The precipitate containing the cell debris was discarded and supernatant treated with 70% Ammonium sulphate and allowed to stand at 4°C overnight. Then the precipitate was centrifuged at 10000 rpm for 20 mins at 4°C. The resulting precipitate was dissolved in 0.9% NaCl and labeled as crude protease extract. The same process was used for the remaining above-mentioned media too. The crude enzyme was partially purified using ammonium sulphate (60% saturation). The precipitated enzyme was used as a crude protease.

The proteolytic activity of crude protease extract was assayed at pH4-10 using the following systems-Citrate phosphate buffer (pH 4 and 5), phosphate buffer (pH 6-8), Glycine-NaOH buffer (pH 9 and 10). The assay mixture will consist of 1.25 ml of respective buffers, 0.5 ml of casein as substrate and 0.25 ml of enzyme extract. The reaction was stopped by adding 3 ml of 5% TCA after holding it at 37°C for 30 minutes. The final mixture was filtered and TCA soluble peptides in filtrate were quantified by measuring the absorbance at 540 nm using Biurets working solution’s method.

Soil samples were serially diluted and dilutions of 10-4, 10-5, and 10-6 were plated on Nutrient Agar, and Skim Milk Agar in which the total bacteria count, total proteolytic bacteria count, and their morphological characteristics were presented in Tables 1-3.

Microorganism that can utilize the milk present in the skimmed milk agar were subjected to various biochemical tests as shown in Table 4 the isolates were suspected to be Pseudomonas fluorescens, Enterobacter cloacae and Bacillus megaterium. Table 5 shows the clear zone measurement of each organism. At 24-hour P. fluoresens shows that there was a little clear zone compared to 48 and 72 hours respectively. A gradual increase in the clear zone was also observed at 24 hours up to 72 hours in E. cloacae. B. megaterium at 24 hour shows no clear zone while at 48-72 hour show clear zones. These may be due to late lag phase of the microorganism (Tables 6 and 7).

Table 6. Effect of ph on all the isolates.

The effect of temperature also of the proteolytic isolate and each isolate were subjected to different temperatures (25°C, 35°C and 45°C). The organisms that shows the most effective was at 45°C on the skimmed milk agar plate shows the widest clear zones.

Table 7. Effect of temperature on the isolates with sma of pH 9.

It shows the effect of pH the proteolytic isolate and each isolate were subjected to different pH of (7, 9 and 13) the isolate that shows the most effective was at pH 9 and has the widest clear zone and these indicates the level of alkalinity suitable for the growth of the microorganisms.

Based on the outcome of this research, organisms capable of producing protease enzymes were identified according to the Tables 3 and 4 after the sample collection and degradation. They were isolated using nutrient agar and skimmed milk agar respectively. The growth on skimmed milk agar shows that microorganisms that can utilize protein are present. Biochemical test was carried out on them and microorganism suspected were Pseudomonas fluorescens, Enterobacter cloacae and Bacillus megaterium. The organisms gotten from this study is in agreement with the study. The effect of temperature and pH on the skimmed milk agar shows that pH 9 and 45°C were effective. Protease enzymes were produced at 0, 24, 48 and 72 hours and at three productions. The first production of protease enzymes using Pseudomonas fluorescens, at 72 hours during the 3rd production is best in all production.

In conclusion Pseudomonas fluorescens, Enterobacter cloacae and Bacillus megaterium are protease enzymes and can be isolated from the soil and can be using in both in the degradation of fish waste and also in the production of protease enzyme that can be useful in food industries, medically, pharmaceutical industries and even agriculturally. Fish waste should not be dumped anyhow because they are have created more good than harm, including the scales are beneficial to the world.

Fish waste should be recycled so as to produce enzyme that are beneficial to the world rather than disposing inappropriately and causing environmental pollution to the community. Utilization fish wastes, fish waste as silage, fish meals for livestock agriculture, pharmaceuticals etc. are also the beneficial use of fish waste. The protease enzyme can be used in industries in the production of baby food like Nan, laundry detergents etc. Protease enzymes are good medically by controlling blood clotting target for degrading pathogenic proteins.