Prevalence and prognosis of cerebrovascular accidents and its subtypes: A cross-sectional study in Hail region, Saudi Arabia

Citation: Nawaf A, Hala A, Ahmed A, et al. Prevalence and prognosis of cerebrovascular accidents and its subtypes: A cross-sectional study in Hail region, Saudi Arabia. J Neurol Neurorehabil Res. 2019;4(1):1-8.

Cerebrovascular accidents or stroke is an important healthcare concern. Ischemic stroke is an acute neurologic deficit that results from focal cerebral ischemia leading to permanent tissue damage (infarction). The cause is commonly associated with atherothrombotic occlusion of large arteries, cerebral embolism (embolic infarction), non-thrombotic occlusion of small, deep cerebral arteries (lacunar infarction), and proximal arterial stenosis with hypotension that decreases cerebral blood flow in arterial watershed zones (hemodynamic stroke). Stroke is being observed as a rapidly growing problem and an important cause of illness and death in Saudi Arabia. The aims of this cross-sectional study were to establish the prevalence and prognosis of cerebrovascular accidents and its subtypes in Hail Region, Saudi Arabia. Data were collected on all patients who experienced CVAs between September 2017–January 2018, used the diagnosis coding program in King Khalid Hospital in Hail, Saudi Arabia. Out of 190 patients 63.7% were male and 36.3% were female. The overall incidence of ischemic stroke after acute myocardial infarction was 85.26%. Hypertension, diabetes mellitus were shows as more risk factors for ischemic stroke type compared with hemorrhagic stroke, and embolic stroke. The overall status of stroke patients were shown 92.1% live and 7.9% were dead. Incidence of complicating hospitalizations with cerebrovascular accident continues to grow and is associated with increased mortality and adverse discharge. This highlights the need for early diagnosis, better risk stratification, and preparedness for need for complex long-term care in this vulnerable population.

Stroke is a major cerebrovascular disease resulting in high mortality and persistent disability in adults across the world. Besides coronary heart disease and cancer, stroke is the commonest cause of death in most industrialized countries [1]. Cerebrovascular accidents (CVAs) are the fifth leading cause of mortality and the leading cause of serious, long-term disability in the United States. Most strokes (87%) are ischemic, caused by thrombotic or embolic occlusion of a major artery [2]. CVA has traditionally been divided into infarcts (embolic or thrombotic) and hemorrhagic lesions based on the pathologic and radiographic appearance. Infarcts are further subdivided into lacunar and cerebral infarcts. Similarly, hemorrhagic lesions are subdivided into intracerebral hemorrhage and subarachnoid hemorrhage (SAH).

CVA or stroke occurs when blood flow to a part of the brain is prevented due to blockage, or rupture of blood vessels [3]. Recent statistics on European cardiovascular diseases indicate that stroke is responsible for 4 million deaths, with over 1.9 million deaths recorded in the European Union [4]. In 75% of the cases, the stroke attack is attributed to blood clot, i.e. ischemic stroke. The remaining cases are attributed to ruptured blood vessel in the brain, i.e. hemorrhagic stroke. The established risk factors, including arterial hypertension, diabetes mellitus, cigarette smoking, micro-vascular rupture, hyperlipidemia, age and observed comorbidity such as sickle cell disease, human immunodeficiency virus/acquired immune deficiency syndrome infection and cerebral malaria are increasingly being encountered in the tropics [5].

Approximately 90% of CVAs were attributed to 10 risk factors that are preventable (hypertension, regular physical inactivity, high apolipoprotein B/A1 ratio, insufficient diet quality, increased waist/hip ratio, psychosocial factors, current smoking, cardiac causes, heavy alcohol consumption, and diabetes mellitus) [6]. Stroke is being observed as a rapidly growing problem and an important cause of illness and death in Saudi Arabia. Therefore, it becomes one of the most imperative social and economic medical issues in the Kingdom [7]. The aims of this cross-sectional study were to establish the prevalence and prognosis of cerebrovascular accidents and its subtypes in Hail Region, Saudi Arabia.

This study was a cross-sectional study. Defining a CVA as an acute complication of certain chronic diseases with clinical manifestations requiring immediate medical care and hospitalization, we collected data on all patients who experienced CVAs between September 2017–January 2018, we used the diagnosis coding program in King Khalid Hospital in Hail, Saudi Arabia city to look for any patient who had CVA in the last five years, we found more than 300 patients there were diagnosed with CVA and had been admitted to the hospital for full assessment and management. The local institutional ethics committee, College of Medicine, University of Hail, Saudi Arabia, approved the research proposal and design (Approval No: EC-0022). We started contacting our patients to have their consent to open their medical records and we received 190 consent. We design a collector form to collect our data, we went through their medical history and some specific lab and radiological investigations. All the data obtained were transferred to an appropriate record form (Figure 1). No additional investigations were pursued with the patients' families or with physicians. 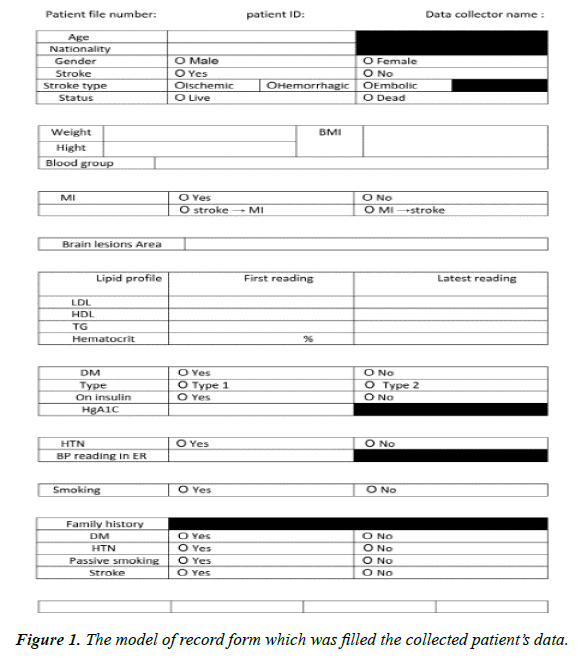 Figure 1. The model of record form which was filled the collected patient’s data.

All the data from record form were entered in a system in the Microsoft Excel® table format then the final file was exported to the Statistical Package for the Social Sciences V.23 (SPSS) for analysis. The age of patients were represented in mean and standard deviation. The categorical variables was expressed as total numbers and percentages. Frequency tables were used to present the distribution of nominal variables. Descriptive statistics were used to assess the baseline demographics; they were carried out by calculating the frequencies and percentages. Summaries for groups of cases were calculated and represented in the legacy dialogs bars with a level of 95% confidence intervals (CI).

Overall, 190 cerebrovascular accidents or stroke patients were reported and stratified by sex. Out of 190 patients 121 (63.7%) were male and 69 (36.3%) were female. The average age of patients were 63.68 ± 15.82 years, 62.66 ± 15.99 were male, and 65.48 ± 15.47 were female. Table 1 represents in total number of patients in the cross tabulation of gender with the stroke subtype. The ischemic stroke shows more in male compared with female. Comparatively male CVA patients are almost double compared with female CVA patients.

Table 1. Shows the cross tabulation of gender with the stroke subtype of patients in Hail region.s 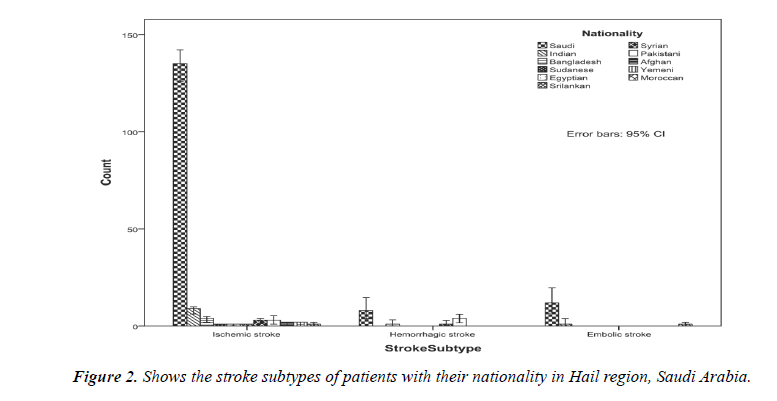 Figure 2. Shows the stroke subtypes of patients with their nationality in Hail region, Saudi Arabia.

Figure 3. Represents the percentage of stroke subtypes in 190 patients with cerebrovascular accidents from Hail region between September 2017–January 2018. 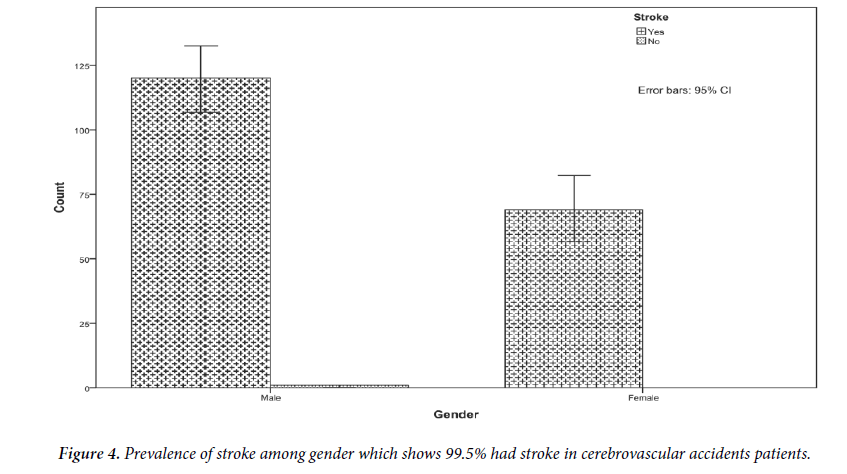 Figure 4. Prevalence of stroke among gender which shows 99.5% had stroke in cerebrovascular accidents patients. 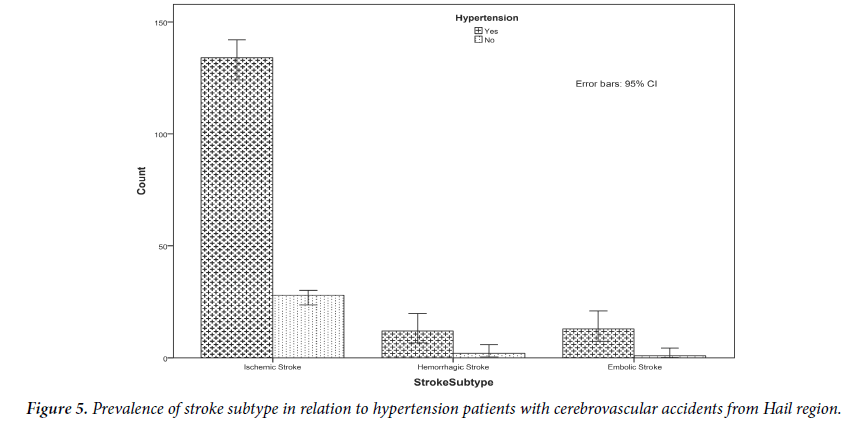 Figure 5. Prevalence of stroke subtype in relation to hypertension patients with cerebrovascular accidents from Hail region.

Figure 6. Prevalence of stroke subtype in relation to smokers hypertension patients with cerebrovascular accidents from Hail region in Saudi Arabia.

Data are represented as status of patients in numbers and percentage with cerebrovascular accidents and its subtypes.

Table 2. Shows the cross tabulation on status of the CVA patients with their stroke subtype.

Cerebrovascular disorders are common conditions leading to significant morbidity and mortality in the population. The generally recognized importance of cerebrovascular accidents (CVAs) as a cause of death has prompted the World Health Organization to sponsor centers in Europe, Asia, and Africa to study this problem [8]. Both CVA incidence and the mortality resulting from CVAs exhibit wide geographic variations, even within a single country [8-12], variations that have not yet been satisfactorily explained [11,13].

In 2007 reported that a major percentage of the patients had not even heard the term “stroke” in the Gulf Cooperation Council (GCC) countries [18]. Obesity, smoking, sedentary lifestyle, etc are the risk factors for stroke. A study indicates in Saudi Arabia that prevalence of stroke among men than women [19]. In another study showed interviewed neurologists about their views on stroke, reports that acute stroke care in Saudi Arabia as inadequate [20].

In 2012 a study reported an alarming deficit in the level of stroke awareness in the Saudi population [21]. Stroke was more frequent in the sixth decade of life with male predominance in both Saudis and non-Saudis [22-24]. A study conducted in King Abdul Aziz University Hospital, Saudi arabia found that there was a high incidence of thrombotic stroke [25].

Across middle east, in Qatar the incidence rate for all strokes 63/100,000 population. But in Libya, the incidence rates for hemorrhagic stroke were 2.7/100,000. Saudi Arabia showed 1.9/100,000 stroke incidence and 10.4/100,000 in Iran [26]. The study from Majmaah Province, Saudi Arabia indicates that noncardioembolic disease was the overwhelming stroke mechanism in this middle-eastern cohort with only 4% of patients have cardioembolic stroke, in comparison to roughly 20% reported in Western cohorts. Further, 59% of the cohort had concurrence of hypertension and diabetes mellitus [27]. This indicates that the major risk factors for CVA are hypertension and diabetes mellitus showed in our study Figures 5 and 7.

The present study describes several notable findings. We observed that patients with CVA are not at an increased risk of stroke death, as compared to age, and sex. The prevalence of cerebrovascular accident (CVA) or stroke is increasing in frequency amongst the general population due to increased prevalence of diabetes and hypertension [28]. Stroke poses the risk of immediate mortality and long-term morbidity in the survivors with residual disability. The commonest underlying etiology of the CVA is vascular occlusion leading to infarction of brain [29]. Hemorrhagic stroke is less frequent than ischemic stroke and is due to aneurysmal rupture or malignant hypertension [30].

In the present study, the risk of CVA in patients with diabetes mellitus was 55.79% of ischemic stroke, 40% of hemorrhagic stroke and 7.37% of the CVA were embolic stroke. Although the incidence of CVA was higher in adult patients with ischemic stroke, we did not find a strong prediction from age and sex. We demonstrated that hypertension was the most significant predictor for CVA. Despite a wide variety of risk factors described for CVAs [39], hypertension is generally accepted as the principal predisposing factor [40]. From this study, several insights and recommendation for improving care extended to stroke patient can be derived.

In conclusion we demonstrated that diabetic and hypertensive patients have higher mortality after incident stroke, but sex and age was not an independent risk factor. Incidence of complicating hospitalizations with cerebrovascular accident continues to grow and is associated with increased mortality and adverse discharge. This highlights the need for early diagnosis, better risk stratification, and preparedness for need for complex long-term care in this vulnerable population.

We are grateful to Professor (Dr). Awdah Al-Hazimi, Dean of College of Medicine, University of Hail, for his encouragement and providing facilities. We render our heartfelt thanks to the CVA patients who permit to access their medical record for this study without any hesitation, we pray God for their relief from the disease.