We present the case of hypertensive and dislipidemic adult patient with a small ostium secundum atrial septal defect with trivial left-to-right shunt in whom an increasing enlargement of the aortic root and ascending aorta reversed the interatrial shunt causing severe dyspnea and oxygen desaturation, constantly elicited during upright position and relieved when he resumed the recumbent position (Platypnea-Orthodeoxia syndrome). Catheter-based closure of the interatrial communication was associated with an immediate increase in systemic saturation and long lasting marked clinical improvement.

Ostium Secundum Atrial Septal Defect (ASD II) with a leftright shunt accounts for 10% of all congenital heart disease and as much as 20%-40% of those presenting in adulthood. It can be asymptomatic through infancy and childhood, though the timing of clinical presentation depends on the degree of left-to-right shunt. By the age of 40 years, 90% of untreated patients have symptoms of exertional dyspnea, fatigue, palpitation, sustained arrhythmia or even evidence of heart failure.

We present the case of an otherwise asymptomatic adult patient with ASD II and mute left-to-right shunt in whom an increasing enlargement of the aortic root and ascending aorta reversed the interatrial shunt causing life-threatening dyspnea with deoxygenation in the absence of elevated right heart pressures.

A 53 years old man, suffering from hypertension, dyslipidemia, coronary artery disease (previous lateral myocardial infarction) and aortic root enlargement with moderate aortic incompetence, underwent left radical nephrectomy for renal carcinoma incidentally discovered by a computed tomography. After surgical operation, he had persistent microcytic anemia: a retroperitoneal hematoma due to spleen rupture was discovered and splenectomy was successfully performed. Few months later he was re-admitted again to hospital because he was noted to have profound respiratory distress and oxygen desaturation to less than 88% when sitting up on room air. The functional respiratory tests did not reveal obstructive and/or restrictive lung disease. Chest computed tomography, spirometry, and lung perfusion scintigraphy showed no findings of lung disease or pulmonary embolism. Oxygen desaturation and dyspnea were constantly elicited during upright position and relieved when he resumed the recumbent position (O2 saturation 66% vs. 94%). This behaviour strongly resembles that occurring in the platypneaorthodeoxia syndrome (POS).

In order to ascertain this hypothesis, the patient was referred to our institution. At admission the electrocardiogram showed synus rhythm, 85 beats/min, incomplete right bundle branch block and delayed QRS transition zone in the precordial leads in addition to low voltage (Figure 1). 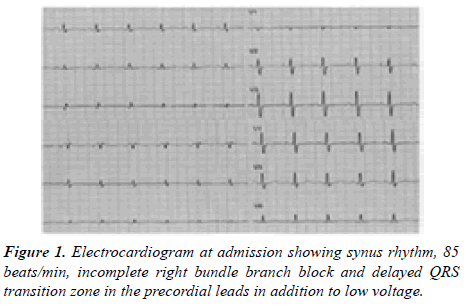 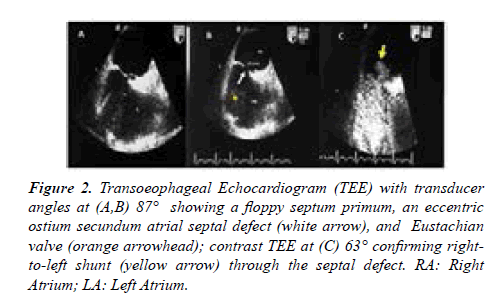 Contrast-enhanced TransCranial Dopper (ce-TCD) was performed according to a standardized procedure [1]. 10 mL of air-mixed saline was injected into the right antecubital vein while the Doppler signal from the right middle cerebral artery was recorded. Less than 10 bubbles were detected in the supine position (single spikes), whereas uncountable bubbles (curtain pattern) were present in the upright position confirming the presence of a large significant posture-dependent RLS (Figures 3A and 3B). 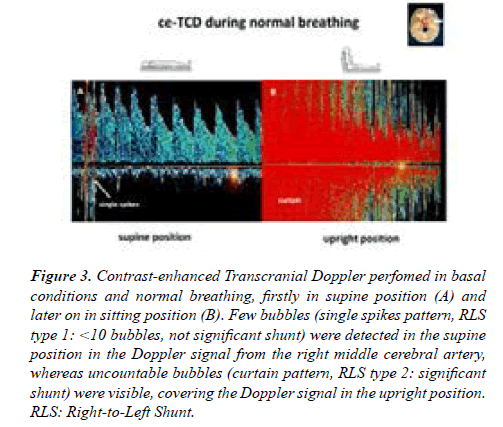 After heart team discussion, it was decided to address his congenital heart disease using a catheter-based technique. An informed consent was signed by the patient. The procedure was performed in the catheterization laboratory under deep sedation and continuous real time 2D/3D TEE color flow Doppler and fluoroscopic guidance. The interatrial comunication was crossed under fluoroscopy with a 6 Fr multipurpose catheter. After placing a standard 0.0035-in- 260 cm exchange wire in the upper left pulmonary vein, stretched diameter by balloon sizing was obtained (15 mm). Afterwards, a 10 Fr transeptal sheath was advanced over the exchange wire into the left atrium. An Amplatzer Atrial Septal Device (16 mm) device was chosen. The left-sided disc was pulled back firmly against the atrial septum, followed by deployment of the right-sided disc. At the end of the procedure and before the release of the device, the position of the occluder was checked both by fluoroscopy and by TEE (Figures 4A-4C). 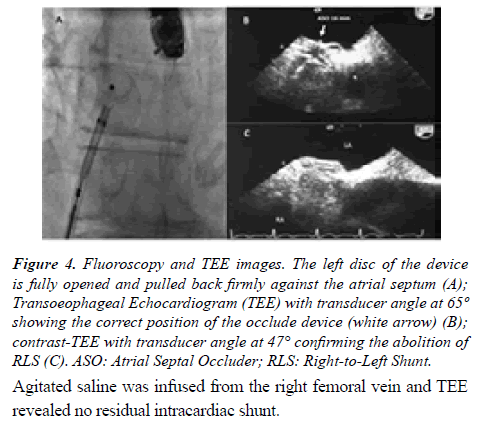 Figure 4:Fluoroscopy and TEE images. The left disc of the device is fully opened and pulled back firmly against the atrial septum (A); Transoeophageal Echocardiogram (TEE) with transducer angle at 65º showing the correct position of the occlude device (white arrow) (B); contrast-TEE with transducer angle at 47° confirming the abolition of RLS (C). ASO: Atrial Septal Occluder; RLS: Right-to-Left Shunt.

Agitated saline was infused from the right femoral vein and TEE revealed no residual intracardiac shunt.

Post-procedure blood gas analysis normalized even in the sitting position and symptoms disappeared completely. He was discharged home in good clinical conditions. Persistent clinical improvement and no changes in arterial oxygenation or RLS in upright position were confirmed at the follow-up.

The incidence of POS is unknown and the literature is limited to case reports. Nevertheless, increasing articles over the past years have elicited the attention of physicians who have acquired a greater awareness of this syndrome.

The most comprehensive review includes 188 patients from 105 case reports, where 167 patients (89%) were found to have POS due to an intracardiac shunt; when considering those involving an intracardiac RLS with normal pulmonary artery and right atrial pressures, 88.3% had a patent foramen ovale (PFO) [3,4].

Notably, aortic root dilation and elongation are very common in the adult population. The dilated ascending aorta is oriented horizontally, compressing the interatrial septum towards the right atrium to lead venous return from the inferior vena cava to the interatrial communication [7-13].

The diagnosis of this syndrome can be challenging because it is largely underdiagnosed due to its specific postural features [14,15]. TTE/TEE allows visualization of atrial septum and provides the opportunity to look for defects, aneurysm or other abnormalities. Nevertheless, the most sensitive and easy to perform modality for non-invasive functional assessment is ce-TCD which probably represents the most suitable tool to quantify RLS with the patient in sitting or upright position, identifying both cardiac and extra cardiac shunts [16]. Of note, testing in the standing position might be warranted when postural variations of RLS can be pathogenically relevant like in POS [17].

The primary anatomical defect in our patient is represented by ASD II associated with an intracardiac shunt but not large enough to generate right volume overload; additionally, the concomitant presence of an associated secondary anatomical variant (Eustachian valve) and two functional factors (aortic root-ascending aorta enlargement and two previous abdominal surgeries) could have certainly increased the interatrial septum distortion/displacement and mobility and foster markedly RLS as it happens in PFO patients. Catheter-based closure of the interatrial communication is a low risk and effective treatment for POS and it is associated with an immediate increase in systemic saturation and symptom improvement [18-20].

This case highlights the importance of considering POS when evaluating unexplained dyspnea and arterial desaturation. Definitive treatment of POS with an identified interatrial communication is surgical or percutaneous closure of the defect, the latter being mostly the first-line preferred method. Ce-TCD represents the most sensitive and reliable modality for non-invasive functional assessment of RLS.

No sources of funding have supported this Clinical Image.

The authors have read, edited and reviewed the manuscript.