Plasmablastic lymphoma presenting as a large cervical-thoracic mass: Report of a case and literature review.

Plasmablastic lymphoma (PBL) was first described in the jaws and the oral cavity of human immunodeficiency virus infected patients. This subtype of lymphoma is considered as a variant of the diffuse large B-cell lymphoma with a phenotype of plasma cell differentiation that expresses markers such as CD38, CD138 and MUM1 protein. HIV- associated PBL is associated with an aggressive clinical course, poor prognosis and shot survival even in the era of highly active antiretroviral therapy (HAART). Primary soft tissue Non-Hodgkin lymphomas (NHL) are very rare and account only the 0.1% of the cases. Generally, NHL of the soft tissue present as large subcutaneous masses, with fast growing and without evidence of nodal or skin involvement. Here we describe a primary NHL of the soft tissue in an HIV infected patient.

Plasmablastic lymphoma (PBL) was first described in 1997 by Delecleuse et al. as a subtype of diffuse large B cell lymphoma (DLBCL), primarily located in the oral cavity and strongly associated with human immunodeficiency virus infection (HIV) [1]. In the AIDS population, PBL represents the third subtype of Non-Hodgkin Lymphoma (NHL) in frequency after the DLBCL and the Burkitt´s lymphoma [2]. PBL shows a male predominance; the patients are generally younger and with a large intra-oral masses as clinical presentation [3]. Also, in the last years, we can see numerous and different clinical forms as intrabdominal large lymphadenopathies, liver involvement and bone marrow infiltration as the single manifestation of the disease. About 70% of AIDS-associated lymphomas are NHL. The incidence of extranodal NHL of the soft tissues is low and account only 0.1% of the cases [4]. Here, we describe a patient with AIDS who developed an aggressive PBL presenting as a large cervical-thoracic mass.

A 47-year-old man was admitted to our HIV/AIDS Department with two-month history of fever, weight loss and night sweats. He had history of alcoholism, inhalation and intravenous drug use and diagnosis of AIDS since 1991, with several episodes of bacterial pneumonia. The patient had a poor adherence to highly active antiretroviral therapy (HAART) and, in consequence, the course of HIV infection was uncontrolled. According with his story, it is probable that he acquired HIV infection secondary to unprotected heterosexual intercourse or intravenous drug abuse. On physical examination, patient was febrile (38°C); abdominal examination revealed hepatomegaly. A large, subcutaneous, nonfluctuant mass was palpable; and involved the right cervical lateral region and infiltrate the totality of the supraclavicular gap and the upper thoracic area (Figure 1). The patient referred that this tumor lesion increased rapidly in size during the last month. No peripheral lymphadenopathy was detected. Relevant laboratory findings showed a mild anemia (hemoglobin 11.60 g%, hematocrit 34%), white blood cells 8700/mm3 , platelets 254000/mm3, erythrocyte sedimentation rate 90 mm/h, elevated lactate dehydrogenase level 2313 U/L and alkaline phosphatase 750 U/L. The CD4 T-cell count was 73 cells/μL. Renal and liver function were normal. Hepatitis C antibodies were positive. A computed tomography (CT) scan of the neck and thorax (Figure 2) revealed a large and heterogeneous mass which involved the soft tissue of the right cervical region, the supraclavicular gap and the upper area of the thorax. The tumor showed a soft tissue density, areas of necrosis and infiltrated the right clavicle. An incisional biopsy was performed; the histopathological examination of biopsy sections showed a diffuse proliferation of atypical lymphoid cells with extensive areas of necrosis (Figure 3). The atypical infiltrate was composed predominantly by a large plasmablastic cells with hyperchromatic and eccentric nucleus, prominent nucleoli and abundant basophilic cytoplasm (Figure 4). 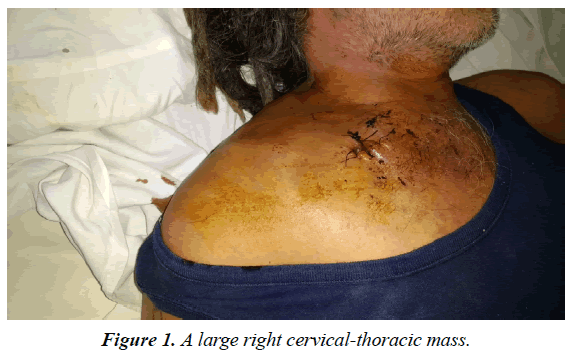 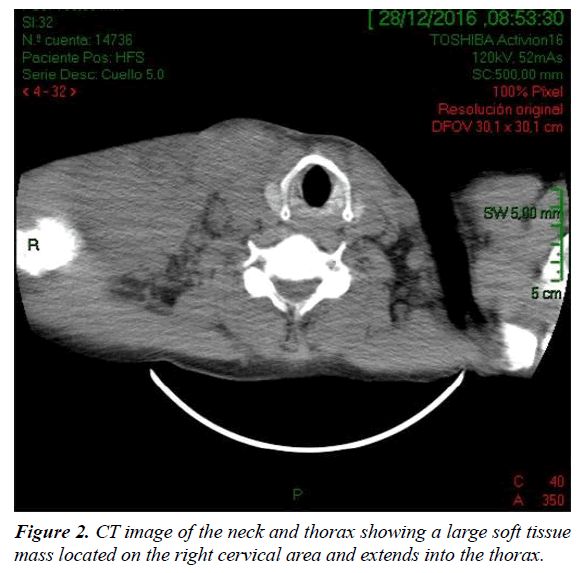 Figure 2: CT image of the neck and thorax showing a large soft tissue mass located on the right cervical area and extends into the thorax. 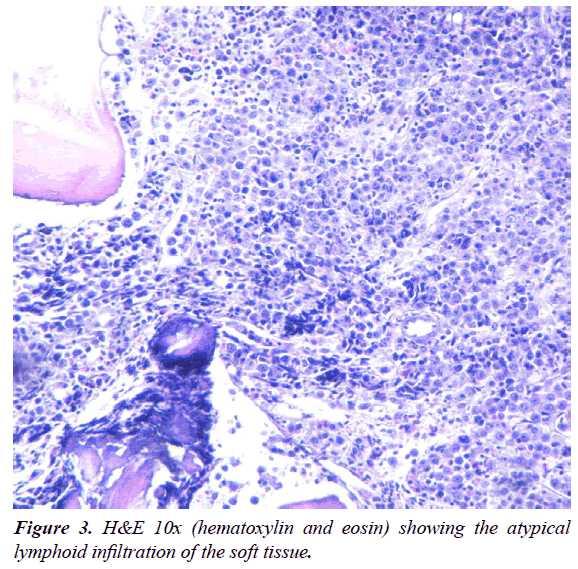 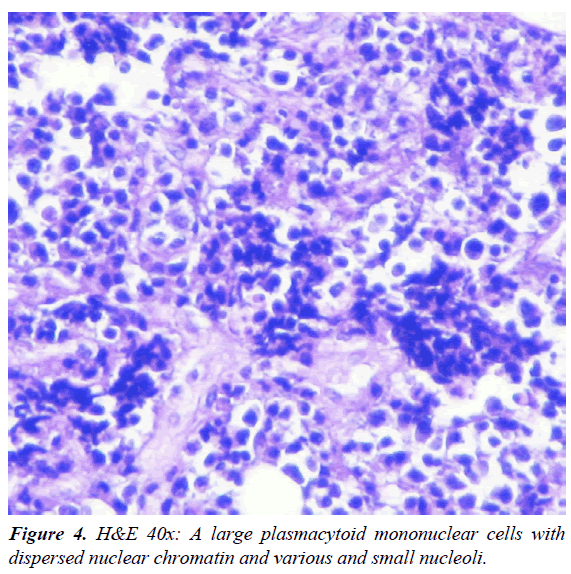 Immunohistochemistry (IHC) and in situ hybridization (ISH) for Epstein-Barr Virus genome (EBER) were performed. IHC revealed that the majority of cells expressed the plasma cell markers, CD138, MUM1 (Figures 5 and 6) with negative for CD3, CD20, CD10, CD45, BCL6 and BCL2. The IHC for Ki67 index performed on paraffin embedded sections was 95%, revealing a high proliferation rate of the neoplasm (Figure 7). ISH revealed extensive positive for Epstein Barr virus (EBV) encoded RNA (EBER) in the atypical cells. Bone marrow biopsy showed and extensive infiltration by an atypical proliferation of lymphoid cells. A CT scan of the abdomen and pelvis did not show any abnormal findings. The histological morphology and the plasma cell immunophenotype confirmed the final diagnosis of soft tissue PBL. Patient died with a short survival after PBL diagnosis due to an aggressive and rapidly clinical course of the neoplasm, without the possibility to receive chemotherapy because his poor clinical status. 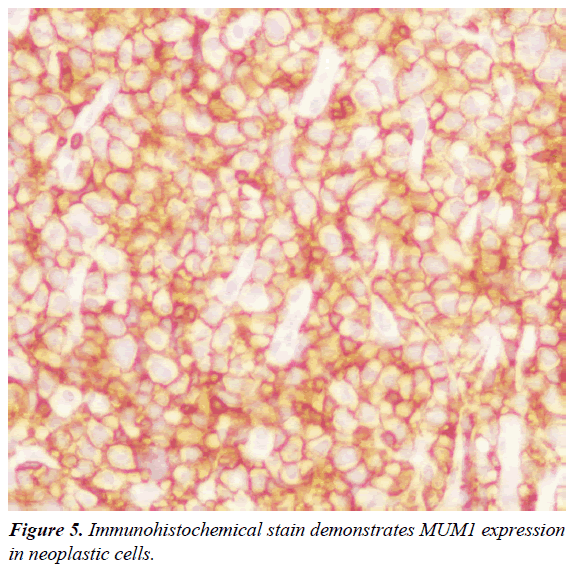 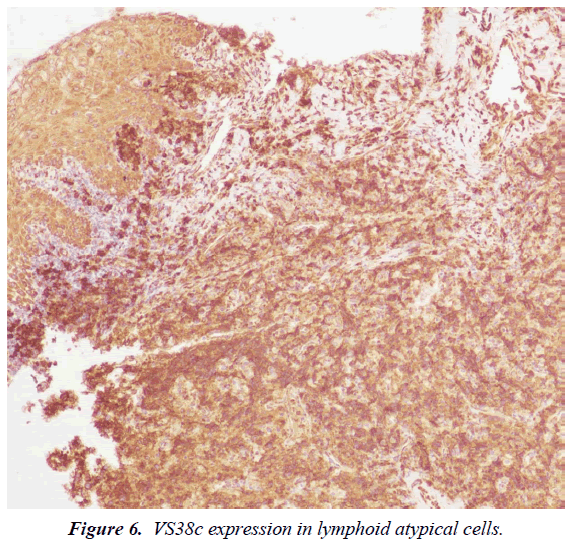 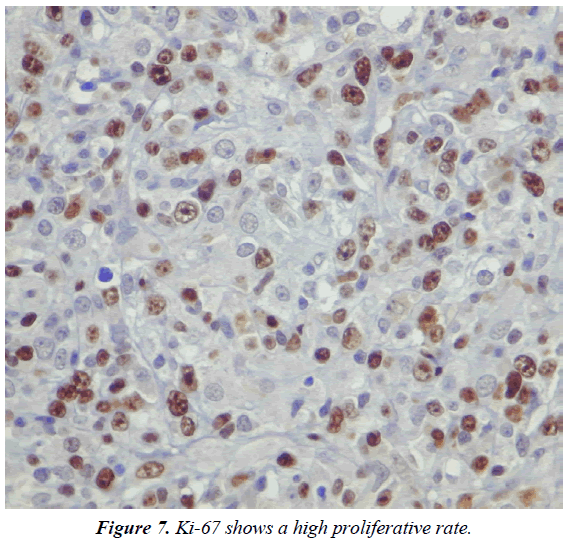 Patients with HIV infection have a high risk to develop NHL. The extranodal involvement as initial manifestation and the rapid progression are two common findings in these patients [5]. Plasmablastic lymphoma (PBL) is an aggressive B-cell malignancy strongly associated with human immunodeficiency virus (HIV). PBL is currently classified as a subtype of NHL and represents approximately 5% of all NHL in HIV positive patients. However, PBL was also described in HIV-negative patients [6]. The World Health Organization (WHO) classification includes PBL as a subtype of DLBCL characterized by an unusual immunophenotype with a loss or complete absence expression of the cell markers (CD20 and CD79a) as well as the common lymphocyte antigen (CD45) [7]. The tumor is characterized by a strong expression of plasma cell antigens such as CD38, CD138 and the multiple myeloma oncogene-1 (MUM1). Also, PBL show an elevated proliferation index (Ki67) [8]. CD38, CD138, or MUM1 was positively expressed in more than 80% of patients and represents the basis of the histopathological diagnosis [9]. Strong IHC expression of CD38, CD138 and poor or absent expression of CD20 and CD79a are the principal criteria for the diagnosis of PBL [1-10].

The most common location of this neoplasm in AIDS patients is the oral cavity, including the hard palate, the gingival and the jaw, with large and generally ulcerated painless masses [11]. Additionally, some patients present with B symptoms as prolonged fever, night sweats and weight loss [12]. In a large study, Castillo et al describe the presence of b symptoms B in 33% of HIV-positive and 50% of HIV-negative patients at diagnosis [3].

The infiltration of bone marrow tissue is a rare finding in patients with PBL. Bone marrow involvement is one of the main related finding with the poor prognosis of this subtype of lymphoma [13]. PBL was also described involving subcutaneous soft tissue, as we can see in our patient [12-14]. Extranodal disease is another of clinical findings related with a short survival and poor prognosis in patients with PBL [15,16].

Very few cases of PBL have been described in HIV-negative patients, especially those under solid organ transplantation or other immunosuppressive therapies [17,18]. In a large review of 228 cases of PBL, 157 (69%) affected HIV-positive patients and 71 (31%) involved HIV-negative. In the group of HIV-negative patients, a third had other causes of immunosuppression. The study authors point out that HIV-positive patient had a better response to chemotherapy, as well as longer survival. This finding suggests that HIV might influence the survival rate of PBL [3-19].

As with other AIDS-related lymphomas, Epstein-Barr virus (EBV) is strongly associated with the pathogenesis of PBL. EBV infection has been demonstrated in 74% of PBL cases [20]. In the pathogenesis of PBL it is verified that EBV produces an overexpression of c-MYC; this translocation is more frequently in EBV-positive lymphomas in comparison with EBV-negative and correlates with a poor survival [21,22].

In our experience, extensive local invasion, rapid disseminated disease and intra-treatment resistance to chemotherapy are common findings in HIV-associated PBL and are related with a higher rate of relapse and death [23].

Soft tissues lymphomas at presentation are considered to be primary only when clinical and complementary laboratory and imaging studies excludes other sites of disease [4]. By definition, soft tissue lymphomas only include those masses that involve the subcutaneous and the musculoskeletal tissues; in our experience, these neoplasms are characterized by his fast growth with the frequent involvement of the adjacent tissues as the skin and the bone [4]. In a series that included 19 patients with soft tissue NHL, the most frequent histopathological subtype was DLBCL [4]. However, we presented a short series that included 4 patients with primary soft tissue NHL [12]. Two of them were PBL, as well as the patient described in this case report. In our series, the chest wall was the most frequent site of location [12]. Ultrasonography of subcutaneous and muskuloskeletal tissue must be done early because, in our experience it provides valuable information about the extent and the characteristics of the soft tissue masses [12-24]. In addition, clinicians, internists, generalists, oncologists and infectologists must perform an early excision biopsy that is necessary to confirm the diagnosis and to determine the histopathological subtype [12].

Actually, and as in any AIDS-associated neoplasm, the main treatment of PBL include primarily HAART associated with chemotherapy and the occasional use of consolidate locoregional radiotherapy. Intrathecal central nervous system chemoprophylaxis should be included with each of the six cycles of chemotherapy. Despite these advances, PBL has a poor prognosis, with a relapse rate of approximately 60% in the first year Kinare et al., Rafaniello Raviele et al. and Castillo et al. [24,25] reported that the early clinical stage was associated with a longer survival in a study of 248 PBL cases, including 157 HIV-positive cases. The authors further confirmed this finding in a recent study involving 47 HIVpositive cases diagnosed in Europe, United States, and South America [7]. A retrospective study, using a regime based on DA-EPOCH (dose-adjusted etoposide, prednisone, vincristine, cyclophosphamide and doxorubicin) demonstrated an improved in overall survival (17 vs 7 months, p< 0.04) in comparison with CHOP (cyclophosphamide, doxorubicin, vincristine and prednisone) [7,20] compared CHOP or CHOP-like regimens with more intensive chemotherapy (CODOX-M/IVAC) and no demonstrated benefits in overall survival despite HAART. Several studies demonstrated that the addition of HAART to the chemotherapy had a favorably impact on the survival of patients with diagnosis of HIV-associated PBL [10,18,26]. Additionally and only in a few number of cases, HAART without chemotherapy has been associated with spontaneous remission of PBL [27,28].

In conclusion, clinicians and internists should be included NHL in the differential diagnosis of all soft tissue masses in patients with advanced HIV/AIDS disease. Early diagnosis followed by HAART plus chemotherapy is necessary to achieve a good clinical outcome in this kind of patients. 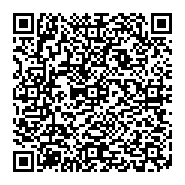