The Cauvery River is the main water source for many places of Tamil Nadu. It is highly polluted in Erode district due to improper management of textile effluents. This study was carried out to analyse the phytoplankton diversity of Cauvery River at Pallipalayam in Erode district, Tamil Nadu, India. Planktons are the basic food source of aquatic ecosystem. Phytoplankton diversity is one of the most important ecological indicators for assessment of water quality. This study was designed to analyse the phytoplankton during period of July 2017 to June 2018 and the results were recorded periodically. The results revealed that the diversity of Phytoplankton is good indicators for the river ecosystem and influenced by quality of river water.

Phytoplanktons are the primary producers forming the first tropic level in the food chain. Diversity of planktonic organisms is quite high in fertile standing water bodies. Phytoplankton diversity responds rapidly to changes in the aquatic environment particularly in relation to silica and other nutrients (Chellappan 2008). Shukla et al. (1989) have found the primary productivity of river Ganga at Varanasi is adversely affected by industrial effluents and untreated city sewage released into the river. The growth and attrition of phytoplankton population in rivers are thought to be subject to the same general environmental factors as those in lakes- chemical factors (inorganic nutrient concentrations, primarily phosphorus and nitrogen), physical factors (light, temperature), and biotic factors (competition, grazing) (Wetzel 1983, Reynolds 1988). Phytoplankton forms the vital source of energy in the fresh water environment. They initiate the fresh water food chain, by serving as food to primary consumers, which include zooplankton, finfish, shell fish and others (Tas et al. 2007). In contrast to lakes, however, phytoplankton in rivers may also be affected by hydrological factors such as river discharge and water residence time. An inverse correlation between phytoplankton biomass and river discharge has been observed (Jones 1984, Jones and Barrington 1985, Reynolds 1988). Increases in river discharge are believed to decrease phytoplankton biomass by shortening residence time and, consequently, the available for plankton to develop (Baker and Baker 1979, Reynolds 1988). Present study highlighted the distribution and abundance of the phytoplankton in the Cauvery River, Tamil Nadu.

The Phytoplankton sampling was carried out for a period of six month from July 2017 to June 2018 in Cauvery River at Pallipalayam. The collection protocol included weekly sampling of phytoplankton from in the site during early hours of the day (4.00 am to 6.00 am) for a period of six month. The sample 50 litters of surface water were collected periodically every month filtered through standard plankton net. Water samples were collected from selected habitats for six months from preserved with 4% formalin. Further for identifying the phytoplankton and studying their diversity, a drop of preserved phytoplankton sample were placed in Sedgwick-Rafter counting chamber and observed under a light microscope required magnification(× 10 initially, followed by × 40) (Figure 1). 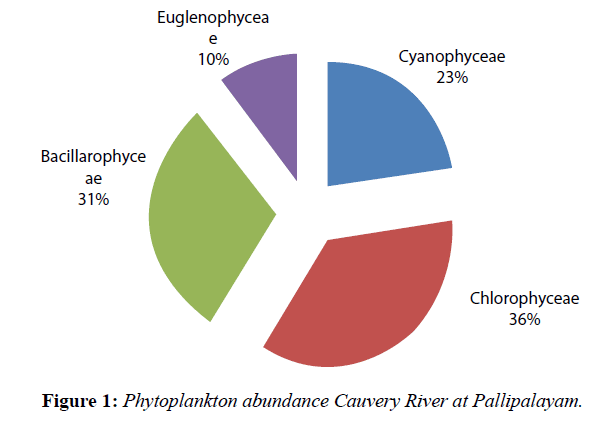 The Chlorophyceae were recorded during the study period. Chlorella sp., Ankistrodesmus sp., Closterium sp., Elaktothrix gelatinos and Closterium dianae sp., were the dominant species among the other species. The highest total number of Chlorophyceae was recorded (Table 1). The phytoplankton fluctuates monthly and its productivity was high during June and low during October as evidenced earlier by Sadguru et al. (2002). Adesalu and Nwankwo (2008) reported that Closterium sp. as bacterial indicators of long standing pollution or hazardous pollution and increase with an increase in nutrients. Sreenivasan (1963) have observed that the peaks of phytoplankton occurred at different period in different year. Margalef (1968) suggested that phytoplankton population in fertile water is more diverse than those in fertile water.

The overall view of the present investigation reveals diversity of phytoplankton in Cauvery River at Pallipalayam, Tamil Nadu. In the present investigation, Chlorophyceae was found to dominate the population in the water body than Cyanophyceae, Bacillarophyceae and Euglenophyceae. Rai LC (1978) has recorded the dominance of chlorophytes at higher temperature in river Ganga and Yamuna at Allahabad. The Bacillarophyceae group present higher than Cyanophyceae. The Cyanophyceae group present higher than Euglenophyceae. Pandey BN et al. (1995) Abundance of Cyanophyceae was recorded of high values of temperature, free carbon dioxide, hardness, BOD and richness of nitrate and phosphates. Euglenophyceae was the least dominant group during study period. It water body it is obvious that steps should be taken immediately for the prevention of pollution in water body. The authorities should take necessary action and the farmers also advised present run off water after applying pesticides in the agricultural field to prevent mixing of effluent water especially from textile industries and to give awareness to the public to avoid mixing of domestic water. All level of people will co-operate and give hand for saving the holy river.

My sincere thanks to Professor Dr.T.Chitra Associate Professor and Head, Department of Zoology, Erode Arts and Science College, Erode and thanks to all my professors for their encouragement of this work.