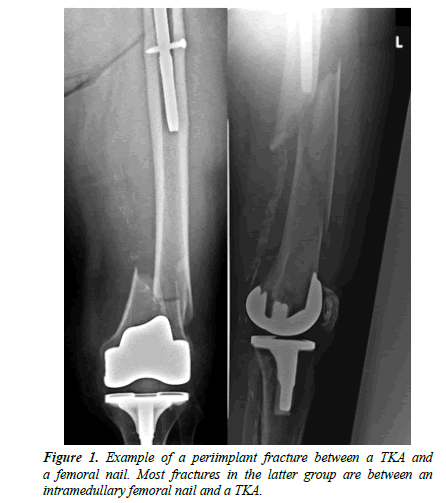 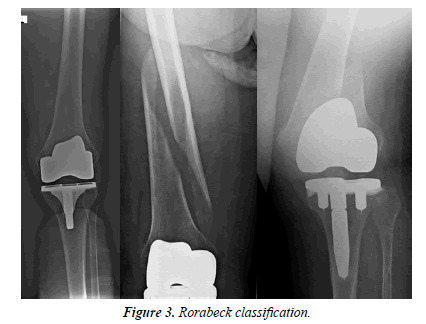 • Type A: Fracture in trochanteric region

• Type B: Fracture around stem or just below it

Type 3: Loose or failing prosthesis regardless of the fracture displacement.

Modified the Vancouver classification in order to classify interprosthetic femoral fractures. He distinguished interprosthetic fractures into three types, depending on the fracture site and the vicinity of the prosthesis:

Type I: No adjacency.

Type II: Adjacency to one prosthesis.

Type III: Adjacency to both prostheses.

Extension of the Vancouver, Rorabeck and Platzer classification

Periprosthetic femoral fracture around revision prosthesis of the hip

On the basis of several examples we would like to demonstrate our considerations below:

An 88-year-old female fell at home. Several years ago a total hip replacement was changed due to loosening of the prosthesis and revision prosthesis (Prevision Modular Hip Revision Stem - B. Braun-Aesculap, Tuttlingen, Germany) was implanted.

A 77-year-old male fell at night at home. X-rays showing a distal periprosthetic femoral fracture with a rotating-hinge prosthesis (B. Braun-Aesculap, Tuttlingen, Germany).

An 88-year-old patient fell at home. Even before the fall, the patient was restricted in her mobility after several revision surgeries of the knee including a change of the TKA due to infection. On x-rays, there was an interprosthetic femoral fracture with several cerclages (Figures 4-6). Although we suspected a loosening of the distal prosthesis, both prostheses were firm. We performed an open reduction and internal fixation with a 16 hole 4.5 mm laterally placed LC plate (Figure 7). We mobilized the patient with full weight-bearing. There were no wound healing disturbances or signs of infections. The patient was discharged in a rehabilitation clinic. 4 weeks after operation the patient fell again due to hypoglycemia. Radiologically, there is a bending of the LC plate of about 40° (Figure 8). The LC plate was removed and replaced by a 16 hole LISS plate together with a 12 hole 4.5 mm LC plate ventrally (Figure 9).

Figure 4: Pre – and postoperative X-rays of a periprosthetic femoral fracture with a revision prosthesis of the hip stabilized with two cerclages.

Figure 5: Pre - and postoperative X-rays of a periprosthetic femoral fracture in a patient with a rotating-hinge prosthesis stabilized with the LISS System as well as 2 cerclages. 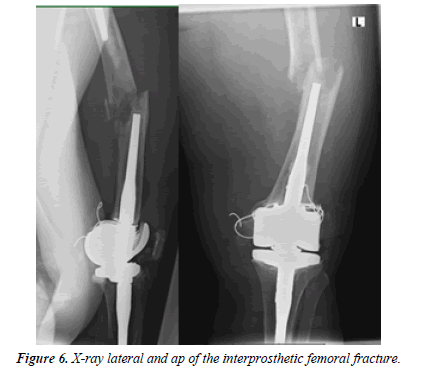 Figure 6: X-ray lateral and ap of the interprosthetic femoral fracture. 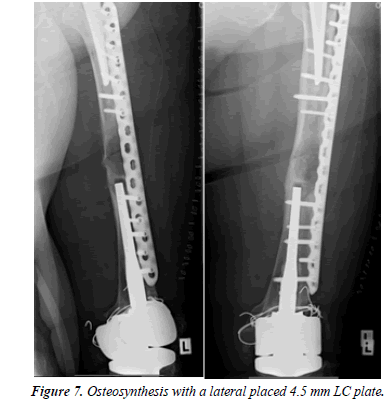 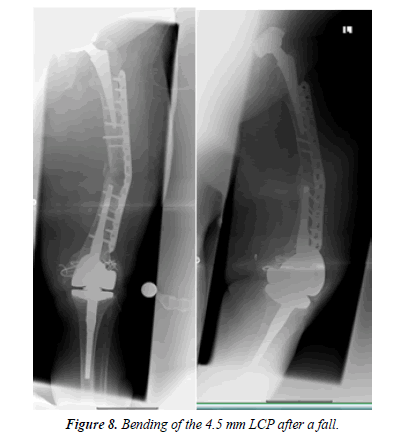 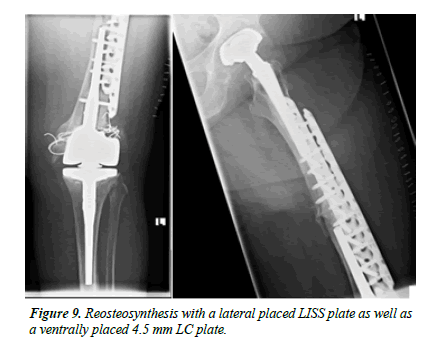 An 86-year-old female patient fell at home. X-rays showed an interprosthetic femoral femur fracture with a TKA as well as revision THA (Figure 10). During primary and revision surgery of the knee, a periprosthetic fracture occurred so cerclages were necessary. The patient was operated with a 13-hole LISS plate as well as 2 × cerclages (1.5 mm steel) and a proximally placed attachment (Figure 11). A proposed partial loadbearing could not be maintained due to incompliance so that we mobilized the patient with full load. The follow up x-rays showed a tipping of the distal femur with delayed fracture healing. Overall, there was extremely poor fracture healing with poor bone quality. (Figure 12) 8 weeks later the patient fell on more time with breakage of the LISS plate (Figure 13) The broken LISS plate as well as the bone cement was removed. We treated the patient with a surgical debridement, together with a reosteosynthesis with a 13 hole LISS plate as well as filling of the defect with cancellous bone graft which was taken from the not affected femur with a Bone Graft Harvesting Set [RIA Reamer-Irrigator- Aspirator] (Figure 14). Partial loadbearing was again not possible. The patient was discharged after completion of wound healing. X-ray controls showed a nonunion. This time the LISS plate was removed and replaced by another angular stable plate together with an additional ventrally placed 4.5 mm LC plate. The central defect was filled with 40 ml of Refobacin Palacos (Figure 15). 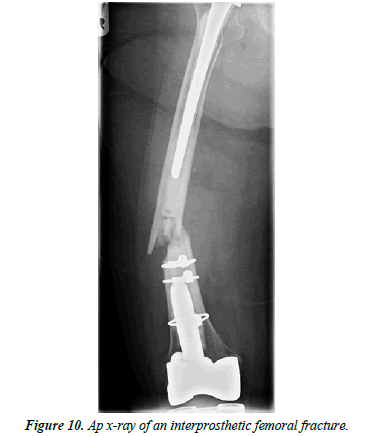 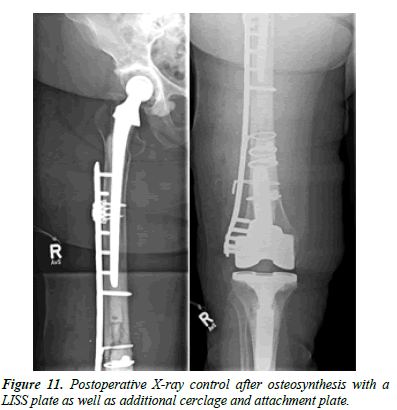 Figure 11: Postoperative X-ray control after osteosynthesis with a LISS plate as well as additional cerclage and attachment plate. 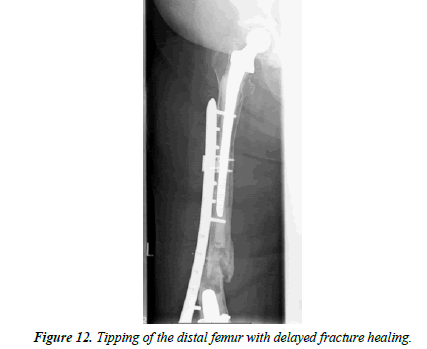 Figure 12: Tipping of the distal femur with delayed fracture healing. 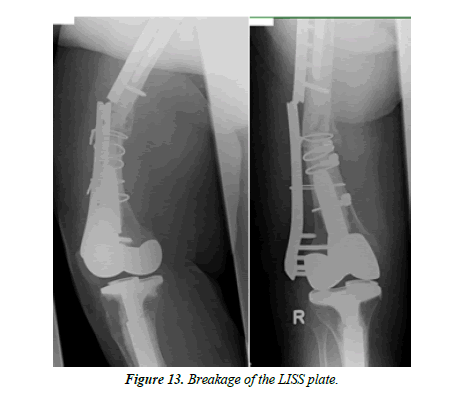 Figure 13: Breakage of the LISS plate. 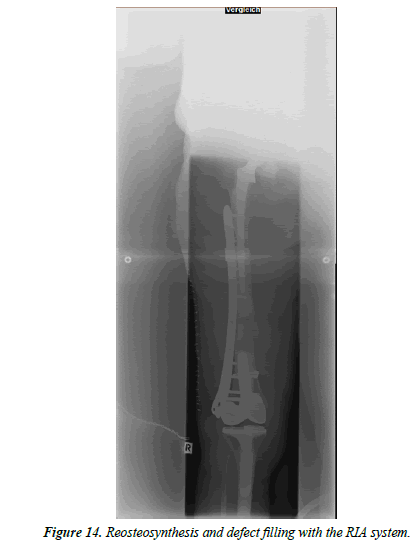 Figure 14: Reosteosynthesis and defect filling with the RIA system. 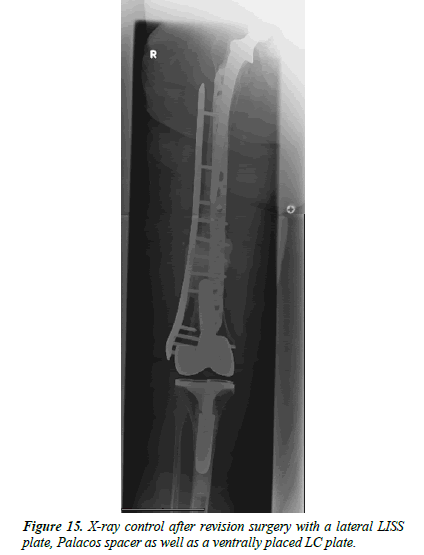 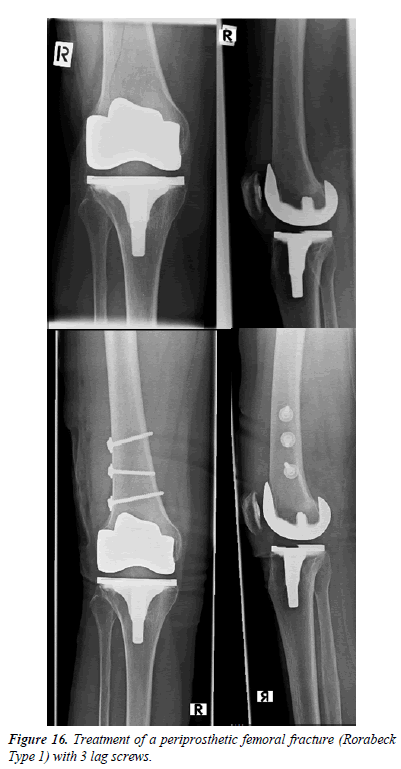 The central weak point of the extension of the classifications is that no therapeutic recommendation result from this. While the Vancouver and the Rorabeck classification always provide conclusions about the treatment options, for example whether the prosthesis should be changed or an osteosynthesis is sufficient, this is not the case with the new types.

We are convinced that in future we will see even more types of periprosthetic femoral fractures.

The author’s declared no potential conflicts of interest with respect to the research, authorship, and/or publication of this article.

Our institutions do not require ethical approval for reporting individual cases or case series.

The author[s] received no financial support for the research, authorship, and/or publication of this article.