We present a case of successful salvage fasciectomy after initial collagenase Clostridium histolyticum (CCH) injection for the treatment of Dupuytren’s contracture. We did not find any remarkable scarring around the Dupuytren’s cord and nodule three and a half years after the initial CCH injection. Pathological findings revealed the previously ruptured cord and partial continuity of the collagen tissue. If there is a sufficient duration between initial CCH injection and salvage surgery, fasciectomy can be performed without an adverse effect of the enzyme around the Dupuytren’s cord and nodule.

Dupuytren’s contracture (DC) is a fibroproliferative disease of the palmar fascia with unknown etiology [1]. Abnormal fibroblasts and myofibroblasts of the palmar fascia have been implicated in disease progression [1]. DC tends to worsen and progress with age, resulting in compromised hand function due to finger contractures. Treatment options for contractures include cutting of the Dupuytren’s cord (fasciotomy) or surgical resection (fasciectomy) [1]. Recently, collagenase Clostridium histolyticum (CCH) injection has been approved by the Food and Drug Administration (FDA) in the United States following the results of a double blind, placebocontrolled, multicenter trial that demonstrated its effectiveness [2]. In 2015, CCH was also approved by the Ministry of Health, Labour and Welfare in Japan [3].

Although CCH injection is a less invasive nonsurgical treatment option for DC, it is not without its associated complications. In fact, the complication rate of CCH injection was comparable with that of surgery in one study [4]. Flexor tendon rupture is one of the most serious complications of CCH injection with an incidence of 0.3% [4]. Less severe complications include subcutaneous inflammation and secondary scarring. In a case report of flexor tendon rupture due to CCH injection, second stage reconstruction with a tendon graft was performed because of extensive soft tissue inflammation around the ruptured flexor tendons [5]. Another limitation of CCH injection is recurrence. In one study that followed patients after CCH injection with more than 20 degrees of flexion contracture, 47% (291 of 623) of cases recurred at 5 years [6]. Salvage fasciectomy after initial treatment with CCH injection may be a suitable management option, but this surgical technique requires a skilled operator since the inflammatory cascade will be stimulated around the injected site, and secondary subcutaneous scarring may be present.

We report herein a case of salvage fasciectomy at three and a half years after initial CCH injection with pathological findings of resected Dupuytren’s cord and nodule.

This retrospective case report did not require the approval of the institutional review board. The patient gave informed consent for his anonymized data to be published.

A 69-year-old man presented with a history of progressive right little finger contracture. He first noticed the painless nodule on the ulnar side of the right palm five years prior to presentation at our hospital. His past medical history was significant for lip cancer that was surgically treated and in remission. Physical examination revealed 45-degree flexion contracture of the metacarpophalangeal (MP) joint of the little finger with a palpable pretendinous cord and Dupuytren’s nodule on the volar side of MP joint (Figure 1A). 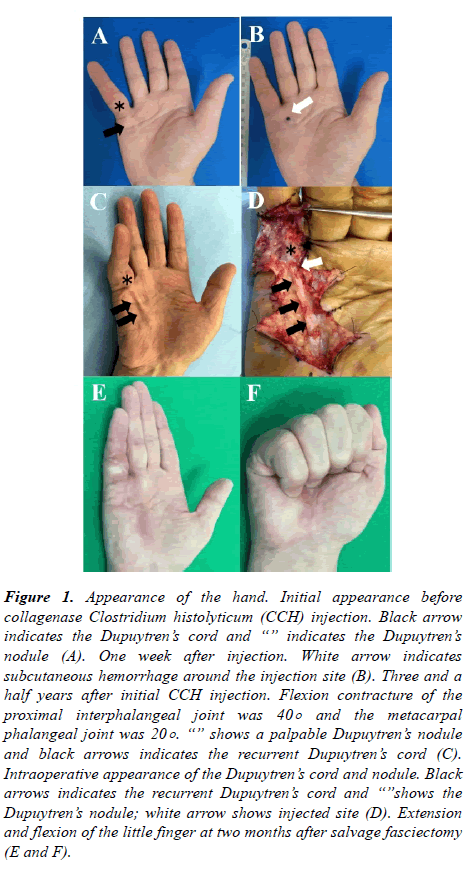 Since the patient suffered from contracture of the hand, we discussed treatment options including fasciectomy and CCH injection, and he selected the latter. CCH (0.58 mg) was injected into the Dupuytren’s cord located 1 cm proximal to the MP joint of the little finger, and the finger was successfully manipulated the day after injection.

The patient was reviewed at 7 days (Figure 1B), 30 days, and 3, 6, and 12 months after the procedure; there were not significant complications. After one year, he was monitored every six months.

One and a half years after initial CCH injection, he developed flexion contracture of the proximal interphalangeal joint of the right little finger, and this progressed gradually up to 40 degrees of extension deficit. Three years after initial CCH injection, flexion contracture of the MP joint of the same finger occurred and progressed up to 20 degrees of extension deficit, and his right hand function became limited due to these contractures. He was diagnosed with grade 3 contracture of his right hand as defined by the Meyerding classification (Figure 1C) [7]. We re-discussed treatment options with the patient, and he selected surgical fasciectomy. 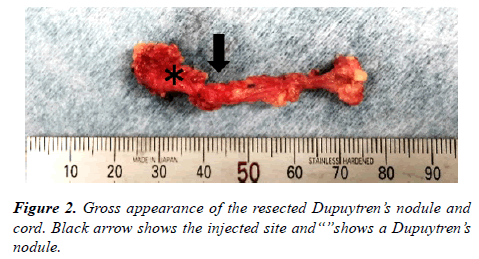 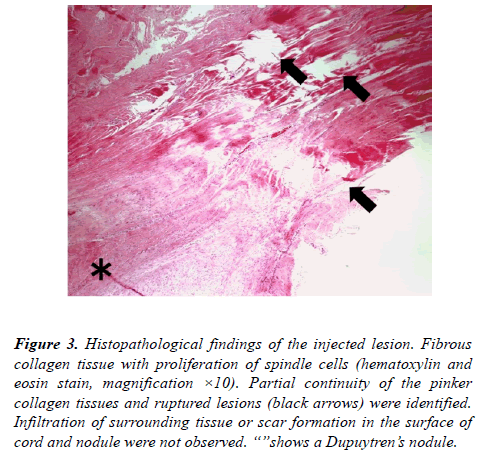 Figure 3. Histopathological findings of the injected lesion. Fibrous collagen tissue with proliferation of spindle cells (hematoxylin and eosin stain, magnification ×10). Partial continuity of the pinker collagen tissues and ruptured lesions (black arrows) were identified. Infiltration of surrounding tissue or scar formation in the surface of cord and nodule were not observed. “”shows a Dupuytren’s nodule.

The patient started active finger motion exercises from the second postoperative day, and suture strings were removed three weeks after fasciectomy. He resumed his daily activities without loss of motion or any residual symptoms (Figure 1E and F). One year after fasciectomy, extension degrees of the right little finger were 20 and -15 for MP and PIP joints, respectively. There was no recurrence of the cord and symptoms.

The outcome of salvage fasciectomy is influenced by numerous factors including the number of CCH injections into the joint, the duration between surgery and injection, and preoperative severity of the contracture. Although the presented case had Meyerding Grade 3 contracture, a minimal number of CCH injections and long interval of three and a half years after initial injection contributed to the patient’s favorable outcome.

In conclusion, we present a case of successful salvage fasciectomy after initial CCH injection for the treatment of Dupuytren’s contracture. We could not find any remarkable scarring around the Dupuytren’s cord and nodule three and a half years after the initial CCH injection. Pathological findings revealed the previously ruptured cord and partial continuity of the collagen tissue. If there is a sufficient duration between initial CCH injection and salvage surgery, fasciectomy can be performed without an adverse effect of the enzyme around the Dupuytren’s cord and nodule. Notably, the patient described in this case resumed his daily activities and did not suffer any complications after salvage fasciectomy, thus demonstrating the safety and efficacy of this procedure.