Introduction: Osteoma is a benign tumour of the temporal bone and is very uncommon. Osteomas are reported very rarely from temporal bone but may occur in external auditory canal commonly as in other parts of body. Case report: A 22 year old female presented to ENT & HNS Department of DRRPGMC Kangra At Tanda with very hard swelling in left post auricular region diagnosed as osteoma. Under local anaesthesia complete excision complete excision up to cortical bone was done through post auricular approach. Further histopathology confirmed the diagnosis. Conclusion: While dealing with bony hard mastoid swellings, osteoma should always be kept in mind although they are rare. To avoid the recurrence of these swellings complete removal should be done by drilling till the normal cortical bone is reached. If while drilling we realize there is involvement of the mastoid air cell system then cortlcal mastoidectomy should be done which was not required in this case as there was not any involvement of mastoid air cells.

By definition osteoma is a benign tumour of mesenchymal osteoplastic nature composed of well differentiated osseous tissue with laminar structure [1]. In the temporal bone osteomas are extremely rare and mostly occur in the external auditory canal, while mastoid osteomas rarest among all of them [2]. Among the benign tumours of the skull temporal bone osteomas in general constitute 0.1% to 1% [3]. Aetiology of osteomas arising from mastoid bone as per literature included:

We present a case of 22 years female with mastoid osteoma presenting as single painless swelling in postauricular region.

A 22 year old female presented to us at Dr. Rajendra Prasad Govt. Medical College Kangra at Tanda, with a post auricular hard swelling in left mastoid region. There was no h/o associated:

• Diziness or cranial nerve deficit and no h/o scalp infection.

The presenting only complaint of the patient was cosmetic deformity for which she sought medical advice. Patient was alright 6 years back when she developed swelling behind left ear which was initially the size of pea nut, then gradually it increased in size of that of almond and was progressively increasing in size.

On examination pre auricular area was normal. In post auricular area there was a bony hard sessile and non-tender swelling of 30 mm × 40 mm dimensions (Figures 1-4) and overlying skin was free. Facial nerve and other cranial nerves were normal and no exostosis was detected in either of external auditory canals. Rest of the ear, nose and throat examination was within normal limits. No other significant abnormality was found in ophthalmological and rest of systemic examination. All routine blood examination and biochemistry was within normal limits and computed tomography (CT) of left 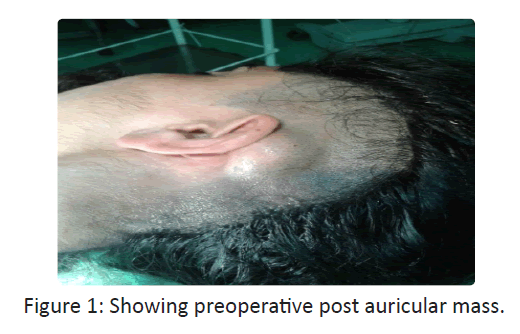 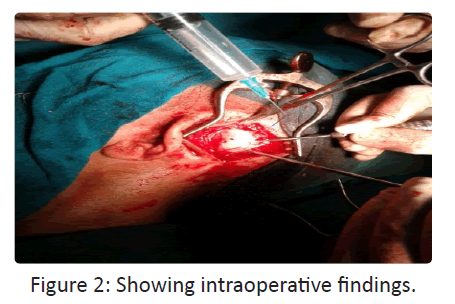 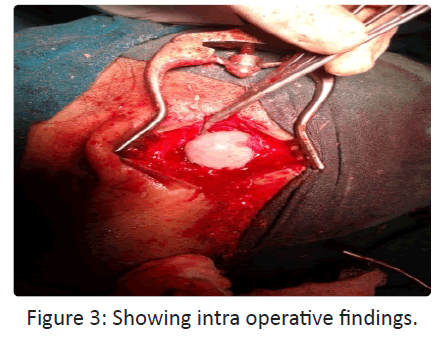 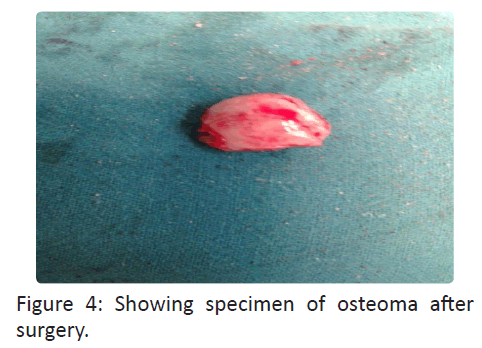 Temporal region revealed a radiodense broad based swelling in left mastoid and squamous temporal bone (Figures 5-7). No other radiological abnormalities were seen in the middle and inner ears. In whole of temporal bone there was no evidence of another density. 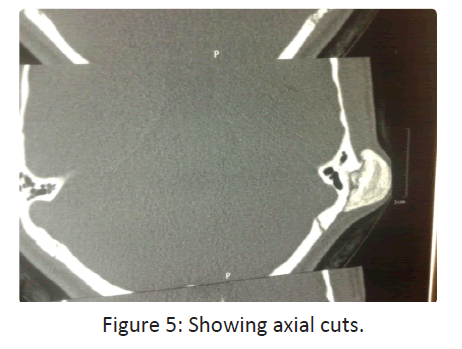 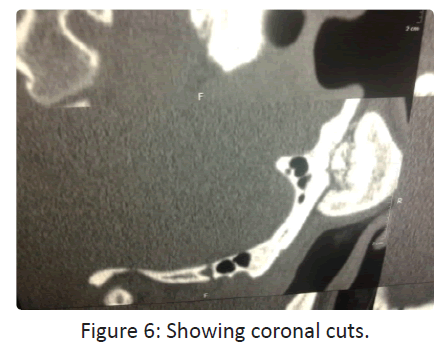 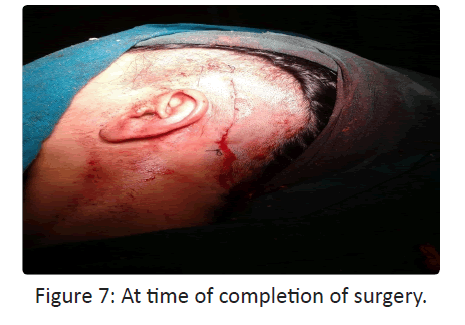 Figure 7: At time of completion of surgery.

A modified William wilde incision was given to provide complete exposure of osteoma. A groove was drilled around the base and further removed in to till cortical bone was visible with depression in it (Figure 3). Since there was no involvement of mastoid air cell system in anterior part of dissection, no cortical mastoidectomy was done and hence no chance of recurrence. The incision was closed in layers with 3-0 vicryl thread without any drain and stitches were removed 7 days after surgery without any complications in postoperative period. Histopathology further confirmed the diagnosis of compact osteoma. The patient was free of symptoms at 3 months follow up and there were no signs of Recurrence and complications.

Bony hard swellings of mastoid bone are benign in nature and are slowly growing and circumscribed in shape. When histopathology of these swellings is done they prove to be osteomas [5].

D-ottavi et al. reported 2 cases of their own and reviewed 100 cases of mastoid osteomas [6]. Sequence wise amongst parts of temporal bone, external auditory canal is the most common location for osteomas followed by mastoid and temporal squoma [7]. Exact etiology of osteoma is uncommon but there is some evidence to suggest a congenital origin [8]. The most commonly accepted theory is whenever there is recurrent local irritation and trauma there is embryogenesis and metaplasia in the mastoid part of the temporal bone and leads to osteoma formation. Usually osteomas occur singly, but when they are multiple, Gardner’s syndrome must be ruled out. Osteomas may occur alone or as a part of the syndrome. Gardner’s syndrome which is characterized by: multiple intestinal polyps, epidermoid inclusion cysts, fibroma of the skin and mesentry and osteoma must be ruled out in every single case. In Gardner’s syndrome osteoma usually affect membranous bones as mandible and maxilla [9]. Osteomas of skull may be compact, spongy and mixed. In most of the cases osteomas are asymptomatic but they can be present with deformity, swelling, pain, deafness and discharge [10]. The differential diagnosis includes - Osteosarcoma and Osteoblastic metastasis. The investigation of choice is CT scan for mastoid and all other osteomas. The imaging appearance reflects the underlying pathology, with Ivory osteomas appearing as very radiodense lesions similar to normal cortex, whereas mature osteomas may demonstrate central marrow. It is as high opacity, well demarcated and dense growth of sclerotic lesions from the mastoid bone [1]. Only for cosmetic reasons or if symptomatic then only mastoid osteomas are resected. Excision of mastoid osteomas is done with drills completely up till cortical bone is reached all around. If in case mastoid air cells are exposed then cortical mastoidectomy is must to prevent recurrence. In this case main reason for excision was marked swelling which was causing deformity. As these lesions are limited to external cortex, finding a cleavage between osteoma and normal bone is not difficult [11]. Prognosis of such tumors is good. Careful follow up of these patients is must because mastoid osteomas may be a part of the Gardner’s syndrome. Ophthalmological examination and colonoscopy in these patients is must to rule out Gardner’s syndrome. Recurrence is rare and malignant transformation has not been reported [12].