To analyze the nature of ossicular erosion and classify the remnant ossicles to be used for ossiculoplasty. Patients between 12 and 60 years of age with a history of ear discharge with moderate conductive deafness (>40 dB HL) were included in the study. The patients were assessed of ossicular erosion by new classification of ossicular status which included remnant ossicles (M=Malleus, I=Incus, S=stapes, + =present, - =absent, p=partially eroded). Out of 42 cases studied, Incus is always eroded partially or completely in equal cases. Suprastructure of stapes is next common to be eroded in nearly 75% of cases. Malleus was undisturbed in 50% of cases. Malleus handle was the least part to get eroded. New classification of ossicular status is needed for in cases undergoing ossiculoplasty for documentation and better representation of disease process.

Evolution of hearing mechanism from invertebrates to mammals

Invertebrates do not have ears. But they can detect sound using other kinds of sense organs. Insects have tympanal organs situated on the side of head [1] or along the body or legs to perceive distant sounds [2]. Fish perceive sounds with the help of lateral lines that are present in the side of their bodies [3]. Amphibians have no external ears. But the middle ear is developed. It has an ear drum on the side of head like a disc of cartilage. To the inside of this ear drum a thin rod of cartilage and bone (ossicle) known as columella passes in an air filled cavity (middle ear) upto the inner ear. The columella terminates as an expansion like the stapes which is in relation to oval window. In reptiles the tympanic membrane is bulging out alongside the jaw bones quadrate and articular. The membrane is again connected to inner ear by a single bone, stapes. In birds the middle ear consists of two bones an osseous inner part, columella and a cartilaginous extra columella that is in contact with tympanic membrane.

Over the course of transition from reptiles to mammals [4], one lower and one upper jaw bone (the articular and quadrate) become of no use in the jaw and migrated to the middle ear, connecting to the stapes and forming a chain of three bones (collectively called the ossicles) which amplify sounds and allow more accurate hearing. In mammals, these three bones are known as malleus, incus, and stapes (hammer, anvil, and stirrup respectively). While the stapes is present in many types of tetrapods, the addition of the incus and malleus in the middle ear is a unique feature of mammals, distinguishing them from other vertebrates.

There are 3 ossicles in the middle ear which conducts sound from external ear to inner ear. They are Malleus, Incus and Stapes. Malleus (Figure 1) is the lateral and largest of the ossicles. It is about 8 to 9 mm long. It has following parts; Head is rounded and lies in the attic, articulates posteriorly with the body of incus and gives attachment to superior and lateral malleolar ligaments. Neck lies against the pars flaccida and related medially to Chorda tympani. Anterior process is connected to the petro tympanic fissure by the anterior malleolar ligament. Lateral process projects from upper end of the handle and provides attachment to the malleolar folds. Handle extends downwards, backwards and medially and it is attached to upper half of the tympanic membrane. Incus (Figure 2) parts of incus are Body which is large with its articular surface directing forwards, short process which is directed backwards and is fixed to fossa incudis just below the aditus and Long process which is directed downwards into the cavity just behind and parallel with the handle of malleus. Its tip bears a lentiform process which is directed medially to get articulated with stapes head. Stapes (Figure 3) is the medial most and smallest of the 3 ossicles. It has following parts; Head has a small concave facet which articulates with lentiform nodule. Neck is the narrowest part giving insertion to tendon of stapedius. Crura are two in number, the anterior and posterior one. The anterior crura is shorter and less curved. The limb diverges from neck and gets attached to the foot plate. Foot plate is oval in shape and fits into the oval window 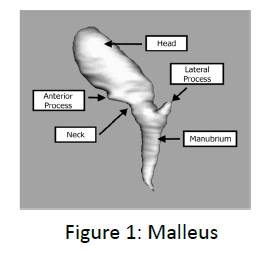 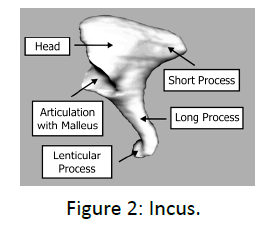 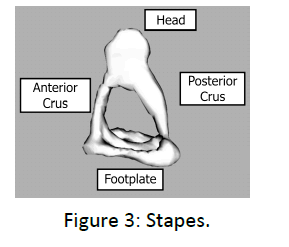 The human middle ear transforms the low impedance sound energy in the external auditory canal through the tympanic membrane and ossicles to a high impedance of perilymph inside oval window [5].

3. Hydraulic lever-by the difference between tympanic membrane and the stapes foot plate.

The Malleus incus assembly moves together thereby causing a gain of 1.3:1 because of difference in length of manubrium of Malleus and long process of incus. Both levers, Ossicular and catenary gives a ratio of 1:2.3.

The sound conducted from a large tympanic membrane to small foot plate gives a increase force at the level of foot plate. The total ratio is 20.8:1. Ossicular, catenary and hydraulic lever gives a sound gain of 34 decibels.

It is the real gain in pressure of sound while sound travels from tympanic membrane through the ossicles. It depends on frequency and not 34decibels always. It is 20 decibels in 250 to 500hz and 25 decibels in 1000hz then decreases to 6decibels for every octave thereafter. This is because in higher frequencies the tympanic membrane vibrates at different portions. Also the Ossicular chain slips at higher frequencies.

The sound conducted hits oval and round window and normally there is nothing much appreciated.

In case of operated ears the difference may be significant enough to cause hearing loss.

This indicates the factors causing impairement of movement of foot plate of stapes into oval window thereby increasing the impedance and hearing loss.

Ossicles may be either fixed or in discontinuity

The Causes of Ossicular Fixation are:

1. Malleus head ankylosis. The reason for ankylosis is idiopathic [6].

The Causes for Ossicular Discontinuity are:

The most common ossicles eroded in order of frequency are:

4. Erosion of head of Malleus

5. Handle of Malleus is the least common part to erode following cholesteatoma.

Clinical examination includes otoscopic examination or under microscope looking for any congenital abnormality and examining external auditory canal and Status of the tympanic membrane and middle ear if seen. CT scan of temporal bone will give the Extent of middle ear pathology (cholesteatoma), Tympanic cavity, Ossicular chain status, Malleus fixity,

and Inner ear anatomy. Ossicular discontinuity is suspected when the patient has conductive hearing loss more than 50dB in Pure Tone Audiogram. 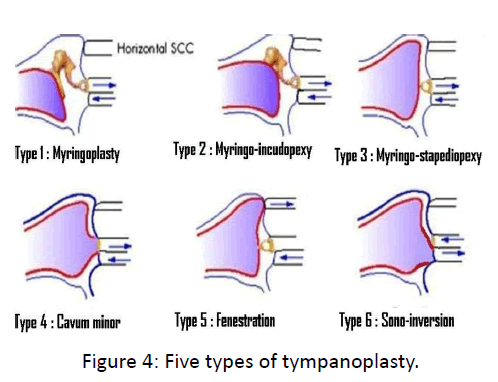 Important note to the new classification

1. Percentage erosion of ossicles is an arbitrary assessment with observer variation. Kindly correlate with anatomy described above.

2. S p can be excluded if needed since partial erosion of suprastructure of stapes (Sp) is rare. Single crura will be inadequate for reconstruction and it mostly needs ossiculoplasty in other forms. Hence we have not included S p in our new classification (Table 5).

Specific factors for new classification of ossicular status which were not present in previous classifications are the following:

1. Remnant ossicles or partial erosion of ossicles is the problem and solution for ossiculoplasty. Interposition of remnant ossicles autologous is safe and cost effective.

2. Remnant ossicle (partial erosion denoted as p in our classification) indicates in detail about extent of disease and whether remnant ossicle was there available for ossiculoplasty for documentation and future study purposes.

3. Previous classifications have not included INCUS. Incus (long process) is the most common ossicle eroded. Remaining body and short process of incus is commonly used for ossiculoplasty.

4. Malleus head is another ideal ossicle for reconstruction.

• To analyze the nature of ossicular erosion and classify the remnant ossicles to be used for ossiculoplasty.

• Patients between 12 and 60 years of age with ossicular pathology undergoing surgery were included in the study.

Incus is always eroded partially (most commonly long process) or completely more or less in equal no. of cases. Suprastructure of stapes is next common to be eroded in nearly 75% of cases. Malleus was undisturbed in 50% of cases. Malleus handle was the least part to get eroded. Preoperative assessment with CT temporal bone could not predict ossicular status accurately and our study is not intended to correlate CT findings with intraoperative findings. 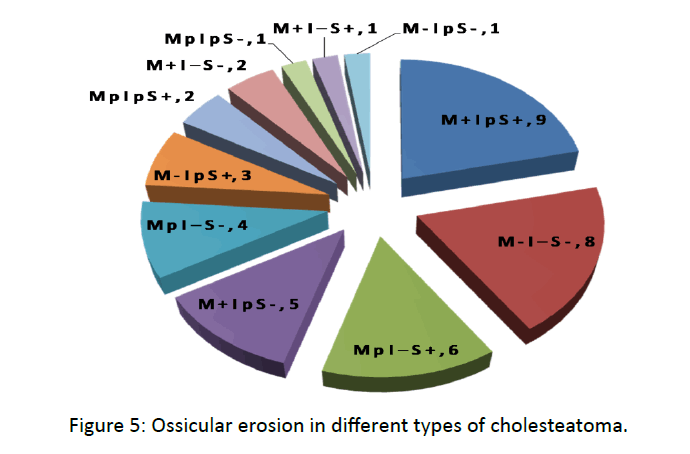 Ossicular chain status in chronic suppurative otitis media in adults [12]. In this study they studied a total of 150 patients of CSOM to assess the intra-operative ossicular status. The ossicular chain was found intact (M+I+S+) in 92 (61.34%) cases. In safe CSOM, 83 cases (92.22%) had an intact chain, 7 cases (7.77%) had ossicular damage. In unsafe CSOM, intact malleus with eroded incus and stapes (M+S−) was seen in 16 (26.67%) cases, followed by M−S− in 15 cases (25.00%). In this study they found the malleus to be the most resistant ossicle to erosion in chronic suppurative otitis media whereas incus was found to be the most susceptible.

Ossicular chain erosion in chronic suppurative otitis media [13] Doha, Qatar. 279 ears that underwent surgery for chronic otitis media were studied and their ossicular status was reported. Ossicular chain was eroded in 66 (23.66%) out of the 279 ears. Erosion was more frequent in cholesteatoma ears (69.3%) than in safe ears (13.9%). The most frequently impaired ossicle was the incus and was found eroded in 62 (22.2%) ears. Malleus was found to be the most resilient ossicle and was eroded only in 13 (4.7%) ears. The stapes was eroded in 31 (11.1%) ears.

Intra operative ossicular status [15] in CSOM PIMS, Karimnagar, Telangana 150 patients of CSOM were selected and were subjected for clinical examination, pure tone audiometry and CT scan of temporal bone. Incus is the most commonly affected oscicle while malleus is the least affected.

Ossicular status in cholesteatoma: a departmental experience in a state medical college of westbengal [16]. 60 cases of cholesteama, Ossicles and their parts getting involved in cholesteatoma cases, in decreasing order are : lenticular process (in total 50 cases)>long process of incus (in total 49 cases) > stapes super-structure(in total 29 cases) > body of incus(in total 26 cases)> head of malleus(in total 23 cases)> handle of malleus(in total 10 cases). Ossicular chain defeact in decreasing order are : m-i-s- > m+i-s- > m-i-s+ > m+i-s+. In their study it was found that incus is the most vulnerable ossicle to get involved in cases of active squamosal variety of chronic otitis media whereas malleus appeared to be the least susceptible one.

Infection and Ossicular necrosis in atticoantral disease [17] Bhaskar Medical College, Yenkapally, Moinabad, during surgery it was observed that 17 patients (34%) of the patients had only incus necrosed, 16 patients (32%) of patients had both incus and malleus involved. All the 3 ossicles were involved in 5 patients (10%) of patients. 11 pateints (22%) had intact ossicular chain. There was only 1 case (2%) where only malleus was involved while no case of only stapes involvement was noted.

Our observation correlates with the studies reviewed above in terms of common ossicles involved (Table 6).