Prostate cancer (PCa) is the second most diagnosed cancer in male in the western world. In about 90% of the cases, it is potentially curable if detected early and treated. But, in the advanced metastatic stage, PCa treatment options are limited and exhibit a poor prognosis. Even though, nanotechnological approaches for cancer cell detection, targeting, and killing have increased; the challenge for developing effective and safe nano-material as nanoparticle still remains. Here we would like to shed light on “Bacteriophage” the naturally available nanoparticle, which have been effectively utilized for its anti- microbial applications for different pathogens and in other fields of biomedicine.

Prostate cancer (PCa) is the second most diagnosed cancer in male in the western world. In about 90% of the cases, it is potentially curable if detected early and treated. But, in the advanced metastatic stage, PCa treatment options are limited and exhibit a poor prognosis. Even though, nanotechnological approaches for cancer cell detection, targeting, and killing have increased; the challenge for developing effective and safe nano-material as nanoparticle still remains. Here we would like to shed light on “Bacteriophage” the naturally available nanoparticle, which have been effectively utilized for its antimicrobial applications for different pathogens and in other fields of biomedicine.

Our work includes the interaction studies between different bacteriophage strains with different PCa cell lines and to know how these particles modulate cancer cell behaviour in vitro (Figure 1). We would like to take this advantage to report our preliminary findings based upon the in vitro interaction studies from PCa cells (PC3) with bacteriophage T4 and M13. Our work was motivated from the previous works from Gorski’s group, which have mainly highlighted mechanisms for phage-integrins binding specificity in cancer cells [1,2]. In our case, we are interested in the internal signalling and pathways associated with the direct interaction of T4 and M13 phages with prostate cancer cells (PC3). Our preliminary results have shown activation of some cell signalling pathways like PKB (AKT) and PI3K induced by natural bacteriophages interaction (Figure 2), very similar with fibronectin pathways [3]. We also have found that bacteriophage T4 and M13 significantly downregulates Hsp90 gene (Figure 3), which is involved in cellular apoptosis, as well others cellular processes, indicating bacteriophages as promising candidate nanoparticle for cancer cell therapies. 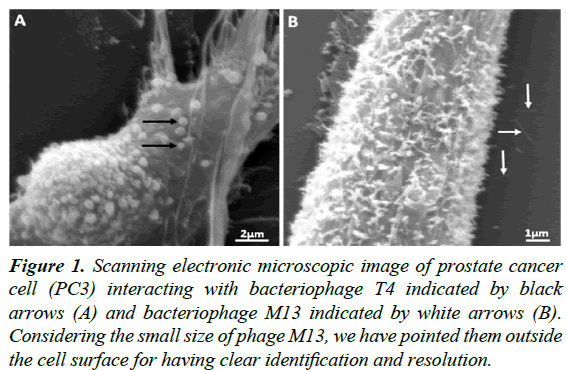 Figure 1: Scanning electronic microscopic image of prostate cancer cell (PC3) interacting with bacteriophage T4 indicated by black arrows (A) and bacteriophage M13 indicated by white arrows (B). Considering the small size of phage M13, we have pointed them outside the cell surface for having clear identification and resolution. 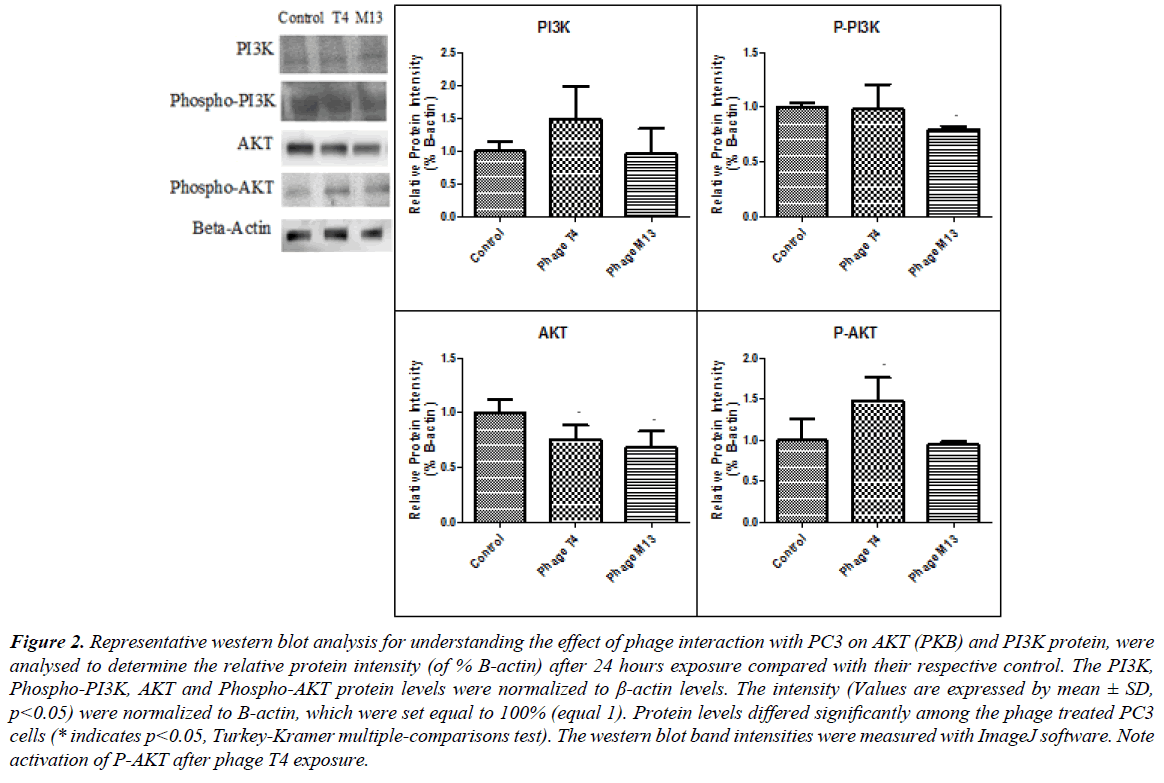 Figure 2: Representative western blot analysis for understanding the effect of phage interaction with PC3 on AKT (PKB) and PI3K protein, were analysed to determine the relative protein intensity (of % B-actin) after 24 hours exposure compared with their respective control. The PI3K, Phospho-PI3K, AKT and Phospho-AKT protein levels were normalized to β-actin levels. The intensity (Values are expressed by mean ± SD, p< 0.05) were normalized to B-actin, which were set equal to 100% (equal 1). Protein levels differed significantly among the phage treated PC3 cells (* indicates p< 0.05, Turkey-Kramer multiple-comparisons test). The western blot band intensities were measured with ImageJ software. Note activation of P-AKT after phage T4 exposure. 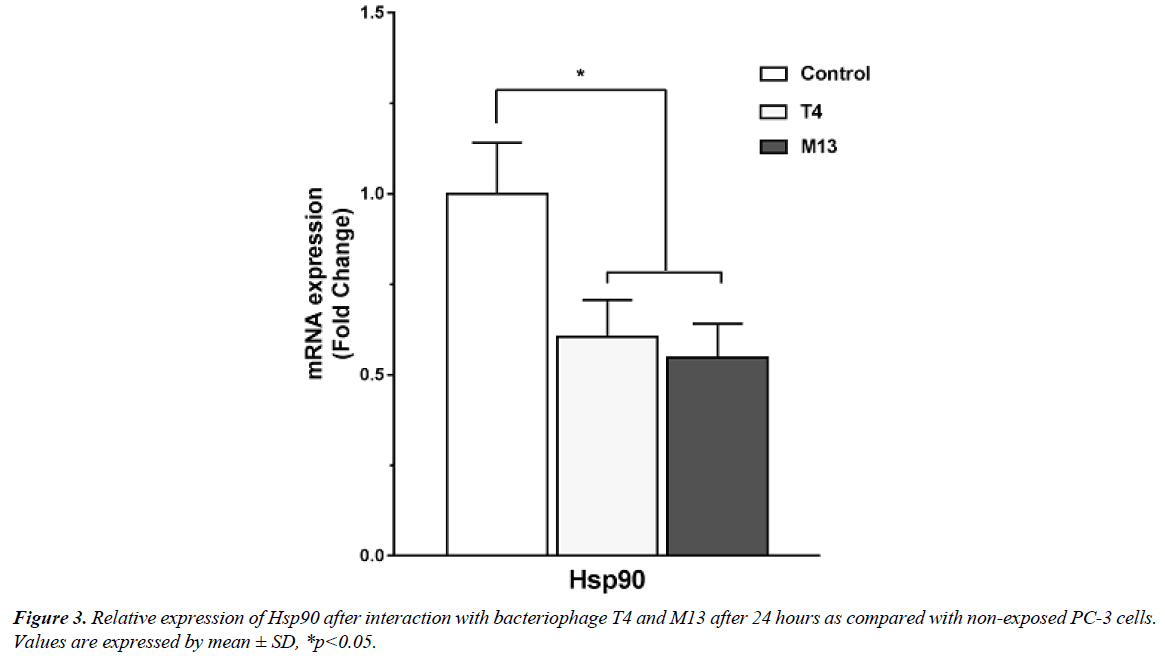 Figure 3: Relative expression of Hsp90 after interaction with bacteriophage T4 and M13 after 24 hours as compared with non-exposed PC-3 cells. Values are expressed by mean ± SD, *p<0.05.

As Hsp90 is already reported as survivin suppressors [4], phages could be an effective tool in modulating survivin naturally or potentialized through phage display or other modifications. The survivin protein which has been reported as an anti-apoptotic protein represents smallest and last member of the Inhibitor of apoptosis (IAP) genes [5,6]. It is an important cell cycle protein, which promotes mitosis and DNA repair mechanism; whereas, inhibits apoptosis and autophagy along with its important function in mitochondrial repositioning and tumour invasion [7,8]. Use of a natural tools or vehicle as a carrier of proteins, peptides, oligonucleotides, and nucleic acids for anti-survivin therapy can prove far better than chemicals and synthetic drugs [4]. Bacteriophage and phage derived products can be an effective tool for developing such anti-survivin therapy, by suppressing receptor Hsp90 for example, which can be another option to cancer treatment therapies in the near future.

Moreover, bacteriophage interaction with cancer cells can induce others cell signalling pathways towards epigenetic changes. It has been shown that histone methyltransferase G9a is highly expressed in the metastatic prostate cancer cells and directly regulates the expression of several Runx2 target genes, which function as critical regulators for the tumour growth, invasion and/or metastasis [9]. In addition, the recent study also indicates that histone lysine demethylases also play an essential role in the initiation and development of prostate cancers [10]. For instance, over expression of PHD finger protein 8 (PHF8) facilitates cell proliferation, migration, and invasion in prostate cancers [11]. Interestingly, as some of the histone modifiers are able to directly interact with the DNA methyltransferases (DNMTs) and play a role in the maintenance of DNA methylation at certain loci [12], DNMTs might also indirectly involved in the initiation and deterioration of prostate cancers. Extracellular vesicles have been reported to carry out epigenetic modifications in cancer microenvironment through DNA methylation/demethylation, histone modifications or noncoding RNA regulations (microRNAs and long non-coding RNAs) [13]. Similarly, bacteriophages/modified phages or their hybrids can be utilized for effectively down-regulating oncogenes expression.

Bacteriophage can also work as liposomal drug/peptide/ protein delivery for targeting of cancer cells [14]. Similarly, bacteriophages complexed with synthetic nanoparticles had also got attention because of its hybrid nature, such as M13 with iron hydroxide [15]. More recently, f8 type of bacteriophages was introduced which are self-navigating phages, providing multi-targeting ability which will certainly paved way for self-navigating nanomedicines for overtaking the homing and targeting barriers. In this sense, the combination of bacteriophage modified with RNAs, DNAs, peptides, proteins and synthetic molecules seems to be more promising approach against cancer cells as compared with other nanoparticles or chemically synthesized drugs alone [16].

Treatment option for the individual patient, based on the molecular profile of their disease, is the main challenge of modern personalized medicine, including PCa. Since bacteriophage is a naturally available nanoparticle and has no adverse immune response, our purpose for conducting this study was to demonstrate that phages are capable of influencing cancer cell signalling pathways and can be used to develop modified phagebased therapeutic products for cancer treatment [17].