This paper reports a case of extensive nasal injury managed nicely with good cosmetic results. The nose is easily exposed to trauma because it is the most prominent and anterior feature of the face. Its central position and anterior projection on the face predisposes the nose to traumatic injury Nasal injuries are commonly assessed in the accident and emergency (A&E) departments. An injured nose can bleed from lacerations (cuts) of the skin or inside the nose. These cuts may need to be repaired and evaluated immediately. Excessive activity may restart bleeding. Blood can also be collected inside the nasal septum tissue spaces (hematoma). A septal hematoma can cause trouble by injuring or thickening the septal structures. Injured septal structures may result in the loss of structural support of the nose. Septal thickening may obstruct the nose. One should look into the nose to determine if there is a hematoma. Confirming that no septal haematoma is present is crucial to avoid further compressive damage to native tissue and dangerous infectious complications. Long term follow-up allows the surgeon to assess for both early and late sequelae of injuries to the nose.

A 5 years old Omani male child reported in our ENT department with history of fall from 1 meter height resulting in injury of external nose. There was no history of loss of consciousness or vomiting, On examination- An extensive Y shape wound was present on the external nose with exposed nasal bones extending from both the medial canthus to the middle of the nasal bridge, There was no septal haematoma, No post nasal bleeding, the child was evaluated pre-operatively, vitals were stable no bleeding was noted from the nasal /forehead wound. Child was immediately evaluated for head injury and other wounds. Child was also evaluated by anesthetists, as it was planned to take the child for suturing of the nasal wound in O.T under G.A. considering the extensive nature of the wound and age of child X-ray nasal bones and X-ray skull A.P and lateral view and C.B.C were ordered which were within normal limits and acceptable Child was taken for suturing of the nasal wound in OT(Figure1-3).

Under GA with Endo tracheal intubation exploration of the nasal wound was done. Awound was noted over the dorsum of the nose avulsing the skin of the nasal dorsum from the distal two third of the dorsum right up to the glabellar region forming a flap with a semilunar distal end and clean margins extending over the sides of nasal dorsum slightly medial to the innner canthus on both sides and with a wide base over glabellar region. The distal semilunar edge of the flap showed mild duskiness but the flap was generally well vascular, the wound appeared to be fairly clean .Irrigation of the wound was carried out with diluted hydrogen per oxide and normal saline. One small bleeder under the flap was slightly cauterized to achieve haemostasis. The bony nasal dorsum was seen exposed but no evidence of fracture of nasal bone was noted. The wound was closed by suturing in two layers – one subcutaneous layer with 4/0 vicryl to approximate the flap to the bed of the wound and the 6/0 nylon sutures for the skin A small dressing was given. The face and head were examined for any other injuries – nil found .Nasal cavities were normal on anteriorrhinoscopy neither any injury to sinuses were apparent. The child was extubatedsmoothly Child was evaluated post operatively on regular basis. He was discharged the other day and then followed up in the ENT clinic for suture removal. Wound remained healthy and the result is oblivious in the post-operative picture (Figures 4-6). 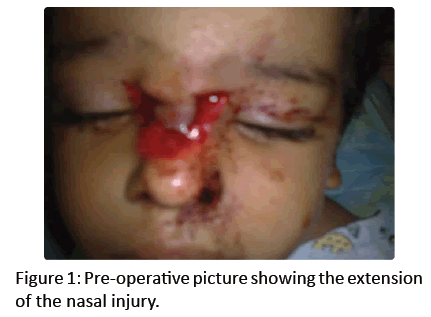 Figure 1:Pre-operative picture showing the extension of the nasal injury. 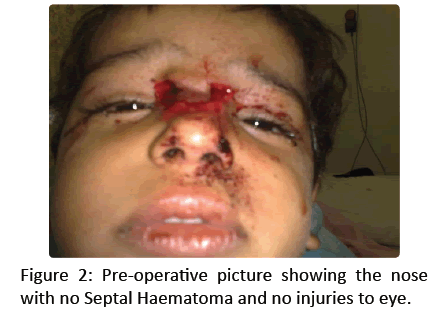 Figure 2:Pre-operative picture showing the nose with no Septal Haematoma and no injuries to eye. 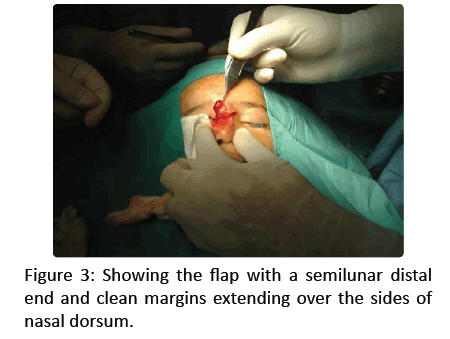 Figure 3:Showing the flap with a semilunar distal end and clean margins extending over the sides of nasal dorsum. 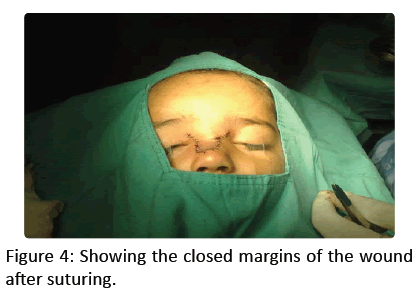 Figure 4:Showing the closed margins of the wound after suturing. 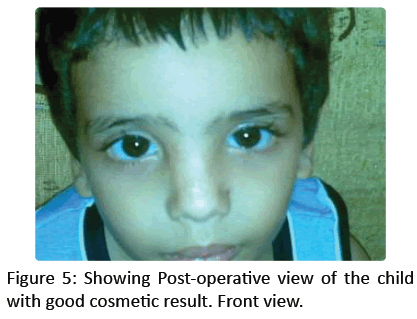 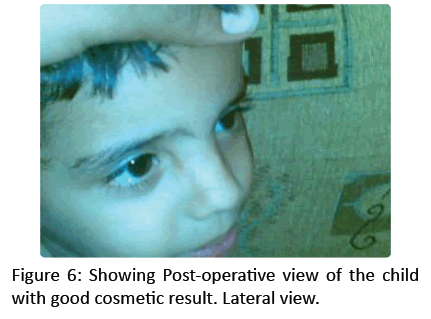 The nose is the prominent part of face and therefore nasal injuries are quite common .The nose’s prominence, anterior projection and central position on the face make it susceptible to trauma [1]. The nasal bone is the most commonly fractured bone in the face and the third most commonly fractured bone of the skeleton over all [2]. The commonest causes of nasal bone fracture are road traffic accidents sports injuries assault and accidental falls [3]. The initial assessment and evaluation of nasal injuries is very important factor as undiagnosed or untreated nasal injuries account for a high percentage of septoplasty or rhinoplasty procedures performed months to years after the initial trauma [4]. Primary intention occurs when the wound is closed by direct approximation of the wound margins or by placement of a graft or flap. Direct approximation of the edges of a wound provides the optimal treatment on the condition that the wound is clean and protected from any super added infection. About 230 million major surgical procedures are performed worldwide each year [5]. Wound closure creates the tensile strength that holds the wound edges together and it provides an effective seal until healing takes over The closure can be done without undue tension Wounds that are less than 6 hours old are considered in the “golden period” and are less likely to develop infection provided that there is adequate perfusion of the tissues and no infection Postoperative infection is a major source of morbidity, mortality and hospital costs. Epithelialization of surgical incisions occurs within 24 hours of closure. A sterile dressing under aseptic measures should be kept in place during this susceptible period to prevent bacterial contamination Basic surgical principles to be applied are closure without tension, elimination of dead space, aseptic technique, and (when closing skin) aversion of the skin margins. A dog-ear occurs when unequal bites are taken on opposing sides of a wound or incision, causing the tissue to bunch up as the end of the wound is approached. This can be prevented by carefully aligning the wound at the time of deep tissue closure (elimination of dead space) with interrupted absorbable sutures and by taking equal bites of tissue on both sides of the wound. The skin can be closed by continuous subcuticular sutures, interrupted sutures or skin staples. Data are also now available that compare adhesive and more established techniques [6], the literature is sparse, however, on the role of skin closure technique on the rates of infection. Suture removal should also be considered at appropriate time Suture scars occur when stitches are left in place too long, allowing epithelialization of the suture tracts. This complication can be minimized by timely suture removal. Facial sutures should be removed at days 3 to 5. Whereas elsewhere 7 to 10 days are appropriate. A (Vicryl) Synthetic braided, lubricated with polyglactin is excellent for subcuticullar and subcutaneous sutures whereas nylon a synthetic polymide monofilament is good for skin .the preferred method of skin closure however varies with different options at disposal of the surgeon but for sure the effective wound healing minimizes infection chances and produces a satisfactory cosmetic results as is obivious in our case.

In conclusion any injury particularly nasal injury in the initial stage needs proper evaluation with particular attention to exclude any septal haematoma, if suturing is needed for cut wounds it should be done with appropriate suturing material and should be in a meticulous manner so as to have good cosmetic results.