Extensive deep neck space abscesses including combined retropharyngeal and parapharyngeal abscess (RPA and PPA) with impending airway compromise in children is a rare and life threatening situation. This needs emergency care not only to drain abscess but also to secure the airway. The diagnosis is based on clinical and radiological pictures. Prompt diagnosis and early management is vital. Management involves securing the airway and adequate treatment for the abscess. The role of surgical drainage in deep neck abscesses is questionable. Studies mention both conservative as well as surgical options with both providing almost similar resolution of features. We describe large etropharyngeal abscess with extension into B/L parapharyngeal space and anterior mediastinum, which was managed with minimal invasive approach. Extensive search of peer reviewed English language literature did not reveal such a case of massive abscess drained by minimally invasive technique.

Deep neck space infections (DNSIs) are usually present in an emergency care set up with potentially life threatening symptoms. Prompt treatment including medical management and decision regarding drainage including choice of approach is fundamental.

Surgical drainage is usually done in pediatric age group for RPA, with reports of 70% requiring trans oral drainage, 20% requiring external cervical approach and 10% being drained by combined approach. [1] Furthermore, complete resolution without drainage is also reported. [2] For PPA IV antibiotic is the baseline treatment. However, failure to respond to medical management or deterioration prompts the surgical drainage via horizontal incision over neck. [3]

On examination, the child was active, alert and febrile (101°F) maintaining oxygen saturation on room air (99%). There was no respiratory difficulty. No dyspnea/stridor. Examination of oral cavity and oropharynx revealed bulging in the posterior pharyngeal wall on right side. There was tenderness in neck and restricted neck movements. B/L level II, III level lymph nodes were palpable. No swelling seen externally over neck. On chest examination, there were no adventitious sounds. 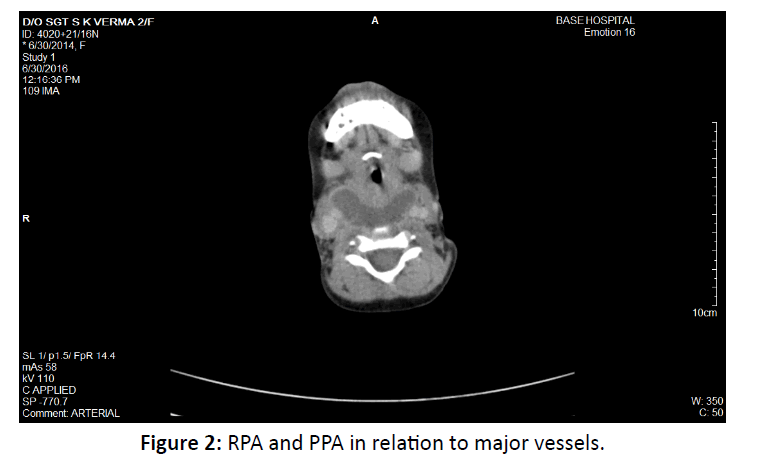 Figure 2: RPA and PPA in relation to major vessels. 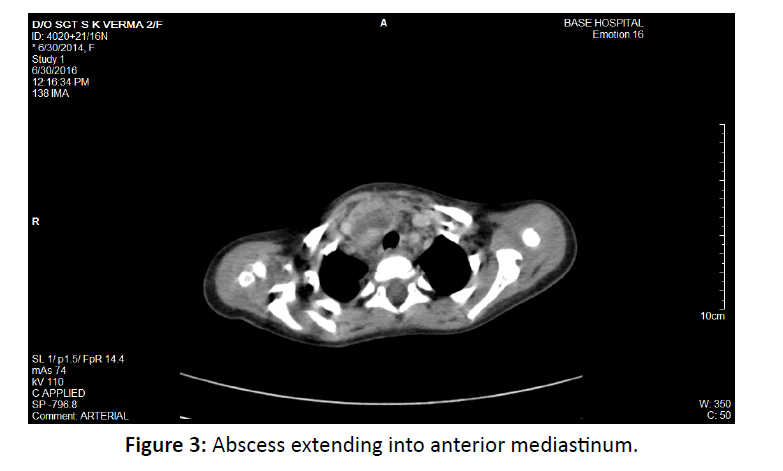 The patient was diagnosed as a case of large retropharyngeal abscess with extension into B/L parapharyngeal spaces and anterior mediastinum. She was started on IV fluids, intravenous broadspectrum antibiotics, analgesic and antipyretic. Next day under general anesthesia, surgical drainage of the abscess was done trans orally. A stab incision taken over most fluctuant site of posterior pharyngeal wall bulging and extended in cruciate pattern. Continuous suction was done in head low position and about 20 ml of pus was drained out. Feeding tube was put in place for feeding and facilitating the healing of the wound. Intravenous antibiotics were continued for 7 days, during which patient improved clinically, with no spikes of fever after 4th post op day. She was started on oral feeds from 5th post-operative day. Repeat CECT done on 07th postoperative day showed near total resolution of the retropharyngeal abscess with residual air pockets (Figure 4). 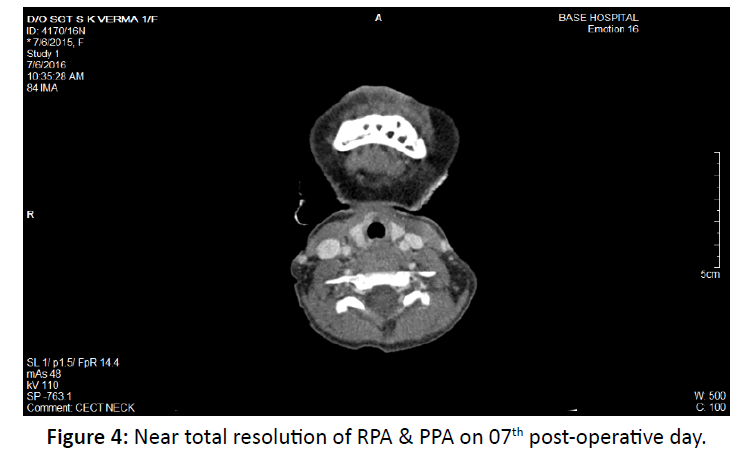 We describe an unusual case of massive deep neck space abscess in 1 and ½ year old child which was managed with minimal invasive approach with complete recovery.

Generally, the clinical course of a retropharyngeal abscess includes fever, swelling, drooling, and swallowing difficulties, and is typically associated with prior upper respiratory tract infection and a history of trauma caused by foreign bodies [4]. As the abscess grows, it usually causes significant respiratory distress, particularly in young children [5]. Our patient, however, did not experience any respiratory distress. This was most probably because of generalized extension of abscess into surrounding deep neck spaces like in B/L parapharyngeal spaces, upto anterior mediastinum and displacing carotid sheath laterally.

Parapharyngeal abscess presents as fever, unilateral throat pain, dysphagia, odynophagia, drooling of saliva, trismus. Clinically there is swelling in the pharynx more inferiorly and behind the tonsil with less edema of palate. In addition, there is the tender, firm and fluctuant swelling of the abscess to be felt in the neck rather than just lymphadenopathy. However, in our case there was no external swelling over neck seen.

Plain X rays and CT/MRI can be used to delineate abscess in greater detail. In our case we use CECT neck due to its accuracy in differentiating RPA from cellulitis is 74%. [6,7] CECT gives accurate details of spread of deep neck space infection in our case.

DNSIs can be managed with either antibiotic or surgical drainage or combination of both. An evidence based antibiotic regime is proposed. In children lacking indications for surgical intervention, a trial 48 hour of intravenous antibiotics (IV Abx) should be commenced. Indications for surgical intervention include signs of airway compromise, presence of complications, no clinical improvement after 48 hour of IV Abx, abscess >2.2 cm on CT imaging, age <4 years.8 Surgical drainage is the norm in pediatric age groups for RPA due to significant incidence of airway compromise at presentation (29%). As per study 70% require trans oral drainage. 20% via external cervical approach and 10% require combined approach to provide adequate treatment [1]. For PPA IV antibiotic is the baseline treatment. Failure to respond to medical management or deterioration prompts the surgical drainage via horizontal incision two finger breadth inferior to the lower border of mandible going from lateral aspect of hyoid tip to anterior aspect of sternocleidomastoid. [3] However, smaller abscess can be aspirated trans orally. [9] Vázquez Lopez et al. [10] also suggest that the decision of whether to apply medical or surgical management depends on several factors, including the general condition of the child, the size of the abscess, potential complications arising frjkuhjkom the abscess, and surgical accessibility. A number of other authors have suggested using surgery only when patients do not respond to medical treatment (e.g. intravenous antibiotics). [11,12]

In our case, there was a massive abscess in deep neck spaces of size approximately 3.2 × 4.5 × 14 cm (AP × ML × CC) with bulge on posterior pharyngeal wall but no swelling seen externally over neck. Patient was <4 years of age and size of abscess was much more than 2.2 cm. We had three options. IV antibiotics alone, transoral approach or combined (transoral and cervical) approach. We selected minimal invasive approach for surgical drainage of abscess via cruciate incision transorally, because the PPS and RPS being communicating spaces, drainage can be achieved through sane incision. An antigravity suction was done to achieve clearance from anterior mediastinum. To secure the airway rather than doing tracheostomy we went for ET intubation and patient was kept on ventilator for 48 hours postsurgery. Patient improved over next 3-4 days with no spikes of fever after 04th post op day. Oral feeds were started from 5th post op day. Check CECT done on 07th postop day suggestive of subtotal resolution of retropharyngeal abscess. (Figure 4) Patient was observed for next 02 days and discharged to home and was continued on medical treatment for next two weeks. The patient was reviewed after one month and clinical features and ultrasound were suggestive of complete resolution.

DNSIs with such massive extent into retropharyngeal space, B/L Para pharyngeal space and extending up to mediastinum is an unusual clinical picture which needs prompt management including immediate airway management, antibiotics and/ or draining the abscess. CECT is useful not only for diagnostic purposes, but also for determining the extent of the abscess.

The decision of whether to use surgical or medical management depends on a variety of factors, including the patient's age, general condition, the size of the abscess, and potential complications of DNSIs. We recommend this technique in massive abscesses involving both PPS and RPS for good results with minimal intervention.