We report a rare case of two epidermoid cysts in Neck undergoing malignant changes. Clinicopathologic features of this rare entity are discussed along with review of relevant literature.

A 28 years old male, without any significant previous medical history, presented with a swelling in left sub-mandibular region and upper part of left side of neck. [3] The duration of the lesion was 7 months with no previous history of any trauma or surgery. Examination revealed a firm, mobile mass in left sub-mandibular region which measured 3.5 cm in diameter and other swelling in upper part of neck on left side measuring 1.5 cm in diameter (Figure 1). 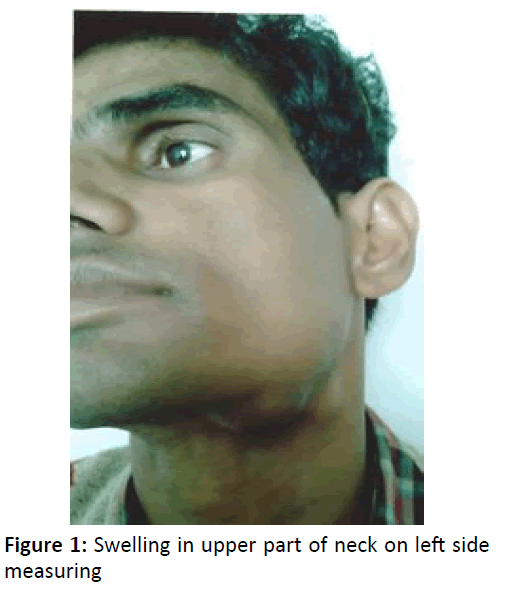 Figure 1: Swelling in upper part of neck on left side measuring

The overlying skin appeared normal. The mass was not pulsatile and it was not adherent to deeper structures. This was diagnosed as epidermoid cyst based on clinical examination and Fine needle Aspiration Cytology (F.N.A.C.) report. C.T. Scan Neck showed, two Hypodense well marginated lesions having cystic densities and post contrast peripheral enhancement on left side of neck, largest lesion in sub mandibular region at the level of sub mandibular gland, measured 3.3 × 2.8 × 2.7 cm with a clear boundary and regular margin positioned under the platysma. The other cyst was near upper part of sternocleidomastoid muscle and abutting external carotid artery measured 2.5 × 2 cm (Figure 2A and 2B). 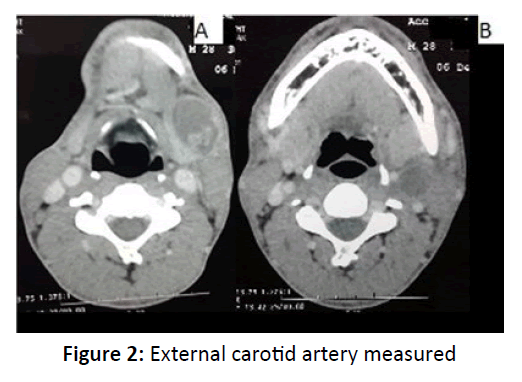 The cysts were planned for excision under general anaesthesia. All preoperative Haematological investigations were normal. A skin incision 2 cm below and parallel to the lower border of mandible was made and sub-platysmal flap was raised thereby preserving marginal mandibular nerve. There was no adhesion to the sub mandibular gland and carotid sheath. The mass was not fixed to deeper structures. The masses were completely excised. Macroscopic examination showed two cysts which measured 6.5 cm x 3.0 cm and 5.0 cm x 2.0 cm (Figure 3A and 3B). 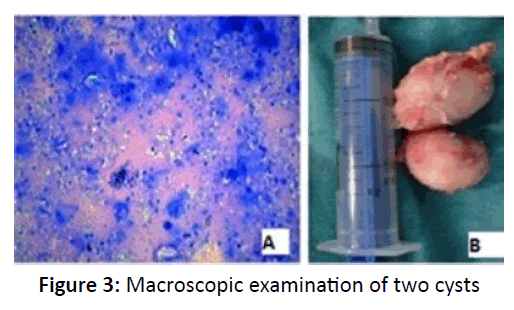 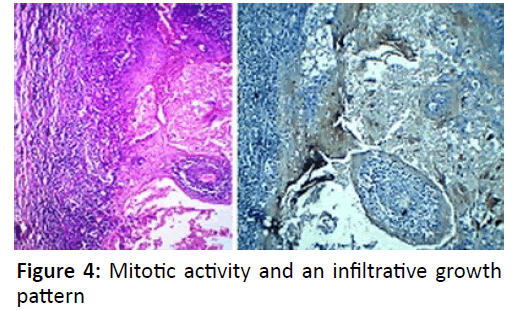 Based on these findings, the diagnosis of squamous cell carcinoma arising in an epidermoid cyst was made. Immunohistochemical analysis showed positivity for Cytokeratin.

An epidermal inclusion cyst is a widespread benign intradermal lesion, and may occur anywhere in the body. The Dermoid cyst is used to describe three varieties of histologically related cysts – Dermoid, Epidermoid and Teratoid cyst. Dermoid cysts may be congenital or acquired. The mechanism of development for congenital cysts involves embryonal aberration of residual ectodermal tissue, whereas acquired cysts are due to epithelial tissue aberration in the dermis due to surgery, trauma or inflammation. [3]

The sub mandibular region dermoids require to be differentiated from submandibular tumours, lymphoma, ranula, metastatic lymphnode, branchial cyst, Haemangioma. CT, MRI and FNAC are required to clinche the diagnosis. However for diagnosis mere imaging and FNAC are not sufficient and excision is required for confirmation. A carcinoma arising in a epidermoid cyst is uncommon. There are few case reports of carcinoma arising in epidermoid cysts. [1,2] Reported rates of malignant transformation of epidermal cyst into cutaneous squamous cell carcinoma range from 0.011 to 0.045%. [4,5]

Most cases have been reported on the head and neck, while the other lesions were on the trunk or limb. [5,6] The size of the lesions ranged from 1.5 to 10 cm (mean, 5cm) and the duration of lesions ranged from 2 to 132 months (mean, 33.5 months). [4,5] The nature of the stimulus for malignant transformation in an epidermal cyst is uncertain. [7] It has been suggested that chronic irritation of the lesion could be a triggering factor [8]. Also there is growing evidence that human papillomatous (HPV) infection may play a role in the development of nonmelanoma skin cancer. [7,9]

The clinical course, prognosis, approach, and optimal management of this disease entity are not well-established, due to rarity of these lesions. Primary treatment for a neoplastic cystic lesion is wide excision with adequate margin of safety. [7] It is proposed that minimal margins of excision should be 4 mm for all lesions, but for high risk tumors, at least 6mm margin is recommended. [7]

Epidermoid Cyst is a benign intradermal lesion, and may occur anywhere in the body and rarely they may turn malignant. A rare case of malignant transformation in an Epidermoid cyst has been discussed with review of literature.