Objective: To evaluate the prevalence of associated hepatic diseases, previously known or not, in patients with established HF diagnosis, followed in a specialized outpatient clinic.

Methods and results: It was an observational study. Patients underwent clinical evaluation, functional class determination, cardiopulmonary, abdominal and lower limbs examination thus laboratory. Transthoracic echocardiography was performed in all patients. The patients were also submitted to hepatic elastography (HE) and, when altered, submitted to abdominal ultrasonography evaluation, to exclude or confirm the presence of liver diseases. Sixty-eight patients (71.6%) had hepatitis A. Two patients (2.1%) had positive serology for the hepatitis C virus and ten (10.5%) for hepatitis B virus and sixteen (16.8%) were protected by hepatitis B vaccine. All patients with liver stiffness (LS)>7.0 kpA, who were twenty-eight (29%), underwent abdominal ultrasonography. The median LS for the entire population was 6.3 (interquartile range 2.5-41.2) kPa. LS correlated with NT-proBNP (r=0.35, p<0.002), total bilirubin (r=0.44, p<0.0001), direct bilirubin (r=0.49, p<0, 0001), alkaline phosphatase (r=0.38, p<0.0001), and GGT (r=0.49, p<0.0001).

Conclusion: We found a low frequency of hepatic comorbidities in patients with chronic HF. In addition, we found a large number of patients with altered LS evaluated by HE that was not associated with liver diseases, suggesting that these results are due to hepatic congestion.

Heart Failure (HF) is a prevalent disease, with a 5-year survival rate of only 35%, being more frequent in the elderly (17.4% in those aged 85 years or older) [1-5]. It is one of the main causes of hospitalizations and deaths in Brazil, consuming 3% of the total public resources allocated to SUS.

HF may, secondarily, affect the function of various organs and systems, notably pulmonary, renal, hepatic and gastrointestinal systems. The hepatic manifestations caused by decompensated HF are related to congestion, which leads to the increase of canalicular enzymes (alkaline phosphatase and gamma-glutamyl- transpeptidase) and bilirubins, and/or ischemia, with elevated transaminases, in addition to neuroendocrine factors [6-11]. Hepatic impairment due to HF ranges from mild alterations in liver function tests to "cardiac cirrhosis" [12,13]. Abnorrmalities in liver function are commonly attributed to HF, but it is possible that some patients with HF mayhave undiagnosed liver disease.

A total of 95 consecutive patients with reduced Ejection Fraction (EF) and intermediate EF, enrolled in a specialized HF clinic, were included in a public university hospital. Most patients classified as intermediate EF have previously had reduced EF and are, therefore, patients with recovered EF. The inclusion criterion was a diagnosis of symptomatic HF, in any functional class, withEF ≤ 50%. There were no exclusion criteria. Patients were under optimized drug treatment, with prescription of medications and doses recommended in the medical guidelines of HF. The study was approved by the local ethics committee of the institution. All study participantsgave written informed consent.

NT-proBNP was analyzed in whole blood, within 6 hours after collection. The dosage of NT-proBNP was made by the Elecsys® system (Roche, Basel, Switzerland). The detection range of the system is 5 to 35,000 pg/mL. Patients with values above that cut had the actual NT-proBNP value determined by dilution with 2 test kits. Serologies for hepatitis A, B and C. They were made in the Siemens Centaur XP device and with their own chemiluminescent kits. It is possible to interpret whether acute, chronic transmission, immunological window, vaccine or natural transmission.

The HE was performed in the FibroScan® device that evaluates hepatic tissue elasticity through an ultrasound transducer operating at 5 MHz. At least 10 measurements were performed in the 9-11 intercostal spaces in the mid-or posterior axillary lines. The apparatus transmits low frequency vibrations (50 Hz) and the shear waves propagated through the tissues are acquired and have their speeds measured by ultrasound. The more hardened the liver parenchyma, that is, the greater the degree of inflammation, the more rapidly the vibrations propagate, and this velocity is the median of the liver elasticity measured in kiloPascals (kPa), normal values around 5 kPa [14,15]. Currently, there are no HF specific cut-off values to grade congestive hepatopathy. In addition to the standard transducer, there is a pediatric transducer (5 mHz) and an X-L transducer (2.5 mHz) for obese patients. Success rate greater than 60%-70% is required. The equipment also calculates the degree of hepatic steatosis that is evidenced from the Parameter Of Controlled Attenuation (CAP), having a good correlation with the liver biopsy findings, which is classified into mild steatosis (values 100-400) andmoderate to severe steatosis (values>400).

Upper abdominal ultrasonography (US) was performed in patients with altered hepatic elastography (established in E>7.0), to rule out other causes of hepatic functional alterations using the compression technique graded by means of Philips HDI ultrasound device -4000 with low and high frequency transducers.

Categorical variables are presented as absolute and percentile values. Continuous variables are presented as mean and standard deviation, with the exception of non-normal variables, which are presented as median and interquartile range. The Kolmogorov-Smirnov test was usedto evaluate thenormalityof the variables. Most ofthe data used in the results were descriptive data, not requiring statistical tests for comparison of groups. For the correlation of the elastography data with the clinical and laboratory findings, a Pearson correlation test or Spearmann test was performed for variables with no normal distribution. Data were analyzed at a significance level of 5%. No sample calculation was performed because it was a convenience sample, with the majority of descriptive data.

Table 1 shows the baseline characteristics of the patients. As observed, there was a predominance of elderly men, five patients (26%) had ischemic etiology, sixty-five patients were hypertensive (68%), twenty-five diabetics (26%) and most were II NYHA functional class patients. Forty-four patients were using enalapril (mean dose 20 ± 12 mg), thirty-four with losartan (100 ± 15 mg), seventeen sacubitril-valsartan (all 400 mg/day), eighty-six spironolactone (all 25 mg/day), nine patients with ivabradine (all 10 mg/day), eighty-nine carvedilol (44 ± 10 mg), six bisoprolol (10 ± 0 mg/day), nine digoxin (0.125 ± 0) and fifty in the use of furosemide (40 ± 58mg).

As shown in Figure 1, sixty-eight patients (71.6%) had hepatitis A. Two patients (2.1%) had positive serology for the hepatitis C virus and ten (10.5%) for hepatitis B virus and sixteen (16.8%) were protected by hepatitis B vaccine. Only two patients with chronic hepatitis B had a previously known diagnosis. Of the 10 patients with B virus, only two had anti-HBc and anti-HBe positive, without anti-HBs positivity for cure criteria. 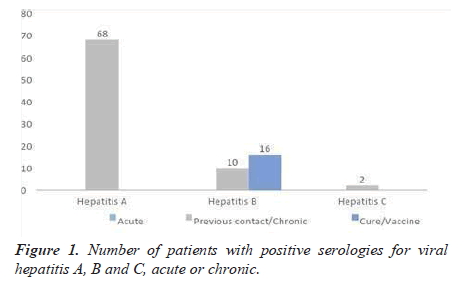 Figure 1: Number of patients with positive serologies for viral hepatitis A, B and C, acute or chronic.

All patients with LS>7.0 kpA, who were twenty-eight (29%), underwent abdominal ultrasonography to rule out tumors or other alterations, and of these, two patients presented nodular heterogeneity and were referred to the abdominal resonance imaging for investigation of these lesions. They were referred to the hepatology service. In the other patients, the findings of the imaging were compatible with homogeneous hepatomegaly.

In the present study, we found a low frequency of hepatic comorbidities in patients with chronic HF. In addition, we found a large number of patients with altered LS evaluated by HE that was not associated with liver diseases, suggesting that these results are due to hepatic congestion caused by HF.

We did not find in the medical literature research with active search for liver diseases in patients with HF. The studies evaluated liver function tests and their correlation with congestion and prognosis. Many patients with severe HF have laboratory abnormalities of liver function, which are attributed to liver congestion. Our data confirm this finding, since the prevalence of associated liver diseases was low. Even among the 12 patients with serology positive for hepatitis B or C, only one had abnormalities in the liver ultrasonography.

The hepatic elasticity measurement was initially proposed to evaluate primary liver diseases. To this propose, the cuts are varied, depending on the etiology. Over time, liver stiffness was investigated in congestive states, such as HF, and it was observed that many patients with decompensated HF had the altered examination. There is no cut-off for these cases, varying from 7.0 to 8.5 kPa in the studies. High value of hepatic stiffness at admission associated with increased mortality, hepatic cirrhosis and congestive heart failure, with a mortality rate of 20.8% in patients above 8.0 kPa in the elastography with a significant statistical value. Some authors, which was compatible in most cases with hepatic congestion, correlating with NT-proBNP. The majority of patients with acute HF had elevated hepatic rigidity values above 7.65 kPa as well as levels of NT-proBNP that tended to decrease with their clinical improvement, and in this study it was shown compatible in outpatients.

The results showed an important correlation between LS and markers related to increased venocapillar pressure [16-20]. Some authors corroborate in similar situations: Saniguchi et al. suggested LS as an index of systemic volume. High value of LS at hospital admission associated with increased mortality, hepatic cirrhosis and congestive heart failure, with a mortality rate of 20.8% in patients above 8.0 kPa in elastography with a statistically significant value. Moderate association of LS with clinical congestion and volumetric overload assessed by biomedance, not correlated with degree of hepatic fibrosis in the histopathology, and as a predictor of HF severity. In our study, hepatic rigidity correlated with NT-proBNP, a cardiac stretch marker, influenced by congestion.

In relation to laboratory hepatic data, gamma glutamyl transpeptidase and direct bilirubin were above baseline, correlating with HE, and ratified the expected changes in liver congestion in patients with decompensated HF, although transaminases and phosphatase alkaline levels are not high in our ambulatory patients. These laboratory tests are often elevated in patients with HF, correlating with the degree of systemic congestion and greater severity [21,22]. This was confirmed in the Roman Registry of Acute Heart Failure (RO- AHFS), where transaminases were higher in patients receiving higher doses of venous diuretics and in those who used inotropes and vasopressors, being an independent predictor of worsening renal function and admission to intensive care.

Some patients with positive serologies for hepatitis B or C virus were not aware of the disease. This fact alerts us to the need to exclude the associated liver diseases in HF patients, because despite the low prevalence, if not diagnosed early, delayed treatment may occur, with increased morbidity and mortality. In the present study, the large number of patients affected by hepatitis A in the past emphasizes their precarious basic health condition.

Based on the results of the present study in outpatients, HE may prove to be a method for assessing congestion and may be useful for monitoring response to treatment. It may also work as a prognostic factor, as demonstrated in other situations in patients with HF.

In relation to the HE, some limitations deserve comment. First, it is necessary to obtain a success rate in the signal capture. This success rate requires adequate training and also depends on factors related to the patient. In our study, the success rate was high, with a small loss of patients, mainly due to the lack of the XL probe, adequate for certain types of chest. In addition, there is still no standardization in the evaluation of variables in HF patients [23].

In patients with chronic HF, the presence of hepatic comorbidities is low, but not negligible. Most laboratory abnormalities of liver function are related to the presence of congestion. A significant number of patients have altered liver stiffness when evaluated by HE. However, these abnormalities seem to be due to hepatic congestion as a result HF.