Background: Rheumatic Mitral stenosis is a concern in developing world. Quantification of the left atrium (LA) strain by bi-dimensional speckle tracking echocardiography is a new diagnostic technique. Objectives: To assess the left atrium function by Two-Dimensional Speckle-tracking echocardiography in patients with moderate to severe mitral stenosis (MS), among the patients undergoing balloon mitral valvotomy (BMV) procedure.
Methodology: Echocardiography examination was conducted among 37 patients with rheumatic MS, before and after 24 hours of BMV were included. Functional assessment of LA was done by the assessment of MS by planimetry method, mean pressure gradient and two-dimensional speckle tracking echocardiography (STE). Distribution of mitral valve area (MVA), myocardial perfusion grade (MVG), LA volume, STE 4C and STE 2C were assessed before and after treatment. Comparison of variables between pre-test and post-test of mean pressure gradient (MPG), STE 4C, STE 2C and global longitudinal strain (GLS) was done using Student’s “t” test and comparison of MVA and LA volume was carried out using Wilcoxon signed rank test with p-value<0.05 considered as significant.
Results: Mitral valve area increased to 1.7+0.11 cm2 post- BMV with a statistical significance of p<0.0001. LA volume showed a marked reduction after BMV i.e. 51.34 ± 20.14 sq.cm. There was a significant improvement in the LA strain i.e. STE 4C, STE 2C and GLA; with p<0.001.
Conclusion: A marked improvement of the LA function among the patients with symptomatic mitral stenosis was observed, which was an indicator of successful BMV, with the aid of STE.

Mitral stenosis (MS) is characterized by narrowing of the mitral valve orifice. It is the most commonly involved valve in rheumatic heart disease which usually presents with exertional dyspnea, palpitations and in late stages chronic heart failure. Dilation of left atrium leads to disorganization of the atrial muscle fibres and fibrosis of the left atrium (LA) [1,2]. The thickening begins from the tips of the leaflet and it progresses to commissural fusion, calcification and fusion of the chordate, in the later stages reduces the opening of mitral valve [3]. Treatment for mitral stenosis involves medical therapy, percutaneous mitral valvuloplasty and surgical therapy [4,5]. Since a few decades, balloon mitral valvotomy (BMV) has become the treatment of choice for patients with symptomatic rheumatic MS. During BMV, a balloon is introduced across the mitral valve by transseptal or retrograde route. Inflation of the balloon fractures the rheumatic fusion of the valve leaflets at commissures, thereby improves leaflet excursion and orifice area [6].

Echocardiography is a commonly used non-invasive tool and is best suited for the evaluation of atrial function. LA function is assessed echocardiographically using volumetric analysis with maximum, minimum and pre-A wave LA volumes and derived functions which is quickly generated from speckle-tracking analysis, doppler spectrum of transmitral, pulmonary venous and left atrial appendage flows and tissue doppler [7]. Two-dimensional Speckle-tracking echocardiography (STE) is a non-invasive ultrasound imaging that does not depend on the angle of image. It is a novel method having potential advantages over left ventricular ejection fraction or fractional shortening measurement in the early detection of LV systolic dysfunction [8]. The use of 2D STE is a feasible technique for the assessment of myocardial LA deformation [9].

There are limited studies conducted on the assessment of LA function with the use of 2D STE. Recent literature review suggests a paucity of researches in this regard. The study assessed the LA function by strain using 2D STE, LA volume function in patients with symptomatic moderate to severe mitral stenosis before and after 24 hours of BMV.

This prospective case study was conducted in the Department of Cardiology with 37 patients from February 2018 to February 2019. Patients with LV ejection fraction (EF)= ≥ 50%, presence of symptomatic moderate to severe rheumatic MS, who underwent successful percutaneous mitral balloon valvotomy were included in the study. Patients who had coexistence of more than a mild degree aortic valve disease, low quality echocardiographic image, LA appendage clot, and moderate to severe mitral regurgitation were excluded from study. Sample size was calculated based on the effect size of 0.544 with a level of confidence at 95% and power of the study as 90% to obtain a total sample size of 37 patients. The Institutional Ethics Committee approval was obtained prior to the study and a written informed consent was obtained from the subjects before participating in the study. All the patients underwent echo examination before and after 24 hours of BMV. All the patients were assessed for LA function by strain using different methods.

Planimetry method is a direct measurement of MVA by 2D echo (Figure 1). It was obtained by taking three consequent cycles of mitral valve level and measuring the area including commissures in mid diastole to get the maximum area [2,12].

Doppler gradient was assessed in a normal acoustic apical four chamber view, as parallel alignment of ultrasound beam and mitral valve flow gives the maximum gradient. A fine acoustic window was used to get a well-defined Doppler signal so that peak velocity, peak pressure gradient (PPG) and mean pressure gradient (MPG) by velocity time interval (VTI) of mitral inflow were recorded. PPG was derived by the peak velocity whereas MPG was the relevant hemodynamic finding, which was influenced by the LA compliance and LV diastolic function. The aligning of the ultrasound to the flow was very important as it might underestimate the value. In atrial fibrillation (AF) the average of 5 cycles with a close possible heart rate with a least variation of R-R interval was calculated as mean gradient [12].

ECG gated AP4C and AP2C chamber view was taken. Both the images were acquired at the end of systole. LA area was traced by Simpson’s method where both the views showed LA volume. Pulmonary veins and atrial appendage were excluded while tracing LA area, as shown in Figure 2 [13]. 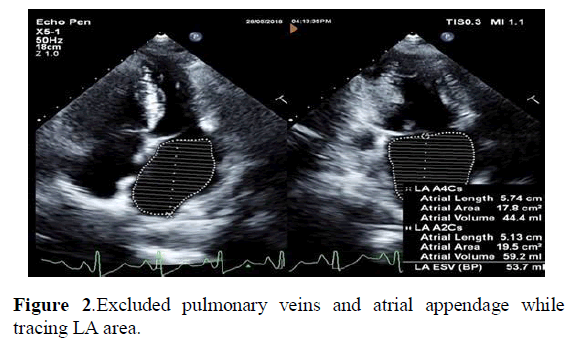 STE was performed on standard 2D gray-scale imagining. ECG gated AP2C and AP4C views were acquired on EPIQ 7C echo machine filled with a X5 matrix probe. Transthoracic acquisition was made with breath- hold for 5-7 seconds and 5 loops were imported to offline analysis [14].

Data was analyzed using R software version 3.6.0 and Excel. Categorical data was presented in terms of rates, ratio and percentages and continuous data expressed as mean + standard deviation (SD). Comparison of MVA and MPG before and after treatment were assessed by Wilcoxon ’ s test. Measurements of LA volume, STE 4C, STE 2C, and GLS before and after treatment were assessed by Paired t-test. p<0.05 was considered as significant.

A total of 37 patients were included in the study. The baseline characteristics are depicted in Table 1.

Patients were grouped broadly into six categories based on their age. The mean age of patients in the study was 33.89 ± 11.79 years and nearly half of the population were in the age group of 20-30 years followed by 31-40 years. A higher incidence of females was reported.

Comparison of various parameters before and after BMV are presented in Table 2.

Table 2: Comparison of different measurements before and after treatment.

Atrial function is usually assessed by atrial volume. Atrial volume is operator and load-dependent. These kinds of indices do not precisely assess atrial reservoir function. The use of 2D STE allows non-invasive evaluation of global LA function [15,16]. In the present study, the LA function was assessed by using 2D STE in patients with symptomatic moderate to severe mitral stenosis before and after 24 hours of BMV. Quantification of regional and global LA distortion by 2D STE was valuable to evaluate the LA function estimation and pulmonary capillary wedge pressure function [17].

In the present study, among the 37 patients, females constituted about two-third the population. This was similar to the findings seen in the study conducted by Rohani et al. which also showed a high prevalence of female population in the study [2]. In terms of the age, the mean age of the study subjects was 33.89 ± 11.79 years which was in concordance with a study conducted by Roushady et al. which reported the mean age of patients with MS as 31.9 ± 6.3 years [18].

Mitral valve area below 1 cm2 causes an increase in the left atrial pressure which further gets transmitted to the pulmonary vasculature and results in pulmonary hypertension and eventually pulmonary congestion and edema. Measurement of MPG provides an important estimation of the severity of mitral stenosis. The left atrium plays a significant role in modulating left ventricular filling and assessment of its function is an important marker of cardiovascular disease and adverse cardiovascular outcomes [3,19]. Hence assessment of MVA, MPG and LA strain has a crucial role in the quantitative assessment of mitral stenosis. A statistically significant increase in the mean value of MVA was observed post-BMV in the present study with p<0.0001. Studies carried out by Reddy et al. and Rohani et al reported a similar increase in the MVA post-BMV with a statistical significance of p<0.001 [1,2]. With respect to MPG, the current study reported a marked reduction post-BMV with a statistical significance of p<0.0001. Sengupta et al. reported similar results with marked reduction in the gradient from 14.3 ± 7.1 at pre-BMV to 5.5 ± 3.3 mm of Hg post-BMV [20]. The LA strain in this study showed a significant increase from pre-BMV to post-BMV by 13.15 ± 4.99 to16.90 ± 4.94 respectively with a statistical significance of p<0.0001. Various other studies also investigated the acute effect on LA pre-BMV and post-BMV, the findings of which were commensurate with this study. The studies reported a remarkable increase of LA post-BMV with a statistical significance of p<0.001 [2]. With regards to the LA strain, a statistically significant improvement of p<0.0001 was observed post-BMV. Another study conducted by Reddy et al. reported a significant difference in the improvement of LA strain with p<0.001 which was in concordance with the present study [1].

Overall, in the current study, it was observed that successful BMV was beneficial for the patients since their symptoms reduced significantly. This might have further aided in the improvement of cardiac chambers which helped to increase the left and right ventricular ejection fraction. Future studies are warranted to be conducted in a larger population considering the right and left ventricular strain to provide an effective tool in evaluating the efficacy of 2D STE over other methods.

This study highlighted the use of BMV which resulted in a marked improvement of the left atrium function among patients with symptomatic moderate to severe mitral stenosis within 24 hours of procedure. However, further in-depth analysis is required in order to evaluate whether the improvement in LA strain results in a decrease of atrial fibrillation incidences during long-term follow-up.