Within fish species, there can be considerable variation in the sizes of eggs produced by individual females. Specifically within the family Salmonidae, the relationship between egg size and hatching time is uncertain. This study examined eggs obtained during the spawning of landlocked fall Chinook salmon from Lake Oahe, South Dakota, USA. Diameters were obtained from the eggs of 24 randomly-selected females spawned in October, 2017, and the number of days to hatch was recorded after incubation at 11°C. Mean egg diameter was 7.22 mm and ranged from 6.36 to 8.36 mm. Over 90% of the eggs survived, with mean hatching occurring from 46 to 49 days of incubation. Significant correlations were observed between egg diameter and time-to-initial-hatch (r=0.581; p=0.003), as well as between egg diameter and mean hatching time (r=0.450; p=0.027). There was no correlation between egg diameter and survival to hatch (r=-0.363; p=0.081). These results are the first reported relationship between egg size and time-to-hatch in landlocked fall landlocked fall Chinook salmon.

Spawning: Landlocked fall Chinook salmon from Lake Oahe, South Dakota were spawned on October 16, 2017 at Whitlocks Spawning Station near Gettysburg, South Dakota, USA. Milt was collected from males, pooled in a container, and kept on ice until use. Eggs from 24 females were used in this study. Each individual female was pneumatically spawned using compressed oxygen at low pressure to express the eggs into a mesh net. Lake water was added to the spawn to activate the sperm for fertilization. After 2 min eggs were rinsed with lake water and allowed to water harden in lake water for at least 1 h prior to shipment. This process was repeated for each of the spawns used in this study (24 times).

Egg Measurement: Ten eyed eggs from each of the individual female spawns were then randomly selected and placed within round, wire-mesh, labeled baskets (8.9 cm diameter, 4.5 cm deep), and randomly placed into one of two semi-square 190 L tanks. Each tank contained 12 baskets, with each basket containing eyed eggs from an individual female. The diameters of three eggs from each spawn were randomly selected and measured to the nearest 0.01 mm using a digital caliper (SPC O/P Digimatic Caliper; Mitutoyo America Corporation, Aurora, Illinois, USA). Tank flows were set to 15 L/min using the same water source as the incubation stack. The egg baskets were checked daily, and the number of eggs that had hatch or died was recorded. Percent (%) egg survival to hatch was calculated dividing the initial number of eggs (10) by the number of eggs that survived and multiplying this amount by 100.

Data Analysis: Regression and correlation analysis was used to examine possible relationships between the variables. All data analysis was done using SPSS (9.0) statistical analysis program (SPSS, Chicago, Illinois, USA), with significance predetermined at p<0.05. This experiment was carried out within the American Fisheries Society Guidelines for the Use of Fishes in Research and within the guidelines of the Aquatics Section Research Ethics Committee of the South Dakota Department of Game, Fish and Parks. 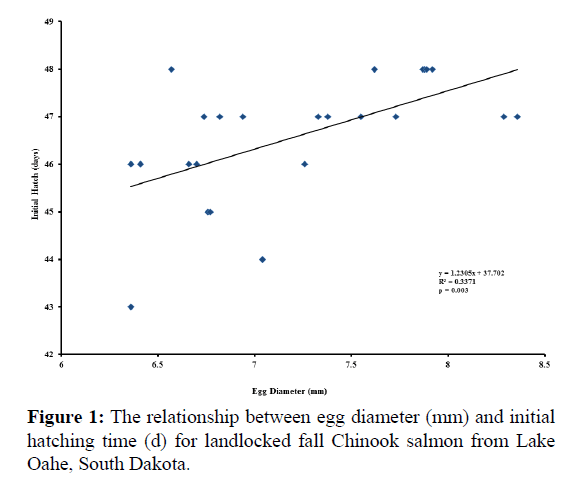 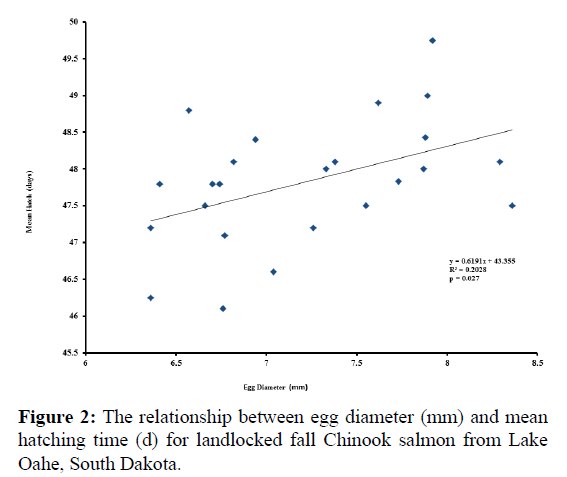 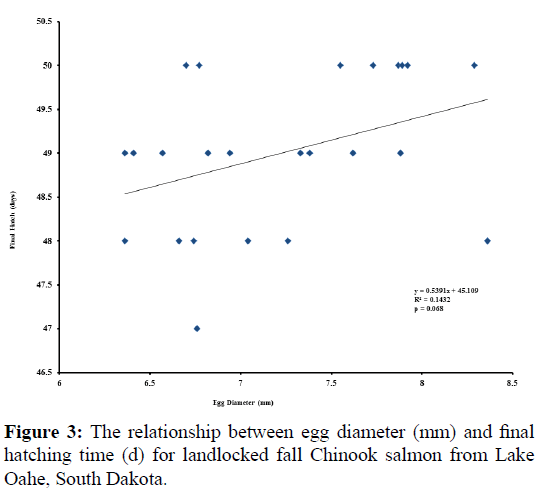 The positive relationship between egg size and hatching time observed in this study is supported by the results reported by Thorpe et al. (1984) and Self et al. (2018) in Atlantic salmon and steelhead trout respectively. However, Einum and Fleming (2000) reported no such relationship in a different population of Atlantic salmon. Kinnison et al. (1998) stated that egg size was not related to hatching time in a New Zealand population of Chinook salmon. Likewise, other studies have also found no relationship between egg size and hatching time in salmonids (Beacham and Murray, 1985; Beacham et al., 1985; Leblanc et al., 2016). What are some possible reasons for the discrepancies among the studies?

Egg size varies between populations of fish species, between fish within a population, and also within the spawn of individual females (Beacham and Murray, 1987; 1993; Einum, 2003; Leblanc, 2016; Self et al., 2018). This variation may possibly explain the different results among the studies examining egg size in relation to hatch timing. Indeed, in comparison to ocean-run Chinook salmon in their native range, the landlocked, completely freshwater Lake Oahe salmon population produces smaller females that exhibit dramatically different reproductive characteristics (Barnes et al., 2000; Young et al., 2016). The differing results may also be due to the different egg incubation temperatures used in each study (Réalis-Doyelle et al., 2016; Fuhrman et al., 2018). Lastly, different techniques have been used to determine egg size. For example, egg size was defined as egg mass by Beacham et al. (1985), Kinnison et al. (1998), and Self et al. (2018), whereas egg size was defined by egg diameter by Pauly and Pullin (1988) and this study.

This is the first documentation of a positive relationship between egg size and hatching time in landlocked fall Chinook salmon from Lake Oahe, South Dakota, USA. This relationship is far from universal among salmonids, and may be unique to the Lake Oahe Chinook salmon population.

We thank Jill Voorhees for her assistance with this project. 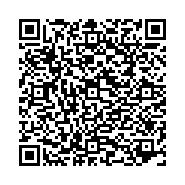