African locust bean (Parkia biglobosa) is a legume which can be processed into condiment. Rhodanese is a sulphurtransferase enzyme. It catalyses the degradation of cyanide to a less toxic metabolite, thiocyanate. Rhodanese purication and biochemical characterization were carried out in this study. The activity of this enzyme from Parkia biglobosa was evaluated and the kinetics of the rhodanese enzyme reaction, including pH and temperature profiles, substrate specificity and effects of metal ions were assessed. Studies on the rhodanese enzyme from other systems have been compared with the results of this study. Rhodanese was isolated from Parkia biglobosa and purified using ammonium sulphate precipitation, CM-Sephadex, and Reactive Blue 2-agarose column chromatography. The purified enzyme has a specific activity of 3.69 RU/mg with a percent yield of 0.20. Km and Vmax values of 7.61 mM and 0.65 RU/ml/min were obtained respectively when KCN was used as a substrate while values of 11.59 mM and 0.57 RU/ml/min was obtained with Na2S2O3. The enzyme showed preference for sodium thiosulphate (Na2S2O3) among different substrates tested namely Mercapto-ethanol (HOCH2CH2SH), Ammonium per sulphate (NH4)2S2O8), Ammonium sulphate (NH4)2SO4), Sodium sulphate (Na2SO4), Sodium metabisulphite (Na2SO5). Optimum temperature and pH of 50?C and 8 were obtained respectively. Chloride salts tested showed little or no inhibitory effect at 1 mM concentration with the exception of HgCl2 and MnCl2. However at 10 mM concentration, the divalent metals; MnCl2 HgCl2, CaCl2, BaCl2 inhibited the enzyme. The present study showed that locust bean seeds possess a cyanide detoxifying enzyme with suitable kinetic properties which renders it safe for consumption.

Rhodanese (thiosulphate: cyanide sulphur transferase (E.C. 2.8.1.1)) is a ubiquitous enzyme found in all living organism across all kingdoms. It generates thiocyanate from a sulphur donor and free cyanide. Rhodanese also transfers sulphane sulphur from glutathione persulfide (GSSH) to sulphite producing thiosulphate and from thiosulphate to cyanide producing thiocyanate [1]. The enzyme has been documented to perform other physiological role in living organism other than cyanide detoxification which includes sulphur and selenium metabolism, synthesis or repair of iron-sulphur proteins [2], H2S detoxification [3], Neuromodulator [4].

African locust bean tree (Parkia biglobosa) is a perennial tree grown in Nigeria, especially in the North and South Western part of the country [5]. It is acclaimed for having nutritional, economic, industrial and medicinal importance [6]. The seed is processed by fermentation and used as condiment and helps to intensify meatiness in soups, sauces and other prepared dishes [7,8]. The condiment has different local names in Nigeria viz; Iru, dawadawa, ogiriigala etc.

Other than the nutritional benefits, the tree has several important uses namely; nitrogen fixation [9] enhances soil stability, nutrient cycling and provides shade [10]. The leaves, husks and pods can be processed into livestock feed [11,12]. The industrial uses include manufacture of soap, production of particle board [13].

Rosaceae, Euphorbiaceae, Fabaceae, or Gramineae family of plants is known to be cyanogenic [14]. Cyanide is an irreversible inhibitor of cytochrome c oxidase leading to inhibition of oxidative phosphorylation, reduction in ATP level, generation of reactive oxygen species (ROS) and depolarization of mitochondria membrane leading to opening of permeability transition pore. Cyanide poisoning results in nausea, vomiting, diarrhea, dizziness, weakness, mental confusion, and convulsions followed by terminal coma and death [15]. Several factors contribute to cyan genesis including nature of soil, fertilizers application. There is gradual increase in HCN concentration as the plant ages [16].

Locust bean pods (Parkia biglobosa) were purchased from a local market in Ogbomoso, Nigeria. They were identified and authenticated at the Department of Biology, Ladoke Akintola University of Technology, Ogbomoso, Nigeria.

The assay for rhodanese was based on the methods of Sorbo and Aminlari et al. The reaction mixture contained 0.25 ml of 50 mM borate buffer (pH 9.4), 0.1 ml of 250 mM potassium cyanide, 0.1 ml of 250 mM sodium thiosulphate and 0.1 ml of the enzyme solution in a total volume of 0.55 ml. The reaction mixture was incubated at 37°C for 1 min, and the reaction was stopped with the addition of 0.25 mL of 15% formaldehyde. The production of thiocyanate was determined spectrophotometrically by the addition of 2.5 ml of 1% ferric nitrate (in 13% nitric acid) reagent and optical density reading was taken at 460 nm. One rhodanese unit was defined as that amount of enzyme which formed l mmol of thiocyanate during the 1 min incubation period. The reaction was linear with time during the 1 min incubation period.

In this section, total protein was determined spectrophotometrically by Bradford reagent.

Effectof salts on the catalysis

Chloride salts (monovalent and divalent) were tested to assess their relationship with enzyme activity. The salt solutions were buffered with 50 mM borate buffer (pH 9.4). The salts used include; NaCl, KCl, BaCl2, HgCl2 and MnCl2 at 0.001 mM, and 0.01 mM prepared from standard solutions of 0.1 mM.

The result of the purification protocol for locust bean rhodanese showed a specific activity 5.09 RU/mg with yield of 0.06%. The purification procedure is summarized in Table 1. Figures 1 and 2 show elution profile on CM-Sephadex C-50 and Reactive Blue-2 Agarose respectively. 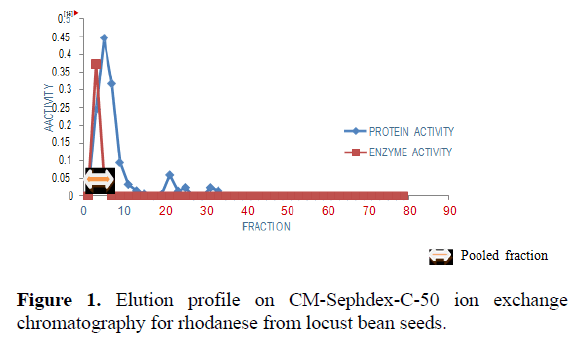 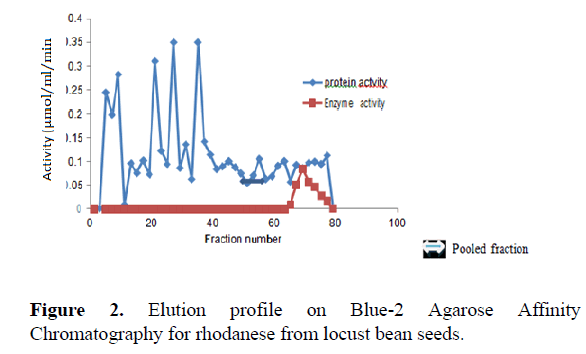 Rhodanese followed Michaelis-Menten kinetics with a Km for sodium thiosulphate (Na2S2O3) of 13.95 mM with Vmax of 0.48 RU/ml/min estimated from a double reciprocal plot (Table 2 and Figure 3). 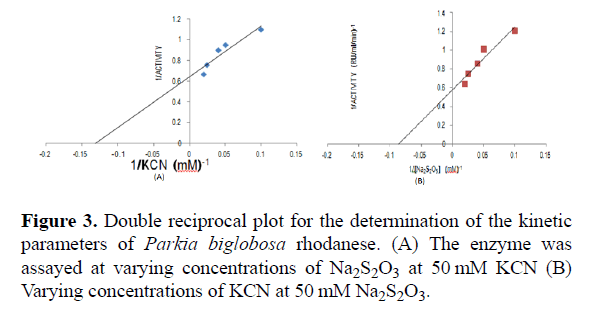 Table 2. Comparism of purification values of rhodenese from different sources.

The Km for potassium cyanide (KCN) of 11.14 mM with Vmax 0.46 RU/ml/min estimated from double reciprocal plot (Table 3 and Figure 3A). 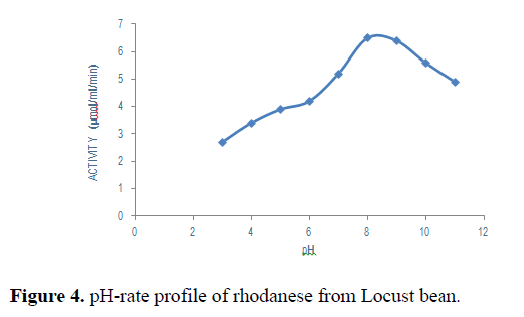 The effect of temperatures between 30°C to 100°C on the rhodanese activity showed that optimum temperature for the enzyme was 50°C (Figure 5). 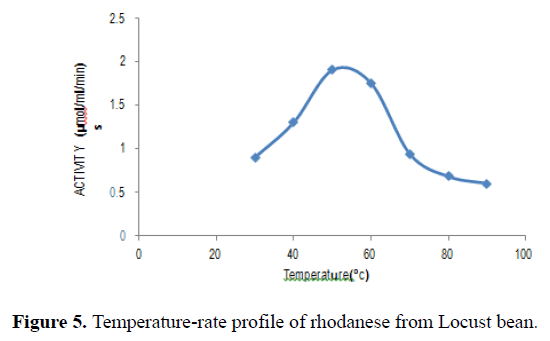 The result of the effect of various sulphur compounds (inhibitors) on the activity of rhodanese is presented in Table 4. The activity is expressed relatively to the activity of the enzyme with sodium thiosulphate as the control. Percentage activity decreased in the order Na2S2O3>HOCH2CH2SH>(NH4)2S2O8>Na2S2O5. The effect of metal ions (NaCl, KCl, HgCl2, BaCl2, MnCl2) at concentrations of 1 mM and 10 mM was studied. The enzyme activity was inhibited by the divalent salts in the order HgCl2>MnCl2>BaCl2>CaCl2 in a concentration dependent manner while KCl, NaCl showed no inhibitory effect.

The presence of rhodanese activity has been studied in plants, such as on ginger, cabbage, and cassava [17-21]. The enzyme has been proposed to play a role in cyanide detoxification [20]. Hatzfeld and Saito (2000) were the first to isolate and characterize in plants two cDNAs encoding rhodanese isoforms in Arabidopsis thaliana, AtRDH1 and AtRDH2. In plants, a close relationship exists between cyanogenesis and rhodanese activity, which shows that the enzyme provides a mechanism for cyanide detoxification in cyanogenic plants [22,23].

Parkia biglobosa rhodanese was isolated and purified. The partially purified enzyme has a specific activity of 5.21 RU per mg of protein and 0.10% recovery (Table 1). Various purification values have been obtained for rhodanese from other sources as presented in Table 2.

Rhodanese catalysis is a non-sequential double displacement mechanism as was reported by Sorbo (1953) for bovine liver rhodanese. Either of the substrates may bind first to the rhodanese active site. Researchers on rhodanese have reported various affinities between the substrates. Locust bean seeds rhodanese had a higher affinity for potassium cyanide compared to sodium thiosulphate. This is similar to the affinitiy demonstrated by rhodanese from cytosol of fruit bat liver, hepatopancreas of Limicolaria flammea and guinea pig kidneys [24].

The apparent Km values of locust bean obtained from Lineweaver-Burk plots, for potassium cyanide and sodium thiosulphate were 7.61 and 11.59 mM, respectively (Tables 3-5). However, some other researchers reported a contrasting higher affinity for sodium thiosulphate compared to potassium cyanide. Such findings include that of rhodanese from Zinginber officinale rhizome, tapioca leaf, and goat liver [20,25,26].

Table 5. Effect of Metals on Rhodanese from Locust bean seeds.

pH-rate profiles reveals the role of acidic and basic functional groups in catalysis [27]. Figure 5 depicts the pH-rate profile for rhodanse extracted from Parkia biglobosa. With increase in pH level from 4 to 9, increase in activity was observed. The optimum activity was found to be at pH 8. Optima pH values of 7.0-11.0 have been reported. Akinsiku et al. [28,29] working on the African catfish liver obtained a pH value of 6.5. Ehigie et al. [20] reported for the ginger rhodanese an optimum pH of 9.0, Chew and Boey in 1972 worked on tapioca leaf and obtained a value of 10.2 to 11, Ebizimor reported for the sheep liver rhodanese of optimum pH of 8.5 and pH of 10.5 for the rainbow trout liver [30,31].

Activity of the enzyme was measured over the temperature range of 30°C to 100°C. The optimum temperature for Locust bean rhodanese was 50°C. This has been compared with that obtained from other sources (Table 6).

Table 6. Comparison of optimum temperature of rhodanese from different sources.

Sulphur compounds tested drastically reduced the activity of the enzyme which is a confirmation that the enzyme has preference for sodium thiosulphate as substrate compared to the others (Table 4). This is in agreement with the findings reported by Ehigie et al. and Okonji et al. Inbition studies provide a clue into the nature of the enzyme molecule and that of its active site. The inhibition my mercaptoethanol is evident of the presence of sulphur containing amino acids at the active site of the enzyme molecule. Mercaptoethanol disrupt protein structure by breaking disulphide bonds either intramolecular or intermolecular.

The influence of metal ions on the enzyme activity could be as a result of change in conformation of the enzyme molecule or change in the ionic interactions at the active site between the enzyme and the substrate. A number of metal ion binding residues in protein molecules have been identified e.g. cysteine, histidine, tyrosine, and asparagines [32-41]. The inhibition by metal ions (Table 5) used in this study may be due to local interactions with sulphurhydryl groups at the active center or change in the ionic nature of the whole molecule resulting into changes in the conformation of the enzyme. Further experimental procedures are required to fully elucidate the mechanism of inhibition.