Inverted Papilloma of Middle Ear and Mastoid: A Rare Entity

Inverted papilloma is a papillary tumor of middle ear and mastoid. Its occurrence is extremely rare [1-3] and less than 20 cases are published till Dec.2012 in English literature [4]. It may occur as a primary lesion or as an extension to sinonasal tumors. The disease is characterized by its recurrence and malignant potential [3-5] (Table 1). The recurrence and malignant potential is quite higher in respect to sinonasal tumors [3,4].

Table 1: Main characteristics of cases of inverted papilloma (IP) of the middle ear published in the literature.

Mr. A, 23 years old, presented with the chief complaints of aural fullness, otorrhea along with marked hard of hearing similar to that of CSOM. This was not associated with facial palsy, vertigo or tinnitus.

Otoscopic examination reveals granulation in middle ear projecting as aural polyp with purulent discharge. CT scan (Figure 1) showed polypoid tissue in middle ear and mastoid. No evidence of ossicular destruction or bone erosion noted in CT scan (Figure 2) Patient was thus diagnosed as a case of active squamosal chronic otitis media and underwent canal wall down mastoidectomy with wide resection cavity. During the surgery, the polypoidal tissue was found to obliterate fully the pneumatic cells and middle ear which was sent for histopathological examination.

Figure 2: CT scan shows no evidence of ossicular destruction or any bone erosion. 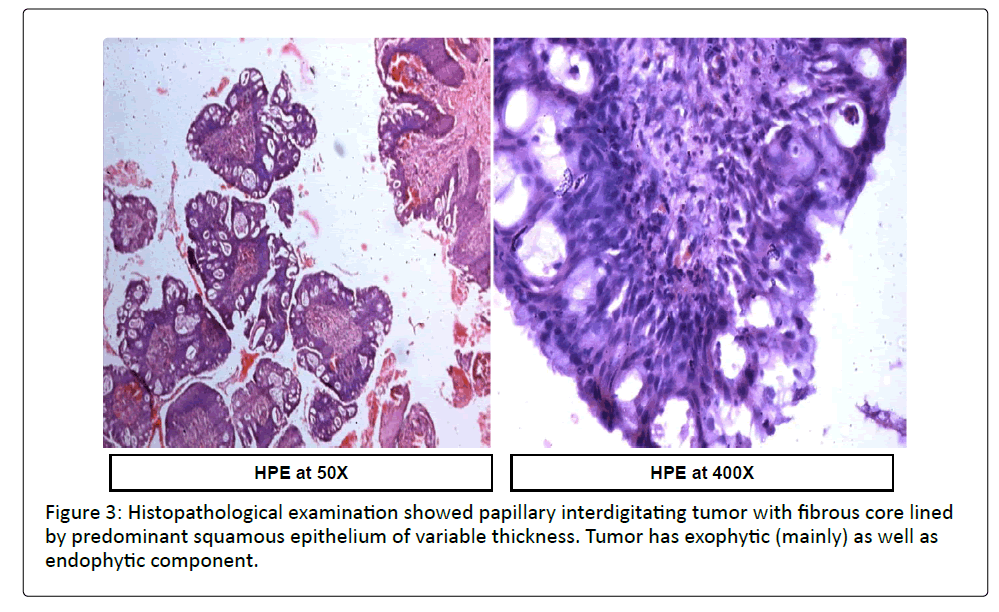 No evidence of malignancy was seen.

Patient was under follow up for two years without any signs of recurrence.

The preferential primary site for inverted papillomas is lateral nasal wall and paranasal sinuses. Extrasinonasal sites where Inverted papilloma may arise include the pharynx, the lacrimal sac, and the middle-ear space [6,7]. The involvement of middle ear and mastoid is rare. There are various hypotheses [3] in literature for development of Inverted papilloma in middle ear and mastoid. The first hypothesis is that there is migration of paranasal sinus IP cells via the Eustachian tube. The second hypothesis is that of an abnormality of embryonic migration of ectopic Schneiderian membrane into the mucosa of the middle ear. The third hypothesis is that of chronic otitis media stimulating the development of Schneiderian mucosa. The role of Human papilloma virus is controversial and is often attributed to HPV 6 or 11 infections.

The signs and symptoms of nose and sinus disease are non-specific. There may be unilateral nasal obstruction, epistaxis, hyposmia, rhinorrhea, and repetition rhinosinusitis. Middle ear involvement may manifest through hypacusis, aural fullness, and otorrhea. In some cases, papillomatous tumors can be seen in the outer ear canal.

The risk of malignant transformation among sinonasal inverted papilloma is estimated around to be 7% while the risk of recurrence is about 15%. The Inverted papilloma of middle ear and mastoid is more dangerous as the malignant transformation rate is around 35.3%, significantly higher than that observed in paranasal sinus IP and the recurrence rate is also quite 56.25% [3,4].

Due to limited available data, it is difficult to comment on treatment of choice. However, the treatment preferred by authors is surgical resection with wide resection cavity leaving disease free margins [5,6]. Radiotherapy can be given but its use is limited due to osteoradionecrosis and reserved for cases showing evidence of malignant transformation [1,2].

Despite its rarity it should be put in differential diagnosis of granulations of middle ear. Every ENT surgeon should sent granulation from middle ear for routine histopathological examination so that diagnosis of this recurrent and potentially malignant disease should not be missed. Long-term follow-up after removal of inverted papilloma of the middle ear and mastoid is mandatory as the malignant transformation rate is high (35.3%) much more than that of paranasal sinuses.

Disclosure of Interest: The authors declare that they have no conflicts of interest concerning this article.