It is a case report of intravascular foreign body migrating from pharyx. The patient give no definite foreign body intake history and was misdiagnosed by community clinic, so failed initial treatment. It was a fish bone was found chest computed tomography (CT) unexpectedly and was successfully taken out through surgery. Some experience we?ve drawn from the case and would like share in this article. Upper aero-digestive foreign body is quiet common for otolaryngologist, especially among emergent cases. But for the foreign body migrated out of lumen into the neck soft tissue is rare event. Even some complications coursed by foreign body in this region can be fatal. In this article, we report a case with a pointed fishbone stuck in the Internal jugular vein.

It’s a 48-years man who complained of cough, expectoration, fever for 1 week and was diagnosed of lung infection in primary hospital. Laboratory test result : WBC 10.23 × 109/L?NEUT% 80.2%?TBAb?+?? ESR 80 mm/H?CRP 201.73 mg/L?PCT 17.14 ng/mL; ALT 79.3 U/L?AST 59.0 U/L?TB 40.1 umol/L?DB 31.0 umol/L?r-GT 166.2 U/L. Chest CT scan indicate lung infection and negative to belly ultrasonic scan. After 7-days anti-infective therapy, no progress had been achieved. Then this patient was transferred to Infection Dept. in our hospital. The results from our lab indicate that the infection was getting deteriorated: WBC 11.60 × 109/L; NEUT% 81.90%?PCT 18.9 ng/ml?BNP 352.00 pg/ml?ALT 116.00 U/L; AST 67.00 U/L;ALB 28.70 g/L. 2 days later a mass on his right neck was observed without uncomfortable feeling. So neck CT scan was arranged and an X-ray opaque foreign body embraced with thrombus located within his right internal jugular vein (Figures 1 and 2). By further inquiry, the man remind that more than one week earlier, he was trapped by fish bone with uncomfortable feelings disappeared spontaneously very soon. Being well prepared, the foreign body was successfully taken out though 2 hour long surgery. It’s a 2.8 cm pointed fish bone. The man was discharged 1 week later without complication (Figures 3 and 4). 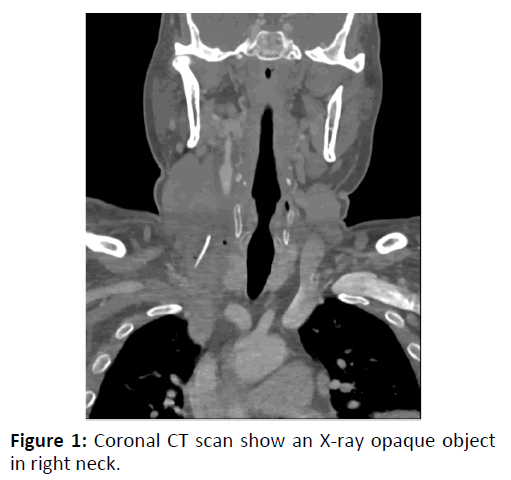 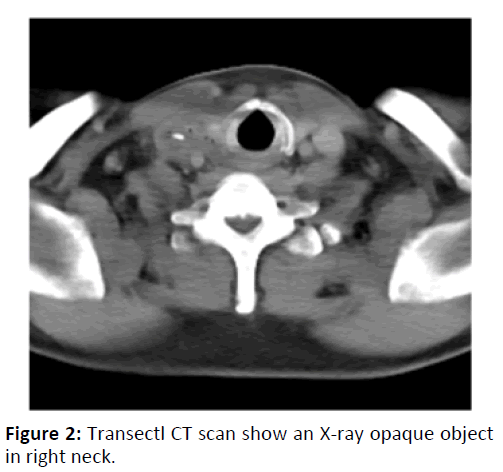 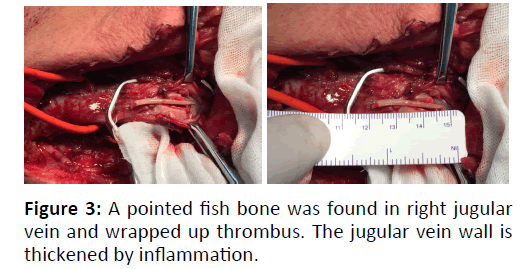 Figure 3: A pointed fish bone was found in right jugular vein and wrapped up thrombus. The jugular vein wall is thickened by inflammation. 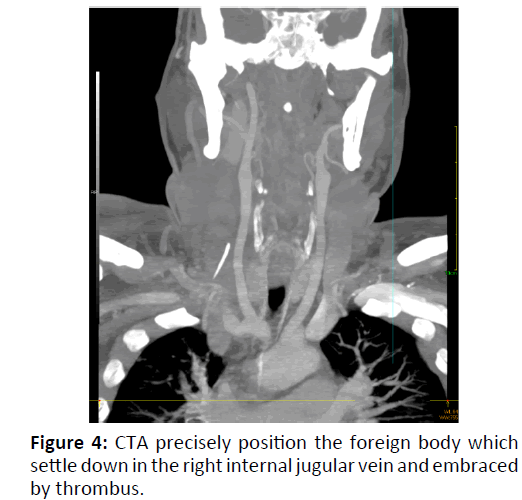 Figure 4: CTA precisely position the foreign body which settle down in the right internal jugular vein and embraced by thrombus.

Ingested foreign body could be everything, with something even beyond your imagination [1-3], but animal bone from food especially fish bone is most frequent among them. It might occur by accident or on purpose. Most cases of upper aerodigest??i ve foreign body can be with specific history and symptoms of pharynx and neck: sore throat, foreign body sensation, irritable cough, hemoptysis, dysphagia, etc. If foreign body restrains within upper aero-digestive lumen, it won’t be difficult to identify and deal with. But if foreign body had migrated out of the lumen and without specific indicator, that will confuse the doctors even result in misdiagnosis and [4,5] . Due to cervical vertebra and larynx cartilage locate posteriorly and anteriorly, the foreign body incline to go through pharyngeal wall laterally to neck soft tissue. In those cases we suppose that with contract and squeeze of pharyngeal and tongue muscle the fish bone pierce the mucosa of pharynx and get through neck soft tissue, then migrate into jugular vein and settled down by accident. Because the whole process was so quick and jugular vein endothelium is lack of sensation nerve that the symptoms were not so apparent. Those lead to ignorance of such an important foreign body intake history.

In this case, the primary complain from patient was cough, expectoration and fever. CT scan was prone to lung inflammation. Lab test observed increased neutrophil, CRP, ESR. All that evidence above would make doctor prone to draw conclusion of lung infection, especially when it comes to aged man with long smoking history. Because the original source of infection was not identified, it’s easy to understand why initial anti-infection therapy failed.

Due to lasting incentive of inflammation, vaginae vasorum and surrounding area proliferated. The anatomic compartments are not very clear. The jugular vein wall was thickening seriously. Those make identifying vessel and foreign body even harder, meantime increase the risk of other important structure, especially carotid artery and vagus. To minimize those risks, we implied CTA (Figure 4), ultrasonic inspection preoperatively and intraoperatively (Figure 5). It should be emphasized that the control of both ends of thrombus is key procedure, especially proximal end. We could assume that if we ligated vessel on the thrombus, it must produce some push on both ends moving against to each other, that might makes the proximal part of thrombus detached from the vessel wall and plunge into right atrium with blood flow back to hart. Then pulmonary embolism could be not far away. It is reported that the mortality rate of pulmonary embolism is up to 20-30%. So pinpointing both ends of thrombus including the foreign body is key point in the operation. As Figure 5 shows, supersonic inspection can tell exactly how long the thrombus had produced and where the foreign body settled. With those information cleared, the follow steps could be easier and safer: ligated the jugular vein beyond both ends of thrombus and cut off the vein between. 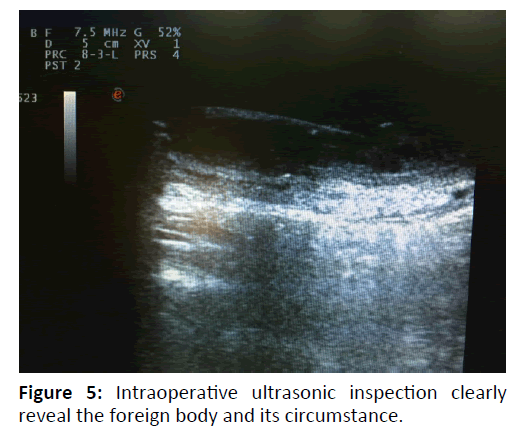 Most upper aero-digestive foreign body can be easily deal with, if the patient turn to us immediately and right measures is adopted in the first time. In this respect, the public education should tell people that after swallowing something unexpected, turn to the doctor for checking, and do not try to push them dawn by taking some mass food that will complicate the situation. Drinking vinegar will end in invalidation also, even not a few people hold a belief that it can work. The vinegar will irritate the wound to make the pain even hasher and mucosa swollen that will make the foreign body more difficult to be identified. When foreign body migrate out of aerodigestive lumen, CT could be helpful. When vessel is involved CTA and ultrasonic inspection can help us evaluate what is going on in the vessel. Especially intra-operative ultrasonic inspection can make the surgery more precisely and safer.