Introduction: Radial Artery Occlusion (RAO) is a complication of the Transradial Approach (TRA). Ipsilateral ulnar artery compression was proposed as an effective technique to prevent acute RAO after TRA. In the present study, we evaluated the effects of ipsilateral ulnar artery compression obtained by the TR-band device on the ulnar site after classical hemostasis (“turnedTR band”) on radial flow characteristics after 24 h from the procedure. Methods: 131 patients were randomized 1:1 to receive 2 h of ipsilateral ulnar artery compression after classical hemostasis with the Turned TR-Band technique (TTR-B) vs no intervention (CG). Peak Systolic Velocity (PSV) and radial caliber reduction were evaluated by duplex ultrasonography at baseline and 24 h after each procedure. The 24 h occurrence of RAO was also ascertained. Results: None of the 131 patients (n=62 TTR-B, n=69 CG) showed procedure-related complications. No relevant difference in the percentage rate of changes in PSV vs baseline was observed between groups (-7% in the TTR-B, -9% in the CG, p=0.57). 4 patients randomized to TTR-B vs 9 patients in the CG group showed radial caliber reduction at the puncture site (OR 0.72; 95% C.I. 0.19-2.69, p=0.63). None of the patients in the TTR-B experienced RAO, whereas 1 case was recorded in the CG (0% vs 1.4%, p=0.55). Conclusions: The ipsilateral ulnar artery compression through the “TTR-Band” procedure is feasible and safe. The 24 h rate of vessel caliber reduction and RAO is not superior to conventional hemostasis, with a non-significant tendency toward lower reduction in PSV

The Transradial Approach (TRA) for percutaneous coronary procedures has demonstrated multiple benefits during last years, and its application is growing rapidly worldwide. This can be explained by its relatively lower potential for access site bleeding and high patient comfort/ satisfaction, while maintaining an overall high procedural success rate [1-9]. The most common complication of TRA is the Radial Artery Occlusion (RAO), which occurs in a very variable percentage of cases [10-13]. Endothelial injury of the radial artery and decrease in blood flow after sheath insertion are predisposing factors for RAO [10-15]. The importance of maintaining radial artery patency after TRA is fundamental for the large number of uses of this vessel in the common clinical practice [10-14,16]. Different factors can influence RAO’s occurrence: from the type and measure of the sheath used for the angiography [17-19] to anticoagulation [20] and vasodilators administration [21]. Ipsilateral ulnar artery compression has been proposed as an effective technique to prevent acute RAO after TRA and to facilitate radial artery recanalization 37-38. In the present study, we evaluated the duplex ultra-sonographic characteristics of the radial flow and the occurrence of RAO at 24 h from the application of ipsilateral ulnar artery compression after classical radial artery hemostasis with the TR-band device turned on the ulnar site (namely “turned-TR band”) for two hours.

From April 1st to August 31st 2017 all the patients referred to our catheterization laboratory for coronary angiography using TRA were evaluated for study enrolment. Patients with: 1) absence of the radial access; 2) treatment with warfarin or novel oral anticoagulants; 3) inability to tolerate heparin; 4) intraoperative therapy with GPIIb/IIIa inhibitors; 5) hemodialysis treatment; 6) previous axillary lymph node dissection were excluded from the study. Informations upon the study protocol and procedures were provided to eligible patients, and a written informed consent was obtained before randomization.

In all patients, as usually performed in our catheterization laboratory and in accordance to the rules of Good Clinical Practice, after sterile preparation and preservative lidocaine chlorohydrate 10 mg infiltration using an insulin needle, the radial artery was accessed with a conventional percutaneous approach using a high puncture site (over 4 cm proximal to radial styloid process). Twenty-five-centimeter-long 6-F hydrophilic introducer sheath was inserted into the radial artery lumen over a 0.021-inch guidewire. No intra-sheath administration of vasodilators (nitroglycerin or verapamil) was routinely used. After sheath insertion, once reached the thoracic aorta with the angiographic wire, a dose of unfractionated heparin (70 u.i./kg) was administered intravenous. Diagnostic coronary angiography was performed using 6-F catheters. Choice of catheter shape and number of catheters was left up to the operator’s discretion. At the end of percutaneous coronary procedure, normal hemostasis was achieved in all patients as follows: an inflatable band (TRBandTM) was positioned in all patients at the arterial access site by aligning the green marker, which is located on the center of the compression balloon, 1-2 mm proximally to the puncture site, and staring the strap on the wrist with the adjustable fastener; a slow injection of 15-18 mL of air was performed while simultaneously the sheath was removed. The balloon was then decompressed to allow fast purging of waste material, and quickly reinflated with 1 mL to 2 mL of additional air to re-establish hemostasis. After 1 h of continuous compression at the puncture site, the band was gradually deflated and then permanently removed at the end of 2 h, and a light dressing was applied.

At the end of normal hemostasis, patients were randomized 1:1 to received selective compression of the ipsilateral ulnar artery for further 2 h obtained by turning the TR-Band device to the ulnar site, with the intent to reach a reversal blood flow current through the radial vessel (Turned TR-Band group, TTR-B, Figure 1) vs no intervention (Control Group, CG).

Figure 1: Illustration of the TTR-B technique.

All the procedures were performed by interventional cardiologists experienced in the TRA: a total of five operators performed all the procedures. Hemostasis monitoring was carried out by the medical and nursing staff of the ward. A Duplex ultrasonography of the radial artery, including visual caliber assessment, measurement of Peak Systolic Velocity (PSV), and evaluation of radial artery patency was performed before the procedure and repeated after 24 h.

A total of 131 patients were enrolled in the present study. Of those, 62 were randomized to the TTR-B procedure and 69 to CG. Baseline clinical characteristics are reported in Table 1.

No relevant differences were found between groups in terms of age, sex, anthropometric characteristics and comorbidities. The TTR-B procedure was feasible and free of complications in all the patients (absence of hematomas, nerve injury or ischemic pain complications). At baseline, PSV was 103 ± 29 cm/s among TTR-B vs 104 ± 31 cm/s among CG, whereas at follow-up, PSV was 90 ± 31 cm/s among TTR-B vs 94 ± 28 cm/s among CG (both p vs baseline <0.001). No significant pre/post changes in PSV values were detected between groups (time x treatment F=0.32, p=0.57, Figure 2), although the percentage fold change was slightly lower in the TTR-B (-7%) than in the CG (-9%) indicating a non-significant tendency toward lower reduction in PSV among TTR-B. 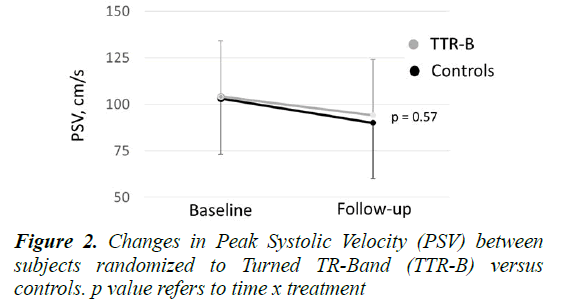 In the present study, we evaluated the short-term impact of the “turned TR-Band” technique on the radial flow and the occurrence of RAO in comparison to classic hemostatic procedures. The “turned TR-Band” technique consists in turning the TR-Band device to the ulnar site for further two hours at the end of classical hemostatic procedure after trans-radial approach, in patients undergoing cardiac catheterization, with the intent to obtain a reversal blood flow current through the radial vessel. The duplex ultrasonography characteristics of the radial flow, evaluated at 24 h after the procedure, confirmed the substantial effectiveness and safety of this procedure. In fact, both PSV and the rate of caliber reduction at the puncture site in the TTR-B group was not superior to controls. Moreover, no cases of RAO at 24 h after the procedure were observed in the TTR-B group vs 1 case (1.4%) observed in the CG (p between groups not significant). The low overall rate of RAO and other complications, at variance with other previous reports, substantially confirmed the safety of the hemostatic procedure in our catheterization laboratory.

TRA access has been shown to reduce mortality and adverse events even in high-risk patients [22,23] with lower incidence of vascular complications than conventional transfemoral one [24]. The reduced discomfort and early mobilization [25,26] make it particularly required by hospitalized population, becoming the default access site in our catheterization laboratory. However, TRA is not free from challenges and complications, partly depending on the experience of the interventional cardiologist, which range from trivial radial artery spasm to RAO [27]. The reported incidence of RAO varies from 0.8% to as high as 38% in the published data [28-32]. This complication run often quiescent, because of the dual vascular supply of the hand from the palmar arch, but limits the future use of the vessel for PCI, as a conduit for bypass grafting, or fistula formation in hemodialysis patients. Baseline patient characteristics [33] (body mass index, diabetes) as well as procedural variable [34,35] (sheath size, anticoagulants) may influence RAO. Bernat et al. proposed post-procedural homolateral ulnar artery compression as an effective method for the treatment of acute RAO, particularly in patients with verylow and low-dose of heparin [36]. Other techniques based on the application of a continuous ulnar compression during the patent hemostasis technique, were also proposed with the aim to reduce RAO’s rates: in a randomized controlled trial, the ipsilateral ulnar artery compression at the Guyon’s canal obtained by placing a cylindrical composite and a circumferentially applied Hemoband, was shown to reduce the 30 day risk of RAO after TRA [37]. Similarly, Koutouzis et al. showed that ipsilateral ulnar artery compression for 1 h reduced the incidence of radial artery occlusion at discharge [38]. In both studies simultaneous ulnar compression has been investigated. On the other hand, Tian et al. showed a beneficial effect of continuous manually ipsilateral ulnar artery compression applied at 1 h after the RA bandage removal, with a RAO incidence of 0.075% [39]. However, 1 h manual compression after the end of classical hemostatic procedure may represent a major concern for daily application of this method. Based on this, results from our study clearly show that the “turned TR-Band” technique is feasible, easily performed, free of complications, and it may be particularly suitable in high-throughput settings. In our study we found a very low (1.4%) incidence of RAO even in the control group testifying that, apart from the post-hoc techniques to maintain the vessel’s patency, the primary approach used to obtain the access, as well as it’s monitoring, is crucial for the radial artery’s preservation. The TRA performed with our standard procedural protocol (high puncture site, 6-F hydrophilic introducer sheaths, correct anticoagulation with unfractionated heparin, careful modes and times of compression) contributed to this finding. Moreover, results from our study showing non-significant tendency toward lower reduction in PSV and reduced rate of vessel caliber reduction at 24 h among TTR-B group, may be promising and should be confirmed in appropriately sized studies testing the effectiveness of the “turned TR-band” approach in reducing the medium and long-term occurrence of RAO and other complications.