How Does a Hookah That is Smoked as an Alternative to Cigarettes Affect Nasal Mucociliary Clearance?

Objectives: Active tobacco smoking has been casually associated with nasal mucociliary clearance (MCC). Smoking through a hookah as an alternative to tobacco smoking has been shown in some scientific studies to have several toxic effects on human health. However, no study has been conducted on the effects on nasal MCC of the hookah as an alternative a way of smoking tobacco. Aim of this study is to research how use of hookahs affects nasal MCC.

Methods: The study included 40 subjects in the control group and 38 subjects in the hookah group. The hookah group was divided into two subgroups: those who used hookahs regularly, once every week (N1 group), and those who used hookahs more than once a week (N2 group, of 2 to 5 sessions/week). The N1 group had 20 subjects, while the N2 group had 18 subjects. The MCC test was performed on each subject and results were recorded in minutes.

Results: The nasal MCC value in the total hookah group was found to be significantly higher than in the control group (p<0.05). The nasal MCC value of the N2 group who used hookahs more than once a week was significantly higher than those of both the control group and the N1 group who used hookahs regularly, once every week (p<0.05).

Conclusion: Our study has shown that, especially when a hookah was used more than once a week, there was MCC impairment that put the participant at risk for respiratory tract diseases.

Cigarette smoking is one of the leading causes of morbidity and mortality worldwide. Long-term cigarette smoking causes both functional and structural changes in the respiratory airways [1]. Damage to the function and structure of cilia occur in the nose and upper airways, leading to changes in nasal mucociliary clearance (MCC). MCC is the primary defense system that the human airways and lungs have against harmful inhaled particles [2,3]. Any dysfunction in this defense system increases inflammatory events, and the respiratory system becomes prone to infections and obstructive airway diseases [4]. If cigarette smoking continues beyond a certain point, chronic obstructive lung disease and malignant tumors of the respiratory tract can occur, resulting in high mortality [5].

In recent years, considerable progress has been made worldwide in the fight against cigarette smoking. However, while the fight against cigarette smoking continues, alternative tobacco products have become available. The hookah is one of them. The hookah, also known as a shisha and a water pipe, is a traditional method of smoking tobacco [6,7]. With this method, the tobacco is smoked from a hookah device, which generally consists of five main components: a glass water bowl, a metal body, a pipe through which smoke passes, a clay bowl into which the tobacco is placed, and a mouthpiece.

Hookah smoking is continuing to become a social phenomenon throughout the world, and the false belief is that using a hookah is less harmful than smoking cigarettes [8,9]. The use of hookahs, already quite common in the Middle East and in countries of North Africa, has recently grown in popularity, especially among younger people of college age in the United States [10].

Smoking through a hookah as an alternative to cigarettes involves the use of tobacco, hookah charcoal, and various flavorings and has been shown in some scientific studies to have several toxic effects on human health [11,12]. However, there is no information on how hookah use affects nasal MCC. The aim of this study is to research how use of hookahs affects nasal MCC.

This prospective study was approved by the local ethics committee, and a written consent form was obtained from the people who participated in the study (number of approval of the ethics committee: 2017-881).

The study was conducted from March 2017 to May 2017. The control group was chosen from among voluntary hospital workers, whereas the group that smoked using hookahs included those who used hookahs in their homes or in cafés. The participants were briefed about the study, and informed consent forms were obtained. The participants who consented to the study had complete ear, nose, and throat examinations. Those who were found to be normal in the examination were required to complete the questionnaire shown below. Based on the examinations and the results of the questionnaires, the following people were excluded from the study: those who had preexisting respiratory tract infections, allergic rhinitis, or any major septal deviations and those who had undergone sinonasal surgical operations, were active or passive cigarette smokers, had systemic diseases that could affect nasal MCC (for example, diabetes mellitus and chronic kidney failure) and, with the aim of standardizing this study, those who had been hookah smokers for less than one year. After removing those who did not meet the inclusion criteria, the study included 40 subjects in the control group and 38 subjects in the hookah group. The hookah group was divided into two subgroups: those who used hookahs regularly, once every week (N1 group), and those who used hookahs more than once a week (N2 group, of two to five sessions/week). The N1 group had 20 subjects; the N2 group had 18 subjects.

Do you use a hookah?

How many sessions of hookah smoking do you have in a week?

For how long have you used a hookah?

Do you smoke cigarettes?

Have you ever had surgery on your nose?

Do you have any allergic disease?

Are you being treated for any chronic disease?

Various techniques measure the activity of the nasal mucosa. Stroboscopy, roentgenography, and photoelectron techniques can measure the activity of cilia, but these are expensive and are not appropriate for routine use. However, rhinoscintigraphy and saccharin tests are easy to obtain and apply. The saccharin test was chosen for our study for the evaluation of nasal MCC because rhinoscintigraphy has potential side effects.

To perform the saccharin test, the subjects were seated upright with their heads in a slightly extended position. The saccharin granules that were used measured 2 to 3 mm. After positioning the subject appropriately, the saccharin granule was placed 2 cm into the left nostril with the help of a 0 degree rigid endoscope. A ruler was used to measure a distance of 2 cm from the nostril. With the assistance of a chronometer, the subject was required to swallow every 30 seconds. Each subject had the saccharin test performed in the same manner. The time at which the subject tasted the saccharin was recorded in minutes. The subjects were required to maintain their positions throughout the entire test and were not allowed to take any deep breaths, to cough, to sneeze, to speak, or to smell for the duration of the test.

Age has been reported to be a factor that affects nasal MCC [13]. In addition, the temperature of the environment, humidity, and partial oxygen pressure are other factors that affect nasal MCC. For this reason, our study included subjects who lived in the same city, with the aim of standardizing the temperature, humidity, and atmosphere of the study. Nasal MCC of a normal nose is expected to be between 9 and 17 minutes [4].

The data were analysed using the SPSS 23.0 (USA) packet program. Percentage distribution and mean ± standard deviation (SD) were used in the descriptive statistics. Categorical data were analyzed using the chi-square test. Continuous data analysis in the independent groups was performed using the t-test and Kruskal-Wallis analysis. To identify the group that was found to be significant in the Kruskal-Wallis analysis, the post-hoc Mann-Whitney U test with Bonferroni correction was used, and p<0.05 was accepted as statistically significant.

Characteristics of the subjects

Table 1: Evaluation of nasal mucociliary clearance between the groups. 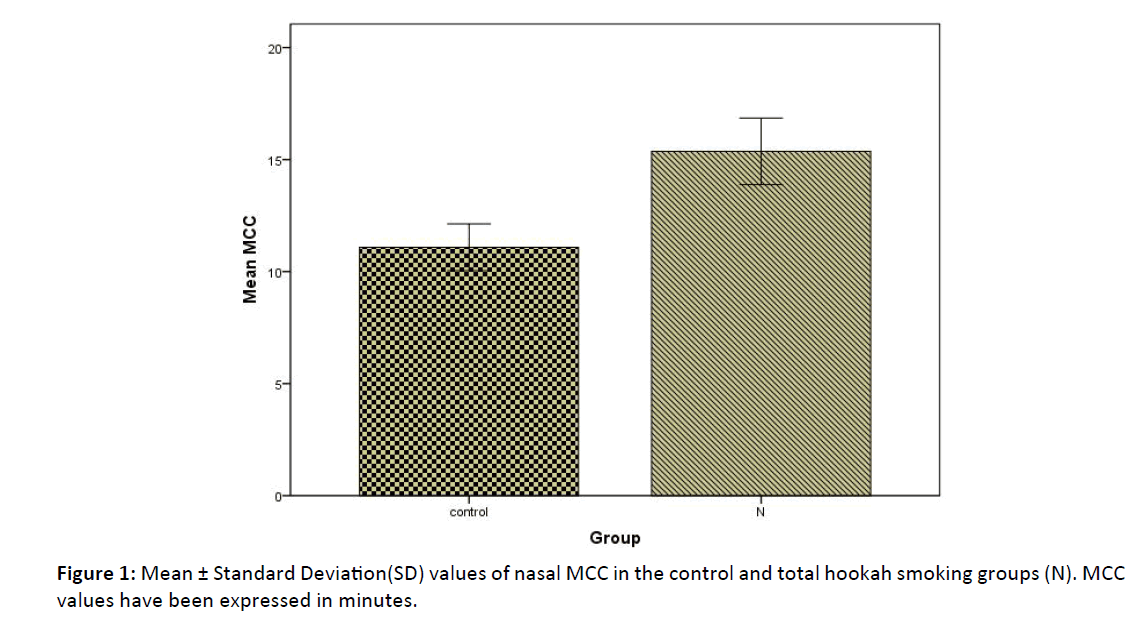 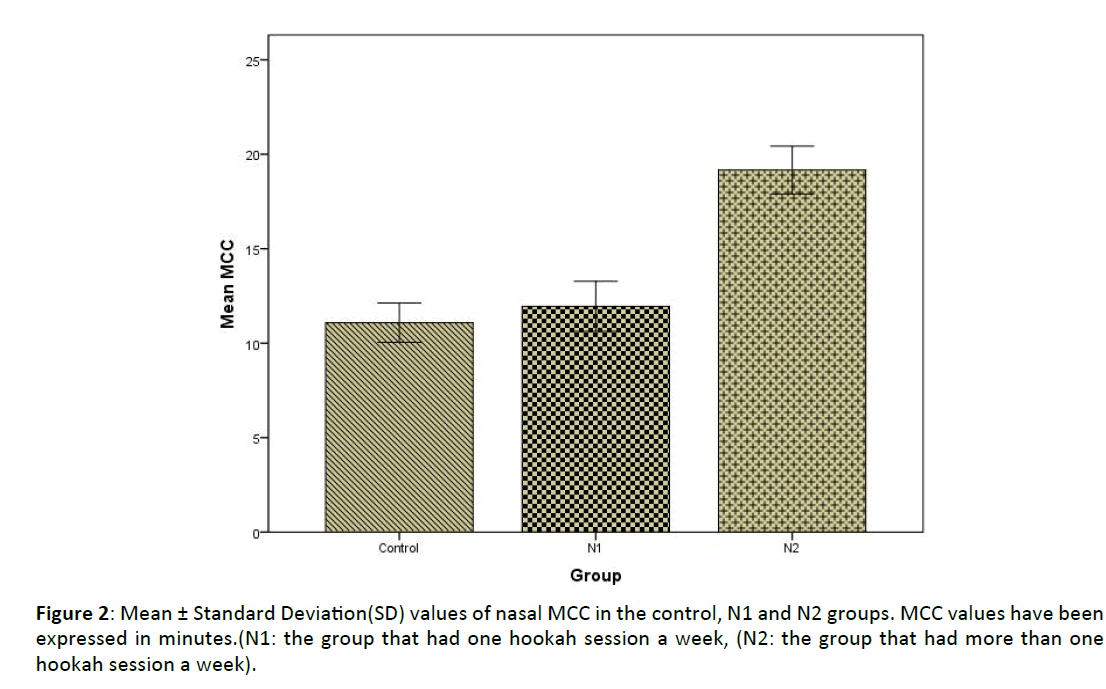 Nasal MCC is the first defense system against harmful stimulants from outside. Harmful particles that come from outside are trapped by the mucus layer and pushed to the pharynx by the cilia transport mechanism. They are later expelled from the body either through coughing or swallowing. This mechanism depends on three components: the volume and composition of airway surface liquid (mucus and periciliary fluid), the ciliary structure and beating frequency, and the mucus–cilia interaction [13].

Active smoking has been causally associated with nasal MCC, and the correlation has been described in detail in previous literature [14,15]. However, no study has been conducted on the effects on MCC of the hookah as an alternative way of smoking tobacco. Increased use of hookahs for tobacco consumption has recently been witnessed in developed countries such as the United States, especially among youths of college age [10]. This has become a public health problem, and the authorities are aware of it.

A number of studies have shown the negative effects that hookah smoking has on human health. Haddat et al. conducted a systematic review study that shows negative health effects, categorized as damage to the cardiovascular and respiratory systems, oxidative stress, reduced immunity, and cell cycle interference, which result from nicotine and chemical toxicant exposures8. This review study has shown that mild symptoms such as shortness of breath, coughing, and wheezing could develop in both active and passive hookah smokers. In addition, these could result in serious respiratory tract diseases such as chronic pulmonary obstructive disorder, chronic bronchitis, and asthma. These kinds of symptoms and diseases are similar to those seen in cigarette smokers. Cigarette smoking causes damage to MCC, resulting in the easy passage of harmful particles to the lower respiratory tract and the beginning of a chronic inflammatory process. In our study, impairment of nasal MCC is particularly prevalent in those subjects who had more than one hookah session a week. The risk associated with this amount of hookah smoking is similar to that of cigarettes for the abovementioned respiratory tract diseases.

Comparisons of the chemical compositions of cigarettes and hookahs have revealed some similarities. Nicotine, harmful gases such as carbon monoxide and volatile aldehydes, ultrafine particles, and carcinogenic polycyclic aromatic hydrocarbons (PAHs) are present in both cigarettes and hookahs [16-19]. After comparing a 45-minute hookah session to smoking a single cigarette, it was found that the hookah smoker had more nicotine and carbon monoxide concentration and 20 times more PAHs than the cigarette smoker [20]. A full 90% of carbon monoxide and 95% of the PAHs that are released during hookah smoking come from burning hookah charcoal. As mentioned previously, most of the toxic molecules in cigarettes are also present in hookah, and these toxic molecules may result in impairment of nasal MCC.

There are limitations to this study. One is the small number of participants, because there are relatively few people who use hookahs but do not smoke cigarettes as well. In addition, few people use hookahs on a regular basis. The other limitation is that, to standardize the study in terms of the varying weather conditions such as humidity and temperature that could change nasal MCC, the participants had to be chosen from among people who lived in the same city. As a result, a multicenter study containing a wider subject group could not be undertaken.

Our study has shown that, especially when a hookah was used more than once a week, MCC impairment resulted that put the participant at risk for respiratory tract diseases. Furthermore, in our study, nasal MCC values were not impaired significantly in the N1 group. This does not mean that smoking hookah once a week is not harmful to human health. As the sessions of hookah smoking increase, impairment of nasal MCC becomes more apparent. Specific studies with higher numbers of participants need to be conducted to research the effects of hookahs on systems and organs.

This prospective study was approved by the local ethics committee and a written consent form obtained from the people who participated in the study (number of approval of the ethics committee: 2017-881).