Diabetes mellitus is the most common endocrine disease which is characterized by hyperglycemia, altered metabolism of lipids, carbohydrates and proteins with an increased risk of much complication such as vascular diseases. During the past few years many bioactive drugs have been isolated from natural extracts. This work aimed to investigate the possible anti-diabetic effect of Egyptian honey bee venom (BV) treatments in the alloxan-induced diabetic rats via studying pancreas structure abnormalties and tissue damage biomarkers. 40 adult albino rats (140-180 g) were injected intraperitoneally for 6 weeks and divided into five main groups each of 8mice. The control group was injected with physiological saline solution (0.9% NaCl), diabetic group was injected with a single dose of alloxan solution (120 mg/kg), high and low dose BV treated groups were injected at a daily dose of 2 mg/kg and 1mg/kg BV after induction of diabetes respectively, and vildagliptin (Galvus 50) treated group was injected at a daily dose 10 mg/kg vildagliptin after induction of diabetes. Microscopic histopathological examination of pancreatic tissues showed marked decrease in the islets of Langerhans size accompanied with a significant decrease in the number of β-cells, insulin secreting cells, in the diabetic group. These abnormalities were healed after treatment of diabetic rats with BV which could have the ability to regenerate beta cells of islets of Langerhans. Along with these findings, the present study could certify that the bee venom normalized the various biochemical and histological abnormalities resulted due to diabetes metabolic disorders.

Diabetes mellitus (DM) is a significant public health problem, considered one of the highest challenges in our century owing to the number of people suffering from DM has massively increased in the last 20 years (Sandu et al., 2016). Globally, an estimated 422 million adults were suffering from diabetes in recent years, compared to 108 million in 1980. In low- and middle-income countries, diabetes prevalence has increased faster than in high-income countries (WHO, 2016). The prevalence of DM is constantly increased worldwide at an alarming rate, North Africa and Middle East have a prevalence of 9.1%, representing 35.4 million adults. Egypt is considered from the countries with the highest number of DM patients (7.8 million) (IDF, 2016). DM is a metabolic disorder that is characterized by chronic high blood glucose level that leads to complications in the eyes, kidneys, heart, vessels and nerves (Park and Jang, 2017). This chronic complex disease requiring permanent medical care with multifactorial riskreduction strategies beyond glycemic control (ADA, 2017).

Insulin and oral antidiabetic drugs are commonly used for the treatment of diabetes. The major classes of oral hypoglycemic drugs include biguanides, sulfonylureas, thiazolidinediones, α-glucosidase inhibitors, incretin mimetics, glucagon-like peptide (GLP) -1 agonists and dipeptidyl peptidase (DPP)-4 inhibitors (Thakare et al., 2017). Although many drugs are commercially available for use in the management of diabetes, their side effects and high costs underscore the need for natural products as a replacement therapy (Hossen et al., 2017). For example, metformin is a biguanide which can cause vitamin B12 and folic acid deficiency (Fogelman et al., 2017).

There is a significant increase in the medical use of natural products in the past decade (United States National Library of Medicine, 2013). Recently, much attention has been given to the venom of some animals in development of new treatments for many diseases one of them is DM (Roudbari and Imani, 2012). BV is a complex mixture of peptides, enzymes and low molecular components. These peptides including melittin, apamin, adolapin and the mast-cell degranulating peptide. Enzymes including phospholipaseA2 (PLA2), phospholipaseB, hyaluronidase, phosphatase and ᾳ-glucosidase. Non-peptides such as histamine, dopamine and norepinephrine, in addition to some sugars also present in BV (Bogdanov, 2015). BV has therapeutic effects against several diseases like Arthritis, nervous system diseases, heart, blood System abnormalities and skin disease (Park et al., 2010; kim and Jeon, 2014; Abdela and Jilo, 2016; Abdela and Jilo, 2016; Eze et al., 2016).

Pancreas is a glandular organ measured about 22 centimeters long and it possesses about 1 to 2 million islets of Langerhans in which β-cells have occupied 60 % of them (Ghorbani and Hashtrodi, 2014). Islets of Langerhans collectively considered the endocrine part of pancreas. Islets cell types include insulin-producing β-cells, glucagonproducing alpha cells, somatostatin-secreting delta cells and pancreatic polypeptide-secreting gamma cells (Jennings et al., 2015). Pancreas secrets glucagon which increases blood glucose levels and insulin which decreases them (Goke, 2008). The release of insulin and glucagon is suppressed by somatostatin (Hauge-Evans et al., 2009) whereas polypeptide (PP) regulates the exocrine and endocrine secretion activity of the pancreas (Katsuura et al., 2002; Batterham et al., 2003). Blood glucose level is low during sleep or in between meals and thus glucagon is secreted from α-cells to control hepatic glycogenolysis and also glucagon drives hepatic and renal gluconeogenesis to increase endogenous blood glucose levels during fasting. In contrast, insulin is secreted from β- cells in response to rising concentrations of glucose in the blood, such as those occurring after a meal (Komatsu et al., 2013). The aim of this study was to assess histological changes in the pancreas of alloxan-induced diabetic rats following Egyptian honey bee venom treatments.

Forty healthy adult male rats weighing 140-180 gram were used in the present study. All animals were housed in polyethylene (65cm×25cm×15 cm) home cages, with saw-dust covered floors at the Animal House of Zoology Department, Faculty of Science, Port Said University. The animals were kept at the room temperature of 25±5οC with a natural lighting cycle (12-h dark/light cycle). They were fed standard laboratory chow and given fresh tap water and ad libitium through a glass bottle with a capillary dropper fixed to the wall of a cage in a position to be available for rats. Water was changed and the cages were cleaned every day. All procedures on care and maintenance of the experimental animals were in accordance with International Guiding Principles for Animal Research. Ethical standards and guidelines for toxinological research was adapted to all the present experiments that were reviewed and approved by Port Said University Bioethics and Animal Ethics Committee and were carried out by authorized investigators.

Induction of diabetes in rats

Animals were subjected to fasting for 24 hours but were given free access to water. Alloxan monohydrate was purchased from Sigma-Aldrich Chemical Co., USA, and fresh solution of alloxan was prepared by dissolving it in normal saline 0.9% NaCl. And injected intraperitoneal (IP) at a dose 120 mg/kg body weight into the fasted rats (Yadav et al., 2008; Shabeer et al., 2009; Bahar, 2011; Das et al., 2012; Rashid et al., 2013). Blood glucose levels were determined after 72 hour of injection, using Acua Check (Germany). Animals with blood glucose level 200 mg/dl or over were supposed to be diabetic (Yadav et al., 2008; Shabeer et al., 2009; Bahar, 2011), these rats were separated at specific cadges.

Experimental groups and design of work 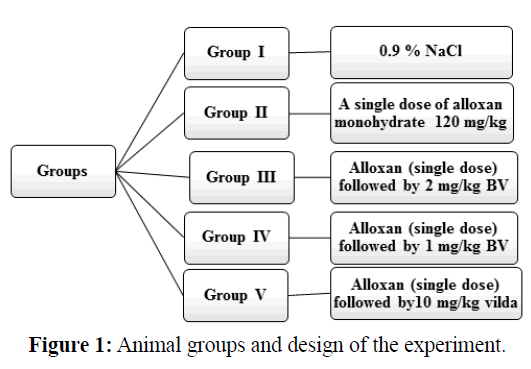 Figure 1: Animal groups and design of the experiment.

After collection of blood for biochemical assays, the animals were scarified and abdominally dissected. The pancreas was removed immediately from each animal and then washed within a physiological saline solution (0.9% NaCl) for the removal of the blood, which might obstruct the process of fixation. Samples were allowed to remain in fixative (10% Neutral buffered formalin) for 24 hours. The dehydration and clearing of the tissues were processed routinely and embedded in paraffin wax. About 5 microns thickness sections were prepared with microtome and mounted on clean glass slides and then they were de paraffin zed in xylene twice for 5 minutes and then rehydrated with graded alcohol and stained with hematoxylin and eosin (H&E) dye. The stained sections were examined and photographed by using microscope. Pancreas of diabetic group was compared with pancreas of the different treatment groups for histopathological changes.

Normal pancreatic tissues in plates 1, 2 and 3 (A) showed normal pancreatic tissue formed of pancreatic acini showing basal nuclei and amphophilic cytoplasm and islet of Langerhan's showing islet cells arranged in trabecular and acinar pattern with abundant eosinophilic cytoplasm and central small nucleus, separated by thin loose connective tissue with thin vessels. Islets have regular shape with a large number of β- cells which have a normal round shape with will distinct round nuclei. The islets covering connective tissue sheet is well distinguishable giving the islets their typical spherical shape. 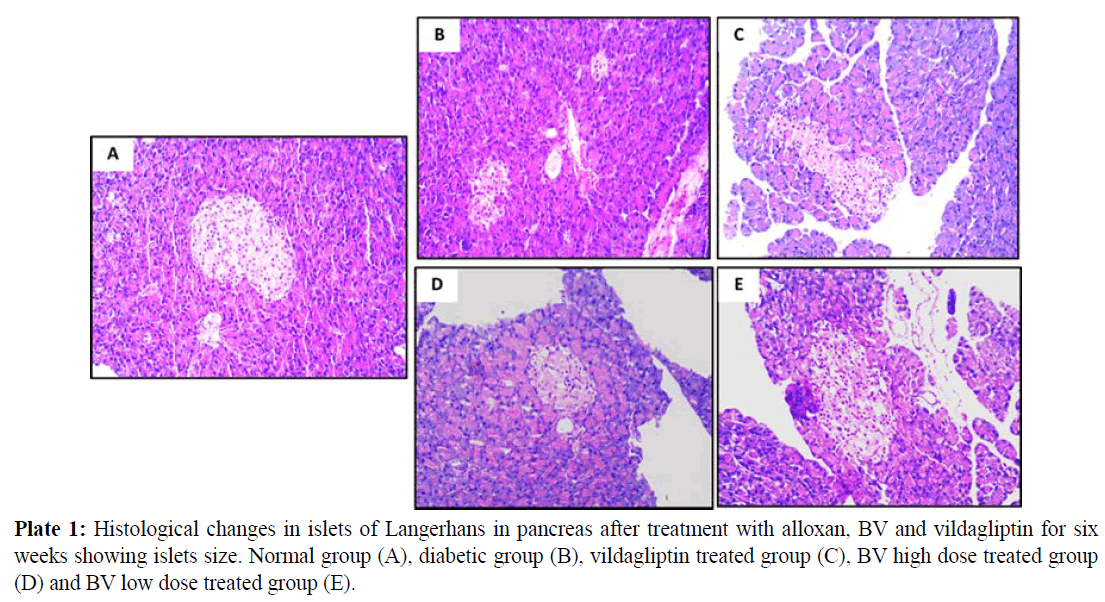 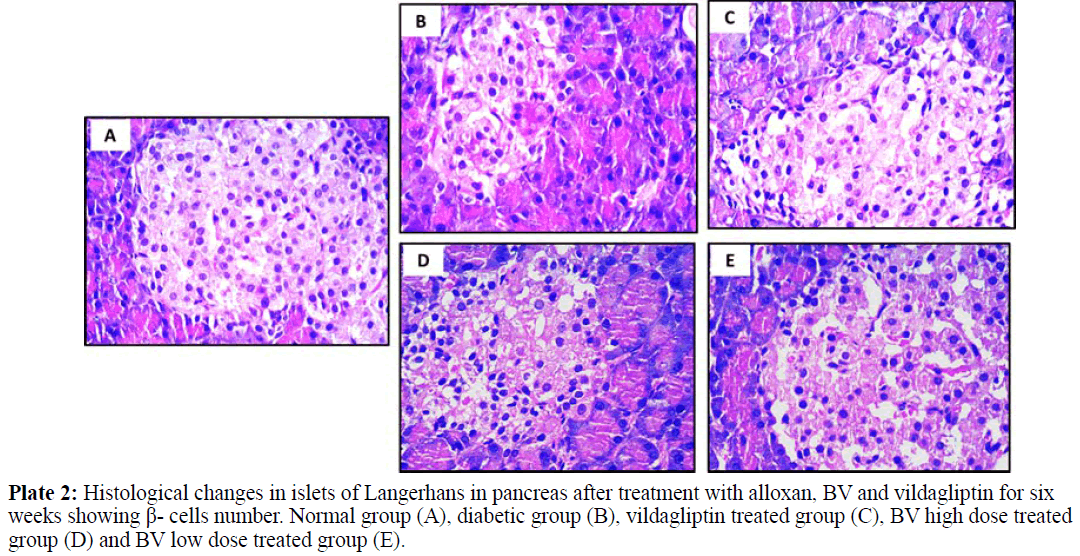 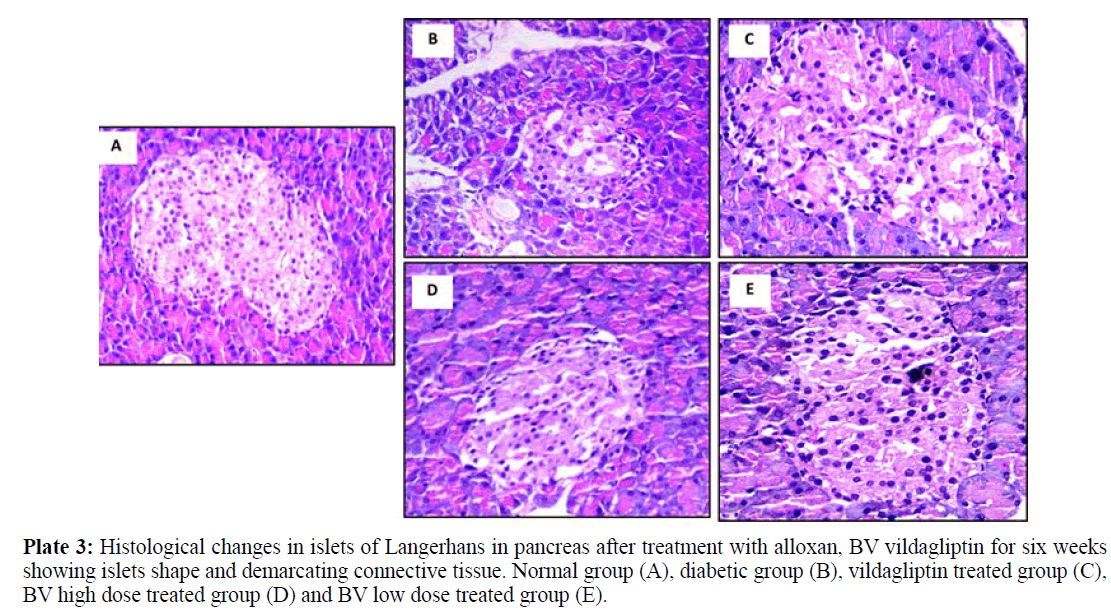 Diabetes mellitus is the most common endocrine disease accompanied with various metabolic disorders (Patel et al., 2016). It is characterized by chronic hyperglycemia and disturbances of carbohydrate, fat and protein metabolism associated with absolute or relative deficiency in insulin secretion or insulin action (Saravanakumar et al., 2009). This disease leads to hyperglycemia, hyperlipidemia, hypertension, atherosclerosis, retinopathy, neuropathy and nephropathy (Anfenan, 2014). Thus, an effective therapeutic strategy is in demand to prevent or delay the progression of pancreatic β- cells dysfunction or death (Miranda-Osorio et al., 2016). Oral hypoglycemic agents and insulin, currently used have serious side effects, so there is a need to find another more safe anti diabetic traditional medicine (Hossen et al., 2017).

Alloxan is widely used to induce diabetes in experimental animals by generation of ROS that causes damage of pancreatic β-cells. Alloxan and its reduction product, dialuric acid, has been reported to establish a redox cycle with the formation of superoxide radicals, which submit dismutation to hydrogen peroxide (H2O2) and a highly reactive hydroxyl radicals which are formed by Fenton reaction. Moreover, the action of ROS with a simultaneous massive increase in cytosolic calcium concentration cause rapid destruction of pancreatic β-cells and thus hyperglycemia is occurred (Rohilla and Ali, 2012). Inhibition of glucokinase enzyme is involved in the toxic action of alloxan on pancreatic β-cells (Dhanesha et al., 2013). Alloxan has the ability to depolarize pancreatic β-cells that further opens voltage dependent calcium channels and stimulates calcium inflow into β-cells. The increased concentration of Ca2+ ion contributes to supraphysiological insulin secretion that along with ROS has been noted to cause damage of β-cells (Lenzen, 2008; Etuk, 2010).

The histopathological observations in the present work confirmed the improvement in treated groups when compared with diabetic groups. The pancreatic tissue of diabetic rat demonstrated degeneration and vacuolizations in the Langerhan’s islet cells, decreasing in islets size, decreasing in β-cell number and also in the architecture of the islets. These data was in agreement with El-Esawy et al. (2016). So, the serum insulin level was decreased and the glucose concentration was increased. Treatment with low dose BV and vildagliptin restored the pancreas to normal architecture, regeneration of β-cell and enhanced the expression and the number of β- cells in the islets of Langerhans and so exerted the antihyperglycemic effects after six weeks of treatment. The degeneration in the islets showed in the histopathological results was compatible with the biochemical results in which MDA was significantly increased in diabetic rats and was significantly decreased after treatment.

Histopathological data obtained from the current study were also in consistent with Hadi et al. (2016) who reported that the size and number of pancreatic islets were decreased in diabetic rats in comparison to normal rats, while treated rats with mixture of plants extracts showed regeneration of both islets and acini.

The improvement of the histological structure of the pancreas may be attributed to melittin and phospholipase A2, the main components of BV, through suppression of pancreatic β-cells inflammation thus insulin secretion was increased (Simonsson et al., 2000; Park et al., 2008). Morgan and Montague (1984) and Kim et al. (1999) explained that BV improved glycemic control and increased insulin secretion through mellitin which can depolarize plasma membranes of β-cells. When Ca2+ channels are opened, large amounts of calcium enters the β-cells and stimulate them to secret insulin. These results in harmony with Gawad et al. (2016) who confirmed hypoglycemic activity of BV in diabetic rats.

BV has protective role on the management of serum biochemical changes and histological changes in β-cells of islets of Langerhans in diabetic induced rats. This could be either through suppression of pancreatic β-cells inflammation, antioxidant activity, promotion of insulin secretion or promotion of glucose uptake in adipose tissue with hypolipidemic activity through improvement of lipid uptake into adipose tissue and hydrolysis of triglyceride.