Olanzepine microsphere prepared by external Inotropic gelation technique by using sodium alginate and carbopol 974 P as a polymer and calcium chloride as a cross linking agent. In this formulation combination of sodium alginate and carbopol 974 P used as a polymer that helps to retard the releasing the drug and increases bioavaibility of drug. The Olanzepine microsphere has other characterization is in the term ofdrug content, drug entrapment efficiency, P XRD, Differential Scanning Colorimetry, FTIR , SEM, in vitro drug release and in vivo drug release.
The in vitro release pattern of Olanzepine microsphere studied in 900 ml of 0.1 N Hydrochloric acids, using USP dissolution apparatus I. The optimized batch F7 shows greater than 80 % of drug release that is due to using carbopol polymer that helps to retarded the drug release at targeted site over the other formulation. Optimized formulation shows better antidepressant action as compare to pure Olanzepine drug.

Microsphere are characteristically free flowing powder it is solid spherical smooth surface particle size is less than 200 μm. Microsphere are multiparticulate drug delivery system which are prepared to obtain prolonged or controlled drug delivery to improve bioavailability, stability and to target the drug to specific site at a predetermined rate. The sustained release system used to obtain maximum therapeutic efficacy, it’s most important to deliver the agent to the target tissue in the optimal amount in the right period of time there by causing less toxicity and minimum side effects. Microsphere using as a carrier for a drug its releases drug at a targeted site and shows action [1-3]. Olanzapine is antipsychotic agent belong to thiobenzodiazepines ring. It is a BCS Class II drugs which suffer from poor water solubility and high lipophilicity resulting in a highly variable oral bioavailability. Olanzapine used in treatment of schizophrenia and acute mania in bipolar disorders approved by FDA [4-6]. Despite such wide range applications, of Olanzepine are limited owing to its poor aqueous solubility and hepatic metabolism become difficult to achieve and maintain concentration of Olanzepine within therapeutic range.. Hence formulation of the mucoadhesive microsphere of Olanzapine by using Sodium alginate and carbopol 974 P polymer used to improve residence of dosage form in GIT, reduced dosing frequency and enhance bioavailability in the treatment of schizophrenia [7].

All ingredients were weighed properly according to the formulas given in Table 1.

Carbapol and alginate solution were prepared by initially dispersing the Carbapol (2%-6%) and sodium alginate (3% w/v) in water by mild heating (50°C) and stirredby magnetic stirrer. To this dispersion, Olanzapine (200 mg) was added and sonicated for 30 min. Then dispersion was then added drop wise by using 20-gauge hypodermic needle to solution of calcium chloride (5%-10% w/v) stirred at 500 rpm.

The gelled droplets were allowed to remain in calcium chloride solution for 30 minutes for complete curing, filtered and washed repeatedly but using deionized water in order to remove excess of CaCl2 that might have deposited on surface of microspheres (Table 1). Formed microspheres were dried at 50°C under vacuum [8].

10 mg Olanzepine microsphere was crushed and added to 100 ml of phosphate buffer pH 6.8. After 30 minutes the solution was filtered and from 10 ml solution 1 ml solution was withdrawn diluted up to 10 ml with phosphate buffer pH 6.8 (10 μg/ml). This solution concentration for the drug content of formulations were calculated using calibrated standard curve equation y =0.26418 x+0.018.The drug content was determined at λmax 227 nm by UV-spectrophotometer against blank.

50 mg microspheres were powdered and suspended in 50 ml of 0.1 N Hcl followed by 30 min. sonication. The solution was kept undisturbed for 24 hours; and filtered. The filtrate recovered was examined spectrophotometrically at 227 nm.

The Drug Entrapment Efficiency was calculated using the following formula:

10 mg of the sample and 400 mg of KBr were taken in a mortar and triturated. A small amount of triturated sample was taken into a pellet maker and was compressed at 10 kg/cm2 using a hydraulic press. The pellets was kept onto the sample holder and scanned from 4000 cm-1 to 400 cm-1 in SHIMADZU FTIR Spectrophotometer [10].

Study was carried out to check compatibility between drug and polymer in microsphere form. Samples of 5 mg was placed in aluminum pans (Al-Crucibles, 40 μl) and sealed. The heating was carried out between The thermograms were recorded over a temperature range of 50°C to 250°C for calibration of instrument at rate of 10°C/min under nitrogen purge gas at 50 ml/minute and samples were analyzed. 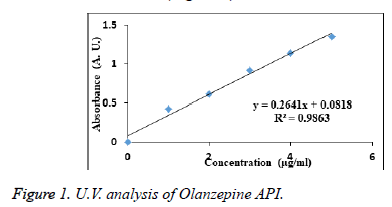 X-ray diffractogram of the drug and drug loaded microspheres were recorded by a diffractogram (Brucker AXS D8) using Cu line as a source of radiation which was operated at the voltage 40 KV and the current 40 mA. All samples were measured in the 2θ angle range between 5°C–60°C [11-13].

The mucoadhesive properties of the microspheres were evaluated by in vitro wash-off test. A 1-cm by 1-cm piece of rat mucosa was tied onto a glass slide (3-inch by 1- inch) using thread. Microspheres were spread onto the wet, rinsed, tissue specimen, and the prepared slide was hung onto one of the groves of a USP tablet disintegrating test apparatus. The disintegrating test apparatus was operated such that the tissue specimen was given regular up and down [14].

The release rate of Olanzepine from Olanzepine microspheres was determined using USP Type I dissolution test apparatus. The dissolution test was performed using 900 ml of 0.1 N Hydrochloric acids, at 37 ± 0.5°C and a rotation speed of 50 rpm. In specified time intervals and aliquot of 5 ml samples of the solution were withdrawn from the dissolution apparatus with replacement of fresh fluid to dissolution medium. The samples were filtered through filter of 0.45 μm. The samples were analyzed at 227 nm for drug content using UV spectrophotometer [15].

The protocol of the present study was approved by IAEC (proposal number RDCOP/ IAEC/ Approval / 2016 – 17/ 02 dated 8.8.2016). In vivo antidepressant activity was carried out using healthy Wistar albino rats and mice of either sex weighing 150 gm. to 250 gm. were used. To carry out study animals were divided in three groups as control, pure drug treated and microsphere formulation treated. The animals were provided with housing in polypropylene artificial lighting to stimulate day night cycle and access to food and water ad libitum. Following test performed to accessing antidepressant efficacy.

Forced swim test: Forced swim tests are conducted by placing rats individually in large glass cylinders (45 × 20 cm) containing water approximately 30 cm deep. The water should be at a height such that the rat cannot escape or touch the bottom of the beaker. On day one, the rat is placed in the cylinder for 15 minutes followed by a second 5 minutes test 24 hours later. Latency to float and amount of time spent struggling are measured.

Tail suspension test: This is a behavioral test useful in the screening of potential of antidepressant drugs. Mice are suspended by their tails with tape, in such a position that it cannot escape or hold on to nearby surfaces. During this test, typically six minutes in duration, the resulting escape oriented behaviors are quantified [16,17].

Study carried out for Olanzapine formulation as per ICH guidelines. The best mucoadhesive microspheres formulation was sealed in high-density polyethylene bottles and stored at 40 ± 2°C/75 ± 5% relative humidity (RH) for 90 days. The samples were evaluated for entrapment efficiency and percentage mucoadhesion for every 1 month to 3 months. At the intervals of each sample were withdrawn and tested. 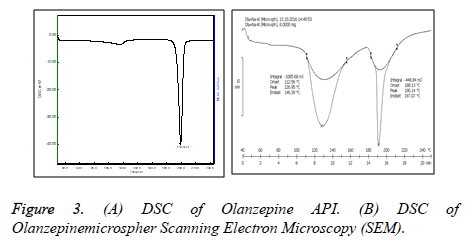 The surface of the Olanzepine microspheres was rough due to a higher concentration of polymers and uniformly dispersed of drug molecular level in matrices (Figure 4). 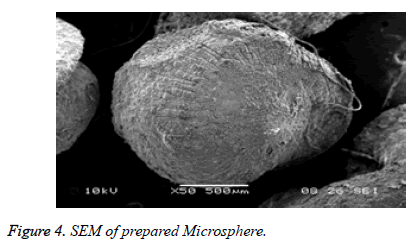 The XRD of Olanzepine showed sharp peaks depicting a typical crystalline pattern. However Olanzapine loaded mucoadhesive microspheres showed less intense peaks, revealing that some amount of Olanzapine was changed to amorphous form. Thus it can be concluded that the polymorph of the pure drug was the same as that of drug polymorph incorporated in microsphere (Figure 5).

From data it was observed that increase in the molecular weight of the mucoadhesive polymers increases the drug entrapment efficacy due to increase in the viscosity of the polymeric solution (Figure 6). Greater availability of binding sites in the network of polymeric chains a higher amount of drug entrapped (Table 2). 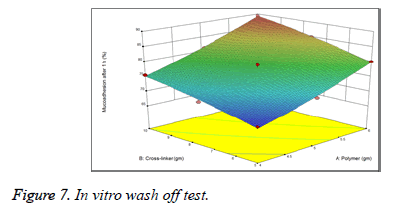 Figure 7: In vitro wash off test.

In vivo efficiency of the prepared batch was performed in healthy normal Wistar rats by measuring the antidepressant effect produced after oral administration. The 72 mg Olanzepine microsphere equivalent to 5 mg of drug was administered and used for the study.

Effect of acute treatments of Olanzepine API and Olanzepine – Carbapol and sodium alginate microsperes in FST: Animals from group I (normal), submitted to a 5 min FST in second session after 24 h of first habituation session on day 1, showed increased duration of immobility and decreased swimming duration. (Table 5 and Figure 9), indicating induction of depression like state in animals. Animals from group II (Olanzepine); group III (Carbapol and sodium alginate ) showed significant decrease in duration of immobility and increase in swimming duration on day 1 as compared to group I (normal). However, effectiveness of Carbapol microsperes was more than the API olanzapine (Table 6 and Figure 10). In FST., the duration of swimming of animals in treatment groups are increased as compared to the animals in normal group animal. The immobility time was significantly reduced in all treatment animals and an improved activity was seen in the animals treated with microsphere formulation. 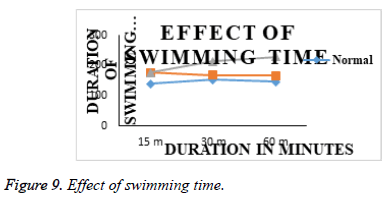 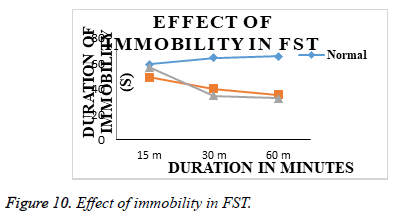 Figure 10: Effect of immobility in FST.

Duration of immobility of animals from group I (normal), submitted to a 6 min TST on day 1, was increased (Figure 10), indicating induction of depression like state in animals.

In forced swim test, the duration of swimming of animals in treatment groups are increased as compared to the animals in normal group (Table 7).

Pre-formulation studies of microsphere such as determination of ƛ max (UV), Identification study (FTIR), thermal studies (DSC), XRD were carried out to check purity, quality of drugs used and confirm cross linking between drug and polymer. The drug-excipients compatibility study were carried out by using FTIR in order to check compatibility and found that components of the formulation were compatible with each other as there was no significant changes in IR spectra for various physical mixtures. The baseline in the DSC thermogram was observed with absence of any exothermic peak. The absence of exothermic peaks clearly indicates the stability of the mixture.

The prepared microsphere of Olanzapine was found to show good drug entrapment, percent mucoadhesion, in vitro release and in vivo release. The responses observed for all the formulations prepared were fitted to various models using Design- Expert® software. Advanced study such as morphology by SEM was found to show good results. Analysis of experimental results was done by using the Design Expert to optimize formulation of microsphere.

In vivo efficiency of the best found formulation of Olanzapine prepared by using Carbopol polymer was performed on healthy normal wistar albino rats by measuring the antidepressant effect produced after oral administration. When Olanzapine microsphere administered, the duration of swimming of animals in treatment groups are increased as compared to the animals in normal group and immobility time was significantly reduced in all treatment animals and an improved activity was seen in the animals treated with combination of carbopol and sod. alginate formulation. 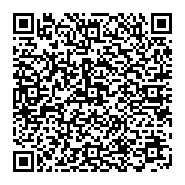