Cardiac involvement is very common in Systemic Lupus Erythematosus (SLE), and some 30%-50% of patients suffer from some form of heart disease. Conduction defects represent a rare manifestation of SLE cardiac involvement in adults. We reported a rare case of first-degree atrioventricular block associated with SLE in a 15-year-old female. The patient was diagnosed with SLE, fulfilling the 1982 American College of Rheumatology (ACR) criteria, with malar rash, pericarditis, lymphopenia, thrombocytopenia and the presence of anti-DNA antibodies with positive ANA. The first-degree atrioventricular block was attributed to SLE and completely resolved within 3 days of corticosteroid therapy.

Systemic Lupus Erythematosus (SLE) can affect any organ system. The heart is one of the most frequently affected organs in SLE. The cardiac involvement may be diffuse, or localized to the pericardium, the myocardium, the endocardium, the conduction system, or the coronary arteries [1]. In adults, conduction defects represent a rare manifestation of SLE and have hardly been described. We reported a rare case of firstdegree Atrio-ventricular block associated with SLE in a 15- year-old female who initially consulted a dermatologist for rash.

A 15-year-old female patient was referred from a dermatologist to our internal medicine department for rash and pancytopenia. She had intermittent asthma but no other medical history. She complained of progressive fatigue, photosensitivity, hair loss, arthralgias of the knees and rash three weeks before her admission. Her physical examination revealed an afebrile patient with a blood pressure of 120/60 mm Hg. Her pulse rate was 100 beat/minutes, and her respiratory rate was 16/minutes. She had butterfly wings erythema, erythematous maculopapular lesions in the upper part of the thorax (Figure 1). 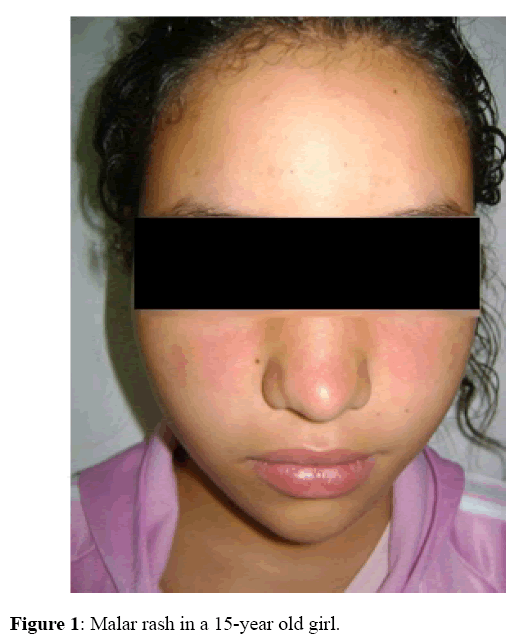 Her lungs were clear to auscultation. The heart sounds were normal with no gallops, murmur or rub. Abdominal musculoskeletal and neurological examinations were unremarkable. The remaining physical examination was normal. Routine screening Electrocardiogram (ECG) revealed sinus rhythm at 100 beat/min with significant first-degree atrio- Ventricular block (AVB) the PR interval was 280 ms. there were no QRS, ST-T abnormalities (Figure 2). 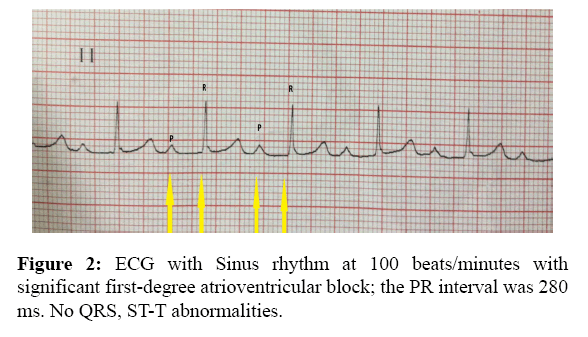 Table 1: Summary of the results of laboratory investigations in our 15-year-old female patient with first.

Summarizes the results of laboratory investigations in our patient; the patient was diagnosed with SLE, fulfilling the 1982 American College of Rheumatology (ACR) criteria, with malar rash, pericarditis, lymphopenia, thrombocytopenia and the presence of anti-DNA antibodies with positive ANA. The SLE disease activity index (SLEDAI) score was 7, indicating a moderate disease activity. In our patient, the first-degree atrioventricular block was attributed to SLE. The patient was started on intravenous methyl prednisolone 1 g/day for 3 days and later changed over to oral prednisone 1 mg/kg/day. The first-degree AVB resolved completely within 3 days of therapy She experienced concurrent improvement of fatigue, arthralgias, rash, leukopenia and thrombocytopenia (Figure 3) [1].

Cardiac involvement is very common in SLE. Prevalence of cardiac involvement in SLE varies according to whether a clinical or pathologic series is being considered. Overall, the prevalence of cardiac involvement in SLE is estimated to be more than 50% [2]. In our department, 28% of SLE patients presented cardiac involvement at some stage of their illness [3]. Conduction defects in SLE are well described in the literature [4]. While congenital heart block is the most widely known and occurs in 1%-2% of anti-Ro/SSA antibody-positive pregnancies [5], conduction troubles are very rare in adults [6]. Several types of cardiac conduction abnormalities have been described in SLE. Commonly reported conduction disturbances include AVB, such as first- and second degree blocks; and intraventricular conduction defects such as bundle branch blocks [7]. Complete or third-degree heart block was also reported [6-8]. These abnormalities tend to occur later in the course of SLE with an average of 3-20 years of established lupus. Occasionally, conduction defects may occur as the initial manifestation of SLE [4-9]. Our patient presented a first degree block in her first SLE flare. In general, derangement of the cardiac conduction system in SLE more commonly affects the young and the middle-age females [6]. Conduction disturbances in SLE have been attributed to several causes. In fact, it may result from myocarditis or pericarditis or can develop as a consequence of coronary ischemia secondary to vasculitis and atherosclerotic involvement [4-10]. Collagen deposits may accumulate within the atrioventricular node, resulting in focal degeneration and fibrosis of the conduction system [11]. Some authors suggest that anti-Ro⁄SSA antibodies may trigger rhythm disturbances through an inhibiting crossreaction with several cardiac ionic channels [12,13]. These abnormalities also may be an adverse effect of the medications commonly used by such patients. Chloroquine is associated with a high incidence of cardiac conduction disorders, including bundle-branch blocks and incomplete or complete AVB. Hydroxychloroquine was safer than chloroquine in terms of heart conduction disorders [14]. In SLE patients with conduction abnormalities, electrolyte balance and thyroid hormonal status should also be investigated [1]. In our case there was no myocarditis, electrolyte disturbances or dysthyroidism. Anti-Ro SSA antibodies were negative for our patient. First degree block in our patient preceded the use of hydroxyl chloroquine. No randomized controlled trials have been conducted to assess the proper management of SLE patients with cardiac conduction disturbances. In some cases, such as patients with lupus flare and atrio-ventricular conduction disturbances, treatment with intravenous corticosteroid has been successful [15-17]. Permanent pacemakers have also been implanted in some patients with high degree atrioventricular block [18]. In our case first-degree atrioventricular block completely resolved within 3 days of corticosteroid therapy.

We reported a rare case of first-degree AVB associated with SLE in a 15-year-old female completely resolved within 3 days of corticosteroid therapy. AVB is a rare manifestation poorly described in SLE. Patients with SLE should be screened routinely for conduction defects, even if they are asymptomatic and when AVB is present, an etiological investigation should be made.