Brugada Syndrome (BrS) is an autosomal dominant genetic disease determined by abnormal electrocardiographic (ECG) pattern and causes increased risk of sudden cardiac death. It is characterised by coved-type ST segment elevation in precordial leads V1-V3. There had been many proposed mechanisms explaining the link of sodium channel mutations and its electrophysiology. There are various triggering factors like fever, hypokalemia, ischemia, cocaine abuse and medications which unmask the ECG changes and these changes are usually transient. There is increased possibility of this cardiac rhythm to deteriorate into life threatening arrhythmias. Thus it is essential for the clinician to be aware of the conditions. We present such a scenario in which hyperthermia unmasked our patient’s Brugada syndrome.

There are numerous causes of sudden cardiac death, with Brugada syndrome being one among them [1]. BrS is an autosomal dominant inherited heart rhythm that is characterised by EKG changes and leads to dreadful arrhythmias [2]. It was first mentioned as a clinical entity in 1992 [1]. The diagnosis is made characteristic cove shaped ST segment elevation in leads V1 to V3 and presence of an atypical right bundle branch block (RBBB) pattern. It is confirmed by these ECG findings after ruling out structural heart disease, electrolyte disturbances or ischemia [3]. BrS is accountable as leading cause of death in subjects under the age of 40 years, 4% of all sudden deaths and 20% of sudden deaths in patients without structural heart disease [4,5]. Family history plays an important role in about 20-30% of BrS patients. The prevalence of the disease is estimated to be 1 in 2000 in general population [4-6]. It is also called as Sudden Unexplained Death Syndrome (SUDS) or Sudden Unexplained Nocturnal Death Syndrome (SUNDS) [7]. The most common presentations of BrS is syncope or resuscitated sudden death in the third or fourth decade of life due to polymorphic ventricular tachycardia (VT) or ventricular fibrillation (VF) [8]. The mean age of sudden death is 41 ± 15 years [9,10]. There are numerous factors that induce BrS like hypothermia, fever, ischemia, hypokalemia and cocaine abuse. Out of these factors, literature reported a huge number of cases unmasked by fever in last decades. Fever has been suggested as a trigger of malignant ventricular arrhythmias [11]. We present a case of 53-year-old woman with Brugada type ECG that appeared with a febrile episode on the day of admission due to sepsis. Efficient control of temperature in the patient resolved the ST-segment elevation and therefore, prevented life-threatening arrhythmias.

A 53 year old hispanic female came to our emergency department (ED) with fever and right hip pain for 3 days duration. She visited another ED a week earlier to the presentation for similar complaints. She had right total hip replacement 2 weeks prior to the presentation. The ED physician saw her and attributed the symptoms to postoperative infection and gave her antibiotics. After completion of the antibiotic course she visited our ED due to recurrence of symptoms. Her medical history is notable for hypertension and dyslipidaemia. Her family history was significant for hypertension, diabetes, sudden cardiac deaths of her 2 brothers, mother and aunt.

Her vitals on presentation were, temporal temperature of 39*C, tachycardia 102 bpm with a blood pressure of 128/60 mm Hg and respiratory rate of 18. Her physical exam was positive for right hip swelling and tenderness.

Laboratory data was notable for leukocytosis without bands. She was admitted for sepsis from right hip infection. Blood cultures were drawn and she was started on antibiotics. Within few hours, she complained of increasing chills and sweating, repeat temporal temperature showed 40*C. She was on telemetry bed and tele showed abnormal findings at this point. An ECG was obtained that showed sinus tachycardia at 105 bpm with 3mm ST segment elevation in leads V1 V2 and V3 (more pronounced in V2), these findings are characteristic of the Brugada ECG pattern (Figure 1). Considering the possibility of acute coronary syndrome, the patient was given 325 mg of aspirin and transferred to Coronary Care Unit (CCU). Repeat blood work was notable for leukocytosis and troponin I of 0.049 ng/ml (normal reference range is 0.0-0.5 ng/ml). She had an emergent cardiac catheterization which showed normal coronaries and left ventricular systolic function. Repeat ECGs during febrile period showed same precordial coved ST segment elevation changes. Telemetry revealed no significant events like ventricular fibrillation (VF) or polymorphic ventricular tachycardia (VT). 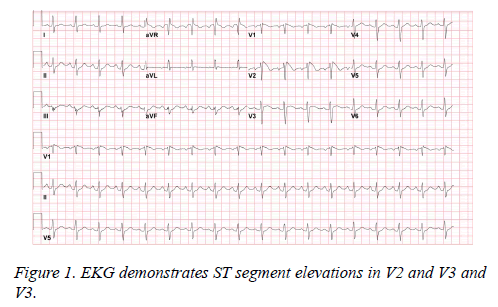 After 48 hours of careful monitoring and intravenous antibiotics, she was no longer febrile and showed significant clinical improvement. A repeat ECG during the afebrile period demonstrated complete reversal of ST-segment elevation (classic Brugada changes). (Figure 2). 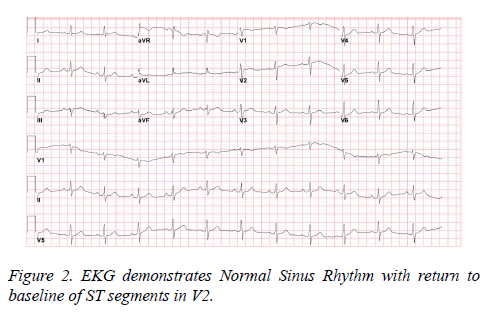 Due to strong family history of sudden cardiac deaths and syncopal episodes in the past, the patient underwent implantable cardioverter defibrillator (ICD) placement. The patient was discharged on the fifth day with the knowledge about the condition. Her clinical condition and ECG at 4 weeks and 3 months follow up was unremarkable.

BrS is a genetic inherited disease that is characterised by abnormal electrocardiogram (ECG) findings and has accelerated risk of sudden cardiac death due to ventricular arrhythmias [1]. It was earlier called as sudden unexplained death syndrome (SUDS) [12].

Though in 1989, ECG changes of BrS were first reported among survivors of cardiac arrest, it was recognized as clinical entity causing life threatening arrhythmias by Brugada brothers is 1992 [1].

The ECG patterns described in Brugada syndrome are Type 1(coved pattern) which presents as ST-segment elevation of ≥ 2 mm (0.2 mV), followed by a symmetric negative T wave in the right precordial leads. Type 2 (saddle-back pattern) begins with a positive wave called rI , which is ≥ 2 mm (0.2 mV) from the isoelectric line, followed by a minimum ST elevation ≥0.5 mm (0.05 mV) with a positive/flat T wave in V2 and a variable T wave in V1. Our patient had type I changes in the ECG [13]. It is a fixed channelopathy which can be unmasked by various triggers like cocaine, medications, electrolyte imbalances and fever [14]. Here, we presented a female patient in whom the type I Brugada changes were revealed by fever from sepsis.

The term fever-induced BrS is used to describe clinical and ECG characteristics that are revealed during febrile states in susceptible individuals. It is widely known to literature and among them two studies have showed fever can cause BrS. In a single center retrospective study done by Amin et al [15], it was noted that fever had triggered to cause BrS-type ECG changes and was seen in 18% of cases of cardiac arrest. In another study by Adler et al [16], it was found that type 1 BrS ECG pattern was 20 times more likely to happen in hyperthermia patients than normothermic patients.

To explain the mechanism, many expression studies have been conducted. One among them was by Dumaine et al [17], which proposed that mutant cardiac sodium channels established impairment of these defective channels at higher temperature, which aggravates the loss of function.

The management of BrS is a debatable topic. The Class I recommendation on Implantable Cardioverter Defibrillator (ICD) placement as per second consensus report of 2005 [2] is implantation who have survived cardiac arrest in BrS patients. Class IIA recommends placemen in patients with history of syncope and documented ventricular arrhythmia. When there are associated supraventricular arrhythmias it is advised to have electrophysiology study [18]. Drugs like Quinidine has shown some efficacy in BrS, as it reverse the ECG changes, decrease the ventricular fibrillation induction and attenuate the ventricular tachycardia [19]. However, its effect on clinical outcomes is questionable.

In asymptomatic BrS individuals ICD implantation is known to have high complications related to procedure and hence not recommended [20].

Having a strong family history will not translate into increased risk in family members. In our patient as the ECG changes have been revealed by febrile state, due to loss of function of mutant sodium channels, it is utmost important to aggressively treat the fever with antipyretics and cold sponges.

The complete reversal of these changes with decrease in temperature confirms the diagnosis of fever induced BrS.

The important learning from the case is to avoid trigger factors like hypokalaemia, drugs that can cause Brugada-like changes on the ECG like Class I antiarrhythmic drugs like flecainide, beta blockers, tricyclic and tetracyclic antidepressants, phenothiazines and SSRI like fluoxetine, anaesthetic agents such as bupivacaine, procaine and propofol, alcohol and cocaine intoxication [21].