Expressions of Eosinophil in Chronic Rhinosinusitis Patients with Nasal Polyp

Chronic rhinosinusitis represents an inflammatory condition of the nose and paranasal sinus(es), characterized by two or more symptoms, which one should be obstruction or nasal congestion or nasal secretion (anterior or posterior rhinorrhea), with or without facial pain or facial pressure feeling, with or without reduction or loss of smell, symptoms lasting more than 12 weeks and confirmed by endoscopy and/or radiographic imaging [1]. In Dr. Sardjito Hospital during the years 2000-2006 the frequency of chronic rhinosinusitis about 2.5-4.6% of all clinic visit [2]. In 2006-2007 the chronic rhinosinusitis patient get 118 (42%) of the all rhinology patients [3].

The pattern of inflammatory cells which involved in the processes and the inflammatory cells response are different between chronic rhinosinusitis with nasal polyps and without nasal polyps can clarify the pharmacological management needs. Implications for histopatologic profile are including the macrolide therapy selection for neutrophilic chronic rhinosinusitis to provide Interleukin 8 (IL8)-modifying antineutrophilic activities. Local corticosteroid therapy and the use of aggressive or oral corticosteroids for the significant eosinophils findings [5]. The right pharmacological therapy as effective as the surgical therapy, by knowing the presentation of inflammatory cell involved can help in the selection of the right pharmacological therapy [6].

Material used were patient’s sinonasal tissues who have undergone endoscopic surgery. Sinonasal tissue samples were stained using Hematoksilin-Eosin and fixed using formaldehyde 10%. This was a descriptive observasional study which involved chronic rhinosinusitis patients in Otolaringology Clinic of Dr. Sardjito Hospital. The sampling method is using a total sampling. The samples were limited registered during the year 2013.

Inclusion criteria’s in this research were patients of chronic rhinosinusitis, men or women at any age, chronic rhinosinusitis patients who undergone endoscopic procedures and signed informed consent. Patients with sinonasal malignancy and leukocytes malignancy were excluded. The material were patient’s sinonasal tissue, observed under the light microscope and calculated at five high power field (HPF) 400 X magnification consecutively. Data’s about the polyp or nonpolyp were obtained from endoscopic finding that are recorded on the patient's medical record.

The datas that have been obtained from the data collection process are presented in the tables and then processed using the SPSS program 10 for Windows® Operating Systems. Analysis of univariate data was performed to find out the frequency distribution of the variable. 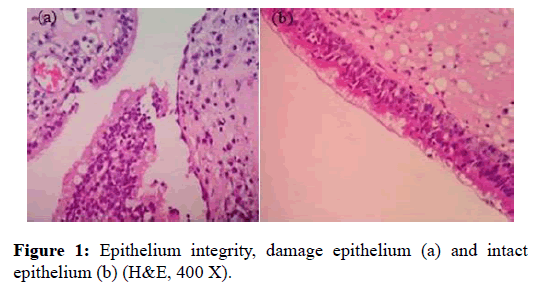 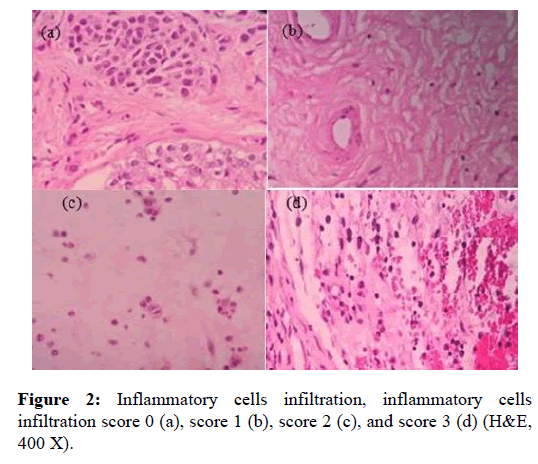 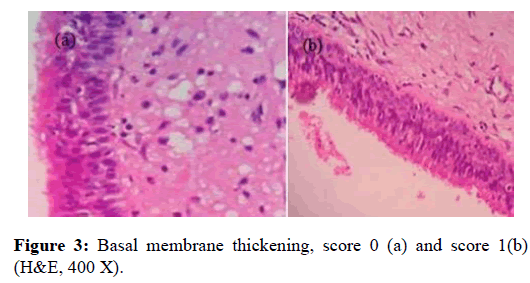 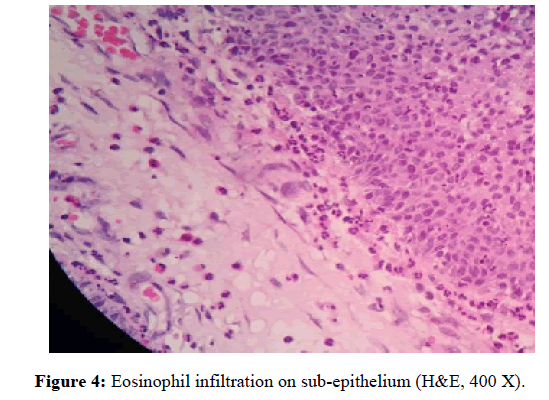 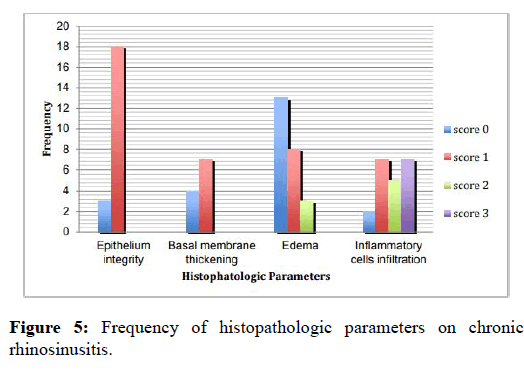 The observation and the histological analysis in the study were conducted on the basis of the results of the endoscopy surgery and there was not any data conducted from the use of prior drugs. The surgery procedure was carried out if pharmacological management did not give good result.

There were 10 preparations of the 21 preparations observed and were indicating eosinophil infiltration. However, there were only 2 preparations indicating tissue eosinophil of more than 5 cells per HPF. It was considered as eosinophilic if the tissue eosinophil contained more than 5 cells per HPF.7 The studies by Couto et. al. [9] suggested that they did not get any chronic rhinosinutis feature with eosinophilic polyp. It might be because the patients were using both local and systemic corticosteroid during biopsy. The use of topical corticosteroid caused the decrease in the number of tissue inflammation cells. Davidsson and Hellquist [10], analyzed 95 patients and classified nasal polyp histology into four: 1) eosinophilic type (86.3%), 2) fibroinflammatory polyp (7.3%), 3) hyperplasia seromucin glands (5.3%), and 4) stromal atypia polyp 1.1%). The study was not consistent with the aforementioned studies and it might be because the sinonasal polyp histopathology type in Asia and Indonesia was dominated by neutrophilic type and it difference from that found in Europe that was dominated by eosinophilic type [11,12].

Based on the results of the histopathological analysis it was found that there were 18 sinonasal tissue preparations indicate the non-intact epithelium with chronic rhinosinusitis with polyp. It was consistent with the hypothesis put forward by Kirtstreeskul [13], that the rupture of epithelial mucosa was caused by allergy or infection and it caused lamina propria prolaps of the mucosa that subsequently triggered the formation of polyp. Additionally, the erosion and the damage of the epithelial membrane could explain the exacerbation of acute bacteria of the patients with chronic rhinosinusitis. The damaged epithelium could give colony bacteria site to invade sinonasal tissue and caused infection.10 Additionally, the damaged epithelium might also be caused by specimen sampling procedure that pathologists were required to make sure that the damage was caused by inflammation or artifact during specimen sampling. The results of the study by Ponikou et. al. with 22 samples showed that basal membrane thickening took place to all of the patients with chronic rhinosinusitis. There were 17 of 21 sinonasal tissue preparations indicate the basal membrane thickening. The basal membrane consisted of basal lamina and reticular lamina that contained reticular fiber. The basal membrane thickening was essentially the thickening of the reticular lamina. As in as asthma, there was deposition of types I, III, and IV collagen taking place in chronic rhinosinusitis and there was extracellular matrix such as fibronectin, laminin, and other non-collagenous substances under epithelium that degraded as a result of chronic inflammation. The collagen deposition might be caused by synthesis and degradation imbalance. The process was regulated by matrix metalloproteinase-9 (MMP-9) and its inhibitor, and tissue inhibitor of matrix metalloproteinase-1 (TIMP-1). Overexpression of the TIMP-1 would result in the deposition of the extracellular matrix and basal membrane thickening by inhibiting the degradation of the extracellular matrix [14].

Based on the results of the study by Kakoi and Hiraide in Cauto et. al. polyp was classified into edematous polyp (60%), cystic and glandular polyp (27%), and fibrous polyp (13%). The results of the study were not consistent with the aforementioned study, where it was found that there were 8 preparations (40%) representing edematous polyp, 11 preparations (55%) representing fibrous polyp (i.e., fibroinflammatory polyp), and a preparation diagnosed to be polyp that clinically did not show any polyp histology. More than a pattern of histological features found in a single sinonasal polyp such as edematous and also fibrosis so that it was necessary to observe the most dominant pattern in establishing whether the polyp was of edematous type or fibroinflammatory type.

The appearance of the stromatous edema histopathology was spaced stroma resulting from the presence of edema. The edema in chronic rhinosinusitis was caused by the pathomechanism of the disease involving mediators that resulted in the increase in vascular permeability so that there was a big quantity of liquid came into the stroma area and finally caused edema. Additionally, the edema taking place in the chronic rhinosinusitis was caused by the presence of disorder in T-reg resulting in transforming growth factor (TGF-1) expression. The decrease in the TGF-1 caused the decrease in tissue inhibitor of matrix of metalloproteinase (TIMP-1) and the increase in matrix of metalloproteinase (MMP-9) that could cause destruction of extracellular matrix and also edema. In short, it might mean that the decrease in the TGF-1 was interpreted as the decrese in the ability to improve tissues as reflected in the distantly spaced binding tissues, edematous appearance and inflammation cell infiltration [15]. Fifty five percent of the preparation in the study showed that fibrosis was more dominant than edema.

We would like to thank the director Dr. Sardjito hospital who has given permission to conduct this study. Acknowledgements also go to Dr. Dewiyani Indah Widasari, SpPA., PhD who have given valuable input in this study. The author also expressed gratitude to the patients who have been willing to participate as research subjects and to all those who have given support to this study.