Effect on coupling synchronization of Morris-Lecar neurons under time-delay.

The nervous system is an organ system which is composed of a network of neurons, a kind of specialized cell. The nervous system can sense the external stimuli. Time-delay is time delay, and its appearance triggers more complex nonlinear dynamic characteristics, so the influence of time delay on nonlinear dynamical behavior of the coupled neuron system has attracted more attention. With the deepening of research, neural networks such as time-delay Hopfield neural network [1], delayed bidirectional associative memory neural network [2], time-delay cellular neural network and time-delay Cohen-Grossberg [3] are put forward successively. The neural coupling system with time delay function also attracts a large number of experts and scholars at home and abroad to study and explore, and many meaningful results have been achieved [4,5]. This paper introduces the neuron model and related knowledge, introduces the related biological knowledge of the nervous system and the related techniques used in this paper. This paper establishes a Morris-Lecar chaotic neuron model with two neuronal electrical synapse couplings makes a dynamic analysis of the Morris- Lecar neuron model by numerical simulation and simulation and studies the effect of the electric synaptic coupling intensity of Morris-Lecar neuron model on the generation and release of electrical activity and synchronization of the system.

In this paper, the synchronization behavior of two neuron systems with time-delayed electrical synapse coupling is established. The dynamical behavior of the system is described by the following time-delayed differential equations:

represent the steadystate values of the open probability of the Ca2+ and k+ channels respectively.

First, we study the synchronization of the neuron system without time-delay. Let t D = 0.001, (V1 ,V2 ) , and the phase plane portrait of the two electric synapse coupled ML neurons on the (V1 ,V2 ) plane can be obtained by the differential equation, which is shown as Figure 1. 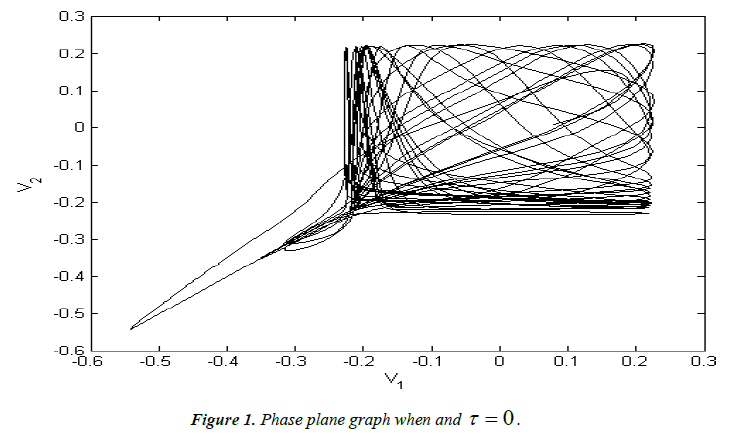 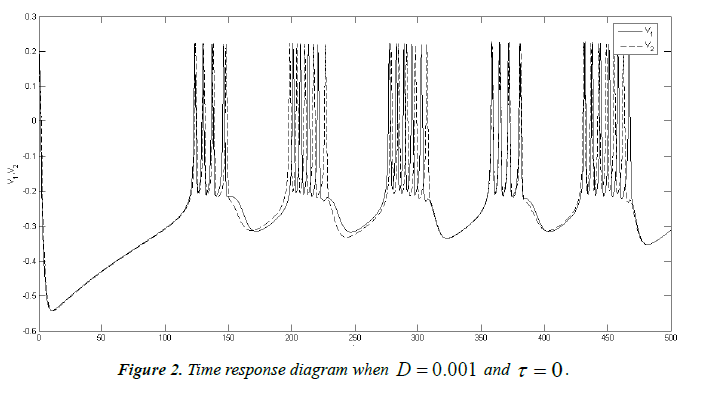 This paper studies the synergistic enhancement of electrical synaptic-coupled Morris-Lecar neuron system with timedelay. The results show that the appropriate time delay can enhance the occurrence of electrical synapse coupling neurons synchronization. These study results have important implications for the further understanding of the effects of time delay on the discharge pattern of the coupled neuron system.

This work was financially supported by the Scientific Research Project of Colleges and Universities in Gansu Province (No.2016B-051).