Docking study and result conclusion of heterocyclic derivatives having urea and acyl moiety.

In the field of molecular modeling, Docking is a method which predicts the preferred orientation of one molecule to a second when bound to each other to form a stable complex. Knowledge of the preferred orientation in turn may be used to predict the strength of association or binding affinity between two molecules. In this study a series of synthesized compounds were evaluated for focusing on binding modes, potential interactions and specific binding sites. Chemically compounds bear both the moiety acyl as well as urea and their interaction by using in silico study was investigated with beta tubulin protein that interferes with the tubulin-microtubule equilibrium, crucial for cellular mitosis. In silico studies revealed that synthesized and tested compounds show 1-7 no. of interactions with amino acids of tubulin protein. Docking study was done by using Autodock, it was found that among different synthesized compound some shows the highest and best scoring pose (lowest energy) which was -2.94 Kcal/mole between N (11) and Leucine (113) and -3.09 between N (11) and Alanine (149). Compounds with amino, hydroxy, methyl, methoxy, trimethoxy and dimethoxy substitution in derivatives of acyl urea gave an idea that urea and acyl when used in combination in different synthesized compounds show good antitumor activity.

Computer-aided docking is an important tool for gaining understanding of the binding interactions between a ligand and its target receptor (mainly, a protein). Multistep docking strategies have also been employed for flexible ligand docking [1-5]. Some common docking programs that utilize such fragment-based approaches include Molegro, Auto Dock, LUDI, FlexX, Growmol, Hook, Q-fit and Surflex [6-8] (Figure 1).

Figure 1: Docking of ligand and recptor [9].

It was therefore considered of interest to synthesize a variety of cinnamic acid derivatives wherein substituted cinnamoyl chlorides were reacted with urea to obtain acyl urea’s. These new compounds possess features similar to above mentioned series of compounds and are expected to exhibit similar pattern of pharmacological activities which in this case are anti-tumor activity sedative- hypnotic, smooth muscle relaxant activities.

The structure of tubulin was obtained from the Protein Data Bank (www.pdb.org). Compound structures were built with ChemBio Draw Ultra 11.0 and their geometry optimization was performed using the MMFF94 method in the program and saved as MRV format [9,10]. The test compound were placed into binding site of tubulin molecule by import method to the reference ligand ACO201(A), MES(137), MES(148) which are selective inhibitor against tubulin The binding affinity between ligand (synthesized compounds) and enzyme (docking score) was predicted using MolDock Score, plant score using algorithm of iterated complex and mole dock optimizer [11-15] (Figures 2 and 3). 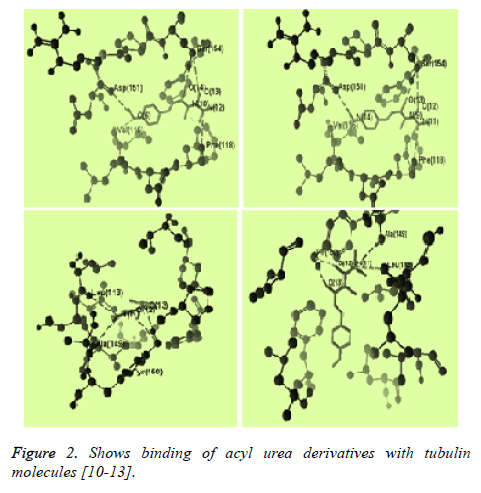 • Molecule of protein taken from protein database was imported

• Followed same step as A but only import ligand now

Again repeated step B of preparation

Results were obtained and saved

The molecular docking study of acyl urea derivatives with tubulin protein revealed that acyl urea’sx are having good interaction in favourable pose with tubulin which was explained by lowest binding energy, strong bond length and 4-6 no of interactions with active site of tubulin molecule Thus it can be concluded that some acyl urea derivatives could be used as a template for the future development through modification or derivatization to design more potent therapeutic agents. Compounds synthesized if properly changed into therapeutic agent can be used for antitumor action.

We are really thankful to the management of Noida Institute of Engineering and Technology, Greater Noida for providing facilities of research work and granting us a chance to present our work in front of you.