Distribution of dengue virus serotypes during the COVID 19 pandemic in Sri Lanka.

DENV infection is an expanding major public health burden which has rapidly spread over all WHO regions in the recent years. Many tropical and subtropical countries are profoundly affected by the DENV infection including Sri Lanka, in which it has been highly endemic in the past few decades with significant impact on health services [1].

DENV infection is caused by the DENV, a single stranded positive sense RNA virus belonging to the Family Flaviviridae. It is transmitted via the female Aedes mosquitoes, mainly Aedes aegypti and Aedes albopictus. Four distinct serotypes of the virus (DENV-1, 2, 3, and 4) have been identified with evidence of long-lasting homotypic and short-lasting heterotypic immunity following infection with a single serotype [2]. However, some studies have stated on cases of homotypic reinfections one to two years after the primary infection [3]. Re-infection with another serotype has more potential to cause severe infection due to the cross reactivity of the immune response caused against a specific serotype [4,5]. It is evident that all 4 serotypes of the virus can cause severe DENV infection, while some genotypes or clades within genotypes are linked to increased potential for clinical severity [6,7]. However, studies have shown more complicated disease to be associated with DENV-2 [8]. Further, co-infection with two different serotypes has shown to be associated with more severe infection in some studies [9].

Circulation of different DENV serotypes in a specified geographical location overtime as well as co-circulation of multiple serotypes during a single outbreak has been documented [10]. Yet, usually one serotype acts as the predominant circulating type leading to a major outbreak at one point. This leads to waning-off of immunity to the other serotypes among the population which head to another outbreak with another emerging serotype in future [11,12].

It is evident that all four serotypes of the DENV have been circulating in Sri Lanka for more than 30 years. Sri Lanka has experienced several epidemics of DENV infection in the past and the appearance of new genotypes and clades within serotypes have found to be responsible for the increase in the incidence and epidemics [13]. Thus, knowledge on the distribution of the DENV serotypes will provide important information on an impending epidemic in near future. Moreover, it is highly important to detect the re-emerging serotypes and the disease burden of DENV infection during the current COVID-19 pandemic, as the combined effect of COVID-19 and dengue epidemics will potentially result in a severe health impact [1]. The first case with COVID-19 infection in Sri Lanka was reported on the 27th of January 2020 with the detection of the virus in a foreign traveler from China. A significant impact on health services in Sri.

Lanka was experienced with the commencement of the first wave of COVID-19 infection in March, 2020 followed by the second and third waves in October, 2020 and April, 2021 respectively. Further, several correlations of Dengue virus infection with COVID-19 infection have also been identified such as similar clinical presentations, reports of co-infection and serological cross reactivity between the two viruses, leading to difficulties in the management. [14,15].

The objective of this study was to describe the incidence of DENV infection and the distribution of DENV serotypes among clinically suspected patients with DENV infection during the COVID-19 pandemic in Sri Lanka.

This laboratory based retrospective study was carried out at the National Arbovirus/Dengue Laboratory at the Medical Research Institute, Sri Lanka. The study included samples received for testing of DENV RNA from throughout the country from patients clinically suspected with DENV infection which were collected within five days of the onset of illness. Clinically suspected DEV infection was defined as presence of two or more clinical findings in a febrile patient ranging from nausea, vomiting, rash, arthralgia, myalgia, leucopenia, abdominal pain/tenderness, signs of fluid accumulation, mucosal bleeding, lethargy, restlessness and liver enlargement. Severe dengue was defined as presence of severe plasma leakage, severe bleeding or severe organ impairment in a patient with DENV infection [16]. A total of 1796 plasma samples fulfilling the above criteria received from May 2019 to April 2021 were recruited for testing for the presence of DENV RNA and the serotypes. Demographic and clinical details were recruited from the accompanying request forms.

RNA extraction from the samples was carried out using the SpinStar viral nucleic acid extraction kit (ADT Biotech, Malaysia) and was performed according to the manufacturer’s instructions. Any remaining ethanol was removed prior to amplification with an additional step of centrifugation. An elution volume of 60μl was used for testing.

Table 1. DENV viraemic rate during the quarters of the study period.

Table 2. The demographic characteristics of the DENV viraemic samples.

Table 3. The serotype distribution of DENV infection over the study period. 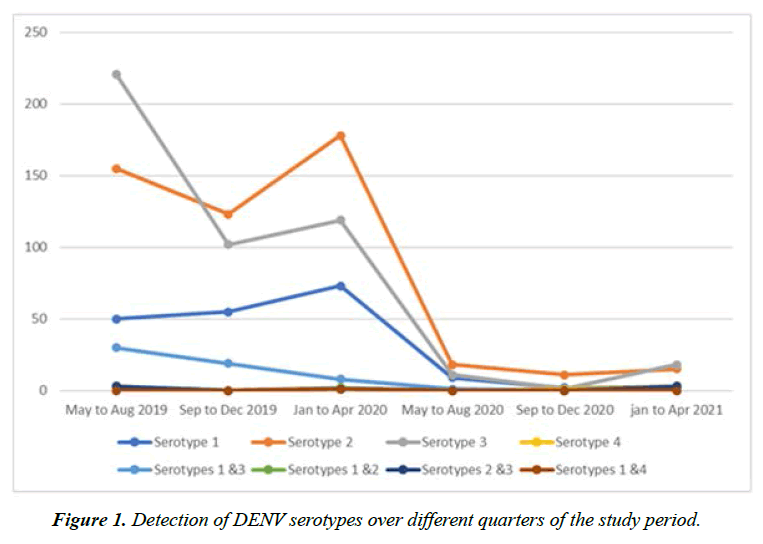 Figure 1: Detection of DENV serotypes over different quarters of the study period.

Correlation of clinical features with the DENV serotype distribution

Table 4. Correlation of clinical features with the DENV serotype distribution.

This study was conducted with the aim of detecting the incidence of DENV infection and the distribution of the DENV serotypes during the COVID-19 pandemic in Sri Lanka.

The study sample included predominantly children less than 16 years of age whereas the clinical presentations varied from non-severe to severe DENV infection. Majority of the samples were received from the Western province.

Majority of the DENV viraemic samples belonged to children less than 16 years of age. This study finding showed similarity to findings observed during a major DENV outbreak in Sri Lanka in 2017 [19]. Further, similar findings have also been observed globally owing to increased engagement in outdoor activities seen in this age group [20-23]. Features of non-severe DENV infection predominated the clinical presentation among the vireamic samples, in agreement with previous study findings in Sri Lanka as well as globally [21,24]. Majority of the viraemic samples were received from the Western province followed by the Southern province, probably indicating the impact of higher population density leading to increased incidence of infection.

Interestingly re- emergence of DENV-1 was detected in this study. DENV-1 was lastly identified as the predominating serotype in Sri Lanka in year 2013 with no documented outbreaks thereafter. Evidence indicates low level of population immunity to a given serotype in a geographical location to predispose to an epidemic in future [11,12]. Thus, the increase prevalence of DENV-1 infection detected in this study may indicate re-emergence of DENV-1 following a low population immunity owing to predominant circulation of other serotypes in the recent past in Sri Lanka. Further this finding may indicate the probability of an impending outbreak of infection with DENV-1 in near future.

The present study indicated co-circulation of DENV- 1,2 and 3 in Sri Lanka, whereas detection of DENV-4 was markedly low. In contrary studies carried out during the major outbreak in 2017 have demonstrated co-circulation of DENV- 2, 3 and 4 [19]. However, it was noted in early 2019 that DENV-2 and DENV-3 continued to be predominant, while a rise in the prevalence of DENV-1 infection was demonstrated, indicating a gradual shift in the serotype distribution.

Authors would like to acknowledge all the staff members at the Department of Virology at Medical Research Institute for their immense support. This research did not receive any specific grant from funding agencies in the public, commercial, or notfor- profit sectors.

Authors would like to declare that there are no potential conflicts of interests.