4Department of Orthopaedics, The First Hospital of Jilin University,China, The City of Changchun, China

Background: Perioperative blood loss is associated with total knee arthroplasty (TKA). The tranexamic acid (TXA) is a plasminogen activator inhibitor widely used to prevent bleeding. The Stryker CBC II ConstaVac Blood Conservation System (CBC II, Stryker) can avoid homologous blood. The purpose of this study is to compare the efficacy of intravenous and topical regimen of TXA in primary TKA, and compare the efficacy of TXA and CBC II in primary TKA. Methods: The study included 202 patients accepted primary TKA from May 2010 to May 2015. The patients were divided into four groups: 53 patients were administered intravenously with 1000 mg TXA. 54 patients in an age and gender-matched group were topical administration with 1000mg of TXA in 100 cc of saline. 49 patients in an age and gender-matched control group undergo the treatment of blood reinfusion by CBC II. Control group included 46 patients did not take TXA and CBC II. Results: Post-operative 24 h total drainage volume were lowest, and the post-operative 24 h Hgb was highest in the group administered intravenously of TXA (p<0.05). The transfusion rate, amount of red blood cell suspension and frozen plasma were lowest in the administered intravenously of TXA group (p<0.05). Here was no thromboembolic event in four groups. Conclusions: Perioperative blood loss could be reduced by intravenous and topical regimen of TXA and CBC II after TKA. In addition, the application of TXA and CBC II is not associated with increased risk of thromboembolic complications.

Perioperative blood loss is one of the most common complications during the TKA surgery with estimated blood loss between 1450 and 1790 ml [1-4]. The incidence of transfusion after TKA has been reported ranging from 11% to 67% [5,6]. Stokes et al. found the disadvantages of blood transfusion after total knee and hip arthroplasty include longer length of hospital stay, infection, increased morbidity and mortality, especially in increased costs [7]. Therefore, it is a great challenge for orthopedic surgeons to reduce blood loss in total knee arthroplasty. TXA is a plasminogen activator inhibitor which can reduce perioperative blood loss and incidence of transfusion in knee arthoplasty [8-13]. The CBC II blood conservation system (CBC II) from Stryker is a safe and simple disposable system that in favor of an economic solution for blood reinfusion. The safety and usefulness of using the Stryker CBC II after total knee arthroplasty was confirmed by some studies [14]. However, it is the controversial that comparison among the TXA and the CBC II is more effective reducing hemoglobin drop after TKA. The study was completed for comprehensive comparison of intravenous and topical application of TXA and using the CBC II in patients undergo primary total knee arthroplasty.

Materials and methods: The inclusion criteria of four groups are as follows: all patients with osteoarthritis of knee, and routine blood, blood glucose, blood lipids, blood pressure is normal, and with normal blood clotting mechanism which was conform by prothrombin time, activation of partial thrombin time, thrombin time, fibrinogen and platelet function. The average pre-operative 24 h Hgb (and standard deviation) was 125.55 ± 10.15 g/L in knees administered intravenously, 137.82 ± 11.25 g/L in knees with topical administration, 127.25 ± 10.61 g/L in CBC II knees, 142 ± 12.27 g/L in control group. More than 5 years history but not more than 10 years, preoperative three weeks to stop taking non-steroidal anti-inflammatory drugs (NSAIDs), and no history of hormone use. The ones with a history of VTE were excluded. All surgical patients are general anesthesia, the operations were performed by the same surgeon team, a thigh tourniquet pressure of 70 kPa was used after exsanguinations band and, and hours to relax for ten minutes. The prosthesis was posterior stabilized knee joint prosthesis of JNJ (Johnson & Johnson). This clinical, randomized study was performed on 202 patients who were underwent unilateral TKA in our hospital, from May 2010 to May 2015 (Table 1).

Table 1: Characteristics of patients with TXA, CBC II and controls

All statistical analyses were carried out with R version 3.1.1 so ftware (R Foundation for Statistical Computing ,Vienna, Austri a). We performed an analysis of the ANOVA Test, a value of P<0.05 was set to show statistical significance. 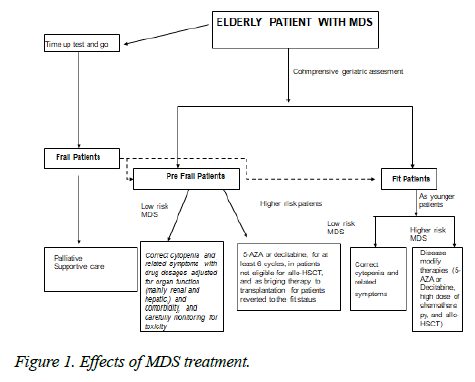 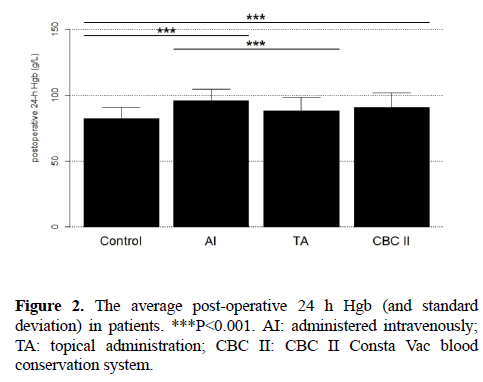 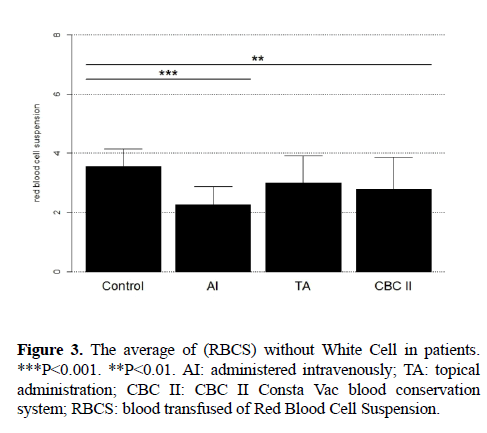 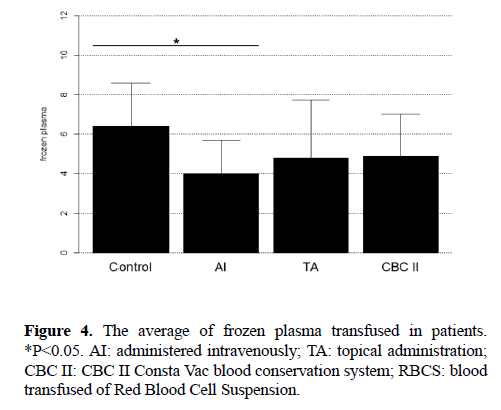 To transfer the liquid the lever needs to be depressed and the blood bag should be hung and spiked. This is a vital part of the blood conservation program. Only one disposable needs to be used per patient and it easily converts from reinfusion device to drainage reservoir. Its main components include a variable vacuum setting, an internal prefilter, a fat retention valve and a vacuum indicator. The volumetric graduations are accurate.

This study demonstrates a distinct correlation between the administration of TXA and reduces perioperative blood loss in Chinese patients. In our study, intravenous administration of TXA reduced drainage amount by 49% and irrigation of the knee joint with TXA decreased it by 35%, compared to the control group. Intravenous injection of TXA was more effective than the knee joint cavity irrigated to reduce the total drainage volume. It is no statistical differences to reduce the total drainage volume between CBC II group and control group. This study demonstrates that intravenous injection of TXA is significantly reduces the post-operative Hb drop. However, there was no difference in the joint cavity irrigated group and CBC II group of the post-operative Hb drop. There is some concern that a risk of thrombosis by TXA carries theoretically. However, to date the some studies has not shown a significant risk in the total joint arthroplasty population [34-36]. In our study, we did not found a greater risk of thromboembolic disorders with the use of TXA and CBC II. It may due to use of Low molecular weight Heparins Calcium (Nadroparin calcium). Nadroparin is an anticoagulant belonging to a class of drugs called low molecular weight heparins, which is used in orthopedic surgery to prevent deep vein thrombosis and pulmonary embolism, and as treatment for deep vein thrombosis [37].

When administrated intravenously, TXA diffuses rapidly into the synovial fluid and synovial membranes, until the concentration of the TXA in synovial fluid reaches to the concentration of serum [38,39]. Therefore, TXA preoperative must be applied within 30 minutes before using a tourniquet. The blood from the intravenous group and the irrigated group contains TXA and metabolites, it is not clear whether can induce thrombosis. The assumption we made here is as follows, the frequency of injecting blood will be reduced to the least amount, provided that the patient is treated by TXA together with CBC II re-injection. However, after intravenous or local injection of TXA, TXA breaks down during the progress of CBC II blood collection, which will increase the adverse reaction for patients. Blood clotting or other unpredictable events may happen, and it is still understudied to make any conclusions.

In conclusion, TXA may play an important role in improving the general conditions of patients undergoing TKA by decreasing blood loss and maintaining a hemodynamically stable state. Intravenous injection of TXA prevents the postoperative Hb drop much more effectively than the knee joint cavity irrigated of TXA and blood reinfusion by CBC II.