2Department of Mathematics and Statistics, The Oke-Ogun Polytechnic Saki, Nigeria

Highly proteinous food consumed by both young and old populace is fish. Large number of consumers do eat fish because of its availability, palatability, softness and biological values. The quality of nutrients in fish is a function of food and feeding habits and the resident water body. Comparative analysis of the nutritional and elemental compositions of three freshwater species of fish; T. zilli (TZ), P. senegalus (PS) and C. gariepinus (CG), collected from Igboho reservoir, Nigeria, was conducted from April- September. The biochemical study of moisture, protein, fat/lipid, ash contents and mineral elements concentrations; Fe, Na, K and Ca of fish species were carried out in the laboratory. The biochemical assay were determined using loss in weight, micro-Kjedahl, dry- ashing, solvent extraction methods and atomic absorption spectrophotometer. The average moisture contents of the fishes varied from 67.04 to 71.60 (g/100 g) with C. gariepinus having the lowest dry matter content followed by P. senegalus. The protein contents of the fishes ranged from 18.58 to 21.83 (g/100 g). The minimum and maximum protein values were observed for PS and TZ respectively. All the fresh fish types examined are rich sources of moisture, protein, fat, ash and minerals. They all belong to the high-protein (18-22%), high moisture and low-oil (<5%, except TZ) category. Hence, TZ had significant amount of fat (6.38 g/100 g) than that (1.30 and 1.20 g/100 g) of PS and CG at p<0.05. Fat content varied between species examined with significant difference (p<0.05). The pattern of elemental concentrations in fresh fish species was in well-defined decreasing order of Ca>K>Na>Fe. Generally, mineral concentrations group has major and trace elements. In which, major elements (Ca, K and Na) are significantly different (p<0.05). The three fish species are good sources of protein and mineral elements for post Covid-19 food supplements to enhance man?s immunity system.

Demand for fish has increased tremendously as a cheapest source of animal protein. Fish is highly proteinous food consumed by both young and old. Consumption of fish releases an important nutrient to a greater number of people worldwide and thus makes a very significant contribution to nutrition. However, fish has traditionally been a popular component of diets in many parts of the globe African countries inclusive where it is regarded as the major source of animal protein among rural dwellers (Adesola et al., 2011). Aquatic fin fish has an edge over meat in Nigeria, resulting in large percentage of populace consuming fish because of proteins’ food nature, its availability, and palatability and easily digestible as it contains less collagen fibre than the protein found in meat (Eyo et al., 2001); (Foran et al., 2005). Fish also serves as a favorite foodstuff for large number of people across the globe due to its several health benefits (Ali et al., 2010); (Obaroh et al., 2015); (Job et al., 2015). The principal constituents of fish are; water, protein, fat, ash and carbohydrate. Chemical composition of fish varies relatively with age, season, sex, physiology state of fish, feed intake and the environment (Silva et al., 2000).The knowledge of fish composition is essential for its optimum utilization. It has been reported that proximate composition is a good pointer of physiology required for routine analysis of fisheries (Cui et al., 2011). In addition, the body of fish contains small amount of mineral elements, some of which are essential nutrients, being components of many enzymes system, metabolic mechanisms and hence contributes to the growth of the fish.

Igboho reservoir is in Oorelope Local Government area of Oyo State, Nigeria. Morphometrical matrices showed that, the reservoir was created in 1987 by the impoundment of Koinsin River (tributary of Ogun River). The river has Ogbagba, Ayinta, Akanso and Owindin as tributaries. It has the catchment area of 248 km2. The reservoir is located in the longitude 3 o 86.7’E and 4 o 00.0’E and latitude 7 o 83.3’N and 7o 93.3’N. The surface area of the reservoir is 300 km2 , while the mean maximum depth is 10 m with total storage capacity of 1, 200, 000 m2.

The fresh fish specimens were purchased from the artisanal fishermen at different landing sites, once in a month for a period of 6 months (April-September). Immediately the fish were landed, they were purchased fresh and transported in the ice chest to the central research laboratory University of Ilorin. Fish were washed with chlorinated water, identified using the fish identification guide (Olaosebikan et al., 2013). Necessary morphometric parameters [weight (wt) in g, total length (TL) in cm] were recorded. The fish were processed; de-scaled, gutted and though roughly washed. The whole fish were packed in labelled foil bowls, kept in deep thermo cool freezer at -4oC until needed for further use/analysis.

Proximate and elemental analyses of the samples were carried out in the central research laboratory of the University of Ilorin, using the methods of A.O.A.C (2006).

The moisture content was carried out by oven drying a third of each sample in an electric oven at between 70 to 80 oC until the samples had constant or stable weight. The loss in weight was calculated as the moisture content (Fawole et al., 2007); (Victoria et al., 2015).

The fat content of each sample was determined using the modified Bligh and dyer procedure.

Data obtained for protein, fat and ash contents were corrected for moisture and presented on wet weight basis.

The results of mineral elements are varied in the values obtained significantly. All the mineral elements studied were represented in all the species analyzed. Calcium (Ca), Potassium (K), Sodium (Na) were specifically abundant in the fish analyzed in that order (Ca>K>Na) and Iron (Fe) was negligible. 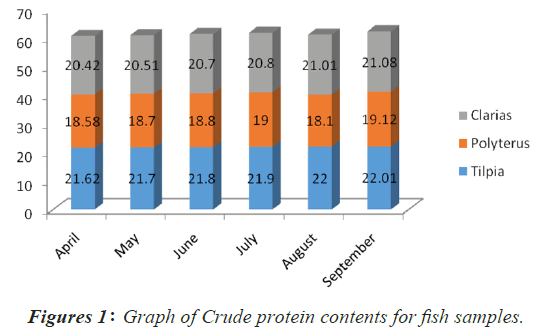 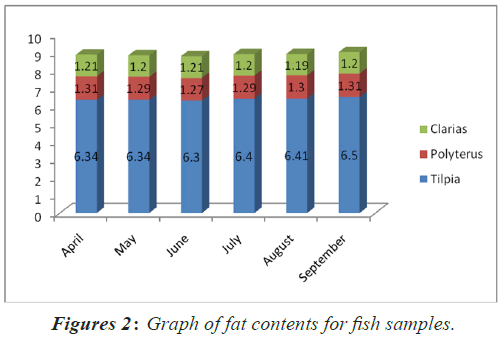 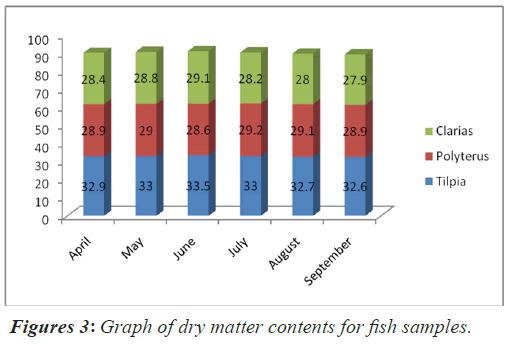 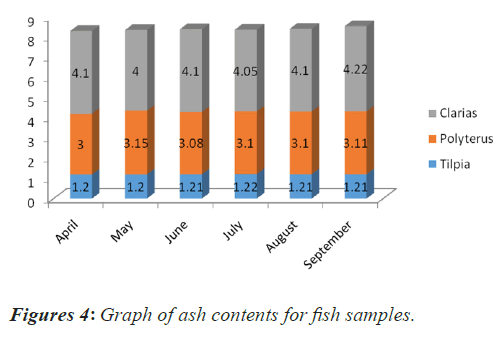 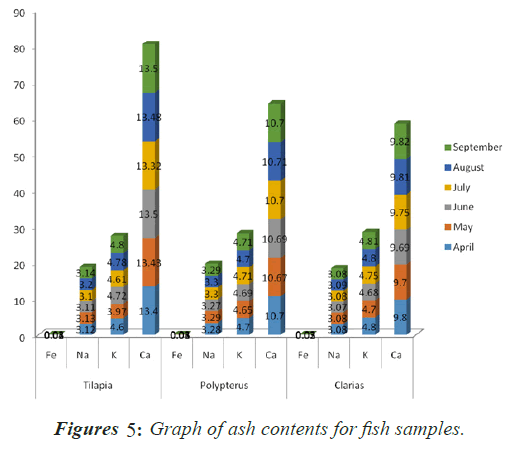 Proteins, fat (lipids) and moisture contents were the major constituents, when assessing the nutritional value of fish. The nutritional elements revealed variable values in all the fishes analyzed, with crude protein showing the highest values and ash contents recording the lowest. This makes the fish a principal candidate of good and dietary protein sources (Figure 1). This is in agreement with the findings of (Vlieg et al., 1988) as reported by (Obaroh et al., 2015) who recorded highest protein contents in fish. The protein contents in the fishes in this study ranged between 18.10 and 22.01 (g/100 g). An indication that they are high protein sources for the consumers. However, the minimum and maximum protein values are recorded for P. senegalus and T. zilli respectively. These values are relatively above those of other fishes. (Palani et al., 2014) reported that the protein content of fatty fishes landed in the Thoothukudi coast of India was 14%. According to (Ondo-Azi et al., 2013) the amount of protein in 5 species of marine fish consumed in Gabon ranged from 16% to 20%. Also, (Fawole et al., 2013) reported protein contents of 6 fresh water fishes from Oba reservoir ranged from 16.91 to 26.18%. (Adesola et al., 2011); (Adewumi et al,. 2014) discovered that the protein contents of freshwater fishes landed in Lagos and Osun inland water ranged from 17.25 to 21.36% and 16.31 to 22.44% respectively. This variations in values of protein contents may be attributed to different resident water bodies (environment).

All fish’s types were found to be low in fat content. T. zilli had significantly higher fat contents (6.38 g/200 g) than that of (1.30 g/100 g and 1.20 g/100 g) P. senegalus and C. gariepinus at P<0.05 (Table 1 and Figure 2). The variation in lipid contents among the studied species especially in T. zilli, which was significant may be connected with the fact that T. zilli do store lipid in the muscle to meet its adaptive feature of swiftness as a pelagic fish. However, the values of fat should pose health concern, rather they have curative heart diseases (Victoria et al., 2015). The values range of fat in this study (1.20 to 6.38 g/100 g) disagreed with findings of (Fawole et al., 2013) who reported the fat value ranges among 6 freshwater fishes (5.46 to 18.18 g/100 g) in which H, odoe had the highest fat contents.

Ash is a measure of the mineral content of food item. The consequential residual balance after organic matter has been burnt off. The observed range of ash content in P. senegalus and C. gariepinus (3.09-4.10%) indicates that species are a good source of minerals; Ca, K and Na. The ash value for the T. zilli (1.20%) is relatively low. These values are higher than what some authors (Baliu et al., 2007); (Narhasan et al., 2008);(Olagunju et al., 2012) have recorded for Channa striatus, Snakehead murrel and Tilapia spp respectively. However, the values for ash content in this study are lower than Ama-Abasi and Ogar (2013) reported for Parachanna obscura (7.76%). The average value of the ash contents for the three fish species is 2.80 g/100 g (Table 1). This values closely disagrees with the range of ash values (1.35-1.66%) discovered for rainbow trout by (Gokoglu et al., 2004) and widely disagree with the range of ash values (7.67 to 10.14%) obtained in 6 fishes from Oba reservoir by (Fawole et al., 2013). Thus, result closely agrees with the range of ash values (0.95–2.50 g/100 g) observed for silver catfish by Weber et al; (2008). The variations could be linked to biological factors and environment (Figures 4 and 5).

Figure 5 shows variations with time (months) in the mineral elements examined for this study. Concentrations of calcium (Ca) were observed to have significantly dominated other studied elements in all the fish samples handled. This is an indication that the resident water body (Igboho reservoir) from which fishes were collected is very rich in calcium and that must have allowed an active movement of this ion across the gill structures which is the functions of its concentration in the external medium (water). Therefore, variations recorded in the value obtained for calcium could be due to an increase in the proportion of bone to flesh as the fishes grow, this agrees with the report or submission of (Boyd et al., 1978) as echoed by (Adewoye et al., 2003). The calcium values levels recorded in all species examined followed specific pattern in decreasing order of T. zilli>P. senegalus>C. garepinus. The  high  values  of  calcium  (Ca)  observed  in species of fishes examined; T. zilli (13.44%), P.senegalus (10.70%) and C. gariepinus (9.76%) could probably be linked to the preferential accumulation and calcification of scales and hard tissues (bone). Environmental setting played significant role in the pattern of elemental concentration in each of the species in the order; Ca<K<Na<Fe, contrary to report of some researchers in other localities. (Ako et al., 2004) reported lack of well-defined decreasing order of magnitude in major elements assessed on fish species from another environment. This study agrees with (Adewumi et al., 2014) who reported well-defined decreasing order of Na<K<Ca<Mg<Fe<Mn<Cu<Zn. Minerals help the body grow, develop and stay healthy. Though it is an uncommon occurrence in aquatic systems, fish with diet deficiencies in Ca, K, Na and Fe can experience complications, reduced growth and increased mortality. The elemental concentration in fish could be determined amongst others by microbial activities in the resident water body, feeding habits and age of fish. Hence, variations in the quantification of minerals in fish examined could be due to their abundance in the external medium where they live (Fawole et al., 2013), ability of fish to utilize optimally the elements from their diets and environment and the physiological state of fish (Ako et al., 2004).

The three tropical fish species evaluated in this research are rich sources of biochemical values. This study shows that the nutritional qualities and mineralization of fish species differed and varied significantly (P<0.05) with time. Hence, iron (Fe) values for the three fish species were negligible within the six months of investigation. However, the obtained data would influence customer choice of fish based on their nutritional qualities or values besides supplementing the information on Nigerian food composition database. 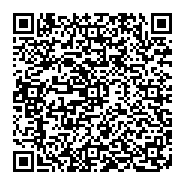