Department of Chemistry, College of Science and Technology, University of Rwanda, Kigali, Rwanda

Natural products from Datura stramonium and Phytolacca dodecandra are increasingly of interest because they are known to have an effect on a living organism. The extraction of bioactive is an essential to the sustainability of cost-effective of chemical drugs. In this work, sample expected to have bacteria was collected around KIST IV lab of University of Rwanda in College of science and technology: toilet flusher, doorknobs, inside lab and wastewater. The preliminary bacterial identification was done based on morphological and biochemical tests. The antimicrobial activity of these plants was evaluated with resistant microorganisms and antibiotic susceptibility. The utmost antimicrobial potentials were detected from hexane and ethyl acetate extracts of Datura stramonium whereas the extracts from Phytolacca dodecandra using the same solvents inhibited only the strain of S. epidermitis; the extracts from both plants didn’t show any inhibition zone on isolated bacteria. Moreover, the extracts obtained by using a combination of hexane and toluene on Datura stramonium and Phytolacca dodecandra presented greater inhibition. The present study would be a basic understanding to use for a practical purpose of Datura stramonium and Phytolacca dodecandra in pharmacological areas.

Natural products have been a key and significant substance of healthcare in fighting numerous health problems basically in people staying in rural areas, poor people residing in urban area with no of inadequate facilities to modern medicine [1-4]. The significance of these natural products structures is increasing in now days since they are traditionally practical, harmless to health when used with considerable dose however, their structures’ study and projected use to replace the modern medicine facility are both limited and costly [2,5,6].

The plants extract, either as standardized extracts or as pure compounds offer unlimited chances for new drug findings because of the matchless availability of chemical variety [7-10]. The habit of using herbal medicines in the world relies on human interactions with the surroundings. The extracts from plants used for traditional medicine comprise an extensive range of substances that can be used to treat long-lasting diseases as well as transmittable infections [11,12]. Mostly the medicaments used to treat various diseases are extracted from plants. According to the World Health Organization (WHO), an infectious disease is the first cause of death worldwide with more that 50% of the death appearing in tropical countries. In the developing countries, treatment of such diseases is complicated not only because of the occurrence of resistant microorganisms to the commonly used antibiotics, but also because of the low income of the population, which drastically reduce their accessibilities to appropriate drugs [13]. Datura stramonium and Phytolacca dodecandra (Table 1) have been used in tropical Africa to treat various infectious diseases.

Datura stramonium contains dangerous levels of tropane alkaloids atropine, hyoscyamine, and scopolamine, which are classified as deliriants, or anticholinergic; Phytolacca dodecandra in Ethiopia offers a readily available molluscicide to control schistosomiasis and it have been used as a detergent and as traditional medicine for centuries [14]; also its use was even extended for treatment of asthma and as analgesic during surgery. Datura stramonium and Phytolacca dodecandra are plants saying when inhaled to be toxic for human health but its application as antimicrobial activity is seldom investigated to increase its application especially for cleaning and treatment of human wounds. Therefore the objective of the present study is to compare the antimicrobial activity of bioactive extracts of Datura stramonium and Phytolacca dodecandra in different solvents.

Fresh leaves of the Phytolacca dodecandra and Datura stramonium were collected from fields at Kigali City (center of Rwanda) where they have freely grown. Thoroughly washed leaves were shade dried by using oven and then grinded with the help of pestle and mortar. Fifteen gram (15 g) of the powder was extracted successively with 250 ml of methanol using a Soxhlet Extractor for 48 h. All the extracts were concentrated by using rotator evaporator to remove the remaining solvent within extracts and preserved in airtight bottles until further use. All extracts were carried in the fridge. Percentage yield of extract was calculated according to Equation 1 based on dry matter content, it is the total dry mass after the evaporation of the solvent and it was calculated as follow;

Sample expected to have bacteria was collected inside of different areas of KIST IV lab of University of Rwanda in College of Science and Technology. Unknown bacteria were collected from three sites; doorknobs, toilet flusher and wastewater which are in front of the lab. Samples were collected with the aid of saline water and cottons. The saline solution was prepared by weighing nine grams (9 g) of NaCl and dissolved them in one liter of distilled water. The solution was distributed in small bottles with cotton swabs and then after, the bottles were carried to the sample site. The cottons with saline water were rubbed on doorknobs and toilet flusher while waste water was collected in bottle. These samples were cultivated on four media Nutrient Agar (NA) to generate pure colonies which were cultured on Mannitol Salt Agar (MSA); MacConkey Agar (MA) and Eosin Methylene Blue Agar (EMBA). NA is a universal media for which all kinds of bacteria growth; MA and EMBA are selective and differential media for gram negative bacteria like E. coli while MSA is a selective and differential medium for gram positive especially staphylococci species (Figure 1).

The extraction of bioactive constituents such as alkaloids, saponins, terpenoids, steroids, flavonoids, tannins was done according to with minor modifications [15]. The qualitative analysis of the alkaloids, Saponisoids, Terpenoid and Steroid, Flavonoid, Tannins was prepared according to respectively [4,16,17]. The gravimetric method was used for quantification according to where the extracts content were determined by change and calculated as a ratio of the original sample [18] (Figure 2). 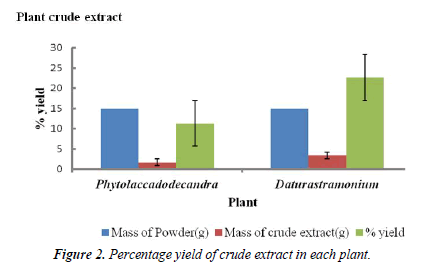 Figure 2: Percentage yield of crude extract in each plant.

30 petri dishes of nutrient Agar media was prepared and used to assess the antibacterial activity. Three cultural media such as MacConkey agar (MA), Mannitol Salt Agar (MSA) and Eosin Methylene Blue (EMB) Agar (Levine) were prepared. Different colonies were isolated and cultured on selective and differential media. After isolation process, bacteria were identified by screening them followed by biochemical tests. Biochemical tests performed were catalase, coagulase, urease, indole, and triple sugar iron. For the first essay we used known stock culture of E. coli, S. aureus and S. epidermidis and we extended our work on isolated strains from unknown bacteria to have more strains to be applied for these extracts. All of these strains were cultivated on nutrient agar to assess the antibacterial activity of D. stramonium and P. dodecandra; four extracts were obtained; 2 extracts were obtained by using a mixture of hexane and toluene on Phytolacca dodecandra and Datura stramonium while the others were obtained by using hexane and ethylacetate on Phytolacca dodecandra and Datura stramonium. The strains; Escherichia coli, Staphylococcus aureus, and Staphylococcus epidermidis were used to test the activities of extracts from Datura stramonium and Phytolacca dodecandra using 100, 50, and 25 × 103 g/l concentration.

The determination of relative percentage inhibition (RI) of the test of plants leaves extracts was calculated according to the equation below [19,20].

With gram staining technique, the shape and staining of bacteria were identified and the mostly obtained bacteria were road shaped (bacilli) which appeared purple (A) and staphylococci species which appeared pink/red (B) under microscope. The colonies picked from MSA with addition of 3% H2O2 and with bacteria that liberates O2 was indicated by the formation of bubbles. According to research findings, the obtained bacteria are identified as Staphylococci species [21,22].

The Coagulase test results indicated the presence of Escherichia, Shigella, and Salmonella species bacteria. Indole test identifies the organisms that are able to break down tryptophan by generating indole which make them indole positive. Referring to, the bacteria did not change the color of media within the test tubes which indicated that their indole tests results were negative; this was the fact that mostly Klebsiella sp., Pseudomonas spp, Salmonella sp., were expected to be present [23,24]. Two tubes showed growth with yellow slant, yellow butt, gas positive, no H2S produced, the identified bacteria are E. coli; five tubes showed growth with red slant, red butt, no gas, no H2S produced, and identified bacteria are Pseudomonas aeruginosa; finally one tube showed growth, red slant, yellow butt, no gas, no H2S produced and bacteria are Shigella sonnei this is in agreement with the results from TSI test which is used to identify bacteria that ferment any of the three sugars in the medium and produce by-products [25-27]. 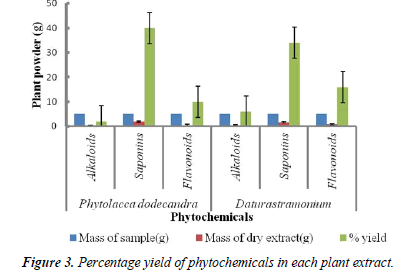 Figure 3: Percentage yield of phytochemicals in each plant extract

The inhibition zone (mm) ranging from 50 below was not easy to detect. This showed that the inhibition zone of effect of leaves crude extracts on Escherichia coli has not marked clear inhibition zone as compared to Staphylococcus aureus and Staphylococcus epidermidis. In a Kirby-Bauer test, the size of the zone of inhibition indicates the degree of sensitivity of bacteria to a drug. In general, a bigger area of bacteria-free media surrounding an antibiotic disk means the bacteria are more sensitive to the extract the disk contains (Figure 4). 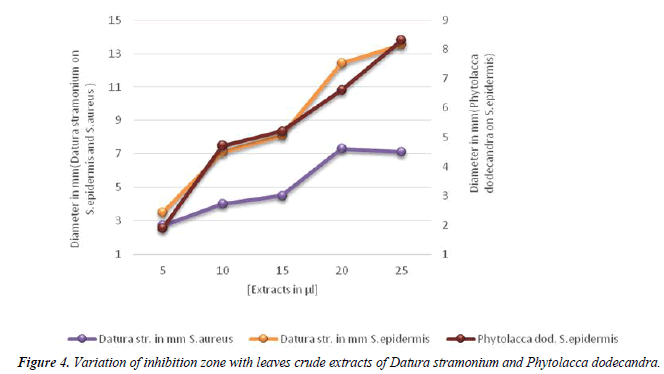 It is generally realized that for a minimum volume of 5 μl, S. aureus and S. epidermidis are inhibited at the corresponding diameter 1 mm and 0.5 mm respectively. The inhibition zone of leaves crude extracts of the plant Phytolacca dodecandra was observed mainly only on the disc diffusion on agar plates having the strain S. epidermidis. The extracts from Datura stramonium showed a poorly significant difference on inhibition zone. The crude extracts from leaves of Datura stramonium and Phytolacca dodecandra showed a positive result on strains such as S. aureus and S. epidermidis activity at the minimum inhibitory volume.

The results of our study support the previous work done by IKEDAF (1990) where he found out that the crude extracts of a plant with a minimum volume <100 μl is admitted to have the significant result in terms of anti-infection. Hence, the crude extracts of these plants shown activity at the minimum inhibitory volume of 5 μl. The crude extracts of these plants named above, either that prepared from mixture of methanol and ethyl acetate or methanol solvent didn’t show any inhibition zone on E. coli, which implied that they have no activity on this strain. Our findings are in the same line with previous report where they found out that the cell walls of Gram-negative organisms (E. coli) are more complex than the Gram-positive ones which act as a diffusion barrier and making them less susceptible to the antimicrobial agents than are Gram-positive bacteria [28-33]. These results obtained above are due to the active substances such as phenols, saponins, Flavonoids, alkaloids and others biochemical substances contained in Phytolacca dodecandra and Datura stramonium. We finally remark that due to the results obtained above, they enhanced that crude extracts from leaves of Datura stramonium are more efficient than crude extracts of Phytolacca dodecandra on S. aureus and S. epidermidis strains.

This study was funded by University of Rwanda-College of Science and Technology for their support and encouragement to accomplish this work. The authors thank the colleagues from the Chemistry and Biology department especially lab technicians.