Catheterization and surgical collaboration in the treatment of complex congenital heart disease with discontinuous pulmonary arteries.

Discontinuous branch pulmonary arteries (PA) is a rare condition most often associated with other congenital heart defects but can also present in isolation [1-4]. The distal segments of the PAs may receive blood flow from either persistent patent ducti arteriosus or collateral arteries. Absence of a main PA or PA bifurcation has been described in up to 16% of the patients with tetralogy of Fallot and pulmonary atresia [5,6]. Some with pulmonary stenosis have one branch PA in continuity with the main PA and the right ventricle while the proximal portion of the contralateral PA is atretic.

We present the case of a male neonate with complex congenital heart disease and discontinuity of the branch PAs, the left PA (LPA) originating from the left subclavian artery and the right PA (RPA) from the ascending aorta, each arising from a ductus arteriosus, and the proximal vessels separated by about 1 cm. This report describes the clinical management and utility of percutaneous intervention.

The patient was born a 3.5 kg, full term male with a prenatal diagnosis of a common arterial trunk, and was started on prostaglandin (PGE) infusion on day of life 1 secondary to hypoxia. Echocardiography initially appeared to demonstrate type 3 truncus arteriosus, with the branch PAs clearly demonstrated to each side of the arterial trunk. However, a trial off of the PGE infusion resulted in constriction of bilateral vessels and confirmation of discontinuous PAs arising from bilateral ducti arteriosus. In addition, the patient had dextrocardia, situs inversus totalis, DORV, malposed great arteries, pulmonary atresia, and a ventricular septal defect. The RPA originated from the transverse aortic arch, and the LPA from the left subclavian artery. He had a left sided IVC and SVC and a right aortic arch with mirror image branching. An extensive discussion at the institutional surgical case conference denoted the considerable distance between native PAs, therefore the neonate was referred to the catheterization laboratory for bilateral PDA stenting, to enable somatic growth prior to a primary surgical intervention.

Echocardiogram findings were confirmed by catheterization, and stenting was performed on day of life 12. The LPA arising from the left subclavian artery measured 2.7 mm. A 4f Glide Catheter (Terumo, Tokyo, Japan) was introduced retrograde into the distal LPA. This enabled exchange over a wire for a 4f Flexor sheath (Cook, Bloomington, IN). A 4 × 15 mm Multilink Vision stent (Abbott Vascular, Santa Clara, CA) was implanted, followed by a 4 × 20 mm Multilink Vision stent telescoped into the first, with a good result (Figure 1). 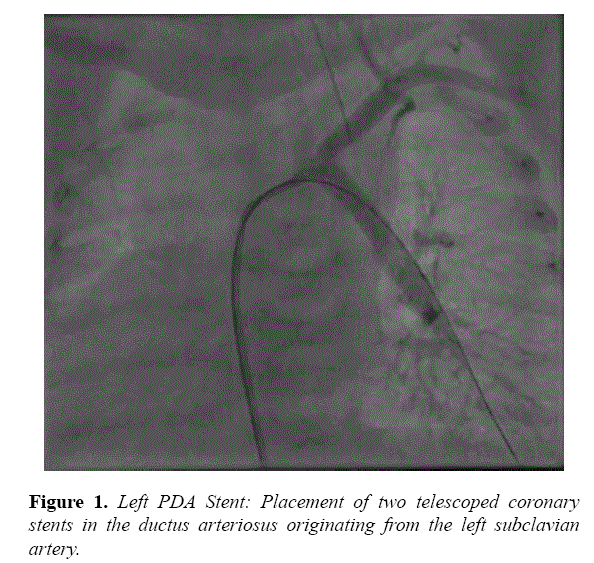 The RPA arising from the underside of the transverse aorta measured 3.1 mm. A 5f JR3.5 guiding catheter (Cordis, Fremont CA) was introduced into the distal RPA prograde after initial access was obtained with a modified pigtail catheter. A Rebel 4 × 12 mm stent (Boston Scientific, Marlborough, MA) followed by an Integrity 4 × 12 mm stent (Medtronic, Minneapolis, MN) were deployed in the RPA (Figure 2). 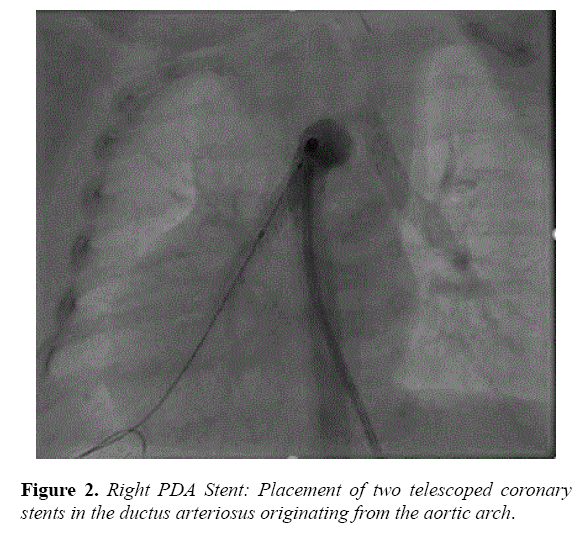 In each, the second stent was placed to ensure complete coverage of ductal tissue. He maintained stable oxygenation following LPA stenting; therefore PGE was discontinued prior to the RPA intervention. He was extubated on post-procedure day 1 and started on aspirin and furosemide. He had a stable clinical course following the procedure and underwent balloon dilation of the LPA stent at 11 months.

At 13 months, the patient was referred for surgical palliation, consisting of unifocalization of the discontinuous PAs, and a bidirectional Glenn procedure. The unifocalization was achieved by harvesting tissue from the anterior ascending aorta and excising an extra length of superior vena cava. The two harvested tissue samples were used to construct a tube graft. The stented portion of the PAs was excised. The homograft was anastomosed to the branch PAs using 7-0 PDS running suture. Finally, the superior aspect of the graft was connected to the SVC, completing the bidirectional Glenn. An extensive transesophageal echocardiogram determined the patency of the PAs prior to conclusion of the surgery.

Postoperative echocardiography had difficulty demonstrating the homograft portion of the Glenn surgery. The surgery and cardiology care team had anticipated possible challenges with the homograft and closely followed the patient for possible need for catheter intervention. At 16 months, echocardiography demonstrated diminished flow to the RPA and he returned to the catheterization laboratory. Angiography of the Glenn demonstrated a long segment stenosis corresponding to the implanted homograft, measuring 1.8 mm at the narrowest diameter extending nearly 20 mm in length (Figure 3). 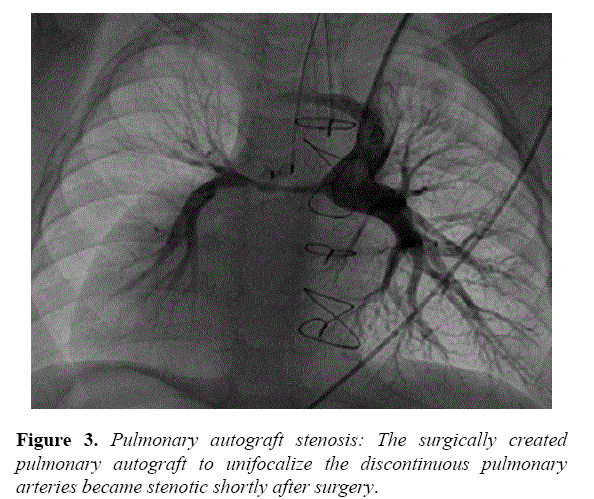 At the hilum, the RPA measured 3.4 mm, whereas the LPA measured 8.6 mm. A glide catheter (Terumo, Tokyo, Japan) was inserted through the left internal jugular vein introducer and advanced to the distal RPA. A 0.035” Amplatz extra stiff wire (Cook Medical, Bloomington, IN) was placed, followed by a Valeo 6 × 18 mm stent (Bard Medical, Covington, GA) that was deployed. Angiography performed post stent deployment demonstrated significant improvement in flow into the RPA (Figure 4). 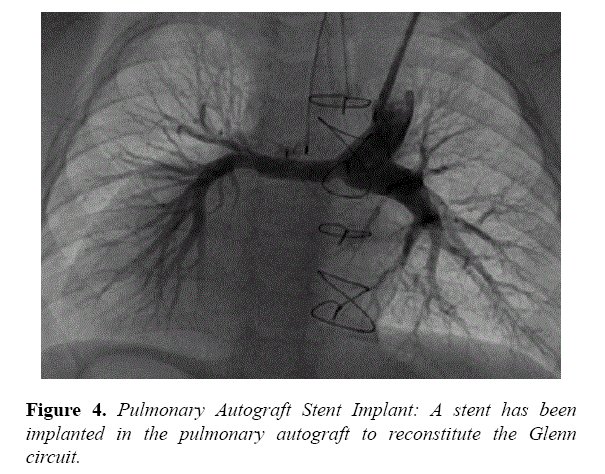 Figure 4: Pulmonary Autograft Stent Implant: A stent has been implanted in the pulmonary autograft to reconstitute the Glenn circuit.

Clinical follow-up demonstrated no restenosis, normal growth and development, and ventricular function. His oxygen saturations remained in the high 80’s to low 90’s. At 3 years of age, he underwent conversion to a biventricular repair with closure of the ventricular septal defect and baffling of the right ventricle to the pulmonary arteries via a 16 mm Contegra valved conduit (Medtronic, Minneapolis, MN).

Discontinuous pulmonary artery is a rare presentation, and can present in isolation or as part of other complex cardiac anatomy. Its development occurs during the fourth and fifth week of embryogenesis as the sixth pharyngeal arch that contributes to the RPA, LPA [7] and PDA develops. The proximal part of the sixth right arch persists, becoming the proximal part of the RPA while the distal section degenerates; the sixth left arch becomes the LPA proximally and forms the ductus arteriosus distally. Persistence of both distal segments with regression of proximal segments can give rise to discontinuous branch pulmonary arteries with bilateral PDAs. In the setting of pulmonary atresia, the patient has ductal dependent pulmonary circulation, requiring prostaglandin therapy until a surgery is performed. In this patient, the distance between the native pulmonary arteries created concern for a viable primary surgery. Catheter based stenting provided the most effective means to maintain patency and avoid surgery during this high-risk period.

Bilateral PDA stenting has been reported previously, most often a prelude to a later biventricular repair [8,9]. One case reported by Kobayashi et al. with a similar background died before reaching the Glenn stage [10]. In the setting of a biventricular repair, the unifocalized area will receive pulsatile, and higher pressure that will maintain patency of the surgery site and possibly promote growth. We remained concerned that the non-pulsatile, low pressure setting of the Glenn could create the environment for restenosis of the unifocalized segment. Repeat catheterization was essential to confirm the realization of our concern, and provide a means to re-intervene and re-establish broad patency of the Glenn circuit. As such, the patient thrived clinically and was later able to achieve biventricular repair.

This series of procedures and surgery demonstrate the collaborative potential between surgeon and interventional cardiologist to achieve success in patients with complex congenital heart disease. Catheterization provided a means to delay surgery for a complex problem where successful unifocalization would be difficult. Ductal stenting provided time for patient somatic growth and created a better presentation for surgical intervention. After the desired surgery could be performed, again catheterization provided the means to intervene on an anticipated problem arising from the delayed unifocalization. Between the two modalities, the patient has reached 3 years of age, with normal growth and development.

This report illustrates the importance of collaboration between interventional modalities. Each provides a means for the other to reach optimal parameters for their respective procedure. Recognizing that suboptimal conditions may exist, proper planning with the two specialists creates opportunities to ensure the success of the other.