Background: Cardiac manifestations of hyper-eosinophilia can have high morbidity with about 40-50% of patients having signs and symptoms of cardiac diseases. We present a case of Hyper- Eosinophilic Cardiomyopathy (HEC) due to Strongyloide Stercoralis (S. Stercoralis) infection with its characteristic Cardiac Magnetic Resonance (CMR) appearances.

Case presentation: An adult female underwent CMR for evaluation of LV dysfunction. At the time of examination, she had peripheral eosinophilia and had a positive history of Strongyloide infection. CMR showed moderate LV dysfunction with LVEF of 43%. The myocardium demonstrated a ‘wavy’ appearance with multiple focal areas of thinning and intervening normal segments. There was diffuse subendocardial enhancement on Late Gadolinium Enhancement, which did not fit any vascular territory.

Conclusion: CMR imaging is a useful tool in assessment of HEC by providing early diagnosis. HEC can also occur due to parasitic infection such as Strongyloide (roundworm) and may demonstrate unique/characteristic appearances of the myocardium on CMR.

Cardiac manifestations due to hyper-eosinophilia can cause high morbidity with dire prognosis [1]. Literature shows about 40%- 50% of hyper-eosinophilic syndrome patients will have signs and symptoms of cardiac disease [2]. However, Hyper-Eosinophilic Cardiomyopathy (HEC) due to Strongyloide stercoralis (S. Stercoralis) or roundworm infection is a rare presentation [3].

CMR is an excellent modality in evaluation of patients with cardiomyopathy. In this report, we present the characteristic CMR features of HEC due to roundworm infection.

A 39-year-old female presented to the cardiologist with a history of recent onset of acute chest pain. Electrocardiography (ECG) showed normal sinus rhythm with no features of ischemia or infarction. Echocardiography showed LV systolic dysfunction with global hypo kinesis. There was no LV hypertrophy or significant valvular incompetency. CMR was planned to look for the cause of LV dysfunction.

CMR findings included a non-dilated LV with systolic dysfunction and an LV Ejection Fraction (EF) of 43%. The myocardium demonstrated a ‘wavy’ appearance with multiple focal areas of thinning and intervening normal segments associated with hypo kinesis (Figure 1). There was also restricted vertical lengthening of the LV, suggestive of underlying diastolic dysfunction. No LV hypertrophy was seen. There was further intraventricular dyskinesis in the apical cavity. Increased trabeculations with sluggish flow was seen in the LV apex suspicious of early thrombosis. The Right Ventricle (RV) was normal in appearance with preserved systolic function. Left atrial dilatation was noted without significant mitral regurgitation. No myocardial edema was seen. On LGE imaging, there was diffuse sub endocardial enhancement which did not fit any vascular territory (Figure 2). 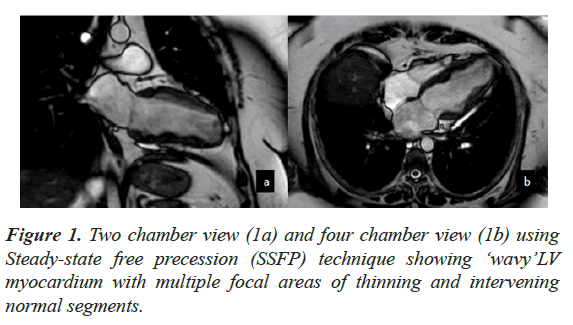 Figure 2: LGE images with four chamber (2a) and short axis (2b) views showing diffuse subendocardial enhancement in the LV (arrows).

Overall CMR appearances were suggestive of restrictive LV cardiomyopathy with focal areas of myocardial fibrosis and early LV thrombosis. On review of patient’s history and laboratory records, it was seen that the patient had peripheral eosinophilia and was positive for Strongyloide infection. Patient was also on long term steroid therapy for bronchial asthma. She was started on anti-parasitic treatment for roundworm and showed significant symptomatic improvement on follow up visits. The LV function also became normal on echo.

Based on the CMR and other investigations the diagnosis of hyper- eosinophilia related endocarditis was made with roundworm infection being the main cause.

Hyper Eosinophilic Syndrome (HES) is defined by persistent hyper eosinophilia (>1500 eosinophils/mm3) for more than 6 months [2]. There are multiple causes of peripheral eosinophilia including idiopathic, parasitic infection, allergy, malignancies, Loffler syndrome, Churg-strauss syndrome, allergic bronchopulmonary aspergillosis and connective tissue disorders [4-6]. Detailed clinical history and examination is needed to look for the cause of peripheral eosinophilia. Cardiac manifestations of hyper-eosinophilia include congestive heart failure and restrictive cardiomyopathy [7]. Restrictive cardiomyopathy pattern in hyper eosinophilia is due to toxic damages produced by activated eosinophils, which provoke endo myocardial fibrosis with obliteration of the right and left ventricles. It is characterized by three stages a) an acute necrotic stage, where direct endo myocardial infiltration and damage occurs, b) an intermediate phase, in which thrombi form along damaged endocardium especially in areas of relative stasis such as the ventricular apices and c) a fibrotic stage, which is characterized by endo myocardial fibrosis [2,7]. Involvement of RV is more common than LV [8].

CMR imaging is an excellent tool for the evaluation of cardiac disease in hyper eosinophilia. LGE imaging is capable of detecting myocardial fibrosis and inflammation. Specific pattern of LGE in hyper eosinophilia is due to presence of fibrotic tissue only in the sub endocardium which is unrelated to any particular vascular territory [3]. ‘Eosinophilic thrombus’ an early pathology of Loffler endocarditis can also be clearly demonstrated with LGE in CMR which differentiates apical thrombus from endocardial fibrosis [9]. Lack of myocardial wall thinning and transmural enhancement differentiates the endocarditis from infarction [7]. Other features of restrictive cardiomyopathy like obliterated bi-ventricular apices, bi atrial dilatation, mitral and tricuspid regurgitation can be easily detected on CMR [8]. CMR can also provide guidance regarding the optimal anatomic site for biopsy as well as evaluation of treatment response [10].

This case was different from the classical description as the RV was spared and there was no obliteration of the ventricular cavities. The ‘wavy’ pattern seen in this case is also not a well described entity and could represent a specific feature of roundworm infestation. Allergic causes of HEC are more frequent in developed countries and parasitic infections remain major cause in tropical and developing countries. Our case showed features of endocarditis (restrictive physiology with diffuse endocardial enhancement and early thrombosis) with history of Strongyloide infection and hyper- eosinophilia. This case also highlights the importance of picking up these pathologies early and starting appropriate therapy.

CMR imaging is a useful tool in assessment of HEC by providing early diagnosis. HEC can also occur due to parasitic infection such as Strongyloide and may demonstrate unique/characteristic appearances of the myocardium on CMR.

Written and informed consent from the patient was obtained to publish the clinical details and CMR images.

Written and informed consent from all contributing authors was obtained for submission of manuscript to the journal.

No conflicts of interests.

All authors have contributed significantly in this case report.