Bullous pemphigoid is a disease of the sub epithelial layer of the skin of autoimmune etology that ofen appears in elderly individuals and is characterized by the presence of cutaneous bullous lesions and erosions of the mucous membranes. The inital presentaton of a case of bullous pemphigoid in otorhinolaryngology is described. A 70-year-old man resorts to an otolaryngology consultaton for an history of odynophagia and pharyngeal foreign body sensaton with four months of evoluton. Concomitantly, he complained of severe itching related to the appearance of skin lesions. Physical examinaton revealed ulcerated lesions of the palate, tongue base and pharynx. Naso fbroscopy was performed, and mucous granulaton was observed in the right nasal cavity and hypo pharynx as well as larynx edema. The rest of the body had erythematous skin lesions in the region of the thighs and armpits as well as ?uid-flled, tense blisters with regular-sized borders compatble with the bullous pemphigoid. The patho physiological mechanisms responsible for pemphigoid lesions are not fully understood, but it's thought to be related to antbody-mediated basement membrane epithelial lesion. Usually, the manifestatons in the mucous membranes improve with systemic treatment insttuted to treat the skin lesions. The clinical course of these lesions is variable, generally following a relapsing chronic patern controlled by cortcotherapy. Long-term remission may occur afer months or years.

Bullous Pemphigoid (BP) is an autoimmune disease that affects the sub epithelial layer of the skin, frequently appears in elderly individuals and it is characterized by the presence of pruritic skin plaques, tense blisters and erosion of mucous membranes [1]. The pathogenic basis of the disease is not yet clarified, but probably involves the binding of immunoglobulin’s to components of the basement membrane, subsequent activation of complement and migration of inflammatory cells to sub epithelial tissue [1,2]. BP is primarily a disease of adults. The majority of reported cases occur in individuals over the age of 60 and the occurrence in children is rare [3,4]. Data on its incidence point to rates of approximately 20 cases per million individuals each year [1,5]. Despite this, some studies have suggested an increase in the incidence of BP, probably in the context of an aging population [5,6]. We report a case of BP in a 70-year-old male with involvement of the oral cavity, pharynx and larynx.

A 70-year-old male patient goes to an otorhinolaryngology consultation due to odynophagia associated with a sensation of pharyngeal foreign body that started 4 months prior. Concomitantly, he complained of severe itching related to the appearance of skin lesions. He denied history of smoking or alcohol consumption. As medical background, arterial hypertension and diabetes mellitus stand out, medicated and controlled for about 10 years. The objective examination revealed ulcerated lesions on the palate, tongue and pharynx (Figures 1 and 2). At naso fibroscopy, granulation was observed in the mucosa of the right nasal fossa, ulcerated lesion at the base of the tongue and edema of the hypo pharynx and larynx (Figures 3, 4 and 5). In the rest of the body, he had erythematous cutaneous plaques in the thighs and axillae region and the presence of blisters, filled with fluid, was found to be tense, with regular edges measuring about 1 centimeter (Figures 6 and 7). A biopsy of one of the lesions in the oral cavity was performed, with the anatomopathological result confirming the suspicion of BP. In view of these findings, the patient was referred to an autoimmune disease center where systemic corticosteroid therapy was started. The corticoid regimen started with 20 mg of prednisolone in the first week followed by 5mg every day during 3 months. The subsequent reassessment revealed a positive response to the initiation of corticosteroid therapy with a reduction in the number of skin lesions and better symptomatic control. 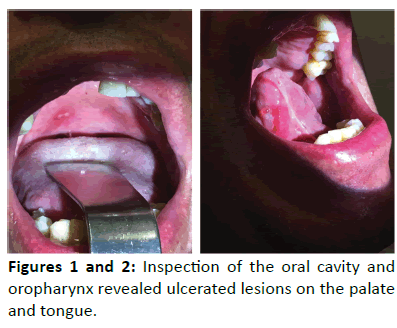 Figures 1 and 2. Inspection of the oral cavity and oropharynx revealed ulcerated lesions on the palate and tongue. 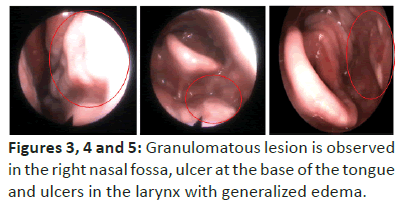 Figures 3, 4 and 5. Granulomatous lesion is observed in the right nasal fossa, ulcer at the base of the tongue and ulcers in the larynx with generalized edema. 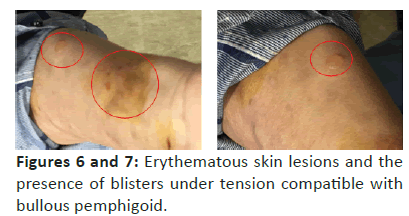 Figures 6 and 7. Erythematous skin lesions and the presence of blisters under tension compatible with bullous pemphigoid.

A prodromal phase from weeks to months may precede the appearance of cutaneous lesions in BP [1,7]. The prodrome may be pruritic eczema, papules or urticaria-like lesions [2]. Typical blisters are approximately 1-3 cm in size on an erythematous or non-inflammatory basis and can be numerous and distributed throughout the body [8,9]. The associated pruritus is common and can be severe [9]. The tense shape of BP blisters distinguishes it from the flaccid ones that appear in pemphigus vulgaris [1]. The inguinal and axillary area are the most frequent sites of skin involvement and mucosal lesions appear in 10%-30% of cases, with the oral mucosa as the most common site [10,11]. Less frequently, BP involves other mucous membranes such as the larynx, genitals and anus [10,11].

The diagnosis is based on the clinical presentation and confirmed by the histopathological result obtained through skin biopsy or mucosal lesions [1].

BP is a chronic disease characterized by exacerbations and long-term remission can occur after months or years [12]. However, BP is a potentially fatal disease. Results of studies conducted for 1-year mortality, in patients with BP, ranged between 11%-48%, presenting higher mortality rates than individuals without disease [12]. The reasons for these results may be multifactorial and the complications associated with immunosuppressive treatments are probably an enhancing factor [14].

In short, we believe that the otorhinolaryngologist must be familiar with this pathology, especially due to its increasing incidence and potential to involve areas of our specialty. The timely diagnosis and the correct orientation to define the systemic therapy to be instituted are important factors for the prognosis and quality of life of these patients. 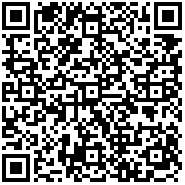