Biochemical evaluation of creatinine and urea in patients with renal failure undergoing hemodialysis.

Diseases of the kidneys are amongst the most important causes of death and disability in many countries throughout the world [1,2]. Renal failure is a systemic disease and usually turns into a route cause for several kidney and urinary tract diseases. Renal failure induces a slow and progressive decline of kidney function enhanced by various factors including infections, auto immune diseases, diabetes and other endocrine disorders, cancer, and toxic chemicals [3]. It is usually a result of complications arising from other serious medical conditions. Unlike acute renal failure, which happens quickly and suddenly, chronic renal failure occurs gradually - over a period of weeks, months, or years - as the kidneys slowly stop working, leading to an end-stage renal disease (ESRD) [4,5]. High blood pressure is one of the leading causes of kidney failure. It may also damage the blood vessels in the kidney affecting the secretion of waste products. Waste may secrete extra cellular fluids and further raise the blood pressure eventually leading to ESRD [6]. Anemia parallels the degree of renal impairment and it is a most important cause is the failure of renal erythropoietin secretion.

Hemodialysis is one of the renal replacement therapy [7]. The technique plays a vital role in the process for the extracorporeal removal of waste products such as creatinine, urea and free water from the blood, when the kidneys are impaired. The principle behind hemodialysis is the diffusion of solutes through a semi permeable membrane. Hemodialysis is usually performed with uremic patients for two to three times a week and the required times for dialysis vary from two to four hours [8]. The difference in the time of dialysis depends on various factors, including kidney function, amount of waste in body, level of salts and body weight. Dialysis improves many symptoms of kidney failure, but some problems including hypertension, anemia and itch often require additional drug treatments as well [9].

The progression of kidney damage is marked by the rise in two important chemical substances in the blood - creatinine and urea whose evaluation in serum helps to assess Glomerular Filtration Rate (GFR) followed by renal function. However, neither creatinine nor urea is directly toxic and they are only a measure of kidney function [10]. Creatinine is produced from muscles and is excreted through the kidneys along with other waste products. Creatinine concentration in serum is maintained by the balance between its generation and excretion by the kidneys. It has been estimated that 2% of the body’s creatine is converted into creatinine every day, resulting in the daily generation of creatinine at a fairly constant rate (male: 20 to 25 mg/kg/day; female 15 to 20 mg/kg/day) [11]. Males have higher serum creatinine levels than females because males have greater muscle mass. The quantity of creatinine in serum depends on their generation, glomerular filtration and tubular secretion of serum creatinine. Calculations based on serum creatinine and the age groups of the patient are used to estimate more precisely the degree of kidney function [12,13]. These calculated values are called the estimated glomerular filtration rate or eGFR. Sometimes a 24 hour urine collection and blood test together are used to measure the efficiency of kidney’s removal (or clearance) of creatinine from the body. These results are known as creatinine clearance [14]. Other factors affecting creatinine concentrations include age, sex, ethnicity, body habits and diet. However, neither creatinine nor urea are directly toxic and are just substances used to measure kidney function [15]. Urea is an organic compound and plays a vital role in the metabolism of nitrogen-containing compounds. It is a waste product from dietary protein and is also filtered into urine by the kidneys [16,17]. Urea nitrogen is a normal waste nitrogen product found in blood that comes from the breakdown of protein from foods. Healthy kidneys remove urea nitrogen from blood, but the level of urea in blood rises with kidney failure occurs [4]. An attempt has been made to evaluate the increase of creatinine and urea in patient’s serum of various age groups with renal failure during pre and post hemodialysis.

Random samples from patients with renal failure were collected from Dr. Jayasekaran Center for Kidney Diseases, Nagercoil, Tamilnadu during December 2016 and January 2017. The analytical study enrolled 50 patients with signs and symptoms of renal failure as identified by expert nephrologists and epidemiologists who critically reviewed and confirmed the persistence of kidney injury in all patients, using a standardized process. Among them, the percentage of males and females were 70% and 30% were their age ranging between 20 and 80 years. The study was commenced after receiving the approval of Institutional Review Board against submission of an individual written consent letter from all patients. The blood samples (5 ml) were collected from these patients before and after hemodialysis and was then centrifuged individually at 3000 rpm for 10 minutes to separate serum and stored at -20°C for biochemical evaluation.

The creatinine levels in the samples were assessed by Jaffe Kinetic assay (22, 2002). Creatinine in the serum sample reacted with picric acid in an alkaline solution (i.e., alkaline picrate) of the reagent and developed an orange colored complex. The quantity of creatinine in the test samples was calculated against the intensity of the color developed during the fixed time. The intensity of the color was measured using a fully automated Cobas C311 analyzer for detection of serum creatinine.

Urea levels in the samples were hydrolyzed by urease to form ammonium and carbonate [18]. Next, L-glutamate was produced by the reactions between ammonium and 2-oxoglutarate in the presence of glutamate dehydrogenase and the coenzyme NADH. During this reaction, 2 moles of NADH were oxidized to NAD+ for each mole of urea hydrolyzed. The rate of decrease in the NADH concentration was directly proportional to the urea concentration in the serum sample which was photometrically determined using fully automated Cobas C311 analyzer.

The results obtained were subjected to statistical analysis to check whether there was any correlation between creatinine and urea level in the samples on pre and post hemodialysis with SPSS version 22.0 statistical software.

Renal failure is a gradual, progressive and irreversible loss of normal functioning of kidneys. Increased levels of urea and creatinine excretion in blood by impaired kidneys made very complication in patients with renal failure before hemodialysis. A total of 50 patients who were diagnosed in kidney care centre for renal failure based on their clinical history, clinical examinations and renal function tests were randomly evaluated. Bio markers levels of such as serum creatinine and serum urea before and after the hemodialysis session were screened. The details of the patients are cited in Table 1 and creatinine levels in Figure 1. 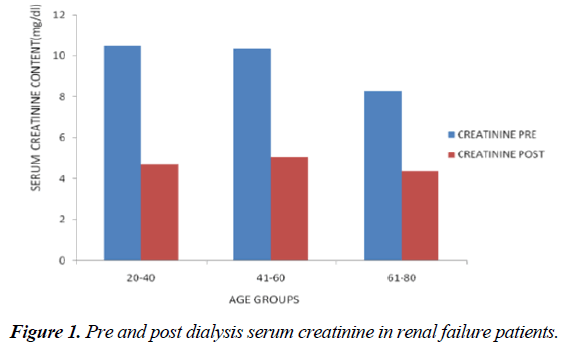 The mean SD values of serum creatinine before and after hemodialysis were compared separately in 3 age groups of subjects (21-40 yrs, 41-60 yrs and 61-80 yrs) and are summarized in Table 2. Creatinine is a resultant of muscle metabolism and its elevated level in blood indicates kidney disease. The mean values of serine creatinine level were observed to be less in the age group between 61 and 80 years. A statistically significant difference in the mean values of creatinine was observed in all the three age groups when compared with the reference range. The difference between age groups may be attributed to the fact that smaller body size has lower metabolic demands and shorter individuals require less renal function. 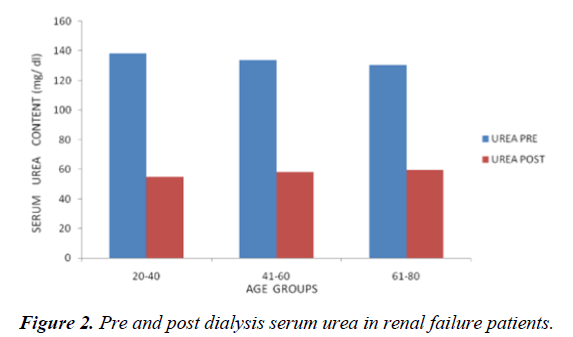 During hemodialysis, excess urea from the patient’s blood is slightly removed in order to prevent accumulation. The occurrence of balanced amount of consumed proteins is also an important step to avoid excessive production of urea [22]. The hemodialytic process carried out in the studied patients was perceived to be efficient, because significantly reduced levels of creatinine and urea were recorded ensuingly. According to Draczevski and Teixeira [1], the assessed pre- and posthemodialysis urea levels, obtained reflected a significant reduction in serum levels, indicating hemodialysis as an efficient technique. Removal of waste during dialysis also depends upon proper timings of dialysis, patient awareness, and appropriate dialyzer and dietary habits of patients [23]. Urea and creatinine levels are important biomarkers as they play a pivotal role in diagnosis and follow-up of kidney failure. Urea, one of the by-products of protein metabolism, accumulates in the blood of patients with kidney failure and causes uremia [24-26].

A firm relationship was observed between serum creatinine and serum urea levels among renal failure patients presenting information on renal function among varied age groups. Both serum creatinine and serum urea are widely accepted biomarkers to assess the renal functions. Hemodialysis forms an effective process as an efficient and indispensable process for the filtration of undesired metabolites such as creatinine and urea in patients at considerable range thereby increasing their life expectancy. However, today’s health research warrants newer techniques for an early detection and quicker prevention of complications that arise from kidney. 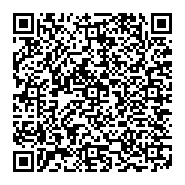