The aim of this study is to document Transepidermal water loss (TEWL) in infants living in urban and non- urban areas as well as individual and environmental factors, and to search for any distinguishing features and correlations. A significant difference was observed in trans epidermal water loss in children residing in a region located outside a large city or urban area, and a significant difference was observed also in cuticle water content measured at the same time. It was clear that infants living in an administrative district outside of an urban area retained more water in their cuticles than infants residing in a large city, and transpired more water through the epidermis. It was suggested that TEWL in preschool children may differ according to age and gender, and is influenced by outdoor humidity, outdoor temperature, surface temperature, and cuticle water content.

Transepidermal water loss (hereinafter ‘TEWL’) is one of the indicators of the skin’s barrier function in intercellular lipid of the stratum corneum (SC). In the United States, research about the SC’s barrier function rapidly gained momentum in the 1970s [1]. Since then, numerous studies have compared TEWL in Atopic Dermatitis (AD) infants’ clear and affected areas of the skin, and conducted chronological observation of TWEL levels in infants with AD and comparison with a control group to assess the effects of skincare preparations and products [2-5]. AD, which involves the elevation of the SC’s barrier function indicator TEWL, is one of the allergy diseases that are on the increase. A large percentage of the cases manifest in infancy. Suspected aggravating factors include perspiration, poor physical condition, climate, sunlight, mental stress, fatigue, curettage, and food allergy. There are not many studies scrutinizing TEWL in healthy children in the 21st century. The quantitative in-vivo measurement of SC’s barrier function examines a minute amount of moisture transpiring through the SC. In other words, trans epidermal loss of moisture through the SC (TEWL) is measured in a cool, perspiration-free environment of infants living in a condition of minimal perspiration. A basic study has been carried out on the TEWL of infants living in urban and non-urban areas. This paper reports TEWL and SC water content of infant living in urban and non-urban areas as well as their environmental factors, measured at the same time.

The study covered infants aged 1-6 years old who attend childcare centres in the urban Area A and non -urban Area B.

Measurement and investigation of the children’s skin conditions

Portable skin moisture gauge called Moisture Meter (SC Compact) was used to measure the subjects’ water content in the SC twice at the centre of the volar forearm. The higher of the two results was used as analysis data.

The author contacted the department in charge of childcare centres at the selected areas’ local councils to seek cooperation with this research. The childcare centres were asked to distribute and to collect research description, consent forms, and questionnaires on demographics such as age and gender of children to parents of the infants. The subjects were the returned consent forms of the parents for having their children’s TEWL and SC water content measured as well as completed survey questionnaires. The first survey was conducted in early summer (June-July) and the second survey was conducted in autumn (mid-October).

Attributes of the subjects

*No significant difference between the two areas

TEWL, SC water content and environmental factors for all subjects 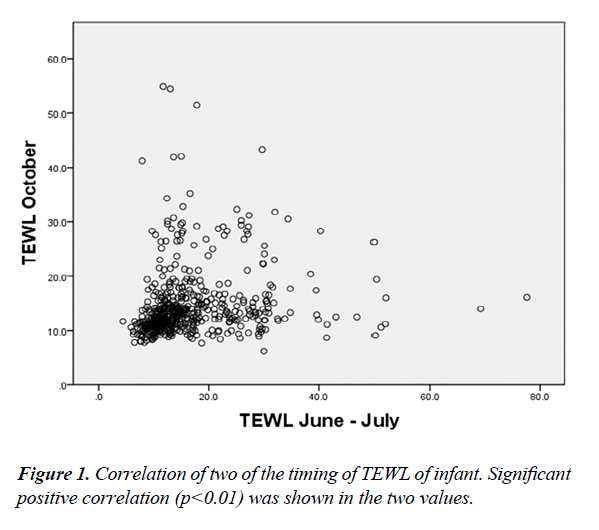 Figure 1: Correlation of two of the timing of TEWL of infant. Significant positive correlation (p<0.01) was shown in the two values.

Table 3 shows the average results of two measurements in TEWL, SC water content and environmental factors, broken down by area. In the first measurement, Area B showed significantly higher results than Area A in TEWL, outdoor temperature, surface temperature and SC water content. The exception was the outdoor humidity, which was signficantly lower in Area B than in Area A. In the second measurement, there was no signiicant difference in outdoor air temperature between two areas, but TEWL,SC water content and outdoor humidity were signficantly higher in Area B than in Area A. 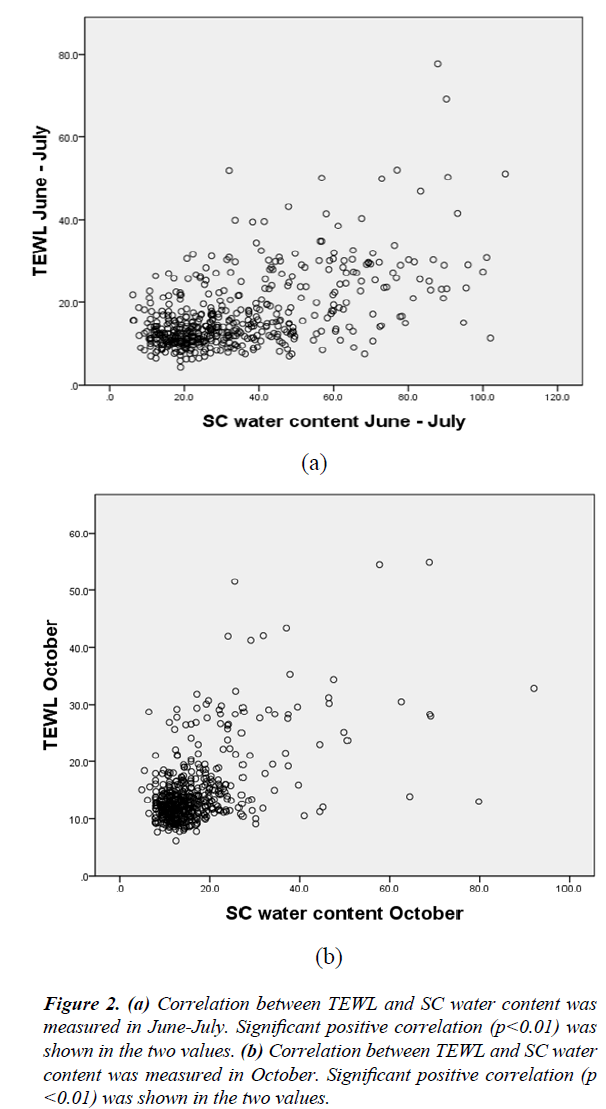 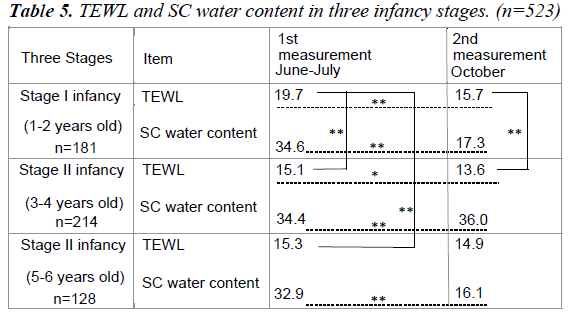 Figure 3 is a scatter diagram of age (month) and TEWL in two measurements of TEWL. There was a significant negative correlation only for the June-July measurement. 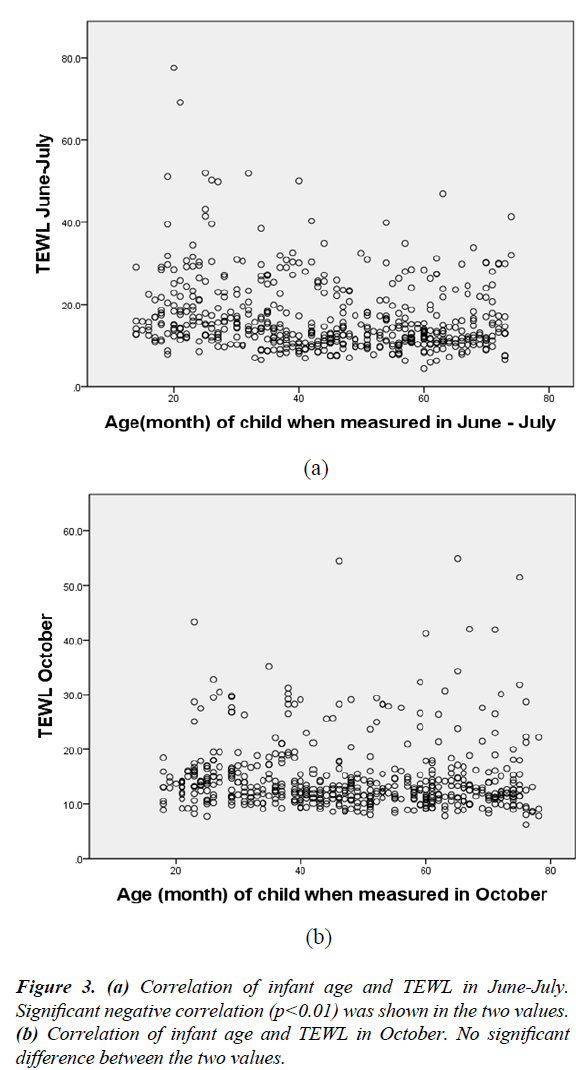 TEWL and SC water content, broken down by age and gender

This study has shown that male infants have a significantly higher TEWL than female infants do. There was no significant genderbased difference in infants’ SC water content. The TEWL of the men from the 20-year-old to 50-year-old is significantly lower than the water loss of women of the same age group, regardless of the location. With ageing, gender-related differences in TEWL assimilate. Young men show higher SC water content in comparison with women [11]. In other words, genderbased tendency in TEWL and SC water content among adults contradicted the findings of this study. Further examination of TEWL is needed with different measurement environment, increased subject count and broader range of subjects’ ages to cover school-age and adolescent children.

This study has shown significant difference in infants’ TEWL, SC water content and surface temperature between the two measurement timings, with the results from early summer (June- July) significantly higher than those from autumn (October). This means that infants’ water retention function in SC deteriorates in autumn compared to early summer, while their epidermal barrier function lowers in early summer compared to autumn. Elements contributing to SC’s water retention function include intercellular lipid, sebum, lactic acid/urea components of sweat and hyaluronic acid generated on the epidermis. This is why children and elderly persons with low sebum secretion are prone to dry skin in winter [12]. In Japan, compared to spring-born babies who grow up in warm and humid conditions, autumn-born babies who grow up in cold and dry conditions tend to suffer from dry skin, with some developing a mild case of AD [13]. This was considered to be the reason infants’ SC water content was lower in autumn than in early summer. In this study, the SC water content was high in early summer when TEWL also increased. When the skin’s inside-to-outside barrier function is compromised, the TEWL from the skin surface increases, thereby reducing the SC water content and triggering dry skin [10]. For this reason, this study’s subjects have a low risk of developing dry skin and do not show the deterioration of the epidermal barrier function to the extent of triggering skin problems. Since the level of surface temperature was to have retained a large amount of water in the SC during summer, and transpired a large amount of water from the epidermis through physical activities and perspiration, keeping the skin’s functions to retain water content, perspire and control the body temperature active. There are some reports suggesting that the amount of ceramide in intercellular lipid, one of the factors contributing SC’s water retention performance, is lower in those suffering from AD, and that the amount of ceramide has correlation with TEWL. However, not many of these reports directly establish connection with the SC’s water retention performance, and the SC water content could be affected collectively by the functionality of not only the epidermis but also sweat glands and sebum. The SC’s mechanism of water retention remains largely unexplained [9]. This is why the results of this study must be interpreted with caution.

This study measured infants (aged 1-6 with the average of 3Y8M) volar forearm TEWL in early summer (Average 16.7± 8.9 g/ m2/h) and autumn (Average 14.7 ± 6.4 g/m2/h). In similar past studies, no significant differences in TEWL were found between infants and adults, either on the buttocks or on the volar forearm [2]. TEWL of healthy adults, measured in a cool, perspirationfree environment of around 20 degrees Celsius, was around 5 g/ m2/h at the body trunk and limbs and over 10 g/m2/h in the face, which has thinner SC [13]. TEWL of 1-2 year olds (average TEWL=9.79 g/m2/h) and 4-5 year olds (average TEWL=7.2 g/ m2/h), measured at their volar forearm in the environments of 20 ± 2 degrees Celsius and 50 ± 10%, had no significant difference from TEWL of 20-35 year olds (8.9 g/m2/h) [14]. TEWL of infants aged 38 months or above, measured at the abdomen, thigh and buttocks was similar to that of their mothers’ [6]. As for school- age and adolescent children, TEWL of 10-14-yearold children (measured at the forearm) was significantly higher than that of adults in both summer and winter [15]. In TEWL measurement, it is difficult to have uniform measurement conditions. This is why measurements are taken in multiple locations and timings, or carried out on subjects of different developmental stages. Future studies should consider taking measurements at multiple locations and covering subjects of different developmental stages such as school-age children [16].

Infants’ TEWL, SC water content and surface temperature were signiicantly higher for subjects in the non-urban area than those in the urban area. The criteria for selecting the survey areas in this survey were the population size, population density, opposite tendency in juvenile (15 years old or younger) population density and location (in the Honshu main island of Japan). Area A has a high population, high population density and low juvenile (15 years old or younger) population density, with children growing up surrounded by many adults. Area B has a low population, low population density but high juvenile (15 years old or younger) population density, with many children growing up with other children and adults. No past study reporting the effect of infants’ living environment (e.g. different areas of residence) on their skin was found. However, some studies reported that the lower the room temperature is, the lower the SC water content’s indicators become, including conductance, TEWL, blood flow volume and the skin’s surface temperature [8]. In the comparison between long-term bedridden seniors and healthy subjects, the bedridden patients had a higher ratio of those suffering from dry skin and skin atrophy, and demonstrated significant differences in TEWL, SC water content and dermal pH [17]. A study indicated that the high TEWL values shown for some subjects may be indicative of a mildly stressed subject rather than suggestive of a sustained high-water flux [7]. These reports show that it is necessary to examine not only external environmental factors but also living environment factors, lifestyles and stress, which could affect epidermis and SC, in future studies on children [18].

The two measurements of infants’ TEWL in two areas found the following:

• Infants’ TEWL was significantly higher in early summer (June-July) than in autumn (October).

• Seasonal difference in infants’ TEWL became smaller as they advanced through their developmental stages.

• Male infants’ TEWL was significantly higher than that of female infants.

• Infants’ SC water content showed no significant difference according to their developmental stages or gender, but indicated a significant seasonal difference (higher in early summer than in autumn).

I wish to acknowledge the cooperation and the support of all people who participated in this research.

The author has no conflicts of interest directly relevant to this article.