The therapeutic role of plant materials in multi-disease conditions has necessitated its continued exploration and consumption. This has led us to evaluate the antimicrobial property and phytochemical components of Catharanthus roseus (L.) G Don leaf extracts. Using standard protocols, the phytochemical screening of different extracts namely ethanol, methanol, hot water and cold water (control) extracts of C. roseus leaf was done. The antimicrobial activity of the same plant material was carried out using Agar well diffusion method. This activity was evaluated by measuring the zone of inhibition. The strongest inhibition activity of the leaf extract was observed against Aspergillus niger (1 cm zone) at 20 g of leaf extract. The result showed that methanolic leaf extract had the highest antimicrobial activity against A. niger with zone of inhibition of 1 cm with other extracts showing impressive results also. It then follows that the antimicrobial activity exhibited by these extracts on the test pathogen indicated the inhibitory potentials of the extracts against that organism.

Plant and its product over the years have been used for diverse purposes with which one of such use can be seen in medicine (Donald, 1986; Dubey et al., 2011). Quite a number of plants have been reported to have pharmacological properties as they are known to possess diverse secondary metabolites like glycosides, saponins, flavonoids, steroids, tannins, alkaloids and terpenes that are typically utilized to combat the disease-causing pathogens (Kamal and Amir 2010). Today, many modern medications could be traced back to their botanical roots. Biological activities of some plants and their products include antifungal, antiviral, anti-inflammatory, anti-carcinogenic and anti-atherosclerotic, antibacterial, antimutagenic and anti-allergic activities (Ikken et al., 1999; Noguchi et al., 1999). A pointer to the biological activities these plants possess may be linked to their antioxidant activity (Chung et al., 1998). Many applications such as the preservation of raw and processed food, pharmaceuticals, alternative medicine and natural therapies have been instigated by the antimicrobial activities of plant extracts (Lis-Balchin and Deans 1997; Reynolds, 1996).

Catharanthus roseus (L) G. Don which belong to the family Apocynaceae is an ornamental shrub that grows up to 30- 100 cm in height and it is commonly known as Madagascar periwinkle (Tiong et al., 2013). This plant has its origin from Madagascar but can be found around the world due to its ability to survive varieties of habitats (Van Bergen and Snoeijer, 1996). C. roseus have been proven to exhibit anti-diabetic, anti-helminthic, anti-bacterial and pesticidal activities (Singh et al., 2001; Tiong et al., 2013; Balaabirami and Patharajan 2012; Kaushik et al., 2017). It has also shown potential as a cardio-vascular drug (Jayanthi et al., 2010; Kaushik et al., 2017).

Aspergillus niger is one of the most common species fungi that belongs the genus Aspergillus and known to causes black mold disease on specific fruits and vegetables such as grapes, onions and peanuts and it is a common food contaminant (Sharma, 2012). It is a filamentous ascomycete that has the ability growing fast growth due to its pH tolerance making it the most important cosmopolitan fungi that is associated with postharvest decay of diverse crops (Perrone et al., 2007; Perfect et al., 2009). Because of their cosmopolitan nature, human beings frequently get exposed to its spores and vegetative forms which are present in air, on foodstuffs and others stored consumables products and which could instigate allergic problems due to its ability to produce certain mycotoxins which are heptocarcinogenic, nephrogenic immunological in nature (Sharma, 2012).

The aim of this study is to determine the antimicrobial activities of C. roseus on A. niger and also check the phytochemistry of the plant.

Collection and authentication of plant material

The leaf and bark of C. roseus of the white and pink flower type was collected from Oluwusi Estate Akure, Ondo State, Nigeria. The Plant materials were identi?ed and authenticated by a taxonomist at the Department of Biology, Federal University of Technology, Akure.

Preparation and extraction of plant samples

Fresh harvested plants of C. roseus were washed with water, and the leaves were shredded to remove the mid ribs. 20 g each of the leaves was weighed on an electric weighing balance for ethanol, methanol, hot water and cold water extraction. 20 g of the leaves was grounded with mortar and pestle, and was put into four different Petri dishes labelled (A-Ethanol, B- Methanol, C- Hot water, D-Cold water). Then 90 ml of each of the solvents was added to the grounded leaves for extraction and was shaken vigorously for 30 minutes and allowed to settle. The mixtures were then filtered with the aid of a muslin cloth and the filtrates were kept while the residues were discarded.

39 g of potato dextrose agar (PDA) powder was weighed into a cleaned conical flask and was suspended in 100 ml of sterilized distilled water which was thoroughly mixed together to form a homogenized solution. The solution was then slightly warmed to dissolve the powder completely, after which it was sterilized with an autoclave at 121°C (151bs pressure) for 1 hour. Afterwards, it was thoroughly mixed allowed to cool down for 30 minutes before dispensing.

All fractions of the extracts were subjected to phytochemical screening to test for the presence of compounds such as saponins alkaloids, flavonoids, glycosides, tannins, phenol, carbohydrates, phytosterols, quinone, steroids, terpenoids, coumarins, anthraquinone and protein using the method described by Schmeller and Wink (1998).

A. niger was obtained from the Department of Biology, Federal University of Technology Akure Ondo State, Nigeria. It was sourced from previously-preserved stock in the Undergraduate Research Laboratory of the department. The test organism was inoculated onto potato dextrose agar for a period of 5 days and grown at temperature of 27°C to ascertain its viability. The organisms were cultured three times to purify it. Purity was later con?rmed by sub-culturing of the organism to obtain a single strain.

Agar well-diffusion method was employed for antifungal assay following established protocols (Murray et al., 1995 modified by Olurinola, 1996). The preparation was incubated at room temperature. The zone of inhibition diameter formed in the medium was measured to determine antifungal activity of the different concentration of the extr acts, the zone of inhibition is as follow; 0.1 cm, 0.3 cm and 0.5 cm diameter. The growth of fungi entered into the zone at 0.1 cm at 0.3 cm the growth still entered into the zone which showed that there was no inhibition but at 0.5 cm there was a clear zone which was an indication of an inhibition.

The Minimum Inhibitory Concentration for fungal isolates carried out by adding 20 g of the extract C. roseus leaf into 100 ml volume of sterilized distilled water and was ?ltered then 0.50 cm of the mixture was drawn and put into the well and was serially diluted to get concentration of 0.1 cm respectively.

Spread plate method was used for the inoculation. 1 ml of the fungi was aseptically transferred into the medium in the Petri dish and incubated at room temperature for 24 hours. After the incubation period, fungi growth was observed.

The data obtained for antifungal activity was subjected to one-way Analysis of variance (ANOVA) and means were separated using the New Duncan’s Multiple Range Test (p<0.05).

The inhibitory effects of C. roseus leaves that were infused into ethanol (A), methanol (B), hot water (C) and cold water (D) on growth of A. niger can be seen in the Plates below. These effects are expressed as zones of inhibition where E.I=Expressed Inhibition; S.I=Supressed Inhibition; N.I=No Inhibition and Z.I=Zone of Inhibition.

The quantitative phytochemical analysis of C. roseus white and pink flower type leaf extracts in different solvents is shown in Tables 3 and 4 respectively. For the white flowered C. roseus leaf extract, the fungi isolate tested showed varying degree of susceptibility to the activity of the extract. Saponins and coumarins showed 25% inhibition with methanol extract as against ethanol extract. Tannins, quinones and terpenoids were observed to vary between 25% to 100% inhibition. However, Glycosides, phenols and proteins were not susceptible to the fungi isolates. For the pink flowered C. roseus leaf extract, most of the secondary metabolites investigated were more deposited in the leaf with methanol and ethanol extract having the highest zone of inhibition as against hot water and cold water extract (Figures 1-4). 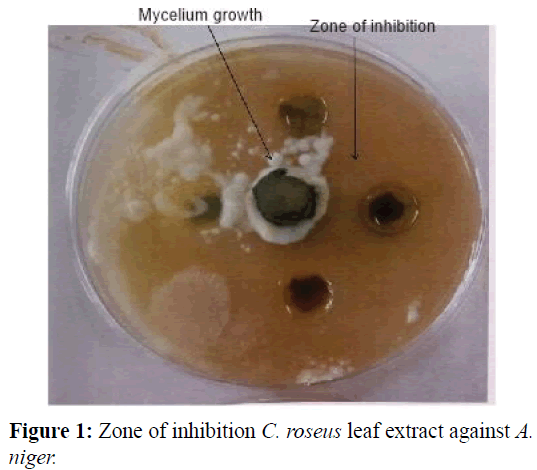 Figure 2: (A) The inhibitory effects of C. roseus leaves that were infused into ethanol (A), methanol (B), hot water (C) and cold water (D) on growth of A. niger; where E.I = Expressed Inhibition; S.I = Supressed Inhibition; N.I = No Inhibition and Z.I = Zone of Inhibition.

Medicinal plants are very important and widely available resource for primary healthcare and complementary system. The tested extract showed very strong antimicrobial activity against A. niger. The strongest inhibition activity of the leaf extract was observed against this organism (1 cm zone) at 20 g. This may be as a result of the differences in chemical composition and structure of cell wall of the microorganism (Pankaj et al., 2008). From this study, there are different mechanism by which phytochemicals exerts antimicrobial activities. Flavonoids are known to exhibit a wide range of biological activities which include antimicrobial, anti of biological activities which include antimicrobial, antiinflammatory, analgesic, anti-allergic effects and antioxidant properties (Maikai et al., 2009). The antibacterial activity of flavonoids had been repeated to be a result of their ability to form complexes with bacterial cell walls, extracellular and soluble proteins (Scalbett, 1991) (Tables 1 and 2).

Simultaneous comparison of the MIC values exhibited by ethanol, methanol, cold water and hot water fractions against the tested fungi isolates showed that MIC values of leaf extract were highest than in the leaf itself. This shows that there might be synergistic antifungal enhancing interactions between different bioactive components of the leaf extracts. This trend is also supported by Abioye et al., 2013. Potential therapeutic roles of plant materials have not only validated their efficacies in combating various diseases but have also identi?ed the pharmacological roles of active components of these (Pankaj et al., 2008). The results of phytochemical analysis of the leaf of C. roseus showed the presence of a number of secondary metabolites including saponins, alkaloids, flavonoids, tannins, phytosterols, glycosides, coumarins and antraquinones among others (Tables 3 and 4). Saponins were detected in the leaf of C. roseus in ethanol and methanol extract respectively. Metabolites including steroids, terpenoids, tannins, phenols among others are noticeable in varying degree in the leaf of C. roseus. In agreement with Ajaiyeoba (2002) presence of tannins in two leaf extract (water and ethanol) and absence of saponins in both leaf extract was noticed. The presence of these secondary metabolites gives credence to C. roseus therapeutic application in the treating diseases such as cardiac in?rmity (Ajaiyeoba, 2002), intestinal disorders and other fungi infections (Millogo- Kone et al., 2008). It was earlier suggested that the presence of flavonoids in the leaf of C. roseus might account for its relatively high radical scavenging activity (Adaramola et al., 2012). The presences of these phytochemicals in plants show a great correlation for the antimicrobial activities of the plants (Lewis and Ausubel, 2006). The alarming increase in the pathogenic resistance to orthodox medicine had hitherto being unabated. However, the quest for antidote to this health scourge necessitated increased interest in the ?eld of traditional medicine. The susceptibility of the fungi isolates investigated to the ethanol extract of C. roseus suggested the extract possesses antibacterial potential (Igwo-Ezikpe, 2013). The result of the antimicrobial activity con?rmed that methanol leaf extracts had the highest antimicrobial activity against A. niger with zone of inhibition of 1 cm. This is a clear indication that the extract may have very high potent efficacy against multi-fungi infections.

A. niger growth was mostly inhibited by the methanolic leaf extract which showed that methanol extracted very potent active ingredients from C. roseus than other extract. This suggests that potent secondary metabolites are inherent in the leaf. However, an investigation into the antifungal potency of the extract is however recommended for further study. It also follows that C. roseus extract could be used to treat fungal infection especially A. niger. This imply that it can be used to substitute the use of synthetic chemicals for control of fungal infections caused by A. niger and might be potent against all other fungi as a broad-spectrum fungicide.