The relationship and associated complications between foreign bodies and otolaryngology is a long lasting challenge in practice. The impaction of foreign body into any site/part of human body is a common accident. Removal of such foreign bodies depends on the nature and mobility of the particle; in addition, early diagnosis and removal of foreign particles is crucial to prevent futuristic complications. We present a 28-year-old man who had an unusual foreign body airgun pellet since 17 years lodged in his nose. On clinical examination the foreign body was felt inferior to right nasal vestibule and in the oropharynx the pellet could be palpated just lateral to the upper gingivolabial frenulum. It was removed under local anesthesia and postoperative analgesics and antibiotics given.

Since time immemorial the problems of foreign bodies, their identification and management have posed a great challenge. The impaction of foreign body into any host leads to a burden for which human beings are not an exception. Otorhinolaryngologists had a never ending diagnostic and therapeutic challenge due to foreign body – host interactions and associated complications [1].

In an Otorhinolaryngologist point of view, management of patient with a foreign particle-host interaction is phenomenal and clinically highly significant, since the removal of particles is either easy or difficult as the process is depending on the nature of particle and location of the infection.

Very rarely, a foreign body will not be removed after repeated attempts, either due to a peripheral location or due to a long-standing history [2]. Presence of foreign body in nose is not a rare finding. The early diagnosis of foreign body is crucial to minimize complications, but it is difficult due to a paucity of clinical or radiological signs. At later stages, foreign bodies may cause a variety of symptoms and signs and may result in complications [3]. Various instances have been reported earlier citing cases of tooth, dental amalgam, pellets etc. in the nose. However, the presence of a pallet is a rare case in which the patient overlooked it for almost 17 years. This paper presents a rare case where presence of metal foreign bodies in the body may quite frequently be overlooked immediately after injury infliction. An approximate insight into the main characteristics of the gunshot wound canal, foreign body location, and anatomical relationship between the projectile and vital structures of the head i.e. skull, (Figures 1-3) are all mandatory prerequisite considerations. The degree of difficulty will depend on a number of factors including the age of the patient, the type of foreign body, the interval between inhalation and removal, the skill of the surgeon, anesthetist and the equipment available. 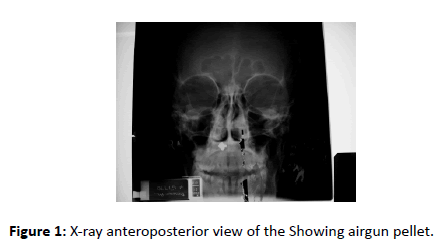 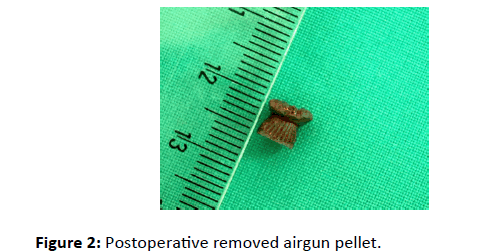 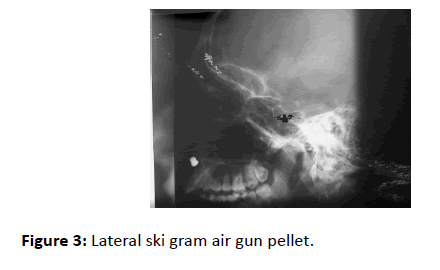 28-years-old Omani male visited our ENT outpatient department, the X-ray results show the presence of foreign body suspected air gun pellet in the floor of nose. He gave the history of air gun pellet embedded in floor of right nasal cavity since 17 years. He requested that he wants to get it removed now. On examination the foreign body was just felt inferior to right nasal vestibule and in the oropharynx the pellet could be palpated just lateral to the upper gingivolabial frenulum. He was presented for foreign body removal under local anesthesia. 2 ml of local infiltrated in right gingivolabial sulcus and 2 cm long incision kept. By exploring the wound, pellet has been isolated followed by wound closing with 3/0 inverted catgut sutures. The pellet was removed carefully (Figure 4); antibiotics, analgesics and antiseptic mouth wash were suggested postoperatively, no immediate complications noticed.

Airguns are believed to be lethal, since they have been causing life-threatening injuries. Ktesbias II of Egypt first used compressed air to propel a projectile around 250 BC. Airguns can be used as wind chambers and air reservoirs when they are connected to a cannon barrel which was used in the wars between 17th and 18th centuries [4]. It is believed that the the modern high-powered rifles can propel a pellet beyond 1100 ft/s (330 m/s), more or less with the speed of sound and produce a noise similar to a 0.22-calibre rim-fire rifle. They can generate muzzle velocities of 350 ft/s or more. An explosion which imparts greater velocity and more penetrating power to the pellet can be produced when the pellets are dieseling and or ignited by the heat. The typical projectile used in rifled air guns is the lead diabolo pellet. The most common projectile used is lead diabolo pellet which is a wasp-waisted projectile. These projectiles are flared at the base, which improves directional stability with a variety of head styles. In our case, we observed effected tissues such as laceration and crushing within the missile tract. We believe that this is due to the relatively low-energy missiles that produce direct effects on tissues. A projectile with the speed of 125-230 ft/s or 38–70 m/s can penetrate into the human skin and children and young adolescents are the highly affected age groups. The risk associate with these injuries are predominant in head and neck region as it has vital neurovascular bundles, major vessels, trachea, oesophagus, and spinal cord. In summary, the pellets are lethal and the risk associated with the most sensitive organs and tissues, hence, these injuries demands early diagnosis good surgical skill and nice post-operative management. In our case the sub labial approach taken was a good decision because it gave good cosmetic results and a very close and direct access to the foreign body without much tissue damage and with practically no much of track tracing which is very important and mandatory in the region of head and neck. Such injuries though less in our region but the meticulous tracking and minimal tissue dissection that are prerequisite demand for delivering the foreign body prompt us to report this case which will furnish a good guide for others to deal such cases.