An infrequent association: Left ventricular non compaction with bicuspid aortic valve and coarctation of the aorta.

Left ventricular non compaction (LVNC) is a rare congenital cardiomyopathy that can be diagnosed at any age. This disease makes the LV to become “spongy” and have two separate layers: a compacted epicardial layer and a large non compacted endocardial layer with trabeculation and deep recesses communicated within them but not with coronary circulation. Its reported prevalence is between 0.014 and 1.3% according to echocardiographic studies [1].

Despite the exact mechanisms are not well comprehended, several gene mutations (especially in MYH7 and MYBPC3 genes) avoid myocardium to become smooth and firm (compacted) during intrauterine life [2].

This condition is usually asymptomatic, but can be complicated by heart failure, thromboembolism or ventricular arrhythmias, including sudden cardiac death. It’s primarily diagnosed with echocardiography and confirmed with CMR [3].

In this manuscript, we report a case of LVNC associated with two other abnormalities: bicuspid aortic valve and coarctation of the aorta. This case is important because this congenital disease is underdiagnosed and its prompt recognition is necessary to avoid further complications.

An asymptomatic 29-year-old male from Lima attended to a pre surgical evaluation for knee intervention, in our department. At physical exam, his vitals were: heart rate of 63 bpm, BP of 145/91 mmHg (measured in right arm), respiratory rate 14 breath/minute and blood oxygen saturation of 96%. The cardiovascular exam revealed a diastolic murmur in aortic area and diminished pulse amplitude in lower limbs. Therefore, BP was measured in left leg finding 100/60 mmHg. Due to described murmur and BP difference between arms and legs, there was suspicion of aortic regurgitation and coarctation of the aorta. 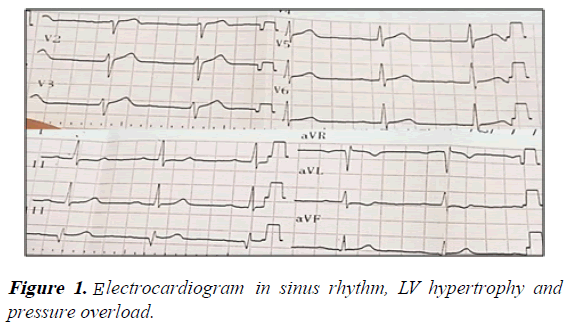 1) In the PLAX view we identified LV with mild enlargement and moderate hypertrophy (end diastolic diameter: 57.5 mm and end systolic diameter: 37.2 mm, IVSd: 13.5 mm). The aorta was dilated at the sinuses of Valsalva level (40.6 mm). Also, the aortic valve had severe regurgitation with an eccentric jet (Figures 2A and 2B). 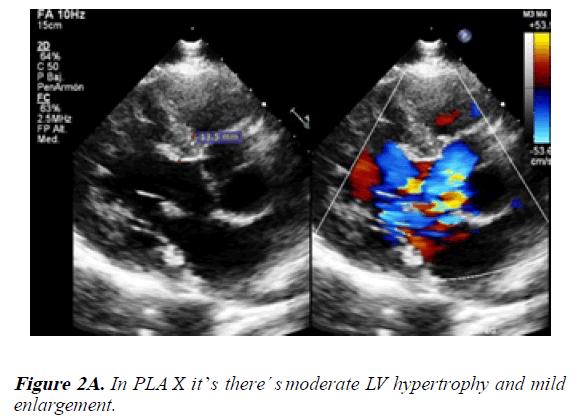 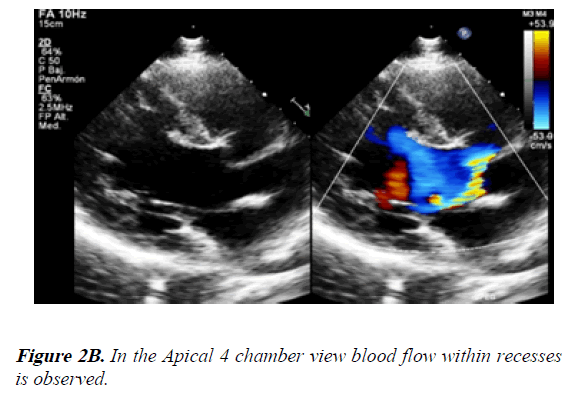 Figure 2B: In the Apical 4 chamber view blood flow within recesses is observed.

2) In the apical view it was possible to see blood flow within deep trabeculae and recesses (Figure 2C). 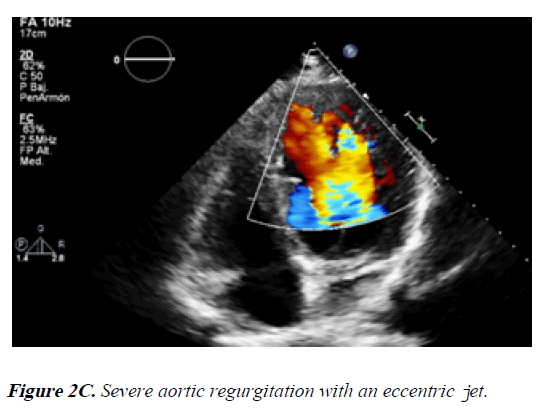 3) In the PSAX view the aortic valve seemed to be bicuspid due to fusion of LCC and RCC (anterior cusp in an AP phenotype). The NCC became the posterior cusp (Figure 2D). 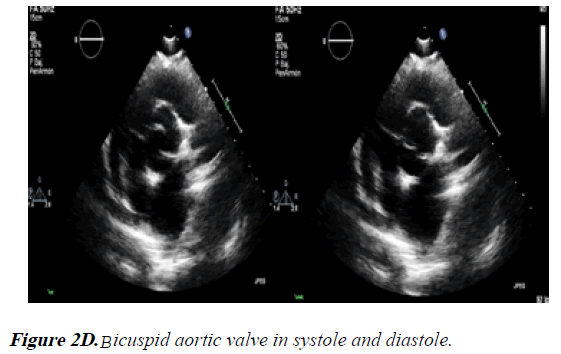 4) In the suprasternal view, there was a narrowing in the descending thoracic aorta suggesting coarctation of the aorta. The CT confirmed the previous findings: 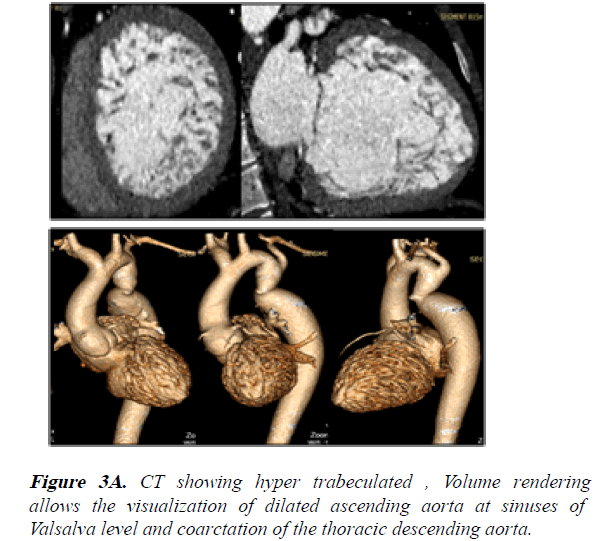 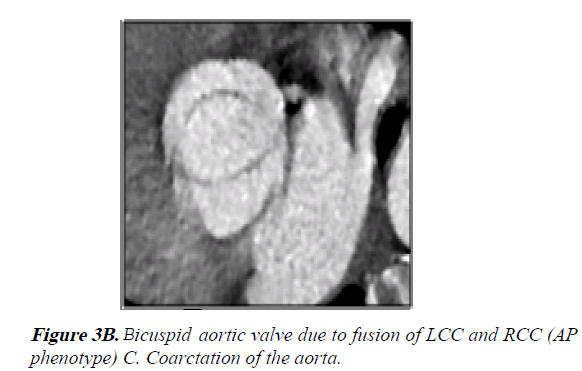 Figure 3B: Bicuspid aortic valve due to fusion of LCC and RCC (AP phenotype) C. Coarctation of the aorta. 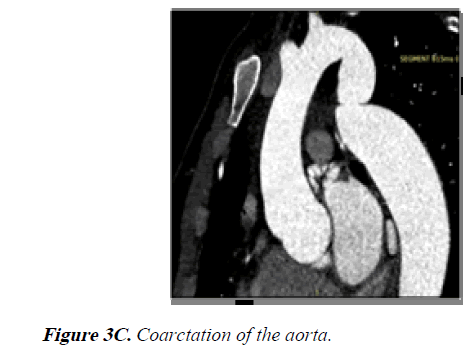 Figure 3C: Coarctation of the aorta. 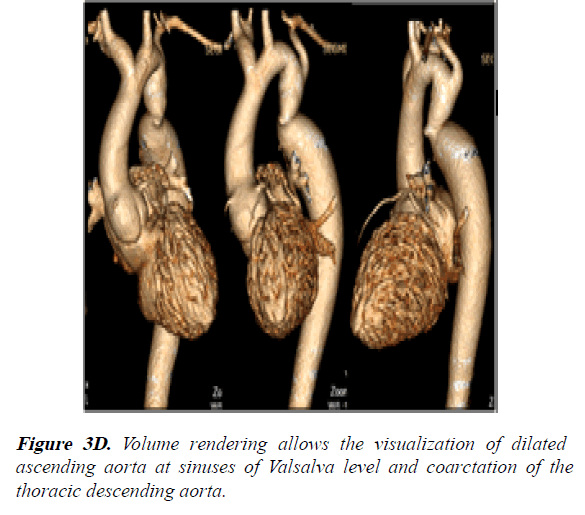 Figure 3D: Volume rendering allows the visualization of dilated ascending aorta at sinuses of Valsalva level and coarctation of the thoracic descending aorta.

2) Bicuspid aortic valve (BAV) AP phenotype with fusion of LCC and RCC through a raphe (Figure 3B).

3) The coarctation of the aorta measured 14 × 19.5 mm with a 38% narrowing relative to the aortic diameter at the diaphragm level (Figures 3C and 3D).

The CMR allowed us to make our final diagnosis because: 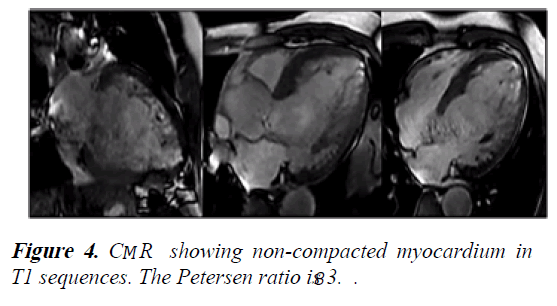 3) The maximum narrowing of the aorta at the coarctation was 12 mm.

After all the described workup process we concluded: left ventricular non compaction associated with bicuspid aortic valve and coarctation of the aorta.

We performed an exercise test (Bruce protocol) and the patient reached 7 METS. It was stopped because he had knee pain.

Left ventricular non compaction is an entity recognized for 80 years and is considered by European Society of Cardiology as a not classified familiar cardiomyopathy. Its presentation is isolated or associated with another abnormalities [1]. There are few reported cases associated with bicuspid aortic valve and coarctation of the aorta.

In current literature, there are some cases of LVNC with Ebstein’s anomaly, but there are few associated with bicuspid aortic valve or coarctation of aorta. The first one (LVNC and BAV) was reported in 2003 when Cavusoglu et al. described a 19 year-old-male with heart failure due to a severely enlarged LV with moderate impairment in systolic function (LVEF: 35%)[6]. In 2009, Wrigley et al. published another case of a 39 year-old-male with LV, BAV and aortic regurgitation, but the first one to undergo valve replacement surgery. He had a mildly dilated LV (end-diastolic diameter: 61 mm) and preserved systolic function, so he was initially medically managed. After 4 months of follow up, he had aortic valve replacement because of AR severity progression without variations in LV diameter or ejection fraction. The outcome was favorable [7].

An even more rare association is the one described for the first time by Myers et al.: a 15-year-old female with LVNC, BAV and coarctation of the aorta. She also had a subaortic VSD. Thus, the LV had severely enlargement and impairment of ejection fraction. This complex was called by the authors as Laubry-Pezzi syndrome [8].

Our patient had the association of LVNC, bicuspid aortic valve with severe regurgitation and coarctation of the aorta. None of the above cases mentioned before had a patient with these three features. Despite the severity of aortic regurgitation and mild LV enlargement (measured by TTE and CMR), the patient had a NYHA I functional class with preserved LVEF; thus, we decided medical therapy. This conservative approach was the same applied initially by Wrigley et al. [7].

Finally, the coarctation of the aorta had class I indication for intervention due to BP>140/90 mmHg (145/91 mmHg), BP difference>20 mmHg between upper and lower limbs (in our case was 45 mmHg) and significant LV hypertrophy detected by TTE (IVSd: 13.5 mm) [10]. Therefore, we decided for percutaneous intervention of the coarctation, medical therapy and clinical-imaging follow up. The patient received Enalapril 5 mg PO BID and Furosemide 40 mg PO QD. By now, he continues with that treatment, remains intervention.

The patient has certain features not reported before in current literature. That’s why we decided to publish this case. We’re completely sure that if this patient only had LVNC, he’ll never had his disease detected because most of LVNC are asymptomatic. The associated abnormalities (BAV with AR and coarctation of the aorta) made possible to identify and diagnose this patient, since it all started with just a murmur. We should emphasize the importance of an accurate physical examination and non-invasive images that that played a crucial role in this case. 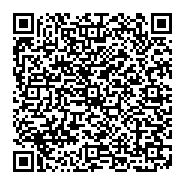