A survey was conducted to find out the diversity of reptilian fauna in Barkatullah university campus during two consecutive years from May 2015 to September 2016 which revealed the presence of 22 species of reptiles which belongs to 9 families. Five families (Agamidae, Boidae, Typhlopidae, Varanidae and Viperidae) contributed with one species each i.e. Calotes versicolor Gongylophis conicus, Ramphotyphlops braminus, Varanus bengalensis and Daboia russelii respectively followed by family Elapidae with 3 species; Gekkonidae with 4 species; Family Scincidae and Colubridae contributed maximum with 5 species each. The species viz., Hemidactylus brookii, Hemidactylus flaviviridis and Hemidactylus frenatus of family Gekkonidae were observed common while in family Colubridae Ptyas mucosus, Amphiesma stolata, Xenochrophis piscator and Oligodon amensis were found common. Calotes versicolor and Naja naja of family Agamidae and Elapidae respectively remained common in the study area.

Reptilian fauna has inhabited almost every corner of the world except the very cold regions yet they are declining around the world and anthropogenic activities like destruction of habitats is the main threat of their decline (Gibbons et al., 2000; Krauss et al., 2010; Manhas et al., 2016). They are facing much anthropogenic stresses as well natural devastation while still many of them are unknown; some are threatened while some are in the way of extinction. About 518 species of reptiles containing 03 species of crocodiles, 34 species of turtles and tortoises, 202 species of lizards and 279 species of snakes which belonged to 28 families have been recognized from India by Aengals et al., (2012) whereas from the state of Madhya Pradesh around 76 species of reptiles have been enlisted by Chandra and Gajbe (2005). The available information pertaining to Madhya Pradesh was found in the work of Smith (1935 & 1935). From the valley of Narmada around 21 species of reptiles were described by Kalalurasam et al., (1991) while 12 species of reptiles were enlisted from Indrāvati Tiger Reserve by Sanyal (1995). Rao (1998) described the distribution of 9 species of reptiles from Chambal River whereas, 19 species of snakes were reported from Pench National Park by Pasha et al., (2000) and 30 species of snakes from Malwa region of Madhya Pradesh by Ingle (2002). Manhas et al., (2015b) documented a checklist of snakes comprising 17 species belonging to 5 families from Bhopal district of Madhya Pradesh. Earlier from Barkatullah University campus 16 species of reptiles has been recorded by Manhas et al., (2015a). Researchers have been working in other fields since decades in Bhopal rather than reptiles. Thus very little information regarding reptilian fauna is available from Bhopal region of Madhya Pradesh. Thus it is worthy to provide a comprehensive information regarding reptiles to carry out further work in this field. So, it is necessary to study theses animal forms in order to conserve them in their natural environment. In this article we have presented an updated and annotated list of reptiles residing at Barkatullah campus.

The present study was conducted at Barkatullah University located in tehsil Huzur of District Bhopal (Madhya Pradesh). Geographically Barkatullah University (formerly Bhopal University) is positioned at latitude 23° 12' 01.83'' N and longitude 77° 27' 12.50'' E (Fig.1) having an average elevation of 500 masl. The area of the campus is spread in 360 acres (1.5km2) of land having variety of habitats including grassland to man-made ponds.

Reptilian survey was conducted for two sequential years (May, 2015-September, 2016) with an objective of providing a comprehensive and updated list of reptilian species residing at Barkatullah University campus with their local and IUCN status. Data collection was carried out by following visual encounter method involving turning rocks & logs, digging through leaf litter, and searching rat burrows and termite mounds. Besides this basking reptiles were also recorded along the higher vegetation trails, edges and stream sides. Individuals of the species were captured by hand (snakes were captured with the help of snake hooks). Opportunistic observations of any species in the study area were also recorded including road kills. 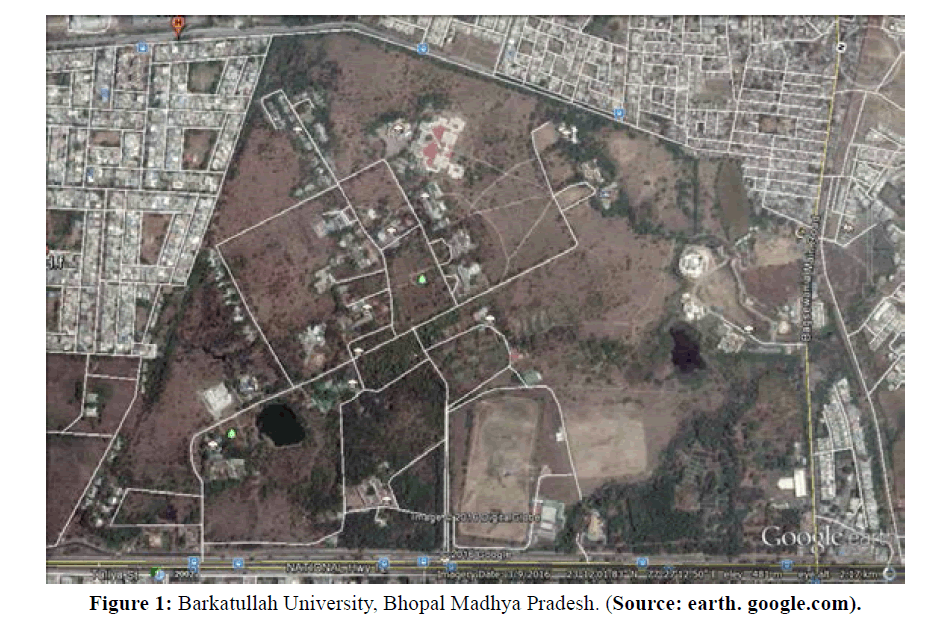 Morphological data of specimens was obtained for identification, which was supported by color photographs taken with a Sony HX-300 camera. Encountered specimens were observed photographed and identified using literature and field guide (Smith, M. 1935 & 1943; Daniel, 2002 and Whitaker, R and Captain, A. 2004) after confirming identification specimens were released back at same place.

In present investigation 22 species of reptiles under 9 families were recorded which signifies that the area of study is rich in reptilian diversity. The sighting of reptiles recorded during current study was witnessed when the average air temperature ranged from 15 to 30 °C. The species list has been presented in table 1 with their current IUCN status. The members of snakes and lizards were observed most active during the months of June, July and August after which they slowly show decline till next preferable conditions. Earlier while working on herpetofaunal diversity of Barkatullah University campus 16 species of reptiles was reported by Manhas et al., (2015a). While in present investigation we have compiled 22 species of reptiles which belongs to 9 families of two sub-orders (Serpents and Sauria) containing 11 species of snakes and 11 species of lizards. In this paper we have described 7 species of reptiles that was not recorded earlier viz., Eutropis cf. carinata, Lygosoma lineata, Lygosoma albopunctata, Naja naja, Bungarus caeruleus, Varanus bengalensis and Daboia russelii.

In present investigation we have found many cases of snakes killing. The main reason behind the killing of snakes was observed the lack of awareness in local residents (Nath et al., 2011; Dubey and Khare 2013; Manhas et al., 2015a ; Manhas et al., 2015b and Manhas et al., 2016). Conflicts of human-snake were observed more in the study area. Because of the unawareness, in most cases snakes were observed to receive more mortality’s between humans and snake conflicts as compared to other reptilians. Manhas et al., (2015b) reported that for conservation of reptiles; awareness is required in locals about their importance for maintaining ecological balance in the systems and conserve these species it becomes important to decrease anthropogenic activities viz., destruction of habitat, traffic control near vegetation (especially during night) and killings. Therefore we suggest mass awareness programs are needed to be initiated in order to make local community aware with reptilian fauna and about their necessities for a healthy and balanced ecosystem.